The Spread: Exchange Hall Brings Some Flavor To Downtown Dallas. 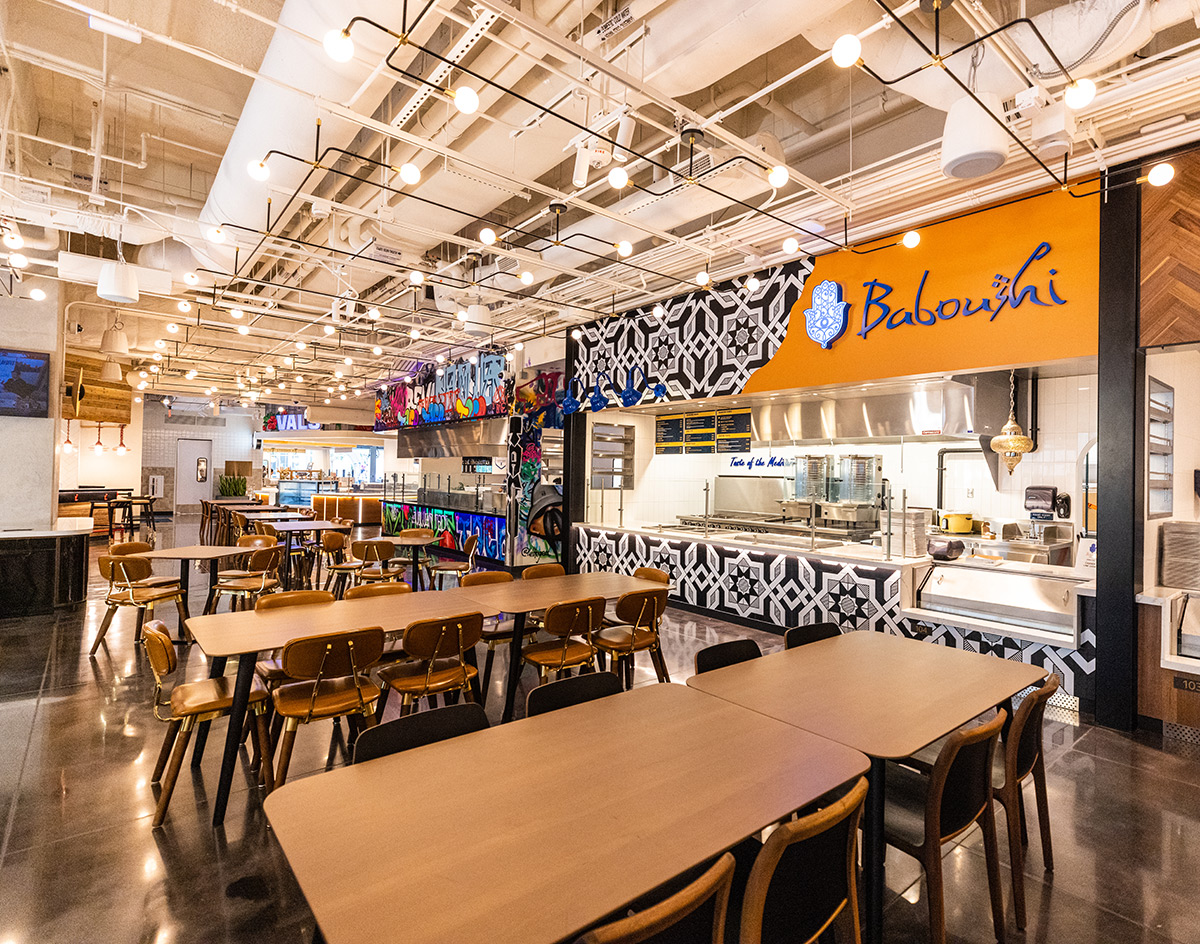 A Shiny New Food Hall Brings A Bevy Of Buzzy Concepts To Downtown Dallas All At Once, Wingstop Adds Thighs To Its Mix, Serious Pizza Hits Fort Worth & More.

It’s par for course that we use this space to let you know about various restaurant openings happening in and around Dallas. What’s not expected, however, is for us to share with you the news of multiple big-name local dining institutions all teaming up at once to form like Voltron.

But that’s exactly what’s happening this weekend at the AT&T Discovery District, which is finally making good on part of its $100 million promise to bring a food hall worth a damn to Downtown Dallas. This Friday, the flashy new entertainment destination welcome a new feature to pair with already established fixtures like Jaxon Beer Garden, its 104-foot-tall media wall and its alluring green spaces: The 26,700 square-foot catch-all known as the Exchange Hall.

Those are some head-turning participants! Plus, lest that weren’t enough, those offerings will surround a centerpiece bar concept called Double Tap that will sling cocktails — old fashioneds and margaritas included — on draft.

Basically, think of the Exchange Hall as Plano’s Legacy Hall — but hipper and newer, and without the burden of having to drive past I-635. The Downtown Dallas tunnel network could never.

Still, as hotly anticipated as all that is, it’s not the only new venture worth being aware of this week.

Those who live out by Love Field, for instance, should be hyped about On Rotation finally making its debut out that way after ditching its old location just south of White Rock Lake. On Tuesday, the brewpub finally took its bow in its new, substantially larger location at 7701 Lemmon Avenue. Part of the way they’ll be embracing the new space is by adding food offerings — something the old spot never had. Helming the kitchen is Devin McFarland, previously of The Sheraton Dallas, Lucia and Top Knot. Expect gluten-free fried chicken, a varied slate of sandwiches and traditional brewpub staples to go with an eclectic offering of beers.

Uptowners, meanwhile can rejoice about the arrival of the approachable Plano-launched Haywire concept. After months of teasing its opening, the elevated American fare joint also formally opened its doors for business on Tuesday.

Of course, it doesn’t get any more American than the Dallas-launched Chili’s brand. But if chicken crispers are too low-brow for you, maybe this will pique your interest: As the Dallas Morning News reports, Chili’s founder Larry Lavine, who previously opened Ten50 BBQ in Richardson some seven years ago, has a new barbecue spot in Grand Prairie called Loop 9. Yes, you can expect baby-back ribs.

Also switching up the chain restaurant expectations is the Dallas-based chicken wing giant Wingstop, which announced a new sibling restaurant called ThighStop this week. Per the DMN, the new venture isn’t really a split from WingStop’s model so much as just an extension in which current Wingstop locations will also serve chicken thigh offerings of their beloved flavor options.

Speaking of beloved, here’s a surprising turn of events: Luby’s isn’t going out of business after all. Following earlier reports that your grandmother’s favorite early-bird destination was on the outs, the Dallas Observer reports that a new investor has arrived on the scene to save the brand from extinction and keep all 32 of its current Texas locations open.

If basic shit like that gets your blood pumping, then you’ll also be hyped to learn that the North Carolina-based fried chicken brand Bojangles is making its entry into North Texas soon. As CultureMap notes, the chain that dominates the American Southeast will soon be slinging its wares in Tarrant, Dallas, Denton and Collin counties.

Meanwhile, the Deep Ellum-sprung Serious Pizza brand is making good on its own promises to expand following its acquisition by Milkshake Concepts  (Stirr, Vidorra) by making good on its promise to open a second location in Fort Worth. If pizzas big enough to serve as a table float your boat, head over to their new 3,029-square-foot space on West 7th Street to indulge.

Or, back Dallas way, if you’re curious as to what a Mexican-inspired pizzeria has to offer, you can check out Nico’s MX Pizzeria this fall. As CultureMap notes, the new spot located at 18160 N. Dallas Parkway will be doing what it can to blend taco and by-the-slice culture by using salsa verde and Mexican-style cheeses one its pies.

Highland Park, on the other hand, will also be getting a unique new pizza spot: As Eater reports, the folks behind Hudson House and Drake’s are opening up a spot called D.L Mack’s that will serve thin-crust Chicago-style pizzas. It ain’t deep dish, but it’s something!

You gotta take what you can get, right? The team at Happiest Hour in the Harwood District can no doubt relate, as their over-the-top nacho plate went super viral on TikTok this week for its audacious volume, per the DMN.

Speaking of viral: The DMN also notes that the Rockwall “eater-tainment” spot known as Shenaniganz (really) got some social media love of late for promising not to serve some of Dallas Mavericks fans’ most hated NBA players. Seems this establishment won’t allow DeAndre Jordan, Rajon Rondo or Lamar Odom on its property — as if they were just dying to get in.

Even regular folks like you and I will have trouble getting into Jimmy Park‘s new Shoyo concept on Lower Greenville. The former Nobu, Pok the Raw Bar and Nori Handroll Bar‘s new omakase sushi spot only has 12 seats inside total, but the D Magazine crew is still all about its potential now that it’s officially open as of this week.

Former Top Chef contestant Tiffany Derry also is finally doing things her own way, too: Her new Roots Southern Table spot is now open in Farmers Branch, and the team at PaperCity thinks its comfort foo stylings too are worth your while.

Lastly this week, a bit of sad news: Per the DMN, Wanda ‘Fernie’ Winter — colloquially known as the “Funnel Cake Queen” of the State Fair of Texas — passed earlier this week after a lifetime spent sweetening up fairgoers’ annual laps around Fair Park. She was 95 years old.