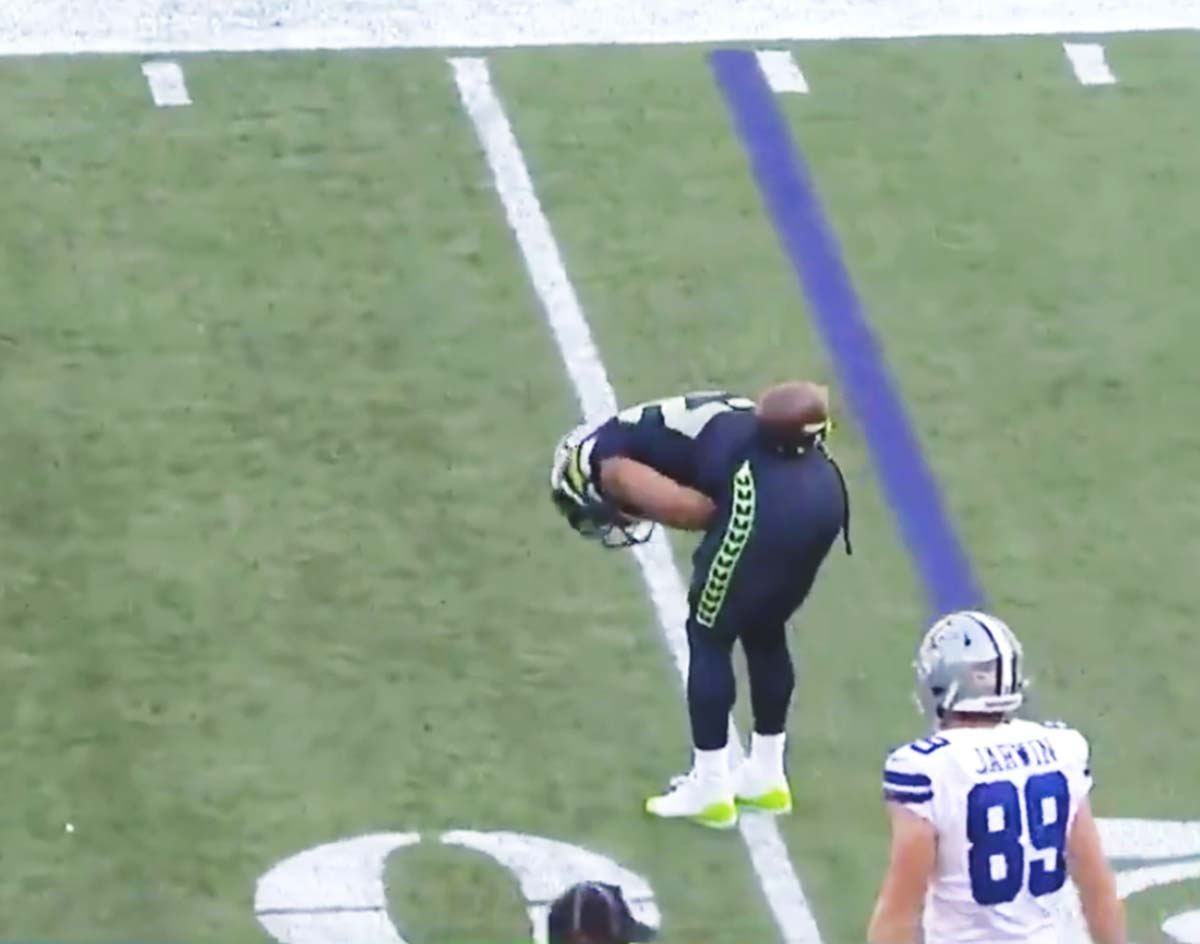 Four Reasons Why The Dallas Cowboys Weren’t Able To Get Anything Going During Sunday’s 24-13 Loss To The Seattle Seahawks.

Coming off their first win of the season last week — an impressive performance against the hated division rival New York Giant — the Dallas Cowboys traveled to Seattle’s thunderous stadium this weekend to face a depleted Seahawks squad.

So, sure, heading into Sunday afternoon’s game, there was reason to believe that the Cowboys’ momentum, from Week 2 would carry over into Week 3.

But that didn’t take tradition into account. Fun fact: Since Pete Carroll took over as its head coach in 2010, Seattle hadn’t lost a home opener heading into its face-off with the Cowboys.

And, yes, the same was true after the game, too.

Urged on by the cheers of its famously loud 12th Man crowd, Seattle was in control throughout Sunday’s entire game. No matter what the Cowboys did, their efforts continuously fell short as the team repeatedly stepped on its own feet. Penalties and blunders — like Ezekiel Elliott’s fumble after a 26-yard run that was desperately needed at the time — abounded.

Even worse? The deeper the hole the Cowboys found themselves in, the more they forgot their so-called offensive “identity” of just bowling their opponents over with a stout running attack.

So much for any positivity from Week 2 lingering.

Here are four reasons why this Cowboys team came up short on Sunday.

A predictable offense. Another week, another spate of plays that fans have seen a million times from this offense. If we find this laughable, just imagine how the guys getting paid millions to stop these plays must feel about them. I really don’t understand what’s going on with this team’s offensive play-calling and. Is it stubbornness? Fear that the team’s offensive players can’t handle a bigger playbook? Whatever it is, something’s gotta give. This team keeps lining up like its a 3A high school team, scaring absolutely no one on the other side of the ball. There’s also no threat that Dak Prescott might stretch the field through the air, either. We’re three games into the 2018-2019 season, and the dude hasn’t passed the 200-passing-yards mark. Worse, he’s failed to pass that milestone in 10 of his last 12 starts. If the answer isn’t looking for a replacement at QB1, then the team needs to at least make sure Elliott is being fed the ball more often than he currently has been. His 16 carries for 127 yards on Sunday is a great average. But it’s also just four carries per quarter. Why is it that offensive coordinator Scott Linehan only digs in about handing the ball off to him once games are out of reach? If you have one of the best rushers in the league, you don’t resign to using him in garbage time situations only. If anything, that’s when you shouldn’t be using him!

Offensive line struggles. This offensive line is missing Travis Frederick way more than we expected it would — and it’s not like we weren’t worried about it to begin with. Clearly, there are some glaring holes in this unit. The biggest one is at guard, where rookie Connor Williams has struggled in some particularly costly moments. On Sunday, the line struggled to keep Prescott upright, leaving him to be sacked five times over the course of the game. It’s a nasty cycle: Prescott gets sacked; the offense gets put in tough down and distance scenarios; offensive possessions get cut short; and the defense, this team’s strength, is weakened by having to stay on the field for impossible lengths of time.

Ol’ Noodle Legs is up to his usual tricks. Sean Lee sat out the entire second half of the game on Sunday. Wanna guess the reason? Yep, it was his hamstrings. Seems the two-time Pro Bowl selection has been bitten by the injury bug once again. On the plus side, the team didn’t look too lost without its usual anchor in the game —  second-year backer Jaylon Smith and first-round rookie LB Leighton Vander Esch each played well in his stead — but they obviously would’ve performed even better if their undisputed leader were on the field alongside them. Alas, Lee hasn’t played all 16 games in a season even once since entering the league in 2010. This year doesn’t seem like it’ll be any different.

Earl Winty Thomas III. Since Thomas’ unorthodox meeting with Jason Garrett in Week 16 last season, headlines have for months placed the Cowboys as the likely place where the unhappy-in-Seattle safety might end up. The 29-year-old regular Pro Bowler has made it clear he wants to play in Dallas. And, on Sunday, he showed why this team could really use him. Dude was just all over the field. It was as if every big play happened because of him! He picked off Prescott twice — and both times in acrobatic fashion, with one interception coming because he pinned the ball between his hand and leg. Oh, and he also added seven tackles to the box score. With the Chiefs and Packers now reportedly in trade talks for Thomas too, the chances of him landing in Dallas now seem slim to none. That’s borderline tragic: Thomas is definitely still a major factor on defense, and pairing him with Dallas’ young corners — and his old secondary coach — would be a game-changer. That much is now obvious.

Next week, Dallas hosts the Detroit Lions. How are they playing this year? Well, they just beat the New England Patriots on Sunday Night Football. So, yeah, Week 4 isn’t exactly looking like a gimme it appeared to be before the season started.