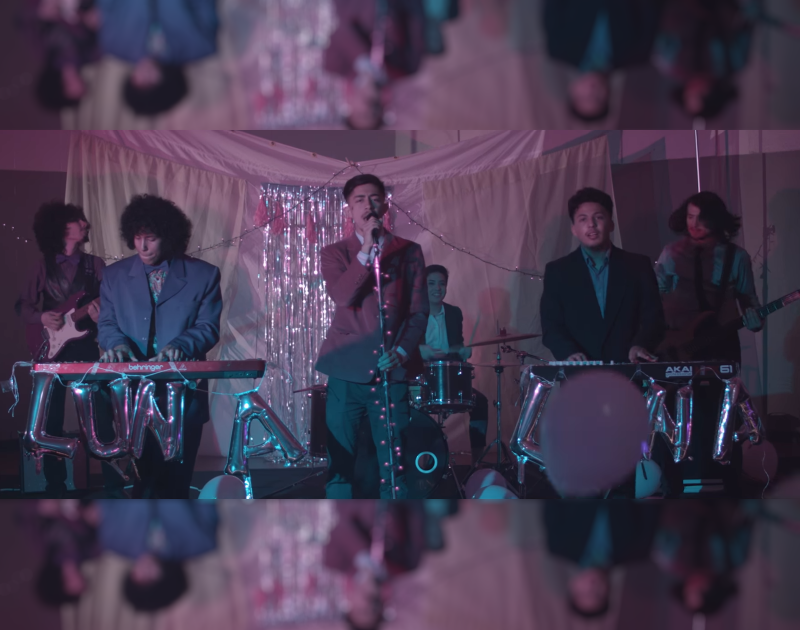 Paul Cauthen — Have Mercy
RIYL: Making it look easy to be a saint in the city.
What else you should know: The tall Texas baritone follows up an LP called My Gospel with an EP that’s somehow even preachier. “I’m a singer not a preacher, but these songs are my sermon,” says the well-documented grandson or a preacher in the material promoting this release, which we’ve been anticipating for some time. “We’re ripping each other apart out there, and forgiveness and mercy are what’s going to get us through. I want to use my voice the best I can to spread that message while I’m here on this Earth.”

Luna Luna – “Fierra”
RIYL: Baila en la calle de noche.
What else you should know: This indie group released a full-length back in February, and yet here it is again, already releasing another new single — and a fire one at that. Classical guitars and a reggaeton beat underscore this fun-as-hell new jam. We imagine it’s impossible to listen to this and not shake one’s hips — even when you’re a nerdy, middle-aged dude sitting in an office chair dutifully typing away at the ol’ laptop. And you know my hips don’t lie!

Gavin Guthrie — The Totality
RIYL: Physically turning knobs.
What else you should know: The Texas Recordings Underground label head, also known as TX Connect, is gearing up to put out his sophomore album via Medical Records. The analog electronic album will be made available as a double vinyl through the Seattle-based label in July. You can order it here. For the full scoop, on the release, head to Resident Advisor.

Static Diary – “UFOs”
RIYL: Having patience for the ride.
What else you should know: Scott Danbom is one of those weighty names in the local scene and beyond. His time with Centro-matic and as a sideman to Sarah Jaffe has done much to cement that legacy. For a musician so lauded, and whose bio mentions decades of songwriting experience that began with grade school composition contests, the first taste of his very long-awaited solo debut is somewhat anticlimactic, we gotta say. It’s a pleasant enough ditty, sure, but nowhere near the showcase of his undeniable keys prowess that we’ve seen him show off in countless settings previously.

Buffalo Black — Be Like Water
RIYL: Being deep.
What else you should know: The Dallas rapper has been dropping singles from his third LP for many, many months now. Finally, the full thing is now out and streamable. It falls in line with his earlier works, poignantly taking on issues in the black community and dropping zen-like bits of wisdom. Much of that attitude, including the title of the record, comes from the rapper’s hero, Mr. Bruce Lee. So goes that famous old quote from the martial arts legend: “Don’t get set into one form, adapt it and build your own, and let it grow, be like water. Empty your mind, be formless, shapeless — like water. Now you put water in a cup, it becomes the cup; You put water into a bottle it becomes the bottle; You put it in a teapot it becomes the teapot.”

Giant of the Mountain — Nature’s Wraith
RIYL: Frequent tempo changes.
What else you should know: From the black depths of the abyss comes the heavy Dallas DIY outfit Giant of the Mountain. Formerly a trio, the technical metal band has been performing as a duo on its current tour. Maybe they’re looking for a new bassist? If you like what you hear, maybe pester them on Twitter until they give you an audition. Hey, it could work!

Bryce Bangs – “Taking a Ride”
RIYL: Living in the moment.
What else you should know: On the third single from his forthcoming sophomore record, the fuzzy Dallas blues rocker continues channeling the same Black Keys’ El Camino vibe we’ve mentioned him following before — although this time he’s adding in big harmony vocals akin to Jonathan Tyler & The Northern Lights, who Bangs has cited as one of his biggest influences in putting pen to paper.

Demi Lovato – “Sober”
RIYL: Brutal honesty.
What else you should know: The story behind Lovato’s chart-topping 2015 LP was her overcoming of a number of addictions and issues (read: booze, coke, an eating disorder) and a newfound confidence in her own skin. Here, on her newest single — and not too long after celebrating six years of sobriety, mind you — the mood is a drastic shift. It’s a sorrowful apology for a recent relapse: “To the ones who never left me, we’ve been down the road before / I’m so sorry, I’m not sober anymore,” she sings in the hard listen. Later. she offers up the only-slightly-more-hopeful following couplet: “I’m sorry that I’m here again / I promise I’ll get help.”

Jason Eady – “Always a Woman”
RIYL: Lady troubles.
What else you should know: The first tune Eady wrote for his upcoming record, he recently told Billboard, was based on a bad night out in Dallas. “A friend was in Dallas earlier last year and we were all hanging out,” Eady says. “We were having a bad night and my wife (singer Courtney Patton) asked him, ‘Is it a woman?’ He said, ‘It’s always a woman,’ so I wrote that down.” For more info on Eady’s record, check out last week’s column.

Lit Vicious — “Who the Fuck is Lit Vicious??”
RIYL: Unfortunate coincidences.
What else you should know: Who is Lit Vicious? Indeed! Is it a Dallas DJ, birth name of Jocelyn Flores? Is that kind of confusing because that’s the same name as the titular character, known for committing suicide, in a song by the recently killed XXXTENTACION? Is it easier to just go with it and listen to the tune above? Yeah. Also, how is a dead girl gonna be releasing songs? C’mon!

Flower Child – “Melanated (Juicy Mix)”
RIYL: Being a digital girl in an analog world.
What else you should know: I’m not sure if this tune was intended as a continuation of Erykah Badu’s Mama’s Gun track “…& On,” which mentions a flower child and uses the lyrics “Bling bloom bling, melanated,” but that’d be a fitting narrative in any case. All roads lead back to Badu eventually, don’t they?

Oh, Weatherly – “Here Tonight”
RIYL: Your high school yearbook photo.
What else you should know: Last fall, this young Dallas band announced signing with Hopeless Records, the label home of such as Circa Survive, Bayside, Avenged Sevenfold and All Time Low. Next month, the band releases its debut for the label, Lips Like Oxygen, co-produced by Jake Bundrick of Mayday Parade. This is its lead single.

Adrian Stresow – “It Could Be Worse”
RIYL: Looking at the bright side.
What else you should know: The 19-year-old, self-taught producer and rapper has already released a number of projects in his short career. Here, in heavily AutoTuned fashion, he begs to be thought of as more than just a rapper. That does seem to be his strongest suit, though.

Tarif – “Doubts”
RIYL: Doing better than expected.
What else you should know: Like that Flower Child track above, this is a debut single of new Dallas rapper Tarif. And he’s off to a strong start. Sometimes, he falls short of expectations. Other times, like on this fiery first effort, he surpasses them.