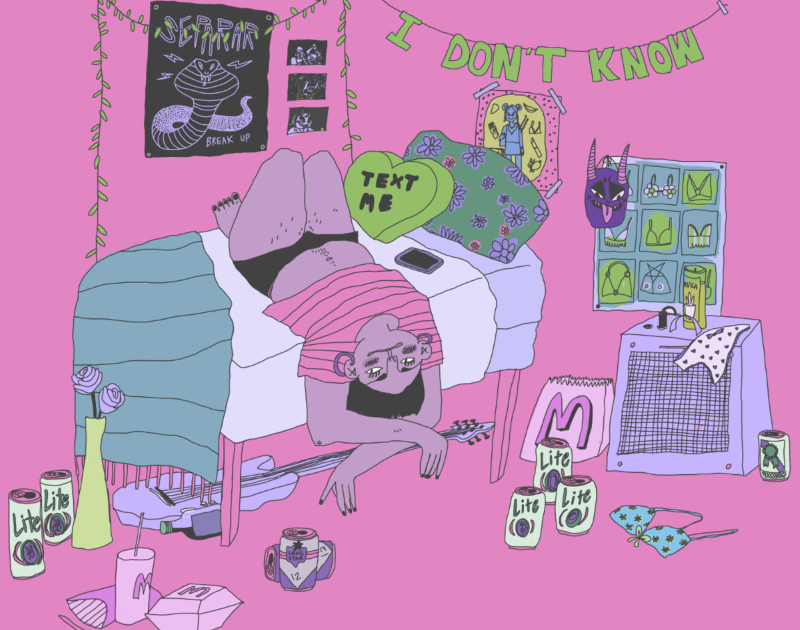 Omicron J Trauma – “Good Conversation.”
RIYL: Being young, having fun.
What else you should know: One of KXT program director’s favorite bands? The young power pop trio Omicron J Trauma. “They don’t have a lot of songs yet, but I just think that they’re great songwriters and a fun band,” she once quipped to the Observer. Well, now they have two more fun jams that meld the ’80s new wave and ’90s alt-rock movements. And, apparently, enough other songs to fill up a whole live set. You can catch them doing just that tomorrow night (Saturday, May 26) at Dallas’ Twilite Lounge.

Daniel Markham — Hyperspeed.
RIYL: R.E.M.
What else you should know: Not a single one of Markham’s new tunes clocks in at three minutes. More exact, the album is 14 tracks that fly by in a scant 29 minutes. That’s not to say they’re all barnburners – although there are a few! – but, overall, it’s a bit of a new direction for the oft-gloomy mid-tempo rocker. Even the slower tunes come off a bit more Grandaddy than R.E.M. this go ’round, which this robot definitely isn’t sad about.

Jake Schrock – “Cosmic Ocean.”
RIYL: Strange things.
What else you should know: Thank the tastemaking blog of yore Gorilla vs Bear for premiering this track earlier this week. And thank the S U R V I V E dudes for signing the Dallas ambient electronic artist to its Holodeck roster and releasing his debut LP to the masses. It comes out July 27. You can read more about Schrock and his relationship with the Stranger Things composers here.

Paul Cauthen – “Resignation.”
RIYL Men in black.
What else you should know: On the second single from Cauthen’s forthcoming Have Mercy EP, the grandson of a preacher man continues playing up all those Johnny Cash comparisons we’ve all no doubt made by now. “I’m a singer not a preacher, but these songs are my sermon,” says Cauthen via press release.”We’re ripping each other apart out there, and forgiveness and mercy are what’s going to get us through. I want to use my voice the best I can to spread that message while I’m here on this Earth.” The message of this one is to quit your jobs and go get drunk, because life is too short to keep grinding away at an office you hate – especially if you’re the president.

FlexinFab — “Everything U Do.”
RIYL: Internet wave.
What else you should know: Per this recent article in The Fader, “Nawf Dallas’ Flexinfab is doing something few other rappers can do: melding the uber-new school internet wave with Texas’ hip-hop past time of freestyling a la Lil Flip and the Screwed Up Click. Flexinfab’s discography runs deep with numerous mixtapes and Soundcloud loosies that find him experimenting with Autotune, 8-bit and emo with an undeniably Texas stamp.” It’s all lighthearted and innocent enough to jump on right away, but as the same article also points out, just when you’re lured in by its perceived naivety, he’ll “drop an impactful line that’ll hit you right in the feels.”

Lil Lotus — “Pretty Thing.”
RIYL: Turning over new leaves.
What else you should know: Hailing from Dallas, Lil Lotus is a former Christian metalcore frontman turned autotuned pop sensation. His current project falls somewhere between the delivery of his emo-singing past and the more Post Malone end of the spectrum. There are worse things than being compared to the biggest thing in hip-hop. Whatever you call it, it seems to be working: Dude has been on tour all month opening up for Senses Fail.

EMOtional Xan — “Nosferatu.”
RIYL: Wearing your emotions on your sleeve.
What else you should know: Similar to Lil Lotus, Xan attempts to find a middle ground between the emo and hip-hop worlds. He takes it a bit of a different direction, however, rapping a bit more and mixing in harder-edged – albeit lo-fi – beats. Hear more of his new record here.

Herrick & Hooley — “Right Here (Waiting For You).”
RIYL: The late ‘80s.
What else you should know: Following in Monica’s footsteps, H&H pay homage to Richard Marx’s Grammy-winning No. 1 1989 hit “Right Here Waiting.” From there, they put a synthy-spin on it that Hall & Oates would love, and run it through the ever-dependable Autotune to drag it into more modern times.

The Bralettes – “IDK.”
RIYL: Waiting, waiting, waiting, waiting, waiting by the phone
What else you should know: This band likes to position itself as body positivity champions, frequently performing in its namesake garment. But to pigeonhole them as just that would be a pretty big oversite, and no small injustice. The up-and-coming lo-fi garage rockers are ones to watch. There’s a melancholy-yet-hopeful tone a la early Best Coast that’ll surely have them in heavy rotation come the summer.

Breakfast Santana — Forever 29.
RIYL: When things are so smooth.
What else you should know: Carlos Santana, Juelz Santana, Breakfast Santana, B-b-b-b-bananas. Her 2017 single “Baggage” has racked up over 200K e-spins on Soundcloud in the past seven months. This four-song EP is a worthy follow-up, full of slick rhymes and solid beats. It’s got heart and it’s real, because it’s so smooth.

Son of Stan – “Deez Daze.”
RIYL: Pool party vibez.
What else you should know: Good to see Mr. Richardson ain’t too busy with his still-pretty-new Schlomi Bagdadi project to pump out new SoS jamz. It’s like an every other summer tradition around these parts. Before taking a Wonka’s Wonderous Boat Ride turn there at the end, it follows those tried and true pool party soundtrack vibes he’s most known for. Not coincidentally, he’s throwing a raging pool party out in the Fort next month, too.

Boome — Fuck Kanye.
RIYL: The old Kanye.
What else you should know: Kanye’s done lost his mind. But without the opportunity this TMZ staffer had to call out Ye to his face about how shitty and destructive his “slavery was a choice” comments were, Boome had to release a concept EP to get all the vitrol off his chest. In Boome’s own words: “I feel like Kanye’s words as of now are destructive and belittle the black community. I feel like his success has put him out of reach to care about the common black experience in America. Supporting someone that has a whole agenda on hate for your people is dangerous. Someone that promotes bigotry, classism, and racism.”

The Holophonics — Phantom Arrival.
RIYL: Upbeats.
What else you should know: A line from the Denton ska band’s press release that stood out indicated that this is its sixteenth album, and third of original songs. And now I must go back and find them all. Pop punk? Good. Horns? Good. Oh, no! Do I like ska?!

Cole Beasley — The Autobiography.
RIYL: All three phases of the rap game.
What else you should know: With the surprising release of his new rap album, the Dallas wide receiver joins the ranks of Troy Aikman, Deion Sanders and other Cowboys that have tried their hands at the music biz. Weird as it sounds, he’s actually pretty decent. He’s won over Vanilla Ice, anyway.

Matt Swagnew — Better Version of Myself.
RIYL: Doing everything better.
What else you should know: The boss man’s been hyping Swagnew for a minute, but he didn’t have to twist my arm too hard about including this one. The entire album is an impressive and fully thought out project top to bottom. It knows exactly what it is. His delivery is supremely confident. The lyrics aren’t just clever (I mean, they are clever) but they also have something to say. It speaks to much more than the let’s-go-out-and-party/it’s-all-about-tonight jams exclusively heard on pop radio today, though they could just as easily be mainstream hits just the same.

Yella Beezy & TrapBoy Freddy “Who Run It” (G Herbo Remix).
RIYL: The word on the street.
What else you should know: Beezy’s the kind of rapper you can read about being virtually unknown north of I-30, but also find mentions of him in The New Yorker and Billboard. So one has to think he’ll start catching on north of the border sooner than later. Here, he and fellow hot South Dallas street rapper Trapboy Freddy get the assist from hot Chicago street rapper G Herbo with re-re-re-remix. Air horn sound.

Ben Hixon — Body & Brain EP.
RIYL: The most current arithmetic.
What else you should know: He’s not just the Dolfin Records head and Josey Records clerk, he’s also a musician in his own right. He put out this limited edition 7-inch about a month ago which – hey, we’re just going out on a limb here – we’re guessing is available at a certain Farmers Branch record shop.