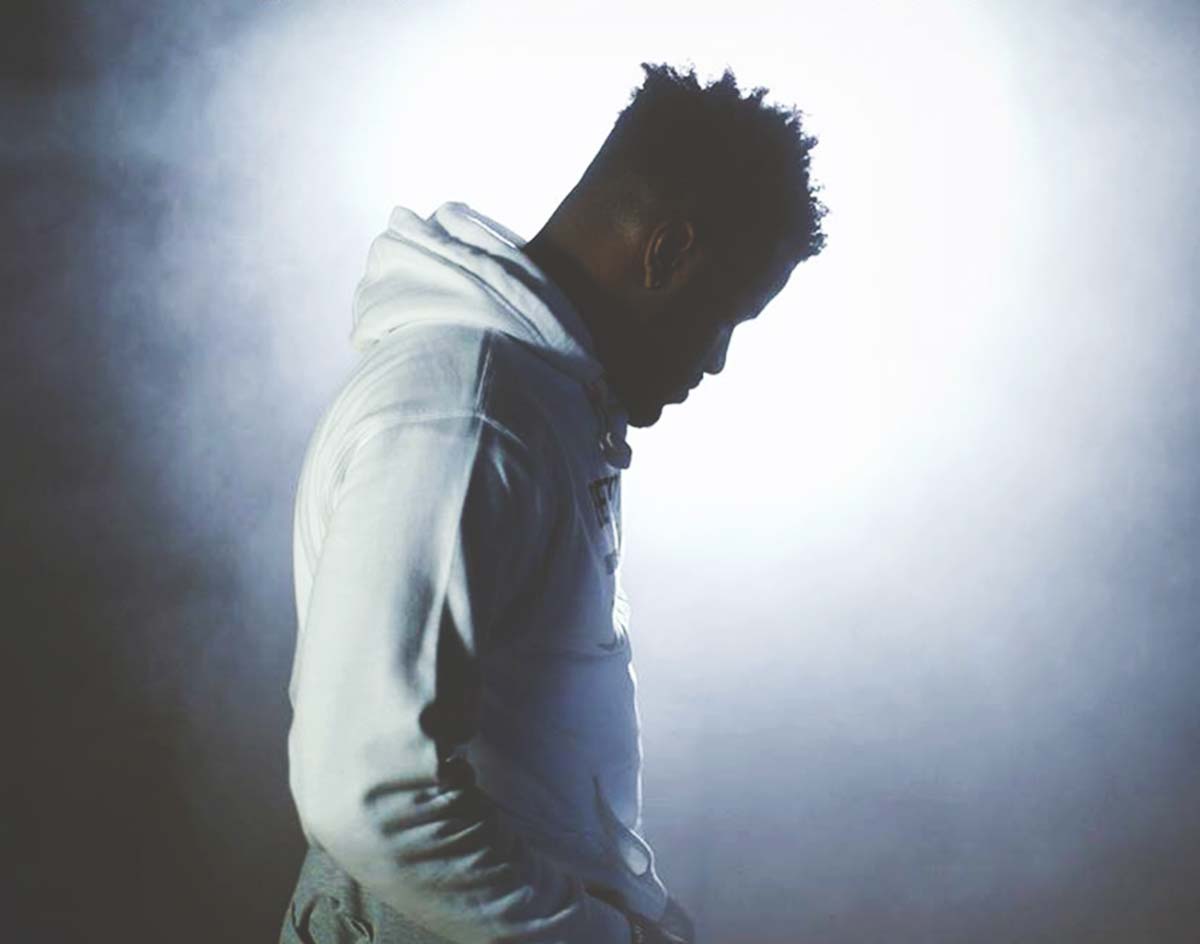 Matt Swagnew — “Point Guard”
RIYL: Ballin’.
What else you should know: We were woefully unfamiliar with Matt Swagnew just two months ago. Now we can’t get enough of his clear and confident delivery, his sly knack for subtle earworm hooks and his penchant for clever wordplay in his verses. His upcoming Better Version Of Myself LP is fast becoming one of our most anticipated releases of the year, and this new NBA All-Star-referencing track only adds to our excitement — and not just because it’s playoff season, either. Over the course of his now three pre-release singles, it’s becoming increasingly clear that Swagnew has a real strong sense of what kind of artist he is — and, perhaps more important, what kind of artist he isn’t. And, in a city where too many artists are trying to sound like someone else, that’s one incredibly appealing trait.

B. Anderson — “Average”
RIYL: Remembering the difference between the mean, the median and the mode.
What else you should know: After opening with a drum beat that implies that this latest offering from Arlington’s B. Anderson is going to venture into boom-bap territory, producer Super Miles throws a curveball and serves up a supremely tasty, sun-warped synth soundscape that recalls The Great Chillwave Explosion of 2009. Props to B. Anderson for offering up a flow that embraces the song’s laid-back vibe, and props to Donnie Domino too for giving Anderson’s vocals a bit of a classic vibe while mixing the vocals. So much of this track feels like a throwback, really. More impressive, though? It also feels remarkably current.

Paul Cauthen — “Everybody Walkin’ This Land”
RIYL: Coming here to kick ass and chew bubblegum, but finding out that you’re all out of bubblegum.
What else you should know: Ain’t no one around these days with a voice like Cauthen’s, which immediately provides a real gravity to anything it touches. This song, which calls out pretty much everyone and encourages them all to change, is the first taste of the performer’s new Have Mercy LP, which is due out on June 22. It also finds the gospel-country singer leaning far more toward the preacher end of his sonic spectrum. Except, y’know, Cauthen’s not a regular preacher, he’s a cool preacher.

Buffalo Black — “Blackout”
RIYL: Short-term memory loss.
What else you should know: The rapper born Jamil Kelley has long shown a proclivity for cinematic, dramatic songscapes, and this new one that finds him working with producer Kavern once again fits that bill. But also, hey,, there’s whistling incorporated into the mix this time around! The first single off the his upcoming Be Like Water LP has an urgent feel that falls nicely in line with the Spike Lee-approved rapper‘s earlier offerings. Plus, there’s a refrain in it that reminds me of this classic Lisa Lisa cut, and that’s never a bad thing.

Cygnus — ne0 ge0 EP
RIYL: Archaic gaming systems.
What else you should know: The under-heralded Dallas electronic music producer born Phillip Washington offers up four new songs on this new EP for the Croatia-based Barba Record. The title track stands out in particular for what appears to be the use of a vocoder, which is a bit of a surprise inclusion for Cygnus. The opening “Zone Shifting” and closing “Astronoot” songs feel far more in the traditional, melodic Cygnus wheelhouse.

Troy Cartwright — “Gettin’ Around It”
RIYL: Ignoring your GPS.
What else you should know: It’s been two years since we’ve heard any new music out of Troy Cartwright, who appears to have headed to Nashville to pen his latest collection of tracks. “Gettin’ Around It” seems to be the tip of a whole new sonic iceberg, and it’s certainly a welcome re-introduction to Cartwright’s songwriting talents, which elevate the winsome charms of his radio-ready appeal to something greater and more quote-unquote authentic. That’s the case here, too: Big, small, dirty or pristine, it’s tough to imagine a stage on which Cartwright would look out of place performing this song about navigating life’s pesky detours.

Pat Ron x Lil Sega — SegaRon EP
RIYL: Passing around a blunt and firing up the console.
What else you should know: Two of the city’s more talented (if wholly drug obsessed) emcees team up here for this surprising new three-song EP, in which the mostly laid-back barbs they trade are wholly heightened by the three horrorcore-influenced beats provided by producer AALLGODDD. Booming and massive, these beats would make anyone sound intimidating. In the hands of these two young talents, they’re provided a weed-laced appeal that rounds out some of the harsher edges.

Medicine Man Revival, Texas Gentlemen & The Gritz — “Breakthrough #Dtownhump”
RIYL: Collaborations, mostly. But, also, references to Dallas’ music history.
What else you should know: On May 5, three extremely noteworthy Dallas acts will join forces for a bill at the Granada Theater. In advance of that show, all three acts on the bill teamed up for a new song that’s been named for an old Dallas drum beat. It’s undoubtedly cool to hear three disparate acts — one that focuses on country and funk, one that keeps things R&B and jazzy, and a third that melds hip-hop and gospel — come together for such a cohesive sound as they do on this song and certainly will on the night of their show. Make no mistake: This blend is the Dallas sound. Yes, warts and all, even: The voice you hear on this song’s “Hit ’em with the D-Town Hump!” refrain — which indeed adds a certain something to the proceedings — belongs to Dallas musician Picnictyme, who has been facing public allegations of abuse of late and was removed from the May 5 bill at the Granada in the wake of those coming to light. It’s worth noting that Central Track was once slated to present this lineup as part of our site’s sixth birthday celebrations, but we are also no longer associating with this show, acquiescing to the requests of the performers who asked that, in the wake of our coverage, we help them make sure this night “keeps its focus on the music.” We will instead announce a new, entirely separate event for our anniversary celebrations soon. Lastly, a final note: We’re really not sure what to make of it, but it feels worth pointing out that the D Magazine story that premiered this song earlier this week referenced neither Picnictyme’s involvement in the recording nor the publication’s piece from the week before, which was the first to report on the allegations being made against him.

Charley Crockett — Lonesome As A Shadow
RIYL: Spinning yarns.
What else you should know: Sometimes, I’ve gotta admit, I find myself wondering if the Charley Crockett origin story isn’t a little too perfect. I mean, think about it: If you were to create a throwback blues and Americana performer from scratch, wouldn’t your chosen backstory sound a whole lot like the one claimed by Crockett, an apparent descendant of The King of the Wild Frontier who spent his young adult life hitchhiking and train-hopping across the country and busking in the streets of New Orleans before making his way to Dallas and, eventually, to Austin? It absolutely would, which makes accepting his considerable talents at face value (or even affected lisp value) a bit of a difficult task for the natural skeptics among us. But then the change-up in the second half of “The Sky’d Become Teardrops” from Crockett’s last-week-released new collection of original material hits — and hits hard — and you feel like an asshole for wondering why your mind’s wired this way, especially given how Crockett truly seems to respect the history he mines for inspiration — and way more than most. Anyway, the problem is with me, not Crockett. He’s great. (I think.)

Post Malone — Beerbongs & Bentleys
RIYL: Not being a hater.
What else you should know: I know it’s really popular to hate on Post Malone for being some sort of culture vulture, but the affable young talent’s clearly got a knack for penning hits. How much so? This sophomore LP from the Grapevine product — which decidedly bumps, and anyone who says otherwise is kidding themselves — went platinum upon its release today because so many of the previously released singles it boasts have already been streamed so many times. The music industry is a weird place, man. No wonder Post Malone fits right in.