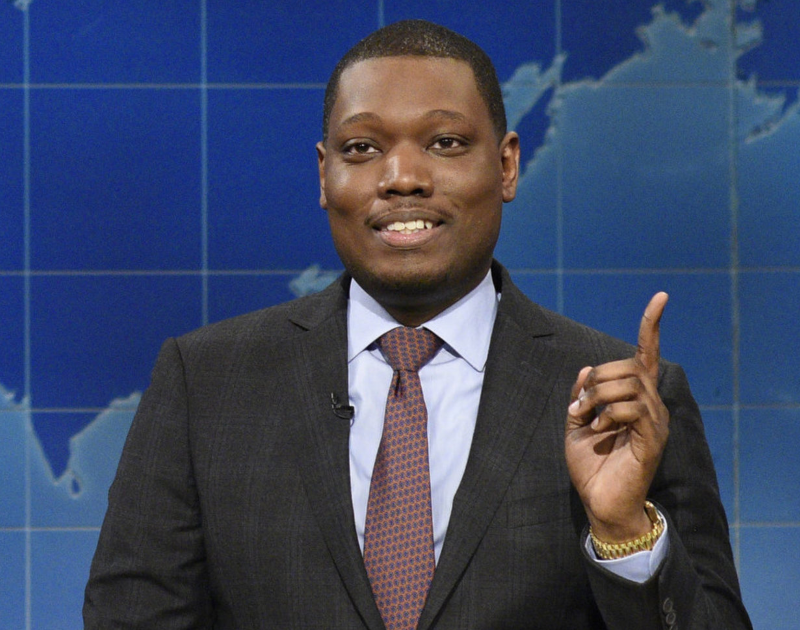 Have a Taste of Dallas, Muse on the News With Michael Che or Trevor Noah, Fly With The Eagles, Hunt For Ghosts, or Go On a Tipsy Bike Ride.

Looking for something different to do this weekend? You could always follow in the footstep of this British man, who recently made tacos out of his own amputated foot. And because trying new things isn’t as fun when you’re by yourself, he invited 10 buddies over to munch on his former flesh with him.

Nine out of 10 thought it was pretty good.

But human leg meat isn’t the easiest thing to come by. And friends willing to eat it with you are even rarer.

Fortunately, there are loads of other ways for you and your buds to spend the weekend than sitting around eating each other. And thanks to the following list, they’re easier to come by, too. — Cory Graves

Trevor Noah at WinStar World Casino and Resort (Sold Out)
The Daily Show’s Trevor Noah is coming to The Pavilion to do his world famous stand-up routine for us Dallasites. Noah’s deadpan humour, observational comedy, and political satire set him apart from many other comedians, and his show will be one you do not want to miss. — Kelly Benjamin

Caroline Rose at The Rustic
The former country-tinged singer-songwriter has blossomed wonderfully into a much more interestying, synth-tinged pop artist. Her lyrics are as satirical and on-point as ever, now delivered in a much more palatable and true-to-herself package. — CG

New Found Glory at House of Blues
The Godfathers of Pop-Punk are still at it after more than 20 years together, releasing a new album last year. But they’ll be bringing along a “wheel of songs” to keep the set list both fresh from night to night, and to make sure plenty of the old hits get their due. Bayside and The Movielife open. — CG

Roger Creager at Billy Bob’s
The award winning Texas country singer has a love of salt water. He frequently snorkels with dolphins, spear fishes, scuba dives and a load of other adventurous stuff we wish we could do. He often puts that spontaneity into his tunes, which he’ll bring to the World’s Largest Honky-Tonk Friday. — Sidney Johnson

Taste of Dallas at Gas Monkey Live
Sample bites from 50 Dallas area restaurants and tunes from 40 local and national acts throughout the weekend. Chris Knight and the world’s greatst Def Leppard tribute play on Friday. We also hear there’ll be a cement truck mixing up 2,400 gallons of Scotch cocktails. — CG

Robb Bank$ at Trees
Robb Bank$ is the oldest son of Shaggy. The 23-year-old prefers to rap rather than follow in Mr. Bombastic’s reggae footsteps, and the prolific Cash Money signee has, thus far, been successful enough in his own right that most folks don’t realize or even care to mention his lineage. Diego Money, GwapMizzle, Pyrex Pirates and JG also perform. — CG

Snow Tha Product at South Side Music Hall
Slowly creeping into the spotlight, hip-hop artist Snow Tha Product makes her way to South Side Music Hall to play some of her latest stylings. Since 2011, she had released her first album, Unorthodox, through an independent label. Songs like “Waste of Time” and her breakout single, “Holy Shit,” have caught a ton of attention from hip-hop enthusiasts and fans alike. — KB

The Regrettes at The Dirty 30
After sets at Coachella, Bonnaroo and before they hit Lollapalooza in August, the L.A. punks hit Dallas on a headlining tour. Destroy Boys opens. — CG

Michael Che at Majestic Theatre
Live, from Downtown, it’s Michael Che — half of SNL‘s Weekend Update segment, the first African-American to hold the position. Along with Colin Jost, they also represent the first-ever male-male co-anchors. This Friday, while the show’s on hiatus, he keeps up the weekend work live in Dallas. — CG

Different Strokes at Twilite Lounge (Dallas)
Maybe Someday there will be a better Strokes cover band, but that day is far away. And even then, you’ll think of that band “Is This It?” Fortunately, you don’t have to worry about that because you have these guys. — Obed Manuel

Quintron and Miss Pussycat at Three Links
This husband-and-wife musical and puppeteering team straight out of New Orleans brings its eclectic type of entertainment — known as “swamp tech” — to Deep Ellum tonight. Fun fact: Quintron is known for inventing the crazy machines he uses in his performances, such as the “spit machine” and the “disco light machine.” Sailor Poon opens. — Erika Lambreton

Motez at It’ll Do Club
Baghdad-bred producer Motez frequently breaks the internet with his remixes of popular jams. This weekend, he’ll do his best not to break the light-up dance floor at It’ll Do as he packs it out. — CG

Beers With Beto at Shipping & Receiving Bar
The punk rock politician trying to dethrone Ted Cruz hits The Fort for an informal town hall – y’know, because he’s the type of relatable guy you could have a beer with. — CG

Social Science: Being Human at Perot Museum
So here’s your chance to finally drag your old ass out of the house and for once get to enjoy the museum without having to hear screaming children — or the blathering of anyone under 21 for that matter. Grab a cocktail and a babysitter and head to this month’s edition of the Perot Museum’s monthly, after hours, adults-only programming. — Ashley Gongora

Unsolved Mysteries Listening Party at Dolly Python
Not just a listening party for the official vinyl release of soundtrack tunes from the creepy old TV show, but the first stop on a ghost hunt — with actual ghost hunting equipment, no less — through two Dallas cemeteries. Join me. Perhaps you may be able to help solve a mystery. — CG

The Eagles at AT&T Stadium
After several highly unlikely reunions, farewells and even unlikelier returns, hell has frozen over again for the most surprising Eagles tour do date. Filling in for the deceased Glenn Frey is the combo of his son Deacon and the legendary Vince Gill. Chris Stapleton opens. — CG

Chris D’Elia at Majestic Theatre
Hey, it’s that guy that played Whitney Cummings’ boyfriend on Whitney. Of course, you probably don’t get that reference, or else the show would have lasted more than two seasons. He’ll attempt to leave a more lasting impression tonight with his stand-up. — CG

Middle Kids at Dada
A month after releasing its debut LP, the hook-heavy Australian pop trio headlines this tour through the States. Gone Girl actress (and real-life sister of Jess from Girls) Lola Kirke opens. — CG

Brit Floyd at Verizon Theatre
Not to be confused with Australian Pink Floyd, the Dallas-based Bricks in the Wall, or the Pink Floyd Laser Spectacular, this English take on the concept considers themselves the world’s top Floyd tribute act. — CG

Clueless at Inwood Theatre
Skip this ’90s classic? As if! Alicia Silverstone sadly never topped her performance as Cher, a naïve but well-meaning Beverly Hills teenager navigating high school, drama and dating in this loose adaptation of Jane Austen’s Emma. And if you don’t like this movie, well, then you’re just a virgin who can’t drive. — Kip Mooney

Shakespeare in the Park: The Comedy of Errors at Samuell Grand Park
Scroll up a bit and read the entry about The Taming of the Shrew. — CG

Shooter Jennings at Western Son Distillery
Son of a legend and outlaw country star in his own right, Jennings stops by the local vodka distillery, presumably to do more than drink. — OM

2018 NHL Draft Fan Fest at Victory Plaza
While you wait to find out who the team’s taking in the draft, enjoy live music, barbecue, a mechanical bull and photo ops with Dallas Stars players. — CG

Wobbleland Dallas at The Bomb Factory
From the minds behind Lights All Night is this scaled-back-but-still-pretty-impressive fuzzy boots party featuring 12th Planet, Feed Me, Herobust, Rusko and over a dozen more computer whizzes. — CG

Official Wobbleland After-Party at RBC
After the party, the party continues right across the street, till 4 in the a.m., with more super secret big-name DJs TBA. — CG

40 Anniversary of the Lego Minifig at Legoland Discovery Center
The first modern Lego minifigs (which included the policeman) were introduced in 1978. The company’s throwing the lil copper a 40th birthday, and releasing some limited edition figurines to mark the occasion. — CG

Reunion Lawn Party at Reunion Tower
Gather ‘round the base of Dallas’ most famous shaft and have a ball. Lawn games, armadillo races and a beer garden are all part of the festivities. — CG

Motograter at Trees
Last month, all of the members of metal band Motograter walked out on imploding guitarist/vocalist Matt Nunes. So this one should be an adventure. Terror Universal, Bad Blood and Other Oddities open. — CG

Jason Boland, Cody Canada, Mike McClure at Love and War in Texas (Plano)
The Red Dirt band leaders are gathering ‘round for an acoustic jam. — CG

Fort Worth Weekly Music Awards Festival
Some 40 of Funky Town’s most lauded live acts perform at eight nearby venues. One wristband gets you into every bit of it. — CG

Party for the Deceased II at The Church
Live people ignore the strange and unusual. Fuck ‘em. This is a Beetlejuice-themed celebration for the half-living and the weirdos. In case of an emergency, draw a door and knock three times. — CG

The Cookout II at Deep Ellum Art Co.
It’s a celebration, bitches. It’s an actual cookout, with goodies from the grill, live wrestling matches and music. Get ready rumble. — CG