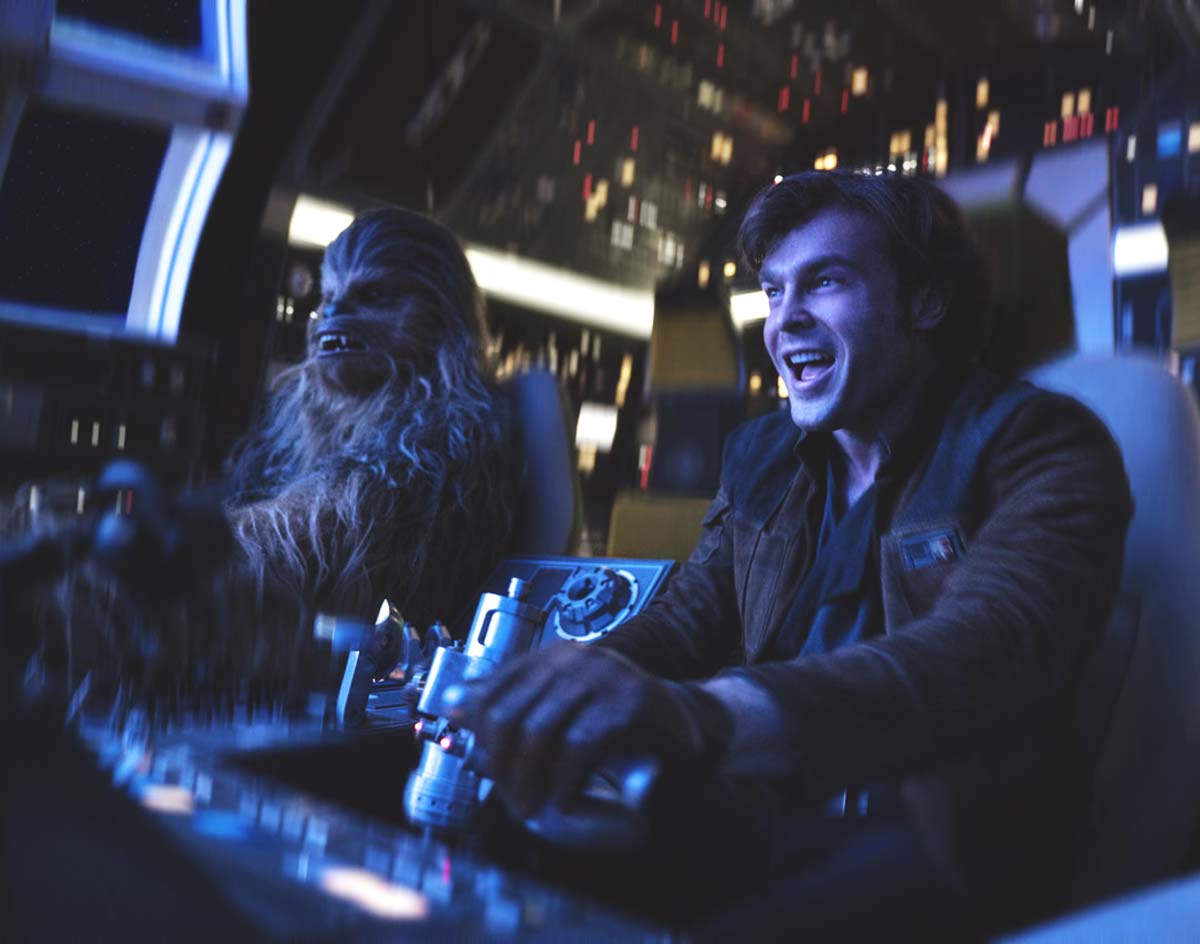 If The Last Jedi‘s Disregard For Fan Service Was A Step Forward For The Star Wars Franchise, Then Its Standalone Solo Film Is A Blatant Step Backward.

During the biggest set piece in Solo: A Star Wars Story, Han Solo (Alden Ehrenreich) walks up to an armed guard while wearing a stolen uniform. When the guard asks Ham to identify himself, he just mumbles gibberish that’s meant to sound like an alien language — and then kicks the guard in the groin. While watching all this go down via a security monitor, Han’s mentor of sorts — a man named Beckett (Woody Harrelson) — remarks in awe of this moment, “Wow. He’s good” to a co-conspirator of his named Qi’ra (Emilia Clarke).

Let’s be clear here: Kicking an unsuspecting dude in the groin is not a particularly imaginative, clever or skilled move. And yet, in Solo, we’re told that it is.

Oh, how indicative that scene is of this movie at large.

Taking place about four to seven years before the events of Star Wars: A New Hope, this standalone origin story is meant to show the adored Han Solo character’s humble beginnings as a quick-witted thief with a penchant for getting into trouble.

Living under the servitude of a local mob boss in Correlia with his girlfriend Qi’ra, Han aspires to make enough cash to leave the planet and become a pilot. After a botched escape plan, he ends up in the company of a band of smugglers led by Beckett and, through a set of circumstances, ends up needing to pull off a second job in which he attempts to pay off another, this one named Dryden Vos (Paul Bettany).

In other worse, audiences basically end up getting the same plot twice in one movie — what a steal! If only either of those plots were particularly entertaining.

It’s not the cast’s fault, necessarily. Ehrenreich’s performance is fine, if nowhere near as charismatic as Harrison Ford’s portrayal of the same character. He’s lifted by the efforts of the rest of the cast — primarily through Donald Glover’s charming portrayal of Lando Calrissian and Phoebe Waller-Bridge’s delightfully feisty efforts in voicing the droid L3-37.

The issue is that, while the film feels more tactile that the rightly criticized Star Wars prequels, it features more than a few cringe-worthy moments reminiscent of that trilogy. Do audiences really need to know how Han got his blaster? This script thinks so. And just how frequently do audiences need to be reminded that Han has a rebellious heart and a desire to do good but is just too selfish to fight the Empire? About 10 times, according to lines repeated almost verbatim throughout Solo.

Worse, the film struggles in to balance audience familiarity with its characters and creating a storyline with any real emotional or dramatic stakes. This is most notably seen with how quickly the franchise’s beloved tandem of Han and Chewbacca goes from 0 to 100 with its characters being total strangers and then sudden BFFs. There’s no real there there; it just happens, and the audience, which already ready for it, is expected to accept it.

Could it be that the premise is the problem? Unlike with the highly enjoyable Rogue One, audiences here know heading into the film that Han, Chewie and Lando all make it out of this thing alive. Surely, then action must then focus on an emotional journey or a way to test the character, right? Nope. Weirdly, Han is more of a good guy here than he was in two-thirds of the original trilogy. Unless there’s an additional Han movie coming that we don’t yet know about, it’s hard to see how this is the same guy bragging about his ship to Obi-Wan in Moss Eisley.

If The Last Jedi was a step forward for the Star Wars franchise because of all the surprising firsts it presented, then Solo is a bit of a step back due to its all-out embrace of the most regressive and nostalgic parts of this franchise’s fandom.

Ultimately, its wonderfully eccentric characters are wasted in a movie that lacks any real narrative momentum.

Hey, whatever it takes to please the nerds who are clamoring for inane callbacks and obscure references.