Even After His March Turned Deadly, Jeff Hood Still Fights. 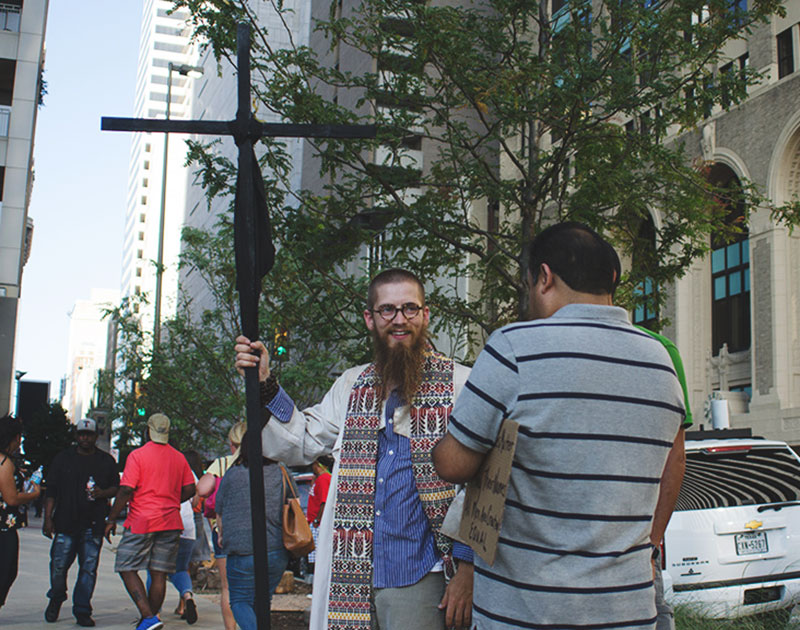 A Year Later, The Street Preacher Who Co-Organized The Peaceful-Turned-Deadly March Against Police Brutality In Downtown Dallas Still Demands Change.

Micah Johnson had decided he’d had enough and picked up arms against those he perceived as a threat to the well-being of African Americans in this country. Following an otherwise peaceful protest against police brutality, he embarked upon the second deadliest attack on law enforcement in U.S. history — following only 9/11 — and took the lives of Dallas police officers Lorne Ahrens, Michael Krol, Michael J. Smith, Brent Thompson and Patrick Zamarripa.

Johnson’s motives behind his rampage were allegedly in retaliation to the questionable killings of Philando Castile in Minnesota and Alton Sterling of Louisiana — two black men whose lives were taken, in the same week and on film.

I and many others were front and center when the gunfire and screams erupted, echoing throughout Downtown Dallas’ buildings as protesters scrambled to gain an understanding of what was going on.

A year removed from that horrible night, I met with the co-organizer of the march and self-proclaimed “prophetic street minister” Jeff Hood at his home in Denton to speak with him about the lingering trauma that Johnson’s actions had on his life since we first met almost one year ago.

“I’m prepared to die in a way I wasn’t before,” Hood says now, his belief in the ideals he marched for on July 7 now stronger than ever. “I’ve said I would give my life for the movement, and I meant that. But there’s a difference between saying that and meaning it, and saying it and it being a real possibility. There’s nothing that can prepare you for learning to die and realizing there’s also a big possibility that you could be a target.”

One year since the shooting in Downtown Dallas, relations between citizens and police haven’t improved any. Police involved shootings in America are still broadcast through the engine of social media on what feels like a weekly basis, and with no clear end in sight. One such incident that again sparked outrage was the story of 15-year-old Jordan Edwards of Balch Springs, who was struck in the head by bullets show by the now-fired officer Roy Oliver on April 29 after police responded to a house party complaint. Oliver, who has something of a troubled past, fired his rifle into the car that Edwards, his two brothers and two other friends were in as they were attempting to leave the party. After Oliver’s claim that the car posed a threat to his safety was debunked, he has been charged with murder — a charge that many, including Hood, thought was fitting.

See Also:
‌• In 2016, Next Generation Action Network’s Dominique Alexander Became A Leader For Dallas’ Frustrated Youth And Minority Communities.
‌• Mark Hughes Doesn’t Want Money From His Pending Lawsuit Against Dallas Police; He Wants An Apology And His Camouflage T-Shirt Back.

According to The Washington Post, police nationwide have shot and killed 492 civilians in the first six months of this year. That’s more than 80 people per month — more than two per day — and an almost identical rate to the same national figures from 2016.

In recent years, activists fed up with these statistics have called for police reform on two fronts: They believe there needs to be an increase in de-escalation tactic training for police officers, and they want legislation in place to hold officers who are guilty of misconduct to the same standard of law as the citizens they serve.

Hood, for his part, believes legislative action is a waste of time.

“The government ain’t gonna solve a damn thing,” Hood says. “The only way this is gonna be solved is in the human heart. Love is the only way, and sometimes you have to have that activist vision to force love — to pummel someone with love, to make someone submit to love. We have to pick up the weapon of love.”

Love was winning before Micah Johnson began shooting on July 7. Prior to Johnson’s attack, the march that served as its preamble had been the model of a non-violent protest. Chants of “black lives matter” rang as thousands streets filled the city streets, and emotions ranging from anger to sadness and everything in between could be seen on the faces of those marching. But the DPD officers on the scene were cordial, understanding and accommodating of the protesters’ concerns on that night. Officers and civilians alike were bound that in the spirit of love and duty for those affected by police violence. It was an uplifting scene — one completely and utterly uprooted by Johnson’s heinous actions.

Hood by no means endorses what Johnson did on July 7. But he does understand it. At a certain point — when change does not come, when black men continue to die at the hands of police, when clear video evidence of those deaths do not spur reform, when police relations with the communities they serve continue to not improve — all the effort that goes into at raising awareness through repeated protests and marches begin to feel useless. At a certain point, love’s grip inevitably loosens.

“What I see here in America is a bunch of people walking around here hating themselves,” Hood says. “They don’t know how to pursue justice or how to step over borders and boundaries because they don’t have anything to give. They believe because they have so little value that they don’t even have themselves to give.”

He takes a breath and considers his next words carefully.