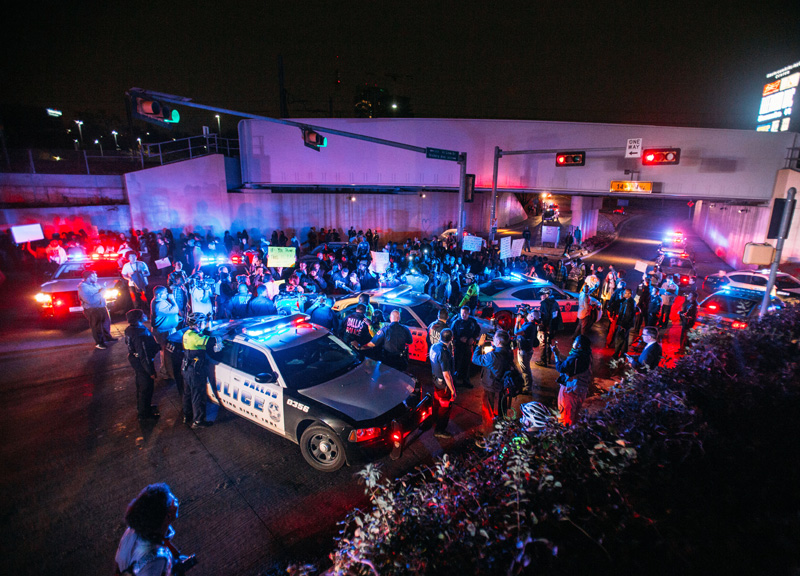 Micah Johnson’s Actions Were A Direct Result Of The Injustice Of The American Judicial System.

The horrific shooting that occurred in Downtown Dallas on Thursday night was the deadliest assault on law enforcement in the Unites States since September 11.

Now July 7 is a date that will forever live in infamy for Dallasites. Five police officers were gunned down for doing nothing more than sporting their badge and moderating what had been, up until the gunfire, the model of a peaceful protest.

There is no doubt that the deaths of Brent Thompson, Patrick Zamarripa, Michael Krol, Lorne Ahrens and Michael Smith were unjust. And there is no defense for the way Micah Xavier Johnson, a man radicalized in his hatred for the police, allegedly ended their lives.

Johnson was a former U.S. Army reservist who also served in Afghanistan from November 2013 to July 2014 before being sent back to the U.S. with the recommendation for an “other than honorable” discharge amid accusations that he’d sexually harassed a female within his unit. He would later receive an honorable discharge from his duties.

Johnson’s alleged rampage on Thursday night was a direct response to recent police shootings of black men, according to Dallas Police Chief David Brown. Johnson was one of 140 members of the African American Defense League, an organization formed by Mauricelm-Lei Millere.

On Friday morning, after the Dallas shootings, Millere posted “WE ARE CALLING ON THE GANGS ACROSS THE NATION! ATTACK EVERYTHING IN BLUE EXCEPT THE MAIL MAN, UNLESS HE IS CARRYING MORE THAN MAIL!” on the group’s Facebook page. This is one of a few times the group has called for the killing of white police officers. In 2015, the AADL said, “Every black person across this nation should find a white police to kill in every state and American/European province around the globe.”

Gross extremism notwithstanding, it must be said that Johnson’s mindset heading into Thursday was one with which many in the black community and beyond could at least relate. These Americans have long been fed up with the police-involved injustices broadcast across social media on a weekly — if not more frequent — basis in our country. That frustration has only been exacerbated by the lack of repercussions for the offending officers, who currently face no clear deterrents for such actions.

“Why do so many whites (not all) enjoy killing and participating in the death of innocent beings,” Johnson posted last Saturday, responding to a video shared on the Black Panther Party’s Facebook page of people participating of whale-killing.

Johnson was fed up. And, though his actions undoubtedly took things too far, he had reason to be upset. According to the Washington Post, Philando Castile was the 123rd black person shot by police in 2016. That number is still rising; footage of the Houston police shooting Alva Braziel while his hands were in the air on Saturday morning has now surfaced.

On Friday morning, Speaker of the House Paul Ryan spoke on the Dallas shooting, stating that “justice will be done.”

My fellow minorities and I have no issue with justice. In fact, we thirst for it. But justice must be an equal playing field, and I have yet to hear Ryan’s condemnation of either Castile or Anton Sterling’s killings. Isaac Newton’s Third Law of Physics states that, “For every action, there is an equal and opposite reaction.” But when there are varying measurements for the value for human lives in America, reactions to the deaths of black men are simply not equal to the deaths of others.

This is how the usual story unfolds for a black victim’s families: An unarmed black man is murdered at the hands of the police; the officer in question is placed on administrative leave; an (internal) investigation is conducted; the case goes to court, where the officer is almost never indicted; and, finally, the victim’s family and the black community at large is left with no sense of justice being served. This bias in the American justice system is so stark that clear video of wrongdoing is no longer sufficient evidence to gain an indictment, let alone a conviction. How are black Americans supposed to react to that?

Black life is viciously, callously and regularly taken without reproach in this country. We as a nation are collectively calling for peace in these trying times, but what peace is there when there is no even playing field? Shouldn’t America stand as much with the victimized as they do with their oppressors? Isn’t that the foundation of justice?

Personally, though, I reject the claim that our country has a long way to go before these injustices are a thing of the past. We have been here, at the cusp of change, for decades. Change has rested on the tips of presidential pens, law enforcement actions, congressional acknowledgement and the gavel of the Department of Justice this entire time. I believe that the second our government mandates that police be truly held accountable for escalating otherwise routine situations — as many of these instances were at their start — the number of these public executions will be dramatically reduced. And maybe one day soon thereafter, they will cease.

The police must take on a more active role in this fight. A “good” cop can no longer be considered such when they’re witness to inequity and not doing a damn thing about it. Police who stand idly by are in no uncertain terms cowards, deaf to the cries of those they swore to protect. They stand behind a badge that represents bravery, yet boot-lick the bigots in their department that beat, kill and even rape civilians. What happened to these officers’ oath to protect and serve everyone equally?

It is no wonder how the term “law enforcement” has become a perplexing one to so many in the black community. Where is the enforcement of law when unarmed citizens are gunned down in the street with their hands up in submission?

Black America rarely tastes the sweetness of justice, and it is up to our generation to change this system. We cannot wait any longer. We cannot have the same conversations of submission at the hand of police that our parents and grandparents have had with us.

Listen, I completely sympathize with the Dallas Police officers who heroically defended the protesters Downtown on Thursday – especially the five officers who lost their lives. I was there when the gunman started firing at the end of a beautiful, peaceful protest. I know firsthand the confusion and terror that Dallas officers must’ve felt as the sounds of the gunfire echoed around the city’s streets and it became clear that DPD was the target of the ambush.

But I also know that the great American poet Langston Hughes wrote a warning about this that’s fitting for these times.

“Negroes, sweet and docile, meek, humble, and kind: Beware the day they change their mind,” he wrote.

Micah Xavier Johnson changed his mind. He just acted out in the wrong way.