Is This Thing On? Dallas Comedy In The Age Of COVID. 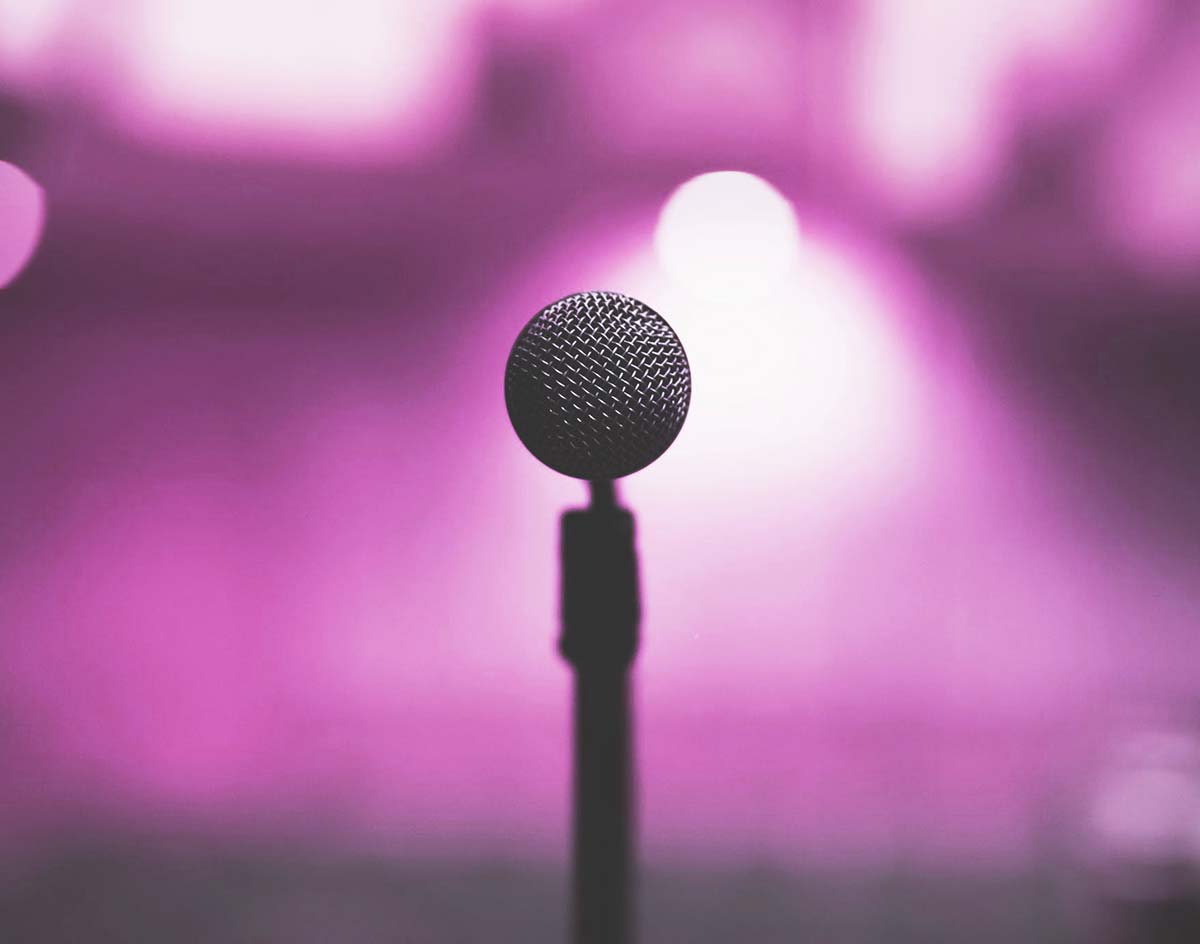 Two Clubs Lost & The First U.S. Stage To Host Touring Comics After The Initial Lockdowns? Dallas Comedy Sure Is Dabbling In Lots Of Topical Material.

Two Dallasites walk into a comedy club, wearing masks and maintaining six feet of distance at all times.

If you’re wondering how this joke could possibly end with a funny punchline, well: Welcome to the year that Dallas comedy is facing in 2020.

In a world that feels increasingly dour, Dallas’ comedy club scene is fighting to stay afloat and get its jokes out to the people. Prior to the pandemic taking root in America back in the spring, there were plenty of laughs to be had. In recent years, the Dallas-Fort Worth region has boasted one of the largest and most active comedy scenes in the country. But the still-active COVID-19 pandemic has seen two area clubs shutter as their still-standing counterparts oscillate between alternating states of open and closed.

“We were chugging along before all of this happened — we were really making great strides,” says Lindsay Goldapp, co-founder and artistic director of the Stomping Ground Comedy Theater and Training Center, one of the newest comedy venues in the Dallas area. “We’re a young non-profit, we’re a young theater. So it takes a while to build up momentum and really get your student base and your audience base built. But we were in a really comfortable place and building momentum prior to all this.”

Meanwhile, stalwart clubs like the Dallas Comedy House and Backdoor Comedy Club, which both changed locations within the past calendar year, were finding especially solid footing in their new homes — only to be particularly railroaded by the pandemic’s uprooting of the industry.

“January and February are notoriously great for comedy clubs — nobody knows the reason, but it’s a really great time for comedy,” says Linda Stogner, who co-owns Backdoor Comedy Club with fellow comedian Jan Norton. “When the pandemic hit, it was like, ‘Oh no!’”

“We had corporate clients on the west coast who were concerned about events we were having in Dallas,” says Austin, whose recently closed Dallas Comedy House had hosted had been a staple of the comedy scene in DFW for 11 years through regular events and its annual hosting of the Dallas Comedy Festival. “I remember calling someone and hearing, ‘So-and-so wants to cancel because of COVID,’ and then someone else wants to postpone because of COVID and so on. We were, of course, checking in, updating our policies and checking CDC guidelines because we were seeing it happen to other people. As a company, I think we were a little bit ahead of it; I knew something was coming. I just wasn’t quite sure how bad it would be.”

On August 7, Austin formally announced she was pulling the plug on the revered club she’d owned and operated for 11 and a half years. The hurdles presented by pandemic regulations were too high to overcome over such a long period, turns out. Still, Dallas Comedy House held on longer than the Plano location of Hyena’s Comedy Nightclub, which closed a millennium ago back in May. (The Dallas and Fort Worth locations of the local comedy club chain still plan to keep the lights on.)

Micah Brown, the former manager of the now-closed Plano Hyena’s Comedy Nightclub and current manager of the temporarily-closed Dallas Hyena’s Comedy Nightclub, says the Plano spot’s demise all happened rather quickly: “We had comedian Joe Machi scheduled for a weekend. He comes, does the Thursday show — everything is normal. Corona just started and people are going, ‘OK, maybe this is serious.’ I come into work at 3 o’clock on Friday and the boss texts me, ‘Hey, your headliner went home.’ And that’s when I was like, ‘OK, maybe this is gonna be something.’ We had one more weekend after that, and then we closed.”

The path forward for comedy in Texas has been murky from the moment the pandemic hit the United States and started to take hold in the state’s largest cities. On top of following guidelines to the letter — masks for audience members, wait staff and comics; hand sanitizer stations; temperature checks — clubs were forced to contend with forced closures throughout March and most of April until Gov. Greg Abbott began phase 1 of his plan to reopen Texas on April 27.

In the wake of that announcement, the Addison Improv became the first comedy club in the United States to re-open amidst the COVID-19 pandemic. Its first show back post-closure came on May 1, at 25 percent capacity and with social distancing guidelines in place. Acclaimed New York-based comedian Mark Normand was among the first touring comics to take advantage of the opening and perform a weekend at the suburban Dallas club. A film crew documented his experience for a short YouTube documentary.

On the whole, smaller area clubs have been hesitant to reopen.

“We knew early on we wanted to base our decision on science,” says Stomping Ground’s Goldapp. “We wanted to err on the side of caution, because we knew that we didn’t want our venue to be a liability for people and to be the potential cause for some sort of growth in this pandemic.”

Hers is a valid concern shared by any venue, including larger operations like the Improvs and Hyena’s, which have re-opened under strict guidelines but been forced to contend with crowds that aren’t always eager to play by the rules.

“There have been a couple groups that just thought it was complete BS,” says Hyena’s Dallas manager Brown. “They didn’t want to wear their mask. They were like, ‘Oh, my mask broke!” every time I gave them a mask. I’m like, ‘Just get to your table.'”

Under state guidelines, audience members are free to take their masks off in order to eat and drink at their table but are expected to wear a mask when in transit around the venue.

“We try to accommodate everybody,” Brown says. “We want to have a good time and a good show.”

Performing comics are acclimating to the new normal as well.

Other recent comedy innovations — “Comedians re smart,” Austin says — include outdoor shows and livestreamed efforts. After having hosted Dallas improvisational musician Marc Rebillet’s drive-in concert tour in late June, the Coyote Drive In in Fort Worth is becoming a touring comic destination; it will host Dallas-sprung comedian Iliza Shlesinger on October 10. Mostly, though, comedians are turning to Zoom and other online video outlets.

“For us, it was imperative we move online,” says Goldapp, whose theater hosts a number of comedy-as-therapy courses. “With many of the communities we serve — the senior community, people with Alzheimer’s and dementia and their caregivers — there was no option but to pivot online. We did what we thought would be most safe.”

One thing is sure: Audiences are perhaps especially desperate for a laugh these days.

“The shows I’ve managed during the pandemic, the customers that came were so happy to have live entertainment,” Brown says of the majority of Hyena’s audiences. “They were some of the best crowds we’ve had — because they just wanted to be there. So, I think whenever we’re allowed to open back up [at the Dallas location], there’s going to be a huge resurgence.”

No, it’s the wait that’s the hard part, Goldapp says.

“Comedy’s not going to go away,” she says. “It’s just going to be a matter of what it’s going to look like when we’re back. Hopefully, it’ll look very robust and very diverse when we get back.”

Even with her Dallas Comedy House permanently closed, Austin is enthusiastic that the laughs will never go away — and excited to watch the process unfold.

“There will be other clubs — similar or not similar [to DCH] — in the future,” she says. “But we can’t wait for those — [now we’ve] got to figure out ways to create comedy.”