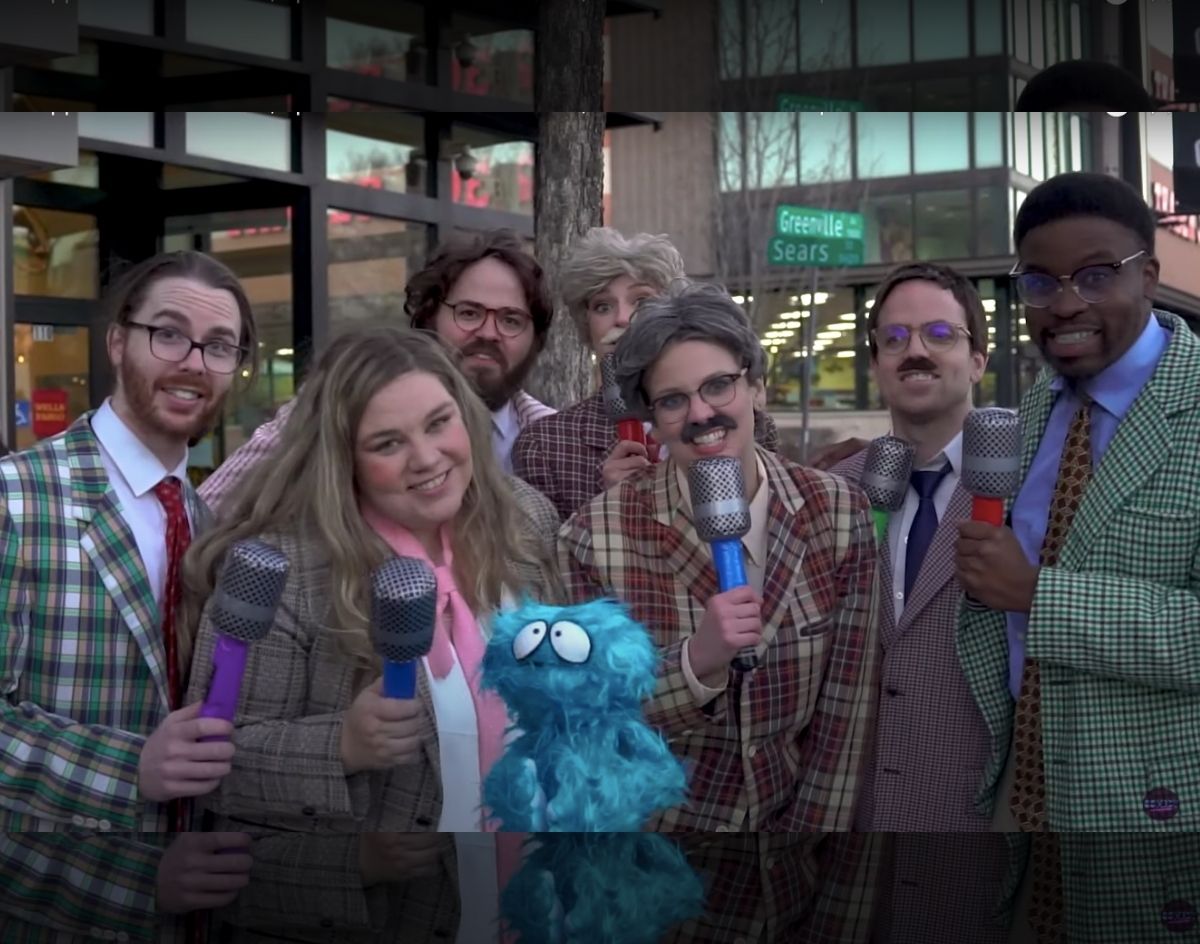 Danny Neely And Roger Ricardo From ‘Comedy For The Internet’ Talks Its New Greenville-Centered Sketch Series And What It’s Doing For The Comedy Community.

Reporters waging war on one another. A bumbling nature documentary crew. A keynote for a sleep app presented by an insomniac. Two tubular product reviewers running around a 7-Eleven in hope of getting a sponsorship. All are characters and situations that make up the first episode of It Just So Happens on Greenville, the newest sketch show from the Dallas comedy group Comedy For The Internet.

Founded in 2020 by Danny Neely, Sallie Bowen and Roger Ricardo, the channel prides itself in its eclectic mix of comedic genres and Dallas-based talents such as Bonnie Criss and RaShaad Jamari Leggett. Not adhering to a strict format, it lets the actors go with the flow as they embrace the “yes and…” mentality of improv comedy, amassing nearly 87,000 followers on Instagram. The result is a show defined by its performers as they make sense of the Greenville-world around them.

We sat down with Neely and executive producer Roger Ricardo to discuss CFTI, their approach to comedy and what they hope they can do with the Dallas comedy scene.

The next episode of It Just So Happens on Greenville premieres on the CFTI YouTube channel on April 4.

Explain CFTI to a caveman.

We actually took some caveman courses before launching the business just to give us the ability to communicate with cavemen.

I never took that improv class.

Neely: It’s an important one. You never know when you’re going to run into a question like that.

Comedy For The Internet is a company that’s designed to give people and artists a platform to share their work with the world. We know there’s a lot of talent here and a lot of artists in a variety of fields. We wanted to get that work out there and give people a model for how you can take something that is a passion, focus on it and drive it somewhere beyond just showing up for a show on stage every week. That was the impetus for us.

Ricardo: Yeah, it’s another stage for this pool of talent that we have, and everyone’s friends [with each other]. It’s a community that we’re lucky to be a part of here in Dallas.

Neely: The cavemen would get the community thing, but they wouldn’t get the platform and vision part.

Neely: CFTI is basically fire for the 21st century.

What comedic inspirations helped shape the overall tone of the skits and your general approach to writing and performing?

Ricardo: It’s always forming, there’s no set way. The influences are really flexible, very fluid. Everyone has something to offer. It’s really all about the community and what they bring into it.

Neely: 100% It’s always gonna be a product of who’s involved at that given moment. We’re very confident on the creative side of things. Inspiration-wise, I’m a big fan of Dan Harmon and his work on shows like Community and Rick and Morty. I like proving that I’m smart with comedy [Laughs.]

I also like physical stuff. I was definitely influenced by I Think You Should Leave when we were putting together a sketch comedy show. We’re looking at a lot of different sketch influences to help guide us as we make something like taking references, but also, making it our own.

Our comedy tends to be really clean for the most part, which isn’t necessarily like a mandate from us, but I think if you’re willing to think through of what’s making a bit funny, you can do something without going blue. We’re open to any form of comedy, but ours tends to be really approachable for a wide audience. I like that people will say, “Oh, my kid loves this,” as much as the adult watching it, you know?

Ricardo: You can show our stuff to your grandma and she’ll be fine.

The first episode of It Just So Happens On Greenville aired at the beginning of March, and I just need to ask, why Greenville?

Ricardo: Why not Greenville? Greenville is really fun. There are a lot of great things going on.

One of our partners is Four Day Weekend. We got to tip our hat to Four Day. A lot of our talent has also performed with Four Day since the launch of our channel. And it’s the place to be right now. That’s where we are every weekend, so it’s really become a great place for us. And we’ve got some great interactions with the crowd, really good reception.

Neely: [Greenville] has been our creative hub. We wanted to build up comedy in that area and establish it as a location where fun things happen.

Ricardo: You can expect us to be on the streets of Greenville any given weekend. On these channels [the audience] is seeing [us] once a month, but if you’re from Dallas, you can come out and interact with any one of these characters at White Rock or Greenville on almost any weekend. So it can become a scavenger hunt for our audience. And that’s really what we’re focused on — creating an experience off of the internet.

How do you guys decide the visual style of the skits? There’s a lot of handheld stuff, editing choices where people will get cut off mid-sentence, and a completely different scene happens. Is that a decision at the moment, or is there a deliberate approach to it?

Neely: I feel like we should answer this question one word at a time, back and forth, because that’s kind of what the process is. Both are happening at all times, the visual decisions and the creative decisions. We talked about improv as a creative tool for the performers and the talent, but it’s also like very much a tool on the production side.

That’s kind of how we built our production team too. We’re not setting lighting for a shot for 45 minutes and then doing five takes up that shot. That’s not the vibe of the show. We have a feel for what the edit is and what the flow of the episode is going to be and we establish parameters. Luckily, the talent is very talented is and able to produce great work under those parameters. And then we shoot, we stay in the moment, we ride with whatever’s happening.

Ricardo: I would say that we’re very agile with our processes.  In this last month, we produced a song and made a music video all within 30 days. We have years of experience in production,  from various facets from TV to commercials and film. We’ve been able to apply everything we’ve learned to the creative process and made it fun for talent, and exciting for production. But we’re not limiting resources. It might be handheld this month, it might be more cinematic [the next]. You never know what you’re going to get.  That’s what we like about it.

What’s one skit or one bit you’re most proud of? Or a skit you’re surprised it worked out the way it did?

Ricardo: I’m excited about what we’re doing right now. It’s really coming together. We just shot this past weekend, and I walked away like “I can’t believe we just pulled that off.”

Neely: It does feel like a little bit of a magic trick every time you get done with the production. I’m proud of the way we’ve been able to mix genres within this single show. In this episode coming out next week, we’ve got a reality TV show element, a music video, “a man on the street bit.”

Neely: Yeah. Campaign Trail, and then like a totally, cinematic narrative, kind of action piece. That’s one episode.

Where do you see the company going from here?

Danny: This is the first step towards series, films — expanding the media universe in our own capabilities. Creating opportunities for this community to do things that they maybe never thought they’d have the chance to do staying in Dallas.

Ricardo: We’ve also been very strategic with our data and fiscally. We’ve got a really good foundation for partnerships to develop future content and bring things to other markets. We’re already in the works with a couple of those things — working with brands and developing original content. And we’re pushing the envelope in that way. The old, traditional way of media is out the door, and there’s a new wave coming in.