I Was A Virtual Fan For A WWE Monday Night Raw Taping.

Curious What It’s Like To Serve As A Virtual WWE Fan In COVID Times? Well, We Snagged A Ticket To A Recent Taping — And Here’s What We Learned.

In normal times, WrestleMania stands as one of the biggest spectacles in the sports and/or entertainment industries.

To wit: Back in 2016, when AT&T Stadium hosted the event, a record-setting 101,763 warm bodies were in attendance to watch it in person.

For comparison sake, that was roughly 101,763 more people than saw last year’s version of the spectacle.

To say the least, the COVID era has run roughshod over the wrestling industry, and the WWE in particular hasn’t hosted live fans at any of its shows since sometime in March 2020.

Admirable as the WWE’s initial efforts were at keeping the show going no matter what, the first several weeks of this effort were awkwardly silent and stale. TV ratings hit an all-time low, and an even bigger tragedy is what it cost the Dallas wrestling fan. On November 22, The Undertaker was supposed to put the cap on his legendary career at the American Airlines Center as part of 2020’s Survivor Series Pay-Per-View. It was to be a fitting ender to his 30-year-career, as Taker made his WWE debut at this same event. Even more serendipitous? The icon got his start right here in town, wrestling Bruiser Brody in his first-ever pro match at the now-defunct Sportatorium in 1987.

But it wasn’t meant to be. Instead, and for coming up on a year now, the WWE has been relying on virtual fans at home piped in on a sea of video monitors. 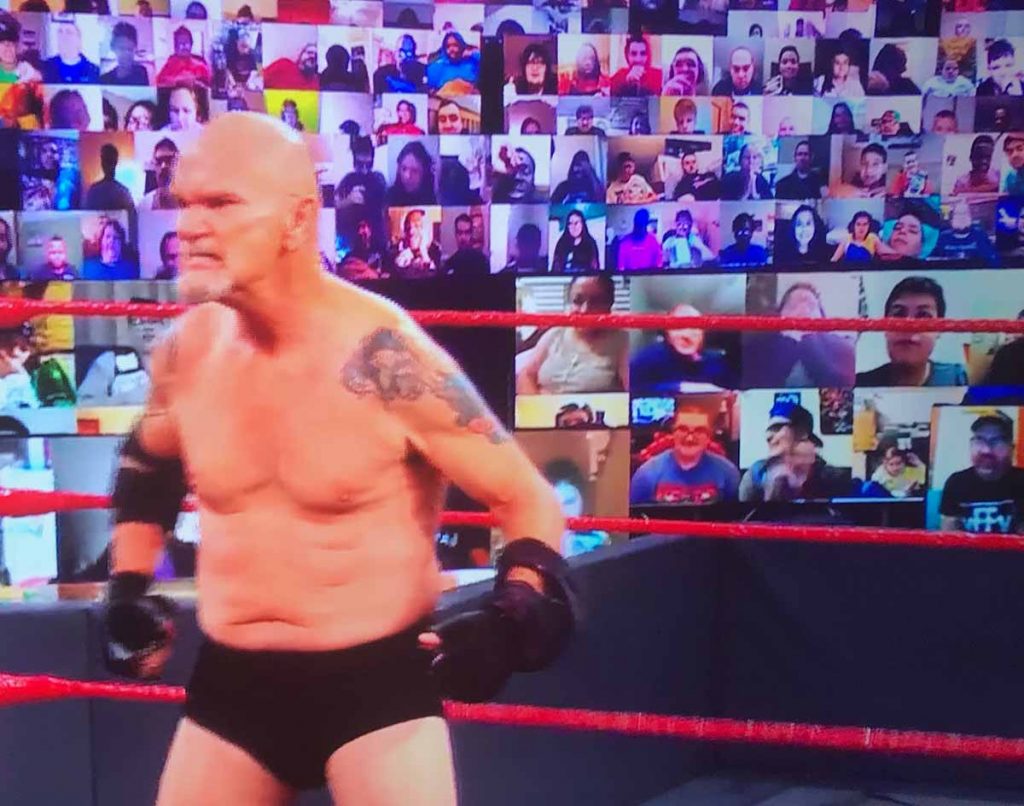 Our author among a sea of faces behind Gillberg at the January 18, 2021, Monday Night RAW taping.

It’s a setting the company has dubbed “The ThunderDome,” and it aims to mimic as much of the live-fan experience as possible. As far as this goes for someone watching the product on television twice a week, this effort has proved mostly been effective. Hearing boos, cheers and familiar chants goes a long way to putting talent over.

Getting to act as one of these virtual fans is a hot ticket to land — but, this past week, I managed to secure my own spot in the ThunderDome on an episode of Monday Night RAW.

Let me peel back the curtain a bit for you.

For the most part, my experience was a lot like what you see on TV inasmuch as we’re receiving the same feed and commentary that shows up on cable — just about three minutes before the rest of you little folks are privy, is all. The really big exception is the producers kept spoon-feeding us info on who to cheer for and what to boo. 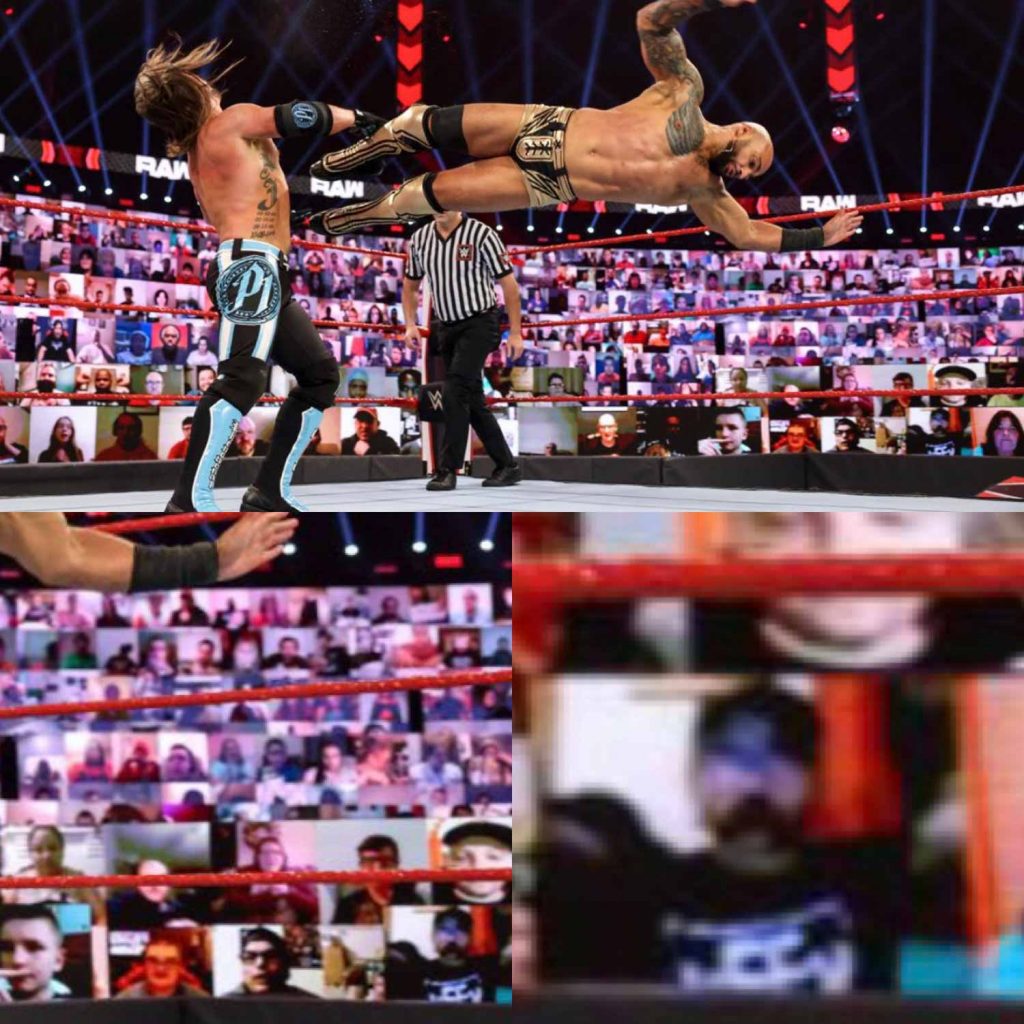 A breakdown of our author’s positioning within the WWE ThunderDome.

“Drew Gulak is coming out — big boos, people!” the producer said at one point. I gave a half-hearted thumbs down to his request. It was weird; I thought fans were supposed to like Drew.

At first, I felt compelled to boo or cheer whoever this guy suggested — because, at the top of the show, he warned that not being a good spectator might mean us getting pulled from the feed and replaced with an alternate.

So, there I sat, screaming loudly alone in my living room while my wife sat in the corner, secretly filming me on her phone and fighting back laughter.

Halfway through, though, I got emboldened. I started fervently thumbing down a face Charlotte, and cheering a Peyton Royce, who I guess is supposed to be a heel now. Eventually — actually, an embarrassing amount of time later – I figured out that it wasn’t even our real voices providing the audio piped into the arena or being broadcast on TV. When one star we were kinda middling on walked out, the cheers audibly ramped up even while our virtual avatars weren’t quite matching suit. 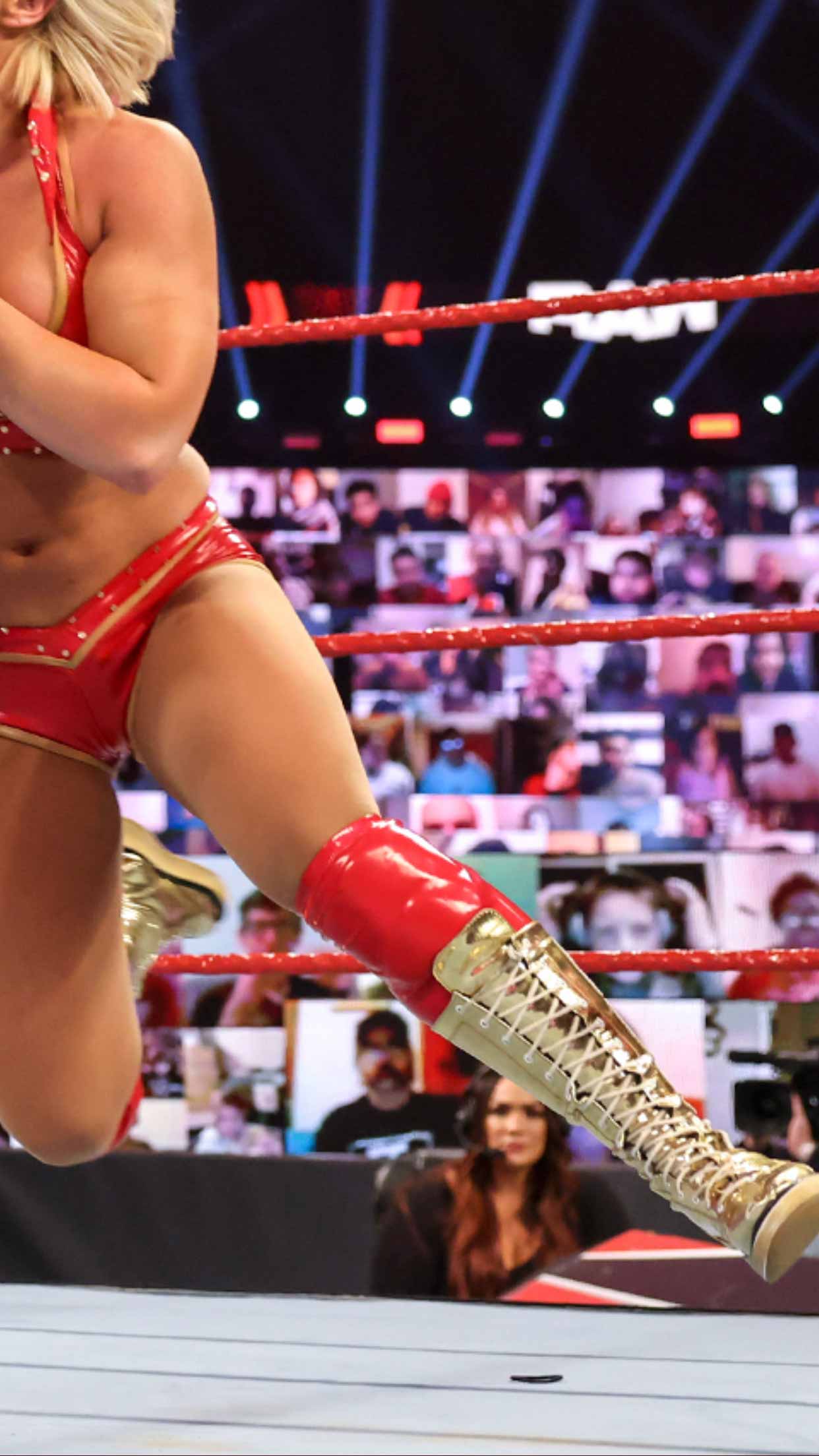 Hey, there he is again, right underneath this wrestler’s leg and over the shoulder of the commentator.

“The crowd’s going crazy!” the producer compelled. “People, let me see it!”

I only wish it hadn’t taken me so long to put two and two together, and that I hadn’t kept my household awake by drunkenly screaming and wildly gesturing at my laptop for the previous three hours.

There were some cool perks, though. For instance, a few minutes of a six-man tag team match that took place during a commercial on the live broadcast didn’t cut for us virtual super fans, giving us about three minutes of secret bonus content.

Those things aside, attending RAW as a virtual fan was basically just like watching another TV airing of it — only on a smaller screen and with worse sound.

Later that night, I saw a tweet about that night’s show and HOLY CRAP! THERE I AM IN THE FRONT ROW, TWO SEATS OVER FROM THE COMMENTARY BOOTH!

A re-watching of the episode the next morning confirmed it: I am in, like, every other shot.

No matter how many times it happens, it’s always a trip to see yourself on TV — and that goes tenfold for when you see your band’s NWO parody shirt creeping between Mandy’s legs or over the shoulder of AJ Styles’ behemoth of a bodyguard.

I guess what I’m trying to say is this: Until they personally let me back into the building – which at this point looks like might not happen until 2022 when WrestleMania comes back to town — this is the only way I want to be watching the WWE’s product from here on out.