Forechecking: On The Dallas Stars’ “Culture Of Mediocrity.” 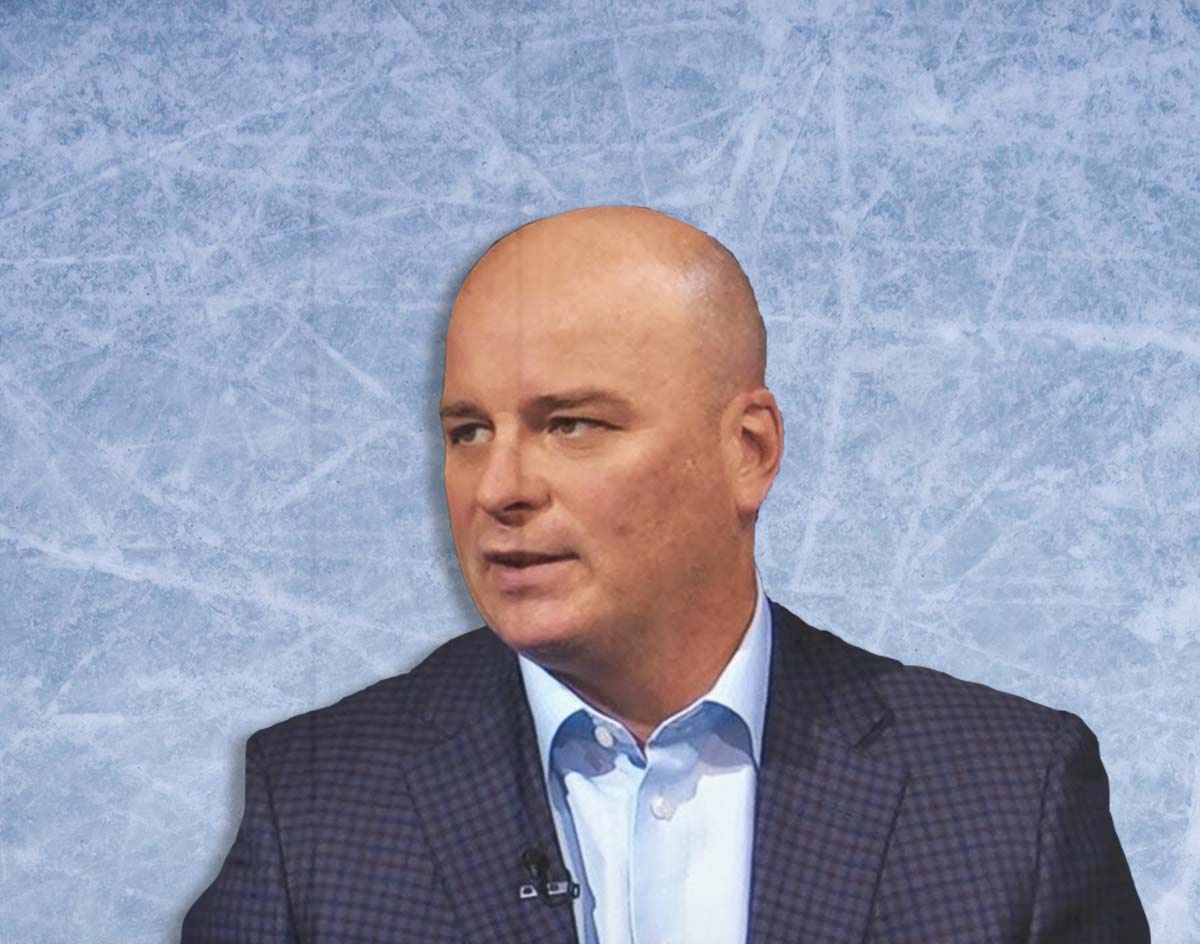 It Was A Win-Less Week For Your Dallas Stars, Whose Front Office Also Pawned Devin Shore Onto Someone Else. No Wonder Monte Is Frustrated!

Your Dallas Stars are having great difficulty in finding their motivation these days. In turn, Coach Jim Montgomery — never one to mince words — is calling out his team with a sweet and sour tongue. How refreshing!

Yes, the Stars’ “Culture of Mediocrity” has been a hard pill to swallow for Montgomery, and meetings with individual lines and players, along with his transparent frustrations in interviews, have done little to spark his inconsistent team.

In an attempt to rethink, remix, and refresh the team’s vibes, Monty has called the group’s practice efforts “f*cking embrassing,” started AHLers over more-expensive options, shuffled lines and even blindfolded his players.

But will chastising this team any more produce the results the front office expects? We here at Forechecking™ had reservations before the season started, as you no doubt recall.

We also predicted some trades coming down the pike eventually, too. And now we have one, as the Stars traded forward Devin Shore, who was on fire to start the season but has long since cooled off, to the Anaheim Ducks for forward Andrew Cogliano.

Are we shocked that Devin Shore is no longer a Dallas Star? No. The versatile forward was unable to find consistency with the Stars after a moderately impressive rookie season back in 2016-2017 in which we graded his efforts at a B+. Last year, we dumped in down to a D-, frustrated that he never grew into the second-line center we hoped he’d become and wondering when the Penguins might come grab him.

Well, we got his eventual team wrong, but we weren’t far off.

Still, we do like Mr. Shore, and we liked that we saw him honing his leadership skills during his time here. Even in his final game with Dallas, we noticed Devin fist bumping and supportively talking to his linemate Val Nichushkin — a fairly innocuous act in a losing effort against St. Louis, but a sign of character, without a doubt. So, here’s to Devin! We thank you for your service to the Dallas Stars, and we hope that the Ducks take your game to the next level, just not against us!

As for what the Stars got in return? A slight upgrade. In Cogliano, Dallas gets an Anaheim fan favorite veteran that is known for his effort, speed, durability, grit and leadership. He’s under contract for two more seasons at a cap hit of $3.25 million. But, mostly, Dallas needed a shakeup like this — so this one is Forechecking™-approved!

Cogliano joins a Dallas squad that’s currently poised to make the playoffs thanks to the sudden collapse of the Central Divison and the slumping Western Conference in general. The Avs, Jets, Preds, Wild, Ducks are all playing like a can of flat 7-up lately, and if Dallas could find ways of beating the league’s bottom-feeders, they could gracefully and effervescently float to the top like the delicious lemon-and-lime fizz of an ice-cold glass of Sprite!

Our message to Jamie Benn and the Dallas Stars is simple:

Image is nothing. Thirst is everything. OBEY YOUR THIRST!

Err, on second thought, maybe Ol’ Chubbs should lay off the sugary stuff. The Captain is having trouble finding well-fitting jeans as it is. Maybe a pair of Levi’s Wokes would do the trick?

Anyway, here’s a look back at the Dallas Stars handiwork this week:

• It’s Never Sunny in Philadelphia at Philadelphia Flyers, 1-2.
The Flyers entered this contest on an eight-game losing streak, sporting the worst record in the league and a -36 goal differential. The biggest win the Flyers organization has had all season long was the introduction — or perhaps better put, unleashing — of its mascot “Gritty” to an unsuspecting hockey world and beyond. Surely you’ve seen the unstable creation online in GIF form, at political marches or making cameos in your favorite television shows. The nefarious creature must’ve also been busy pregame against Your Dallas Stars, perhaps spiking the Stars’ Gatorade with a bit of Turbo Lax. It’s the only explanation we can think of as to why the Stars gave such a poopy performance against the dumpster fire that is Philadelphia, a team so discombobulated that their announcing crew was caught venting their frustration during a recent shutout loss. The only positive of the night was Anton Khudobin — yes, again. Dobby was great, stopping multiple odd-man rushes, including a two-on-none late in the third to keep the Stars within striking distance. Better yet, the Stars’ backup netminder was just as irritated with the team’s intensity as fans were in this one; cameras captured Anton gesticulating in frustration towards his bench after making another acrobatic save on an egregious turnover, as if to say “WTH! This is F*cking Horsesh*t!” We are sorry, Dobby. You deserve better.

Not sure how you can call this goaltender interference on Jake Voracek. I mean he barely even touched Khudobin. pic.twitter.com/IBzCe5uKVV

• Feelin’ The Blues versus St. Louis Blues, 1-3.
You would’ve imagined after getting thumped by the lowly Flyers that Dallas would come out with a pep in their step against the Blues at home. Instead, Tarasenko and the Blues scored on the first shot of the game and completely outplayed Jamie Benn and the bois in front of sparse home crowd that had little to cheer for. We aren’t going to beat you down with a rundown of this game, but we do want to point out a couple positives from an absurdly uncompetitive team effort. Everyone’s favorite whipping boy, Valeri Nichushkin, played with conviction, creating two scoring opportunities for himself as he continues to improve on the season. Jason Spezza also had a great effort all evening, and came close to scoring after pinging a wrister off the crossbar. Erik Condra, the 32-year-old AHLer who is currently your Dallas Stars’ second line winger, also scored his first of the season — and looked absolutely shocked that he did. Welp, that’s it for the nice things. Everything and everyone else sucked.

There’s a lot to unpack from last night’s game. Here are five things to know. https://t.co/Tzg2KsziPF

• Very, Very Frightening @ Tampa Bay Lightning, 0-2.
Dallas plays down or up to the level of its competition — and, as expected, put up a good fight against the NHL’s best team. An uptempo first period was a welcome sight, as it’s usually taken at least 20 minutes for the bois in Victory Green™ to participate in some games this year. Jamie had his best game of the week, even if he did pull the Stars off the power play on two separate occasions. We need to see some sort of life out of the captain, and while it was a step in the wrong direction, at least it was a step. Jamie eloquently and accurately summed up the game in this post-game quote: ” I thought we played a pretty good game against a good team. Our power play was shit, and that was the difference.” Indeed! Dallas went 0-for-6 on the man advantage and squandered a five-on-three as they succumbed to the Zubov rule. Still, it was an entertaining game after a stretch of uninspiring hockey. Things are looking up!?

“Like coach said, let’s be relentless!”@DezBryant gets the guys amped up calling out tonight’s starting lineup. #GoStars #ThrowUpTheX pic.twitter.com/BygLinY8nr

It’s tough to select a player on the Stars that had a truly exciting week when the squad goes win-less, but if it weren’t for the efforts of the Stars’ goaltending — and in particular Anton Khudobin lately — these games could’ve ended up far worse for the boys in Victory Green™. Dobby saw his record drop to 8-9-2 on the season, but his .956 save percentage in his last six appearances is more indicative of his play. The 32-year-old Khazakstani is posting his best personal stats since 2013-2014, and providing comedic relief, too. After the Stars’ defeat at the hands of the Lightning, Anton had a suggestion to help the Stars fortunes: “I think guys played really well; we just couldn’t get the puck (in)to the net. That’s not an excuse. Maybe we need to go to the barbershop and get bald. I don’t know.” We’re not sure what he means, but we like it!

It’s a light week before your Dallas Stars hit the NHL All-Star break. Better yet, they get to stay at home the whole time. Let’s send off ya boi Miro Heiskanan to the exhibition up in San Jose on a high note, yeah? Yeah!

• Saturday, 1/19, at 6 p.m. versus Winnipeg Jets (HOME): The Stars and Jets have split their season series to date, with both squads winning 5-1 home games. Historically, the Stars have not matched up well against the stacked Jets, but they should be able to give them a run for their money at the AAC.