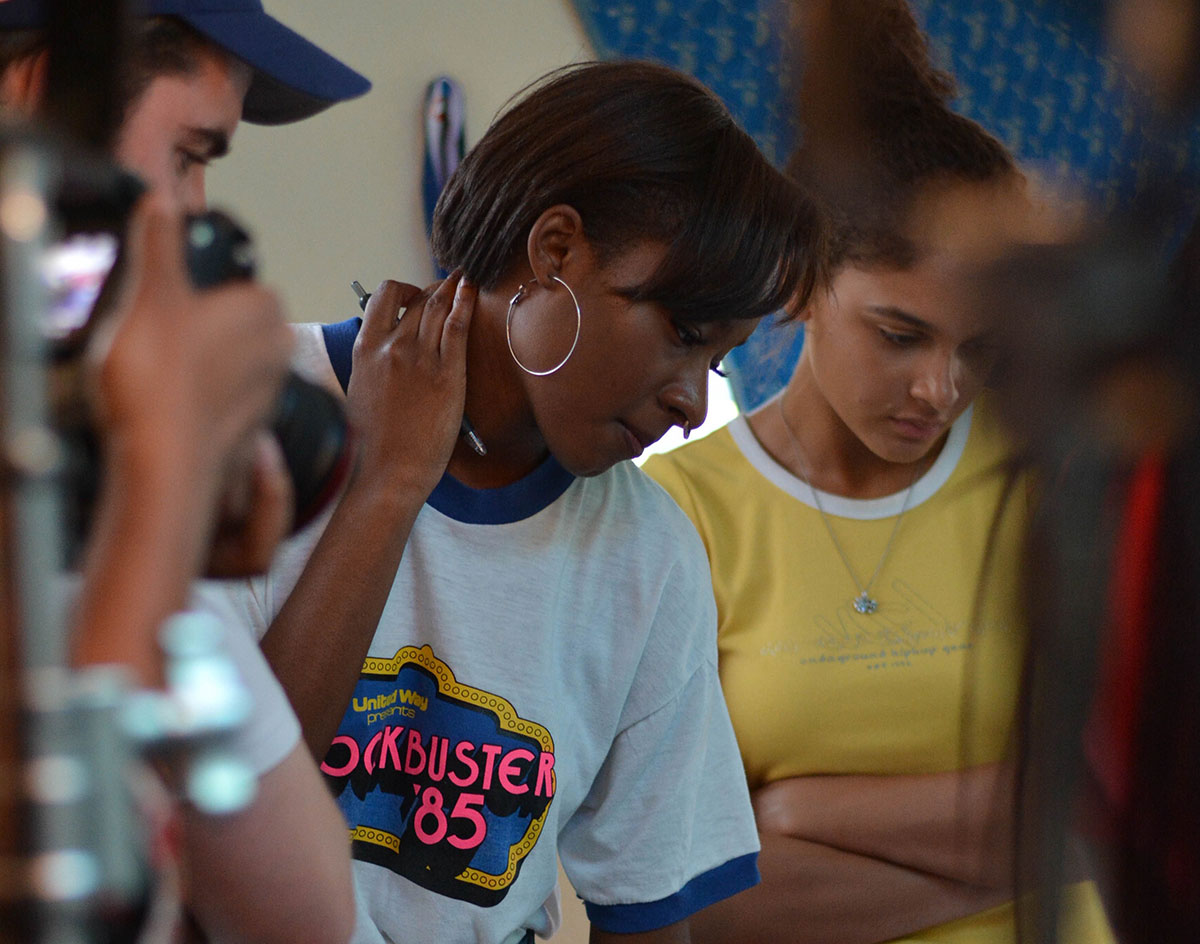 With Ava DuVernay’s Approval And An Award-Winning Short Film Already Under Her Belt, 19-Year-Old Ciara Boniface Is Just Getting Started.

Since she was a 16-year-old high school student in Frisco, Ciara Boniface has been shaping the look of Dallas hip-hop.

Now 19 and a film student at the University of North Texas, Boniface has established herself over the last three years as one of the area rap scene’s go-to music video directors having crafted the visuals for such acts as Devy Stonez, Curtis Mayz, Terrance Spectacle, Lu Sloan and Danny Cainco, just to name a few of the acts who trust her with capture and accurately showcasing their essence on camera.

These days, though, Boniface is earning acclaim from a new source — one of the most prominent directors in Hollywood.

Earlier this month, during the run-up to the release of her much-anticipated A Wrinkle In Time feature for Disney, acclaimed director Ava DuVernay selected Boniface from a pool of more than 1,200 aspiring filmmakers who’d entered a contest meant to support talented young directors like her. For winning the Visionary Filmmaker Contest, Boniface was awarded $100,000 to spend on a future film project, a free car from Nissan and a trip to Los Angeles to attend the premiere of DuVernay’s film — not to mention a serious reassurance that she’s doing exactly what she’s meant to be doing with her life.

On Oscar Day, thrilled to share that a talented young woman by the name of @CiaraBoniface was selected as the winner of our @WrinkleInTime Visionary Filmmaker Contest from @Disney and @Nissan! She gets $100k for her film and a 2018 Nissan Leaf! Go, Ciara! And stay shooting, sis! pic.twitter.com/XXA10P1vXB

For many a young creative, that kind of recognition is borderline inconceivable. And while that was no doubt true for Boniface too, it’s also kind of old hat for her.

When not in class or shooting music videos, Boniface spent most of 2017 working on a short film called Dirty Money. A gritty, visually stunning crime story filled with palpable narrative tension, Dirty Money had already earned awards from five different film festivals before being officially published online for all to see on March 6.

Featuring North Texas rapper Pat Ron as its chief antagonist and prominently featuring a song from incarcerated Arlington rapper Tay-K during a crucial moment in the story, Dirty Money comes off as both a snapshot of this unique time in Dallas-area hip-hop and a powerful introductory statement from a filmmaker on the brink of a promising career.

So how did Boniface get to this point? And where does she see her career going from here? We recently caught up with the promising young filmmaker to find out.

It’s a pleasure to finally speak with you! I’ve seen your name listed for a long time as the director behind some really great Dallas music videos from acts like Terrance Spectacle and Devy Stonez and a whole bunch of others that we really enjoy here at Central Track.
Yeah!

Honestly, I really had no idea at all that you were only 19 years old and still in school — because there’s just such a maturity to the videos you direct. And you’ve been at it for a minute, too! I want to ask you about your music video work in a bit, but we definitely have to start off by talking about the Visionary Filmmaker Contest you just won! First off, congratulations!
Thank you!

Can you start at the beginning and explain how this all came about?
So, I saw it and I was thinking about applying for it it because someone sent the link to me on Twitter. Then I saw Ava DuVernay tweet about it — and that just made me want to apply for it even more. So I just submitted through the link they put out there. This was in late January. They asked me to submit a two-minute video where I just say why I’m a warrior, what kind of stories I want to tell and what makes me unique.

Obviously, your application resonated with the people awarding the prize — you won! That’s got to feel crazy rewarding given Ava DuVernay’s involvement. How did you react when you heard the news?
Honestly, it all felt very dreamlike. I didn’t realize it at first, but there was just one winner — and it was me. I was the only winner out of like 1,200 people. That was really exciting — and then they flew me out to L.A.

And you got to meet Ava there, right?
I did! I got to spend some time with her for a little bit at the party after the premiere of A Wrinkle In Time. That was really cool.

I imagine your friends were pretty jealous of that. Classmates, too. You are studying film, right?
Yeah, I’m a junior in the media arts program at UNT.

But you’re doing a lot more than just taking classes. In addition to shooting music videos, you also just released a really cool short film called Dirty Money. That wasn’t for class, right?
No, it’s something that I did totally on my own. At first, I just wanted to tell a story about a bank robbery — but then it changed a bit because robbing drug dealers was just easier to pull off. [Laughs.]

So, Dirty Money only recently came out, but it’d been through the festival circuit a little bit, right? In some of the promotional materials you’d put out there to hype up the public release, there were icons noting that the film had already won some awards — from the Los Angeles Film Awards, Los Angeles CineFest, the NYC Indie Film Award, the Charlotte Black Film Festival and the Denton Black Film Festival. When did you actually shoot the film?
We finished shooting in August.

Is it just a coincidence that the film came out right after you won the Visionary Contest?
It is. I knew I wanted to release it in March for a little while now, but I didn’t realize when I made that decision that it would end up being even better timing than I could’ve hoped for — just because of everything that’s been happening.

It’s probably weird that some of this information is public but anyone who reads about you winning this prize anywhere can see that it came with a new car and $100,000 to put toward your next project. Do you already have ideas in mind for how to use those funds? What do you hope to do with this door that’s been opened for you?
I actually have plans for another short that I hope to shoot really soon. And then I want to do a feature version of that same idea later on. This will be a different genre, but I’m actually using some of the same characters that were in Dirty Money.

So it definitely seems like you know where you want to go from here, but let’s look back for a moment. How has your music video work helped you grow as a filmmaker? How did you get into that?
It kind of just started off from people asking me if I would do it for them because they knew I was into film. And I just decided to go with that — because it was basically just a job that I knew I could do. But doing that definitely has helping me fund my films and helped me grow with cinematography.

How long have you been doing videos for at this point? When did you start getting that kind of work?
Like the middle of 2015.

That’s amazing. And there does seem to be some crossover between Dirty Money and the Dallas rap scene. You’ve got Pat Ron acting in it, and the short features music from him and from Tay-K.
Yeah, the music was actually an inspiration for the film itself.

Given your history with music videos, do you find yourself drawn to the interplay between the visual and the audio?
I definitely think about that — even starting in pre-production. I find that it really helps with the planning of everything.

OK, so, speaking of planning: You already said you’re shooting another short soon and you maybe have plans to turn that into something longer at a later time. But you’re also still in school. I imagine a lot of your classmates are still trying to find their path — but it sounds like you’re pretty settled and firm on yours, right?
I think so, yeah. I pretty much know the direction I want to go in. Right now, I’m just trying to finish up school. I also want to keep trying to push and create things while I’m doing that. Eventually, the goal is to get that point where I’ve graduated and I have networks and people I know who I can go to in different places .

Like in Hollywood?
Right now, I’m actually thinking that Atlanta is the place to go, just because it’s become such a strong film hub lately.

Do you think you’re going to keep doing music videos?
Honestly, I’m already trying to not do them as much any more. It’s just not really where my passion is. I really want to do my own thing now. And I’m really excited about that.