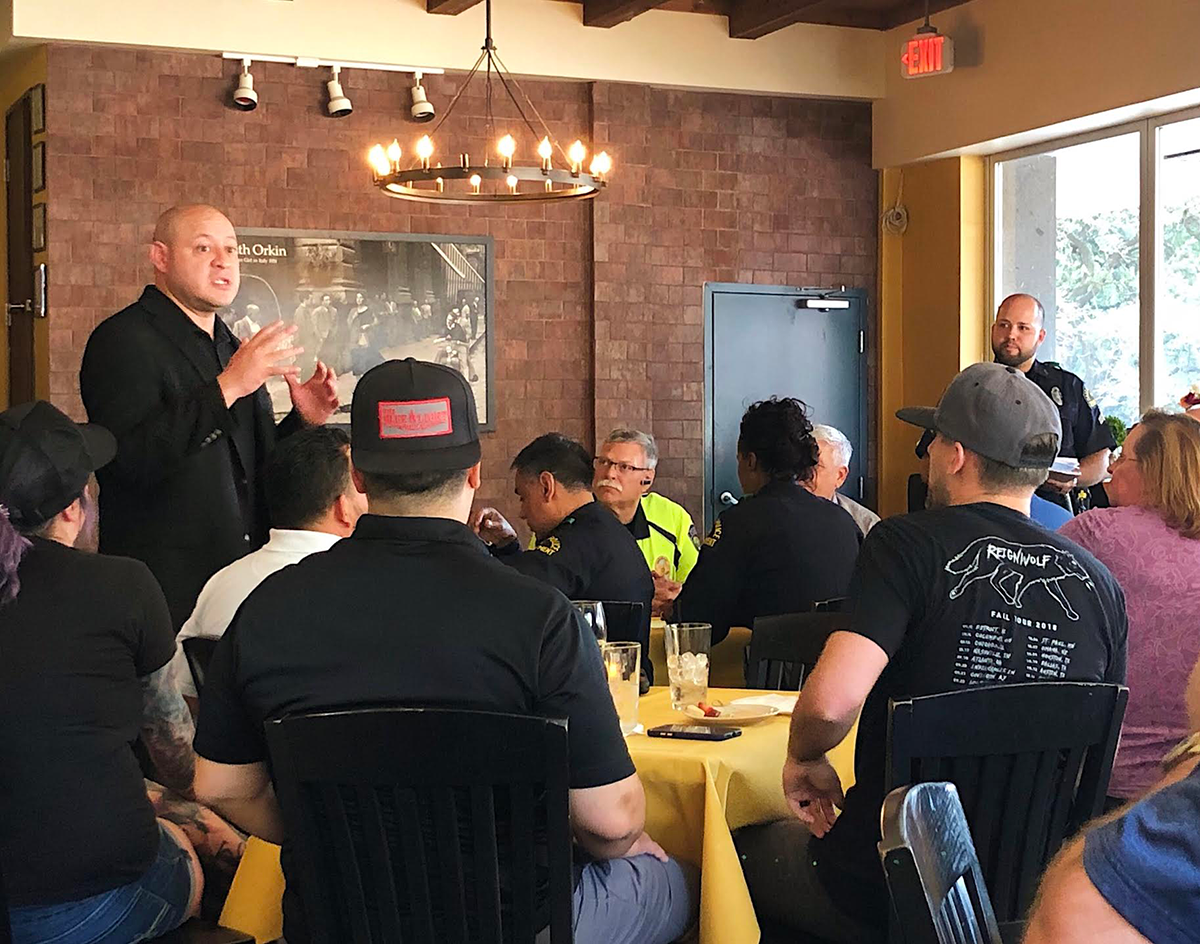 After A Deadly Shooting And Kidnapping That Police Say Wasn’t *Actually* A Kidnapping, Deep Ellum Community Members Are Looking For Answers.

Some 40 people packed into a dining room at Cafe Izmir in Downtown Dallas on Tuesday evening for June’s Central Business District Crime Watch meeting. The event was hosted by Dallas Police Deputy Chief Thomas Castro and Dallas Mayor Pro Tem Adam Medrano, whose district as a council member encompasses this part of town.

The meeting arrived on the heels of Dallas tipping the scale past 100 murders last week, just before two people were shot in a Deep Ellum parking lot during the wee hours of Saturday morning, leaving a 28-year-old man named Adan Lozano dead. Castro told those in attendance that DPD responded to that shooting within 60 seconds.

For the attendees of Tuesday’s crime watch meeting — almost exclusively Deep Ellum workers, residents and business owners despite the event taking place outside of that neighborhood — taking a minute to respond wasn’t exactly their speed, which is to say that there was barely a moment of silence found throughout the hour-long meeting. Instead, Deep Ellumites breathlessly pleaded for specifics from law enforcement regarding plans to strengthen security measures in their part of town, which they feel is becoming increasingly dangerous.

Castro’s response was that the department is already trying its best to keep the entire Central Business District safe — but, between an influx of new patrons shifting from Uptown, and the close proximity that restaurants and bars Deep Ellum offer those crowds, additional offenses are just sort of bound to boost an already-expected rise in crime during the summer months. Rather than address that much further, one officer in the room attempted to shift the room’s attention to the fact that DPD has arrested 11 K2 dealers across the Central Business District (an area that encompasses Deep Ellum, Downtown, The Cedars and parts of Oak Lawn) since May after noticing an uptick in usage of the synthetic drug in the area.

The cop didn’t have much luck with his attempt at a distraction. Few in the room seemed to care much about those K2 arrests, and more were focused squarely on concerns surrounding Deep Ellum’s safety.

Attendees sought answers on multiple fronts — how to increase police presence in the neighborhood on weekend nights, how to prevent shootings like Saturday’s from happening again and, rather specifically, whether there was actually an in-broad-daylight kidnapping that had been rumored to have taken place last week in the parking lot of the 7-Eleven located at Elm Street and Good Latimer.

To that last question, police said they looked into the possibility of a kidnapping — but that they had found nothing substantial in regards to it. Said one officer in attendance after a woman pressed for more information on the matter: “There’s always the other side of the story.”

The room didn’t love that reply. It sparked a back-and-forth debate about the role social media plays in creating hysteria around instances like that one, with the crowd bemoaning what it felt like a lack of transparency between DPD and the community.

“To the point you made about getting both sides of the story,” started a Bomb Factory employee named Damany Daniel, “the only side of the story we heard is that a girl got kidnapped.”

DPD replied that it cannot publicly discuss or release certain pieces of information related to ongoing investigations. Daniel was among the many in the room who didn’t find that retort sufficient.

“Even if you say, ‘We don’t have all the information right now, but as it becomes available, we’ll let you know,’ [that would be better],” he said. “But the problem is, so many times, there’s just not [any communication].”

When the room’s attention turned to Deep Ellum Foundation Senior Manager for Public Safety and Security Phillip Honore, whose role is to serve as an intermediary for communications between police and the community, he largely deflected back onto police any frustrations about his inability to share details about crime in the neighborhood. He can only release as much information via social media as police relay to him, Honore said.

Still, DPD did leave those in attendance with a few promises about how it will up its performance in the neighborhood in the coming weeks. Here’s some of what the department has planned:

DEF also promised to hire more security guards to keep watch over Radiator Alley (the walkway between Main and Elm streets near Chills 360), and to watch over the newly imposed rideshare pickup/dropoff locations from midnight until 4 a.m. on weekend nights. The Foundation also announced a few additional measures to improve safety surrounding that rideshare pilot program:

It remains to be seen whether these promises will come to pass or if they’ll result in an increased sense of security in the neighborhood. But one thing seems certain: Deep Ellumites will let those in charge know how they feel about their efforts one way or another when the next Central Business District Crime Watch Meeting will takes place on Tuesday, July 23, at Monica’s in The Cedars.