Dallas Wings Center Liz Cambage Is The Hero We Need. 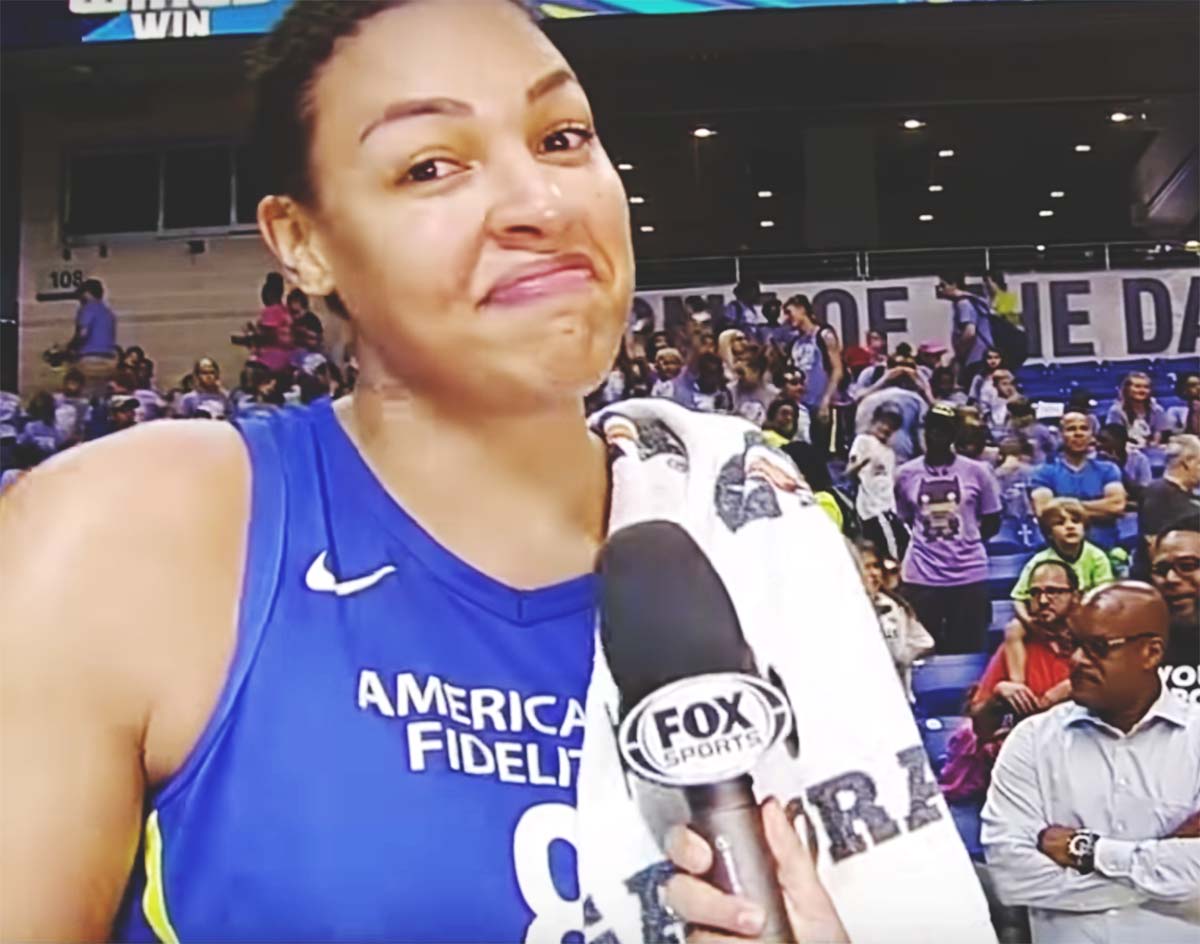 For The Latest Act In Her Wholly Unique Career, The 26-Year-Old Badass Set The WNBA Scoring Record And Did Something That No One Since Michael Jordan Has.

Ever since the Tulsa Shock moved to North Texas and became the Dallas Wings in 2016, the attention thrown the team’s way by casual observers has centered almost exclusively — not necessarily incorrectly — around the considerable talents of point guard Skylar Diggins-Smith.

Well, that all changed yesterday.

In a home game at the College Park Center at the University of Texas at Arlington, the Wings’ 6’8″ Australian center Liz Cambage went the fuck off, setting a new WNBA single-game scoring record by registering 53 points as her team won decisive 104-87 game over the New York Liberty. The victory improved the Wings’ record to 13-9 with just three games remaining before the All-Star break commences.

Most impressive is how Cambage pulled off the feat. Hers was neither a single-faceted performance nor some sort of volume-shooter cash-in: Beyond her 53 points, Cambage grabbed 10 rebounds and notched five blocks over the course of the game; and, offensively, she was clearly in a zone, making 17 of the 22 field goals she attempted (including 4 of 5 three-point attempts) and sinking 15 of her 16 attempts from the free throw line.

To put these numbers in perspective, the last NBA player to score 50 points and grab 10 rebounds while shooting at least 75 percent from the field was Michael Jordan, who did so more than 20 years ago.

All that said, none of this is particularly shocking, considering Cambage’s long-known on-court talents. What is interesting, however, is the path that the first female basketball player to dunk in the Olympics took to get to this point.

Tulsa drafted Cambage with the No. 2 overall pick in the 2011 WNBA Draft, and she was named a WNBA All-Star in her rookie campaign. But the following year, Cambage — who has been outspoken about the unfair pay of female athletes in America, and particularly in the WNBA — left the Shock, opting instead to earn a $295,000 salary playing for a four-month stint in China. Then in 2013, she returned to the Shock only to again leave the team after the season — seemingly for good this time — in order to play in Australia and China at her leisure, removed from the rigors of the WNBA while at the same time debating whether life as a professional basketball player was even the life she wanted for herself.

Prior to the start of the 2018 season, though, Cambage surprised American and international basketball fans alike by committing to return to the American organization she once left. Her decision, Cambage made no bones about, was based on the currently Dallas-based team going all out in their recruiting her back into the fold — efforts that included a trip to Dallas that featured visits to AT&T Stadium and a private tour of gospel singer Kirk Franklin’s Arlington music studio. The trip left Cambage excited about the chance to live in and experience the Greater Dallas area.

But it seemed Cambage was also influenced by the fact that she had some unfinished business — wanting, in particular, to prove to her detractors that her time away from the WNBA hadn’t lessened her abilities and that her successes during that time in China and Australia weren’t simply the result of playing against lesser competition. She made that much clear in the post-game interview after her record-breaking performance:

It’s doubtful Cambage has any doubters remaining after Tuesday’s showing. The effort moved Cambage into second-place in this WNBA season’s points-per-game race, her 21.4 points per game trailing only Breanna Stewart’s 22.5.

Turns out, though, setting the scoring record was just the first highlight on a banner day in Cambage’s basketball career.

Shortly after the game against the Liberty ended, the WNBA announced its 2018 All-Star teams and revealed that Cambage, along with her teammate Diggins-Smith, was among those honored. It will be Cambage’s second All-Star appearance, and Diggins-Smith’s fourth.

So, after all that, how did Cambage celebrate this fine day? Well, per her Instagram Stories posts, she did so by visiting Takashi Murakami’s “The Octopus Eats Its Own Leg” at the Modern Art Museum of Fort Worth. For someone who so clearly plays basketball and lives life on her own terms, that sounds like the perfect end to a marvelous day.