Dallas’ Public Menace Of The Year. 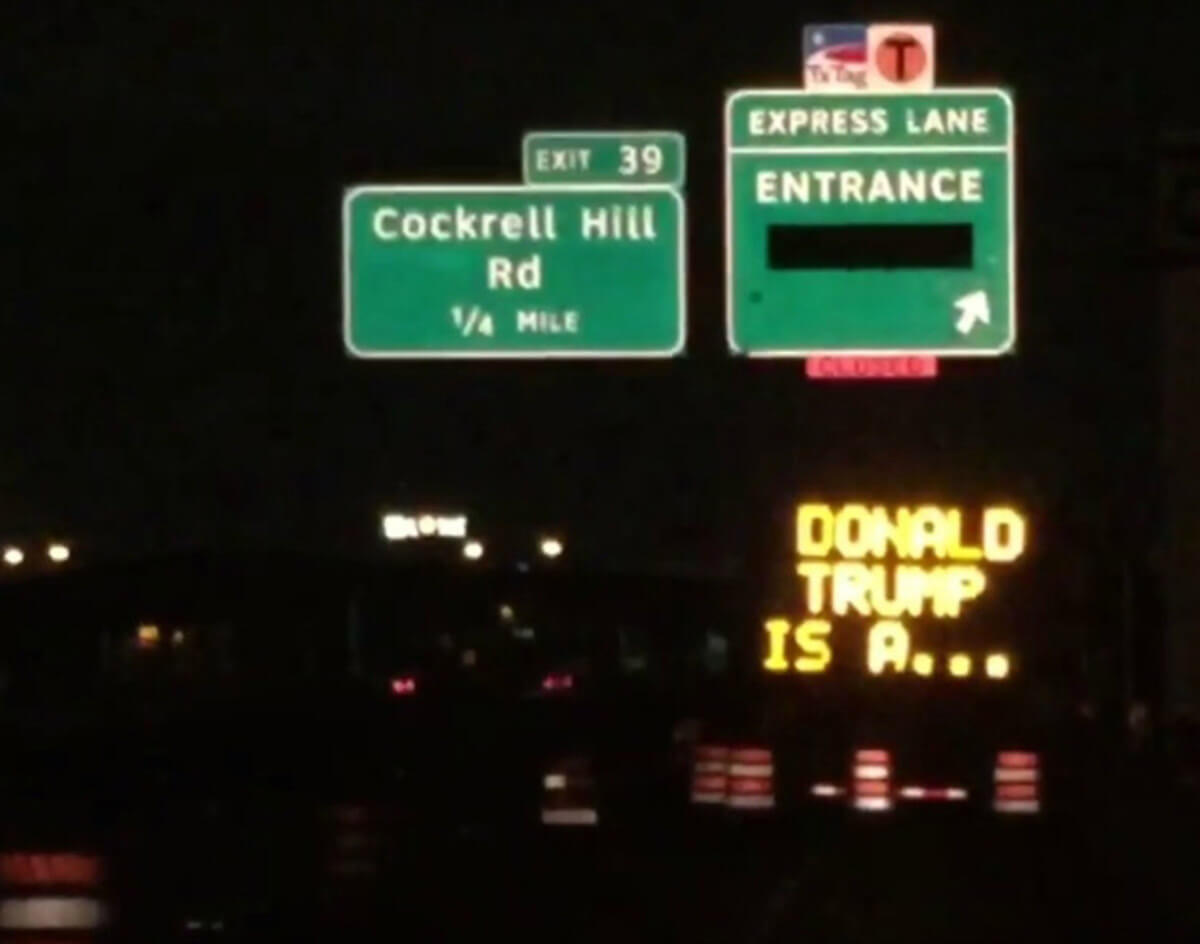 Here’s what we know about the mysterious hijacker – or hijackers – of different TxDOT signs in the area in 2016:

These stunts have been going on for a while. We covered it when a TxDOT sign was maniplulated back in July 2015 to read “Deez Nuts,” and a Jalopnik post dating all the way back to 2009 clued people in on how to wreak this kind of havoc themselves.

What we don’t know is who’s actually to blame for this year’s posts – or who to credit, if you’re enjoying their antics as we are. Also, we just frankly don’t know how many people are behind this; while we can’t prove that these hacks were not done by the same person each time, it does seem weird to think that “Deez Nutz” and the political call-outs were done by the same person.

But what makes us so inclined to enjoy the antics of our roadside prankster(s)? One possibility is that TxDot signs mostly tend to be associated with roadside construction, which can feel ever-present on our roads, and is frequently connected to some sort of congestion. Taking the signs down a peg won’t make our commutes shorter – actually, between the loss of possibly pertinent information and the gawkers taking pictures of them, we might be spending more time on the roads than we would if nothing was wrong. On the other hand: Hey, if you’re already irritated by a delay, that tinkered-with sign could be some symbolic mud in the eye you’re happy to see TxDOT endure.

These hacks could simply be yet another symptom for a growing impulse to disrupt the order of things. Sometimes people seek to make big disruptions — like, uh, voting for a damn shape-shifting lizard with no political experience to be our president. (Again, people have seen signs claiming that Donald Trump is a shape-shifting lizard, and it would be wrong to just ignore that.) Other times, people seek to make small disruptions and pull a Harambe joke from the Internet out onto the side of the road.

Our fondness for the signs’ content could also tug at our sympathies, but – if we’re being honest – what they produce is pretty hit-or-miss. The post-election shot at Donald Trump was a welcome sight. Making light of Harambe’s death? That’s just mean. (Oh, and the less said about the uninspired use of “Deez Nutz,” the better.)

Another @TxDOT traffic sign hacked in Dallas. This one on Cedar Springs in Uptown reads “gorilla deserved it.” pic.twitter.com/3NqQeoEjKa— CBSDFW (@CBSDFW) June 5, 2016

Perhaps we just like the TxDOT sign hacker because, in 2016, we desperately needed something to lighten the collective mood around here. We’ve spent most of the year wading through social media posts about one celebrity death after another. We continue to see disturbing stories about police violence, and Dallas was host to the most deadly day for law enforcement since September 11. Our national politics turned toxic (and our election apparently hijacked by the Russians, which is a much bigger and more alarming story about hacking), and we still aren’t really recovered from that pandemic of fake news stories that hit our Facebook feeds. Distilling politics and Internet humor into something that fits on a construction sign is, arguably, a sign of collapsing social order, but at least it’s a mostly benign and sort of charming one.

We may never know the identity of the person (or people) responsible for hijacking various TxDOT construction signs found on different area roads, which is good news for that person (or, uh, those people), because we are definitely talking about a punishable act.

In May of this year, an Austin man was caught and charged with manipulating a construction sign to read “Drive crazy, y’all.” According to the reports, the person caught in the Austin case was able to make the change because he guessed the password. Different stories have been quick to point out how easy it tends to be to crack the code of these roadside signs. It seems there’s rarely much thought put into the user name and password. But considering we’re talking about a problem that’s been going on for a while now, no one seems to be in much of a hurry to put a stop to it.

Here’s a crazy thought: If the issue is serious enough to call for someone’s arrest, maybe you should come up with a better password? Maybe if TxDOT put a little effort into protecting their signs, they’d show us they’re taking this a little more seriously than the rest of us, y’know?

Then again, maybe these oversights aren’t an accident at all. Maybe TxDOT, like the rest of us, kind of likes seeing these little breaks from ordered life. 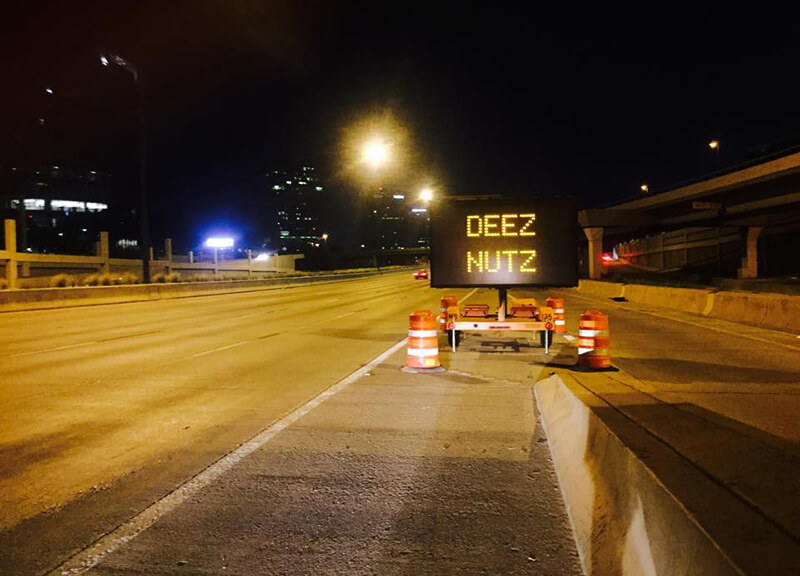