The Hits Keep On Coming For The TxDot Hacker And Their Harambe Humor.

Over the weekend, our favorite mischief-making hacker struck again.

On Saturday, motorists on Cedar Springs in Uptown noticed a TxDOT sign that had been altered to read “Gorilla deserved it,” a reference to the 420-pound gorilla named Harambe that was gunned down at the Cincinnati Zoo after an escaped three-year-old got loose in his enclosure.

Another @TxDOT traffic sign hacked in Dallas. This one on Cedar Springs in Uptown reads “gorilla deserved it.” pic.twitter.com/3NqQeoEjKa— CBSDFW (@CBSDFW) June 5, 2016

The prank comes just weeks after a trio of signs around Dallas were altered on Memorial Day Weekend to read “Trump Is A Shape-Shifting Lizard,” “Bernie For President” and “Work is cancelled. Go Back home.” Those hacks, meanwhile, came a little less than a year after yet another Dallas sign was changed to read “DEEZ NUTZ.”

Is it possible that these pranks aren’t all coming from the same person? Actually, it’s pretty likely they’re not: Guides on how to break into these types of signs have been prevalent on the internet since at least 2009 — and, apparently, it’s a pretty easy task. In a 2014 piece on his blog, cybersecurity analyst Brian Krebs notes that the factory default passwords are rarely changed on these units and that a simple password cracker can often be used to gain remote access into their text systems. More often than not, though, the password is just the laughably simple “DOTS.”

Too bad Texas Department of Transportation workers don’t find these “attacks” very funny at all. Last month, a 26-year-old Austin man was charged with criminal mischief — a third-degree felony punishable by up to 10 years in prison — after he changed one of these signs to read “Drive Crazy Y’all,” because, according to an affidavit, he thought it was humorous.

On that last point, we’d tend to agree. C’mon, this stuff is humorous, whether it’s stemming from one source or many.

1 of 2 political messages displayed on hacked @TXDOT signs in west Dallas this AM. @TimCiescoNBC5 tweeted the other pic.twitter.com/PcDk9jGCyD— Ben Russell (@BenRussellNBC5) May 31, 2016

And we have a third hacked sign – though I think this one is a little less divisive politically. #Dallas @nbcdfw pic.twitter.com/TUp1Vj2M1G— Tim Ciesco (@TimCiescoNBC5) May 31, 2016

I don’t think @TxDOT really meant to send this msg to drivers off i30 today in Dallas. ðŸ¤”. Spotted today pic.twitter.com/IKZ6EHeoyQ— Michelle Rodriguez (@michrod) May 30, 2016 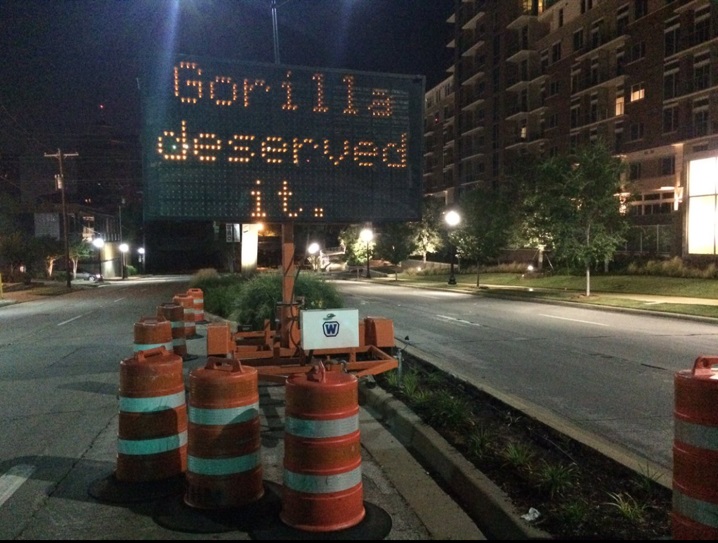