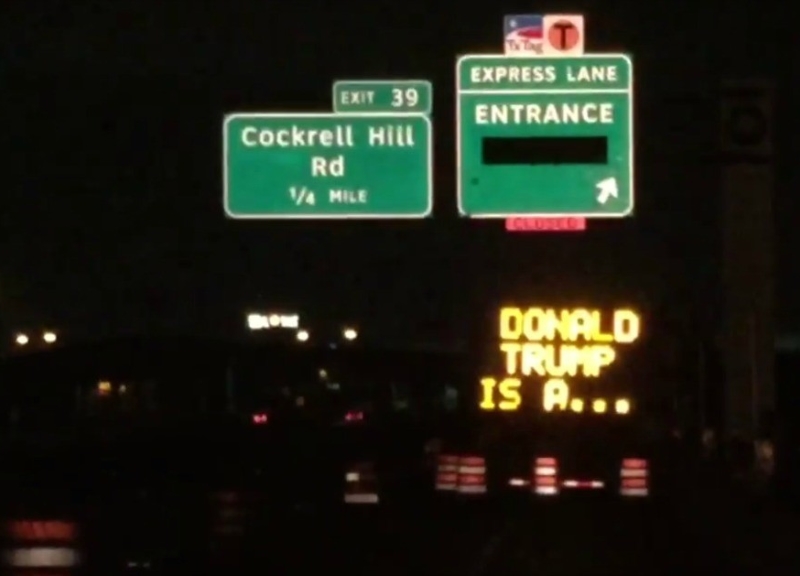 The TxDOT Hacker Strikes Again, This Time With Trump-Related Humor On I-30.

What a long strange trip this election season’s been already. From stabby Ben Carson to the wife-punching of Zodiac Killer Ted Cruz and Trump’s Freedom Kids, the hits just keep coming.

And over the weekend, for the second time this election cycle, a Dallas hacker used their powers for good — or hilarity, at least — when they changed portable TxDOT signs to reflect their own humorous messages. Instead of informing motorists about lane closures and the like, NBC reports that some signs on I-30 near the Cockerill Hill exit were changed to read “Bernie for President” and “Donald Trump Is a Shape-Shifting Lizard.” A third sign closer to the Westmoreland Road exit read “Work is Canceled — Go Back Home.”

This, it should be noted, is not the first time road signs have been humorously altered in recent memory. Last summer, you may recall, a hacker — the same one, maybe?! — changed a TxDOT sign on U.S. Highway 75 near the Walnut Hill and Northwest Highway exits to read “Deez Nutz,” at just about the time that an independent candidate going by the same name started outperforming some republicans in early voting.

Same culprit or not, whoever did it was very bold, indeed. The signs have to be changed manually and can’t be manipulated remotely — as far as anyone in charge knows anyway. And with bold actions come bold consequences: Tampering with TxDOT signs, authorities say, is a third-degree felony.

Meanwhile, there’s no word yet on whether Trump actually is a lizard person, although we’re sure Louis C.K. has some thoughts on the matter.