Dallas’ Culinary Crime Of The Year. 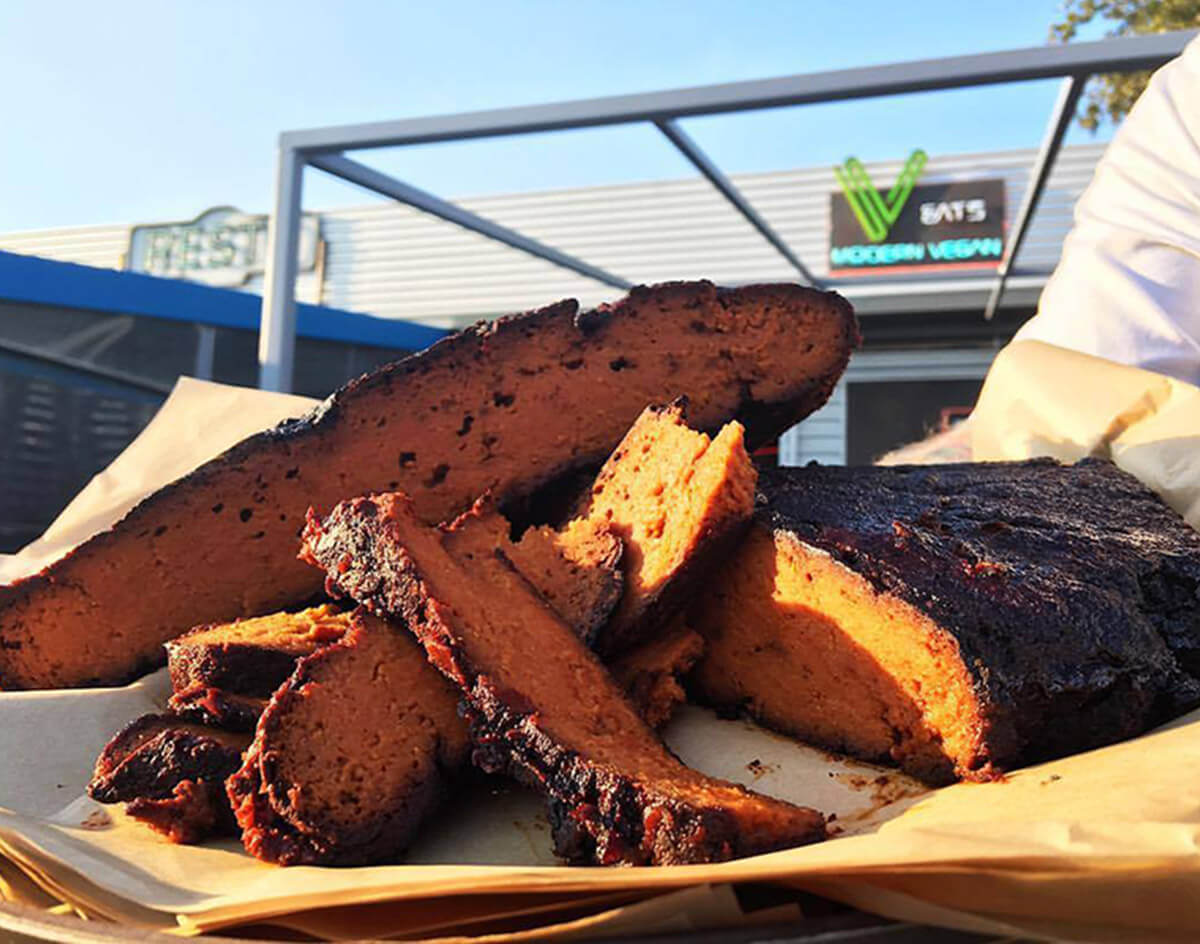 This Year, V-Eats Had the Nerve to Take a Barbecue Staple’s Name in Vain With Its Vegan Brisket (Even If, We Admit, It’s Pretty Tasty.)

The dining area at V-Eats has a cozy, unassuming charm. It’s filled with warm earth tones and a minimalist decor that ensures a relaxing atmosphere.

But you’re probably not reading this to learn about the ambiance. No, you, like so many other meat-eaters, likely only discovered V-Eats after it was revealed they had something called “vegan brisket” on their menu.

So, sure, there was plenty of rancor online when news of the item was released. But the Dallas Observer gave it an honest chance, and liked it, even though they were quick to confirm that the menu item wasn’t doing a great job mimicking real brisket. Other reports leaned on the hostility some of our nation’s carnivores felt over the name: Fox News even called it out because veganism’s association with liberal values means that a headline with the words “vegan brisket” will seize their target audience by the throat, and squeeze.

While the name might smack of fraud, it wouldn’t be very sporting of us to take shots at V-Eats’ creation without giving it a chance ourselves. And so we set out to similarly try the dish, too.

First, though, let me say this: Personally, I see animal consumption as a feature of nature — not a bug, although I’m not someone who rails against vegan dining as some kind of moral failing. In other words, I didn’t set out to try this vegan brisket when the story first broke, but it’s not like my editor had to hold my mouth open and force me to eat it, either.

Meat’s plucky understudy in this dish is seitan, a product comprised of wheat gluten, which means this dish is verboten to the gluten-free, as well as proud barbecue devotees. Appearance-wise, the vegan brisket comes close to the real thing, but rings false. The interior looks more like bread than meat, although it takes a moment for that to register.

Also: Ordering the vegan brisket as a stand-alone entree isn’t a menu option, turns out. And so I went with the brisket sliders. (You also have the option of eating brisket tacos, or having a brisket sandwich).

Keeping their brisket linked to a sandwich or taco made sense after eating the sliders, as the non-meat product doesn’t really stand up to scrutiny by itself. It’s not that it has an unpleasant taste, it’s just that the shortcomings are harder to hide when it’s exposed. The vegan brisket can’t provide the marbled texture of actual beef, and it’s missing some of the deeper flavors of smoke and fat that genuine bovine provides. Still, the seitan-based alternative wears its seasonings and sauce well, and it fits within the sandwich nicely.

If you’re looking for an expert forgery of actual pit-smoked cow, this isn’t quite it. However, when you let go of your expectations and take it as just an animal product-free dish, it’s a winner. The sliders have a different flavor, sure, but that difference isn’t wildly off base, and it’s not bad. The sauce they use has a tangier, more acidic quality than typical barbecue sauce, which helps offset the drop in fatty, savory notes you suffer when you choose cruelty-free over inevitably cruel ingredients.

So why use a name like “vegan brisket”? Was this an attempt to provoke those of us who don’t shy away from consuming animal flesh, or just evidence that this spot has lost sight of what meat actually tastes like?

Honestly, the answer is probably pretty mundane: There’s a robust market for vegan spins on classic dishes. V-Eats has several other dishes that bear the name of non-vegan items. A cursory Google search can quickly connect you with recipes for familiar dishes that no longer include ingredients from anything in our Taxonomic Kingdom. Also, places that serve burgers frequently offer some sort of alternative vegan or vegetarian patty, which suggests that people in the actual restaurant business are less dogmatic about the integrity of meat items than the folks who were up in arms over a vegan brisket.

Whether they saw it coming or not, the controversy surrounding this dish has indeed been good for helping spread V-Eats’ name. You and your pals might have had cathartic fun ragging on V-Eats and vegan brisket, but while you were doing so online, you were unwittingly broadcasting to the vegetarians and vegans in your social circle about a new spot they might like to try. And it’s not like the decision is going to cost them business; the people taking to Twitter and Facebook to rant about the misuse of the word brisket probably weren’t their target audience anyway.

So, yeah, we could all cluck our tongues and fret over how our culture is being usurped by political correctness and the like, but maybe, after a year that’s felt like one drawn-out political argument (occasionally broken up by news of yet another celebrity death), we should let this one slide. Does the name “vegan brisket” feel right? No. But it’s a benign offense, especially when you compare it to the awful things done by the most awful people in the area this year.

Plus, V-Eats deserves some credit for having pushed everyone’s buttons the way they did. Our meat-scarfing culture constantly writes off vegan food as the diet of people who get nosebleeds when they try to read Tom Clancy books, but here’s this vegan joint in Trinity Groves showing the nerve to kick one of our biggest and most vaunted of hornets’ nests by profaning barbecue.

They may not have it in them to eat anything with a face, but V-Eats showed real chutzpah when they made Dallas — a place typically usually associated with red meat, Mexican food, and (thanks to the State Fair) Fried Anything — the home of the vegan brisket.