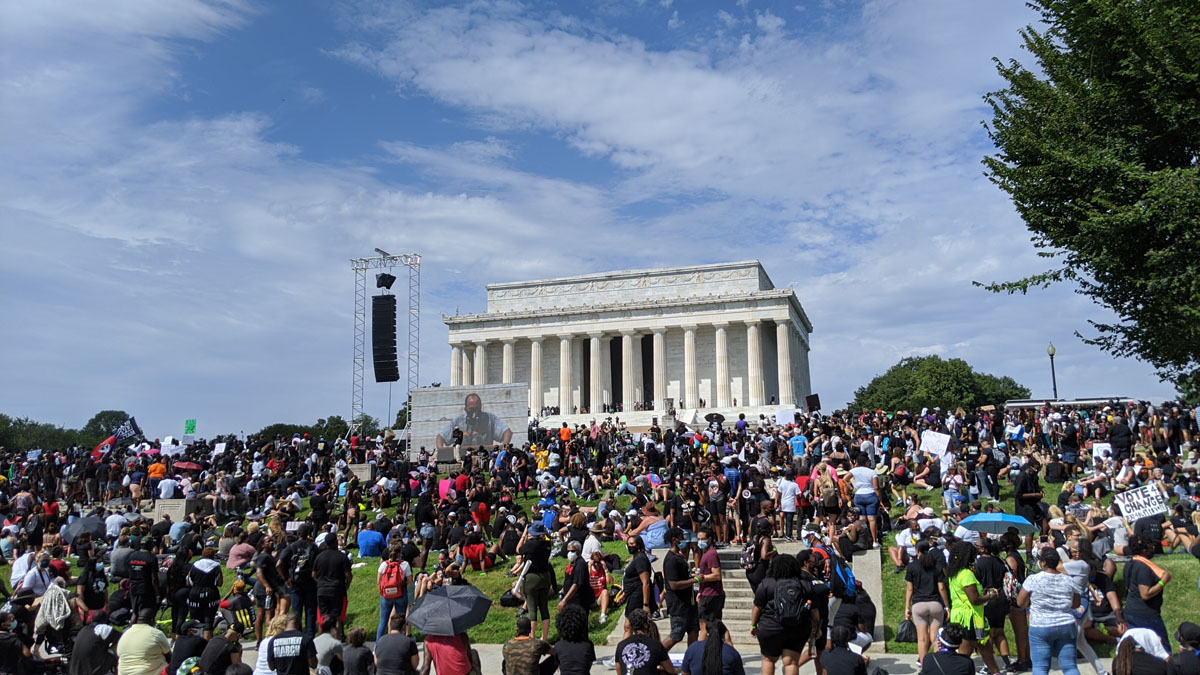 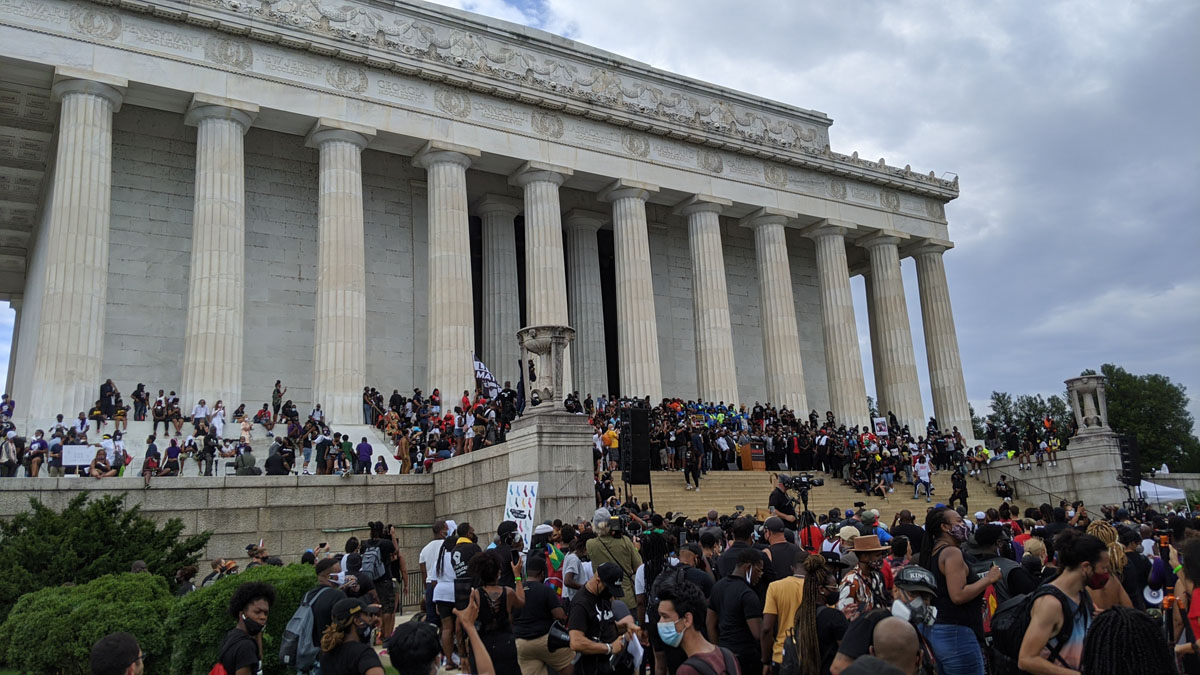 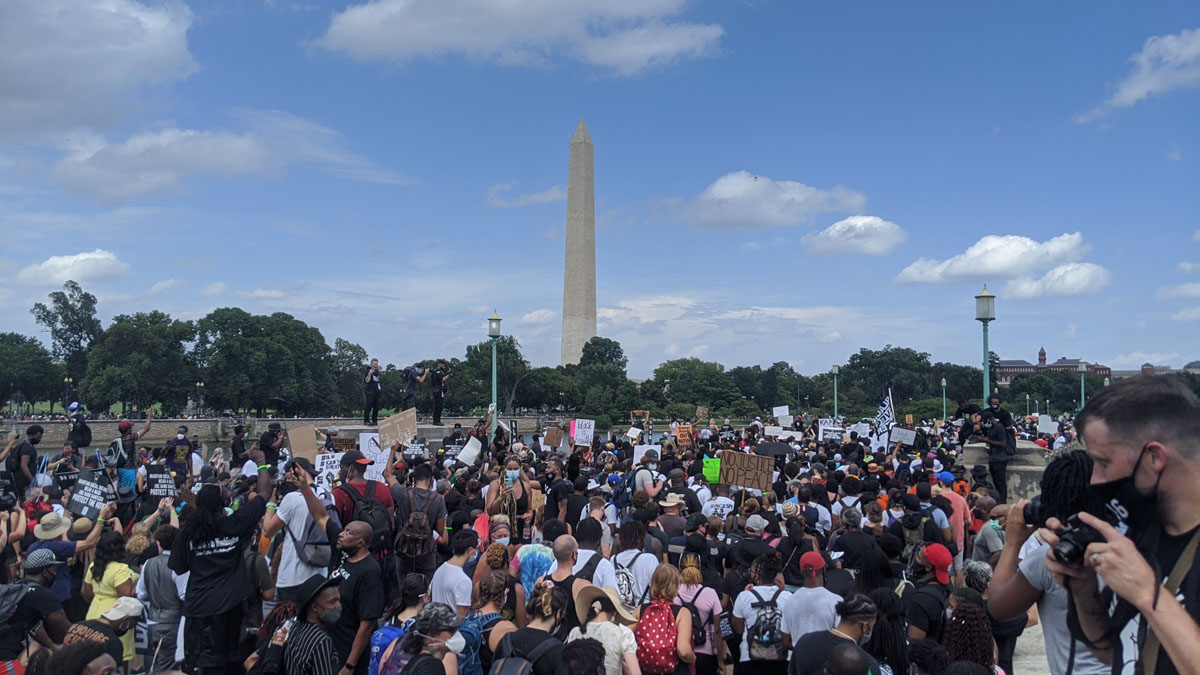 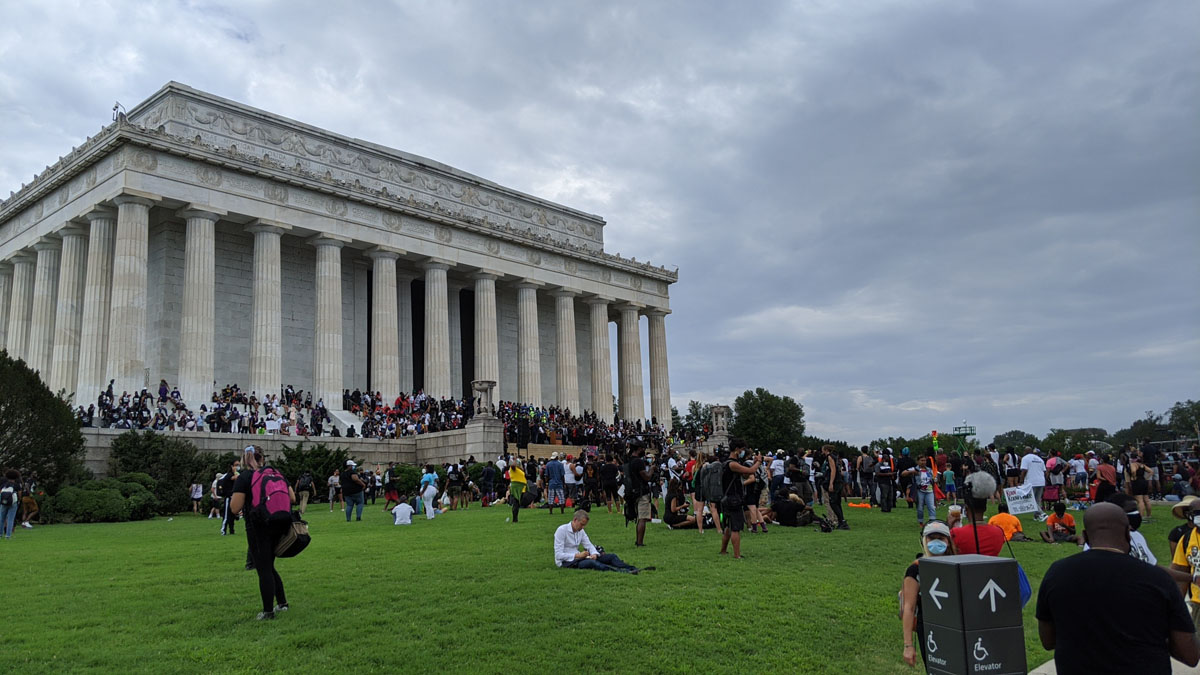 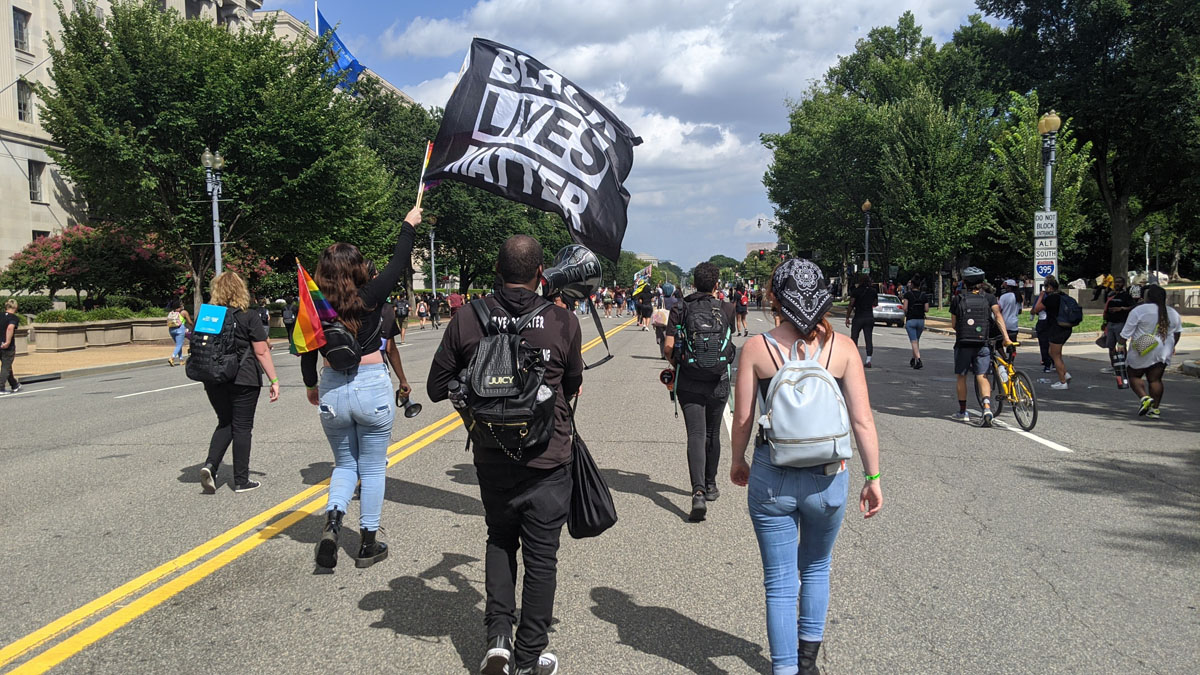 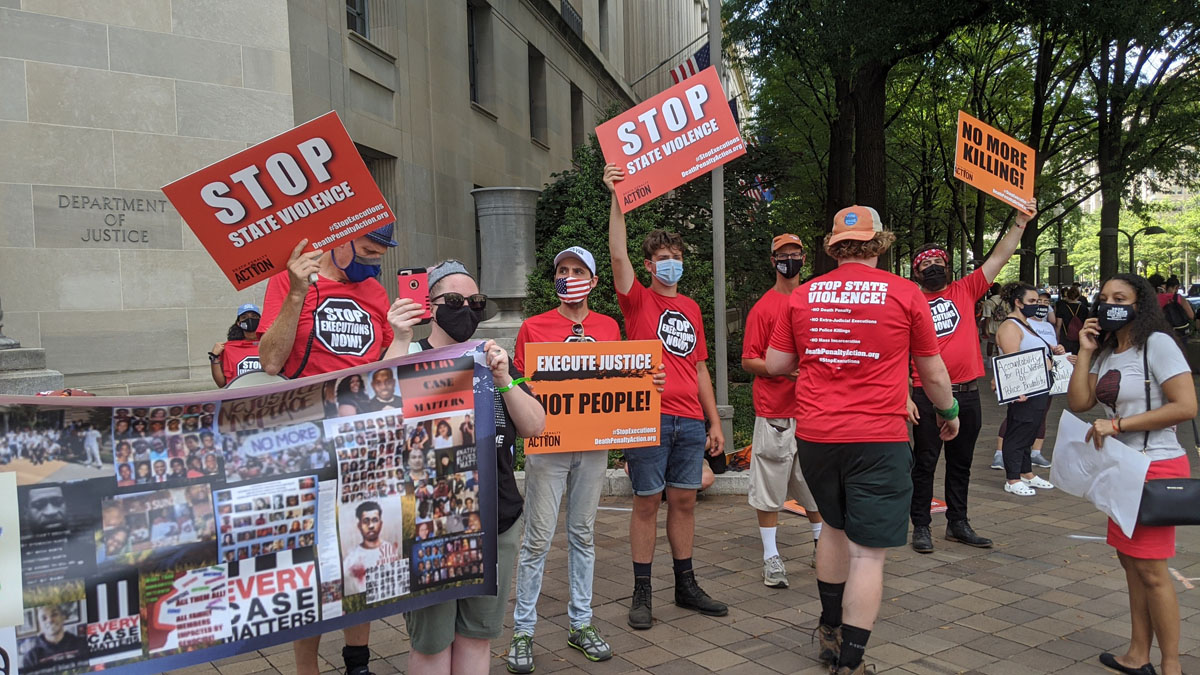 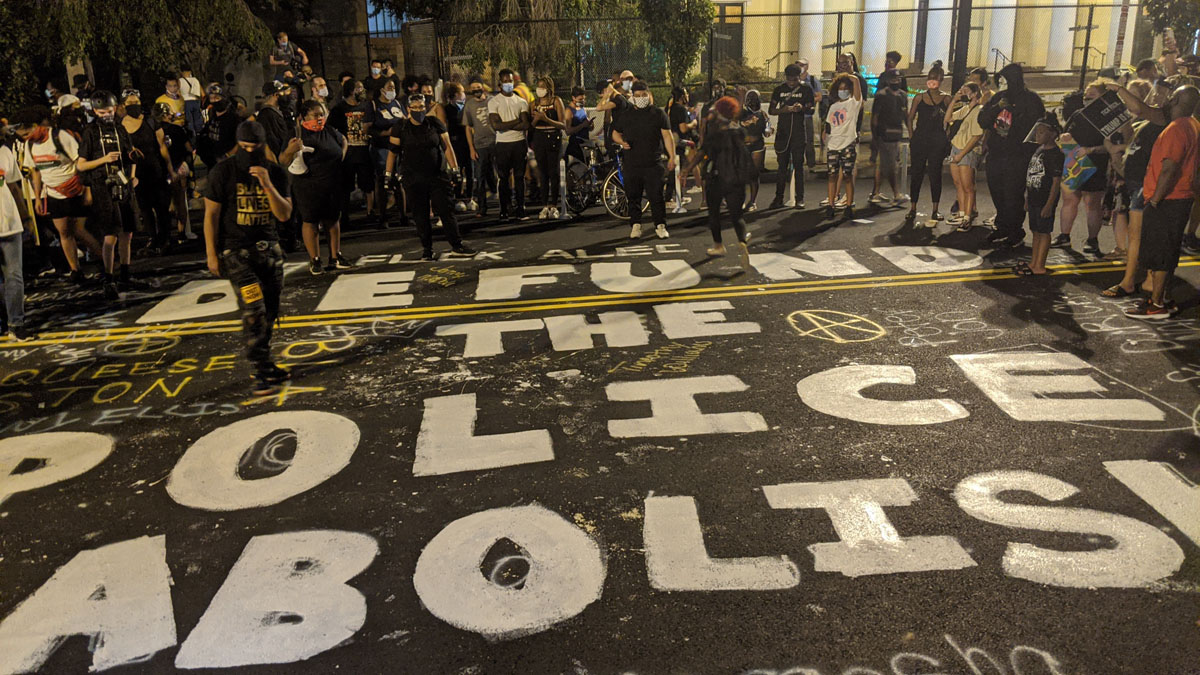 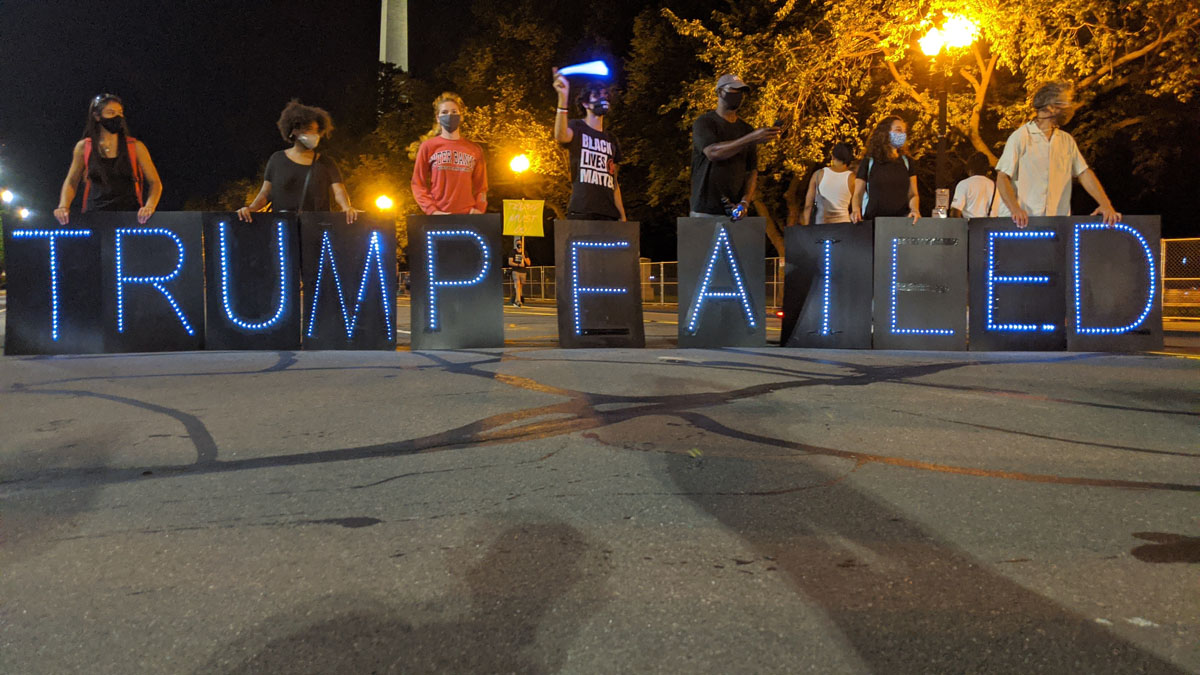 Some 30 Dallas Protesters Traveled To Washington, D.C. To Participate In This Past Weekend’s Commitment March. Here’s What They Experienced.

WASHINGTON, D.C. — On Friday, August 28, tens of thousands gathered around the Lincoln Memorial in Washington, D.C. for the Commitment March that commemorated the 57th anniversary of the historic 1963 march led by Martin Luther King Jr. on this same site.

Among this crowd were more than 30 Dallasites who represented at least four of the area-based organizations that have been protesting police brutality in Dallas since earlier this summer.

Central Track was able to join this group on the scene in Washington, to document their efforts and to speak with several of the groups afterward as they reflected upon their experiences at this historic gathering.

Though some attendees flew to Washington for the event, many made the almost 20-hour drive from from Dallas to D.C. while dealing with heavy rains from the northern edge of Hurricane Laura for several hours along the way.

“In spite of the rain, we drove to the campground outside of DC as originally planned,” says Katy Mead, an organizer with a Dallas-based group People Against the System that primarily holds education events.

Upon arriving at the National Mall where the Commitment March was being held, Meade said her group excitedly “ran into other D-FW people by chance at the Vietnam Memorial.” This was a common theme for most of the Dallas protesters with whom we spoke that had also made the trek to the D.C. event.

It was certainly the case on Thursday night, as hundreds gathered in Black Lives Matter Plaza and around the White House for a Drown Out Trump protest aimed to disrupt his nomination acceptance speech for the RNC on the South Lawn — controversial for its blatant violation of the Hatch Act (among other reasons).

Among those protesting there that had earlier made their voices heard in Dallas were the Hoop Bus team — which we’ve previously written about — and Pamela Grayson, a Dallas-based activist and the director of the Collective Activism Social Justice Coordination Center.

Grayson was out protesting in D.C. alongside her son on both Thursday and Friday. The events on Thursday night were particularly festive, Grayson notes.

“The best parts were the events at Black Lives Matter Plaza,” Graysom says. “There were vendors, music, and a repainting of the plaza to display an additional message [of ‘Defund the Police’]. There was also a communal performance of the electric slide.”

On Friday, tens of thousands gathered for the speeches at and marched through the National Mall. Many made it all the way to the Department of Justice, outside of which stood anti-death penalty protesters. Others gathered in the street around a truck for an impromptu concert.

More than a dozen members of the Dallas-based Next Generation Action Network (NGAN), which organizes protests and events focused on police brutality (among other efforts), attended those Friday speeches and also participated in the Friday march.

“It was a great experience to join together with other organizers and activists, as well as politicians and everyday people,” says Dajai Monae, the second vice president of NGAN, of the experience. “There were many different generations coming together and being allowed to speak, all the way down to an eight year old.”

Sheema, an organizer with the Dallas-based group called We Take The Streets that protests police brutality primarily through marches in Dallas city streets, took similar heart in what she saw in D.C.

“The highlight of the march was seeing people from all over come together,” Sheema says. “Seeing America come together in spite of a global pandemic because Black lives matter — with ages running from babies to the elderly — it was beautiful and truly unforgettable.”

Though many demonstrations continued into Friday evening throughout the city, a sudden heavy rain later in the night cleared out most of the streets — save for a small crowd outside of the White House in Black Lives Matter Plaza. Friday night’s events ended without incident.

While many of the Texans who participated in the activity in D.C. started their treks home on Saturday morning, others remained in Washington for another set of protests on Saturday evening — including Monae and a number of her fellow NGAN activists. Unfortunately, as has been reported elsewhere, Saturday evening’s events took a violent turn as police deployed mace and tear gas to clear out Black Lives Matter Plaza.

“It was a peaceful protest,” Monae says, “but I was gassed and maced.”

Thankfully, Monae says she was not seriously injured, and made it back to Dallas safely.

“We are angry [about what] happened,” she says, “but we came back more motivated to keep fighting for justice.”

Sheema with We Take The Streets echoed that sentiment when remarking on the unfortunate end to the weekend’s overwhelmingly positive and peaceful events: “The police got rowdy with protesters and unleashed tear gas, pepper spray and flash bangs on the crowd, sending us home with a reminder: It does not stop here, and we must keep fighting.”

All photos by Steven Monacelli. Davy Jay contributed to this report.