The Hoop Bus Is Dunking On Racists Across The Country. 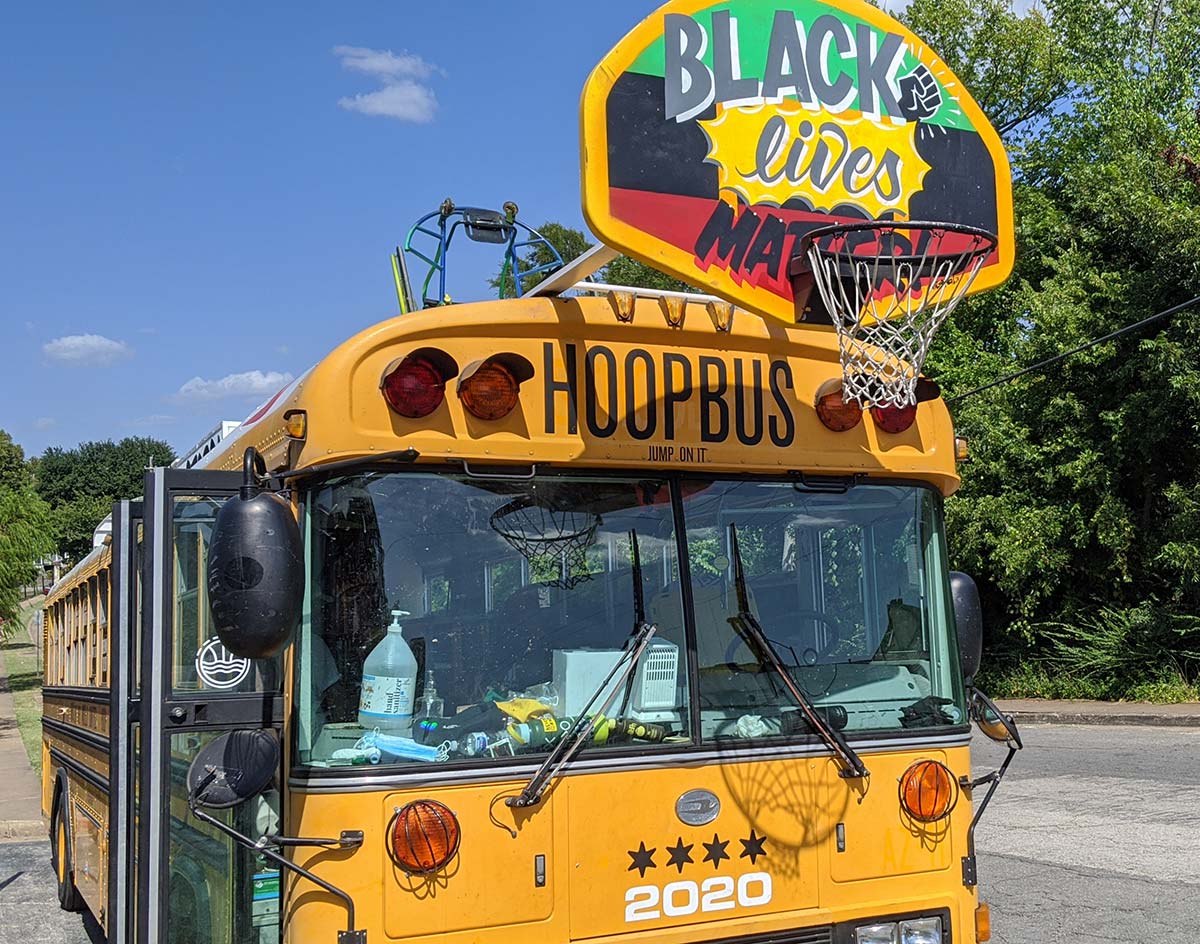 The 30-Person, Hoops-Loving Caravan Renovated A Rundown Basketball Court And Linked Up With Protesters In Dallas Last Week As Part Of Its Nationwide Tour.

On Friday, August 14, over 200 people gathered to celebrate the much-needed renovation of a worn-down basketball court in the Highland Hills neighborhood of Dallas. An entire suite of events was planned — a dunk contest, a kids clinic, free food and even voter registration — as part of the late-afternoon event, which ran for over five hours despite the triple-digit heat.

The event was organized by The Hoop Bus, a group of misfits traveling the country to spread a message of peace, love and basketball. The group’s nationwide road trip will culminate in Washington, D.C., where the bus will link up with the Black Lives March on Washington on August 28, 2020.

As previously reported by the Athletic, an unexpected group of folks brought the hoop dream to life. Two of the founders, Nick Ansom and Eliot Robinson, met at an NBA All-Star Weekend event in 2018, and they then brought in Nate Kelly, who had helped Ansom run the Veniceball basketball summer league on the Venice Beach courts.

The team eventually raised the funds to create the Hoop Bus, a super-long modified school bus that’s been tricked out with backboards and rims for pickup games. It’s also been decorated with a host of Black Lives Matter slogans and murals so it can be used during marches and protests. Often joining the bus is the R-Beats Van, a modified sprinter van featuring a Black Lives Matter mural and a DJ sound system, which the Hoop Bus crew uses to enliven their events across the country. 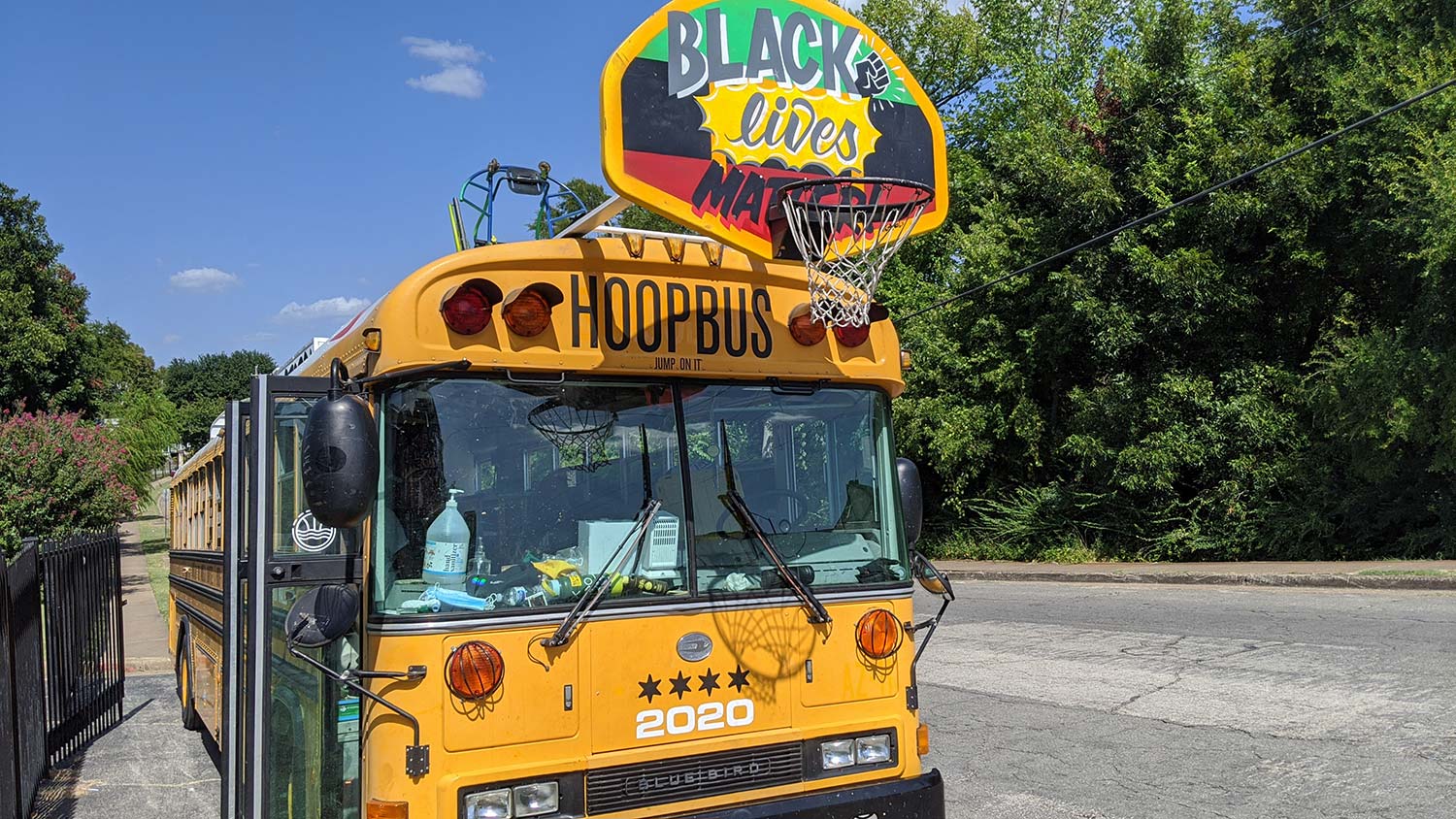 Even more colorful than the tricked-out caravan or the unusual founding team is the cast of characters that accompany the bus and puts in the work to renovate the courts. They include street ballers, former pro players, activists and even the legendary Venice Beach busker Harry Perry.

Last Friday’s stop in Dallas had not initially been on the Hoop Bus’ route — Houston was its only slated stop in Texas — but a childhood connection, and a partnership with American Natural Gas, helped the Hoop Bus make a pit stop before heading further south. 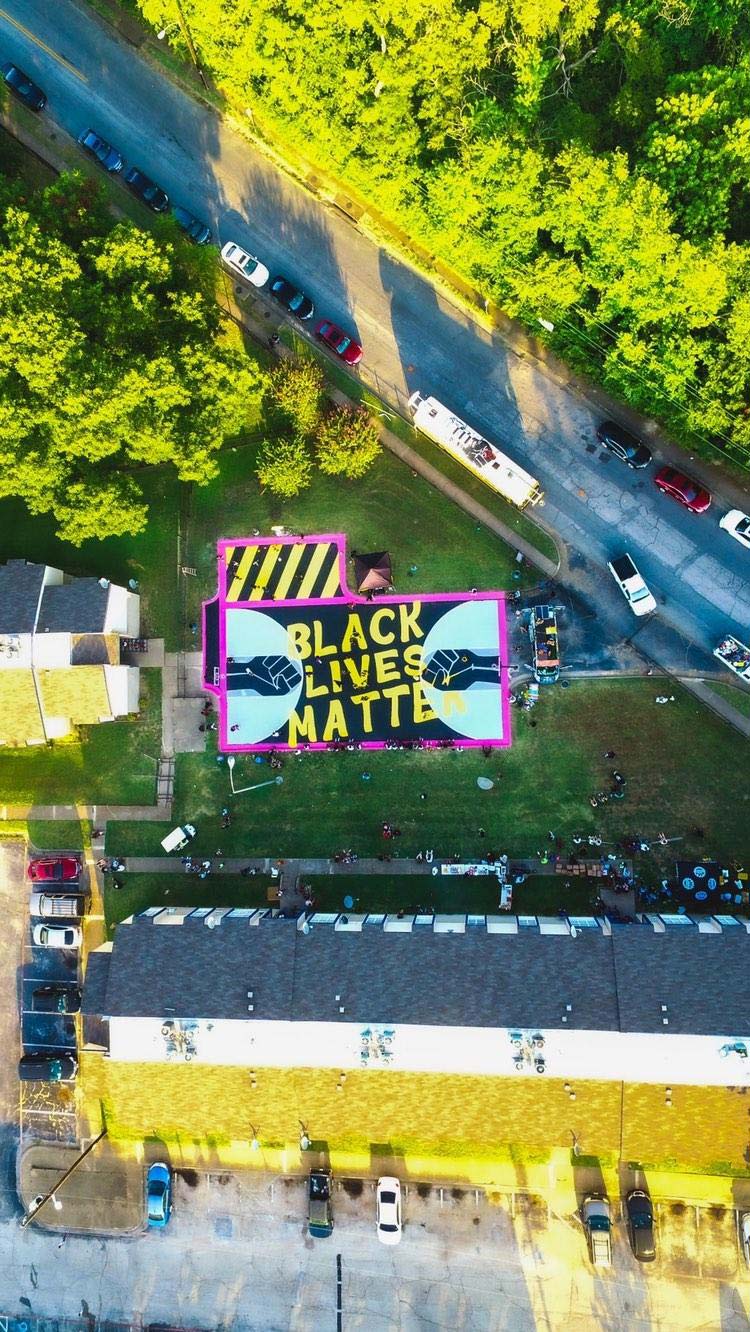 Brian Webb, who met Ansom on the basketball courts in the Watts neighborhood of Los Angeles, recently moved to Dallas with his family to work with a private school that was expanding from California. But when he landed in Texas, the Covid-19 pandemic put the school expansion plans on hold and Webb out of a job. He eventually found work as a maintenance supervisor for a set of apartment complexes in Highland Hills, where an outdoor basketball court had fallen into disrepair.

“I reached out to Nick and said, ‘Hey, I’ve got this court here; you all could stop in Dallas,'” Webb says. “He said they didn’t have the budget for it, but that they were interested. So I told him, ‘We have the people, and if you come, we can make it happen.’”

And so they did. Dallas was added to the schedule, and when the Hoop Bus rolled into town, dozens showed up throughout its week-long efforts of renovating of the basketball court, which included resurfacing, replacing the hoops and repainting the court with a mural dedicated to the Black Lives Matter movement.

“We had a lot of work to do [on the court],” Ansom says. “We didn’t have any funds — but we had some leftover paint, and an artist who would do the mural, so we found a way.”

The route the Hoop Bus has planned from California to Washington, D.C., was planned in part around the locations of American Natural Gas stations, a clean fuel company that sponsored the trip by providing natural gas for the Hoop Bus to run on. Routing the trip through the South was intentional, according to Ansom.

“We could have taken the easy route,” he says, “but we chose to go against the grain — areas with high Covid-19 numbers and high heat.” 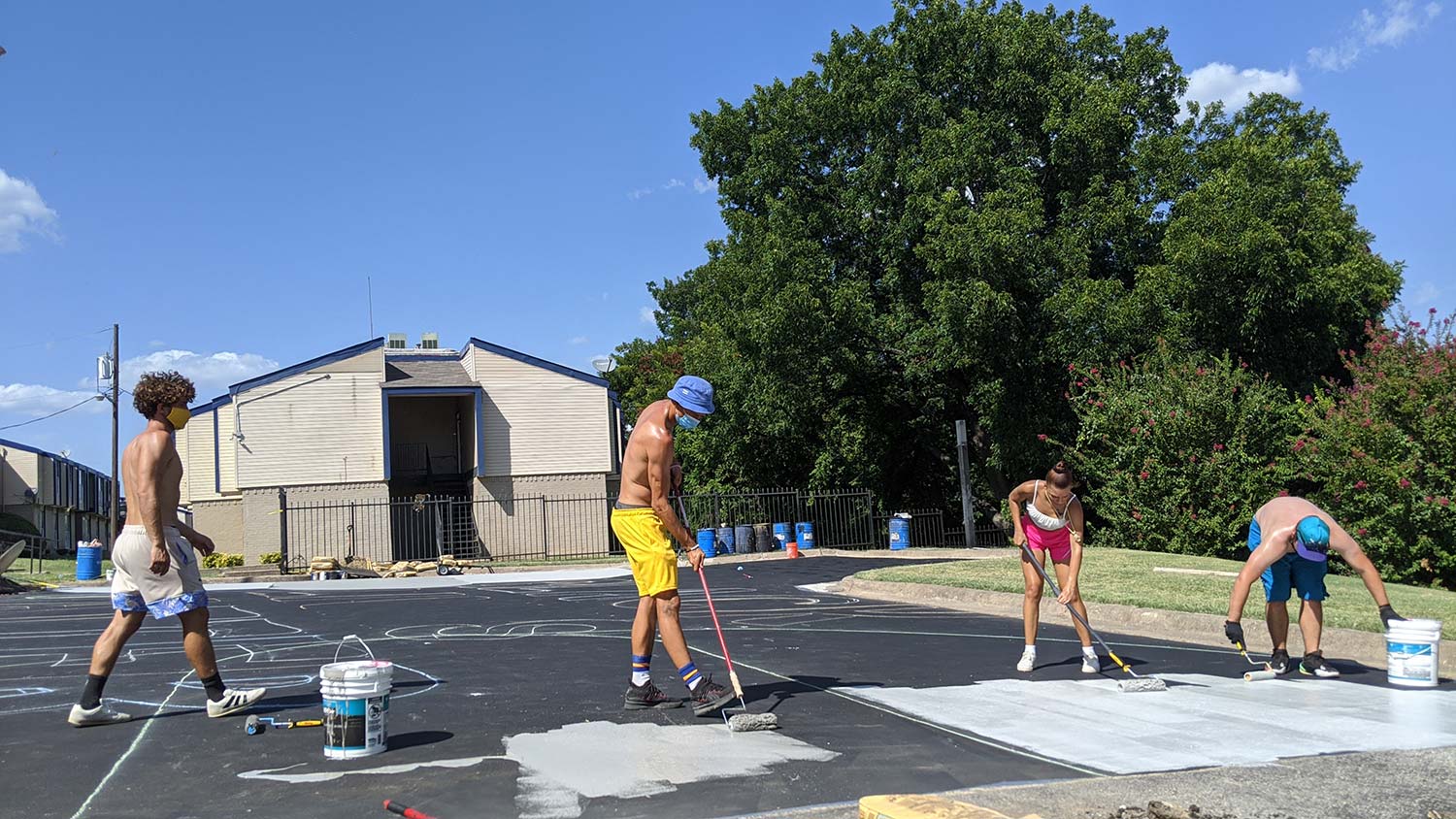 In some ways, their route is also a nod to previous, traveling civil rights efforts, such as those of the Freedom Riders. Ryan Jones, one of team members who manages the Hoop Bus Instagram, notes one major similarity: “The South is where we thought we were needed the most.”

Indeed, the Hoop Bus showed up where it was needed on Wednesday, August 12.

That’s when the Hoop Bus and R-Beats Van joined a protest organized by We Take The Streets, a Dallas-based group that has been protesting against police brutality for over 70 days straight.

“Basketball is the way we show our love.” says Jones.

A local protest group in Dallas has deployed a school bus pic.twitter.com/knjEY0SLFV

In a show of solidarity, several members of the We Take The Streets later showed up to support the renovation effort and subsequent celebration on Friday.

Everywhere it travels, it seems people want to play along with the Hoop Bus: After departing California with only 10 members, the Hoop Bus now boasts over 30 members in its caravan. When it reaches its destination in Washington D.C. to link up with other like-minded efforts, the Hoop Bus will likely be balling alongside thousands.

“These people hitting the streets are heroes,” Ansom says. “The police are arresting people for no reason. And so we want to show our support to this peaceful movement with the Hoop Bus.”

All photos by Steven Montacelli unless otherwise noted.