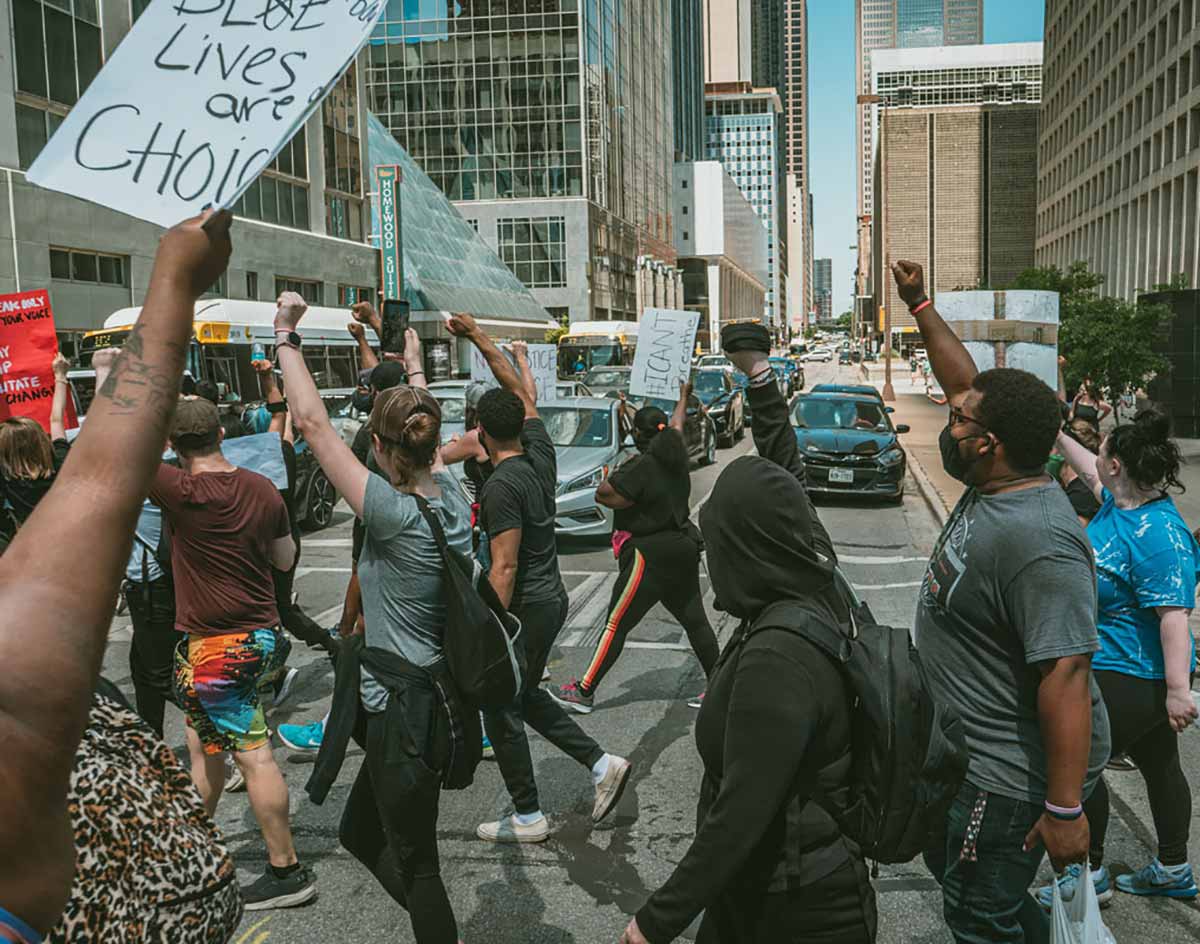 Breaking Down The 11 Most Effective Catchphrases Chanted By Marchers Over The Last Few Months Of Protests In And Around Dallas.

For 68 days now, Dallasites have continuously taken to the streets to protest police brutality (and other societal ills), with seemingly each day bringing with it a new chant.

That’s purposeful, for sure. So, too, is the process of weeding out the bad chants in favor of the most effective ones.

Don’t sell this aspect of activism short! Few people realize just how important good chant selection is to the demonstration process. It’s not just that these efforts have to clearly spout your intended message; they also have to slap — because, if they don’t, they just won’t catch on.

That’s something we’ve learned firsthand in covering as many of these protests as possible here in the Triple D over the course of the summer.

Here, we’ll dive into the 11 most effective chants we’ve heard throughout our coverage efforts. Why 11? Well, we’ve explained that before.

It’s long been commonplace at this point for protests to highlight the victims of police brutality in their chants, specifically through the use of the “say his/her name” model. Always visceral and somber remembrances, these sayings directly remember the prominent victims of the root issue that’s being called out. Sometimes, though, this format can prove overwhelming, as evidenced by this chant’s close cousins, “Say their names! Which ones?” and “How many? Too many!”, which are both build around the notion that the number of victims has become so voluminous that it’s impossible to remember each and every name associated with these tragedies.

“All lives can’t matter till what? Black Lives Matter!”

While “Black Lives Matter” in and of itself has become a standalone rallying cry for this summer of protests — and, frankly, many similar protests across the country for the better part of a decade now — this particular chant also serves as a proper response to the “All Lives Matter” reply that those against the movement are all-too-quick to volley in return. This one gets right to the core of the counterargument, and dismantles its ignorant and faulty logic from the start.

“ACAB” is a acronym that’s been widely used among leftist groups for years — and you can even choose your own adventure in determining whether it stands for “All Cops Are Bastards” or “All Cops Are Bad.” It boils down to this: If you think policing in general is fundamentally unjust, and that law enforcement policies have placed U.S. citizens in direct danger, then you also believe that anyone who participates in the system is inherently unjust, too. It’s not far off from the “There is no such thing as a good Nazi” argument. Naturally, in this instance, it’s followed by a call to abolish the police entirely.

There’s little argument that buzzword of these 2020 police brutality protests has been “defund” — and with plenty of confusion in, around and on top of it. Considering how frequently other public organizations are defunded, though, that confusion is at least a little curious. To that end, this chant doesn’t bother itself much with explanations it doesn’t feel it needs to make. After all, there’s not much debate to be had over just how much police departments dominate the city budgets that fund them — as is certainly the case here in Dallas. This chant’s goal is to have these bloated police budgets — at least in part — reallocated to other programs that attack the root causes of crime, such as homelessness prevention, education and housing initiatives. The idea is that we can help to further make our city and place of living safer without having to militarize our law enforcement officers.

“No justice, no peace! Fuck these racist-ass police!”

All summer long, there have been misconceptions over just how “peaceful” these protest have been. In the context of this chant, it refers to the fact that protesters will continue to disrupt and annoy everyday life in the city until their demands are met. It isn’t meant as a threat of violence; blocking off traffic or gathering a mass of bodies at an important infrastructure point are not inherently violent acts. The justice being sought here mostly refers to the indictment and sentencing of cops who have so wrongly acted upon the citizenry. As for the last part? Well, we think that speaks for itself.

A close cousin of “Whose streets? Our streets!” and “If we don’t get it? Shut it down!” this chant is often used to reference protester attempts at seizing infrastructure by blocking roads while marching or blocking intersections at key points. It’s also a warning of sorts to march participants and non-participants alike of efforts to disrupt the free flow of movement in order to make these demonstrations’ voices heard. Lastly, these chants acknowledge the power that citizens have over their governments, while reminding Dallasites at large that the city belongs to everyone, and is not split on neighborhood lines.

The etymology of “Fuck 12” — just another way of saying “Fuck the police,” really — is widely disputed. Is it a reference to the last two letters in the aforementioned “ACAB” acronym, which can be translated numerically as “1312,” or is it a reference to the 1970s cop show Adam-12? Where it started from doesn’t really matter. In recent years, the phrase has been used in popular rap songs from such luminaries as Migos, YG and RMR, just to name a few. Specifically, though, this chant seems to owe its beginnings to the lyrics of Vic Mensa’s “16 Shots” protest track, which uses this same phrasing verbatim as its hook. Generally, one chant leader will count off the first 11 numbers, then leave the group to shout the last part en masse.

This one, a modern update on a classic chant, is just a simple call to action: Remove racist cops, and racist policies, from policing ranks.

Sometimes, all a good chant needs is a solid rhyme — and this one, popular since President Donald Trump started the campaign for his eventual 2016 election, is built around that. But it’s also more than just a cutesy rhyme: It’s an indictment on the intertwined nature of the oppressive forces of our country, as well as a call for the removal of all of those who continue to perpetuate these forces’ presence — starting with POTUS on down to the Ku Klux Klan. Think of this one as an extension of Zack de la Rocha’s classic Rage Against The Machine lyric: “Some of those that work forces / Are the same that burn crosses.”

For the last decade or so, “This is what democracy looks like!” and “Show me what democracy looks like!” have been among the more popular protests chants around. And, well, rightly so: By chanting these words, protesters are reinforcing their constitutionally afforded freedoms of speech, assembly and petition. While those chants remain to this day, they’ve also spurred a sibling of sorts this summer. Chanting “This is what community looks like!” is a deliberate expression on the part of protesters to show that their efforts are inclusive rather than exclusive. Furthermore, it’s an invitation people to join on in these efforts of supporting their neighbors’ rights and safeties.

For any number of reasons — not the least of which has been her inability to publicly confirm her officers’ use of tear gas on protesters on the Margaret Hunt Hill Bridge on Monday, June 1, despite internal Dallas Police Department documents we obtained that do openly acknowledge said use — Dallas Police Department Chief Renee Hall has fallen under major public scrutiny, with calls for her firing being a near-constant among protests. While this particular chant was most prominent (and understandably so) in the immediate wake of the bridge incident in which DPD kettled and then arrested 674 protesters in one fell swoop, this chant has continued to pop up from time to time throughout the summer. But what’s perhaps most interesting about it is its specificity: Whereas most chants call for broad reforms, this is the sole chant we’ve heard in Dallas that calls out a city official by name.