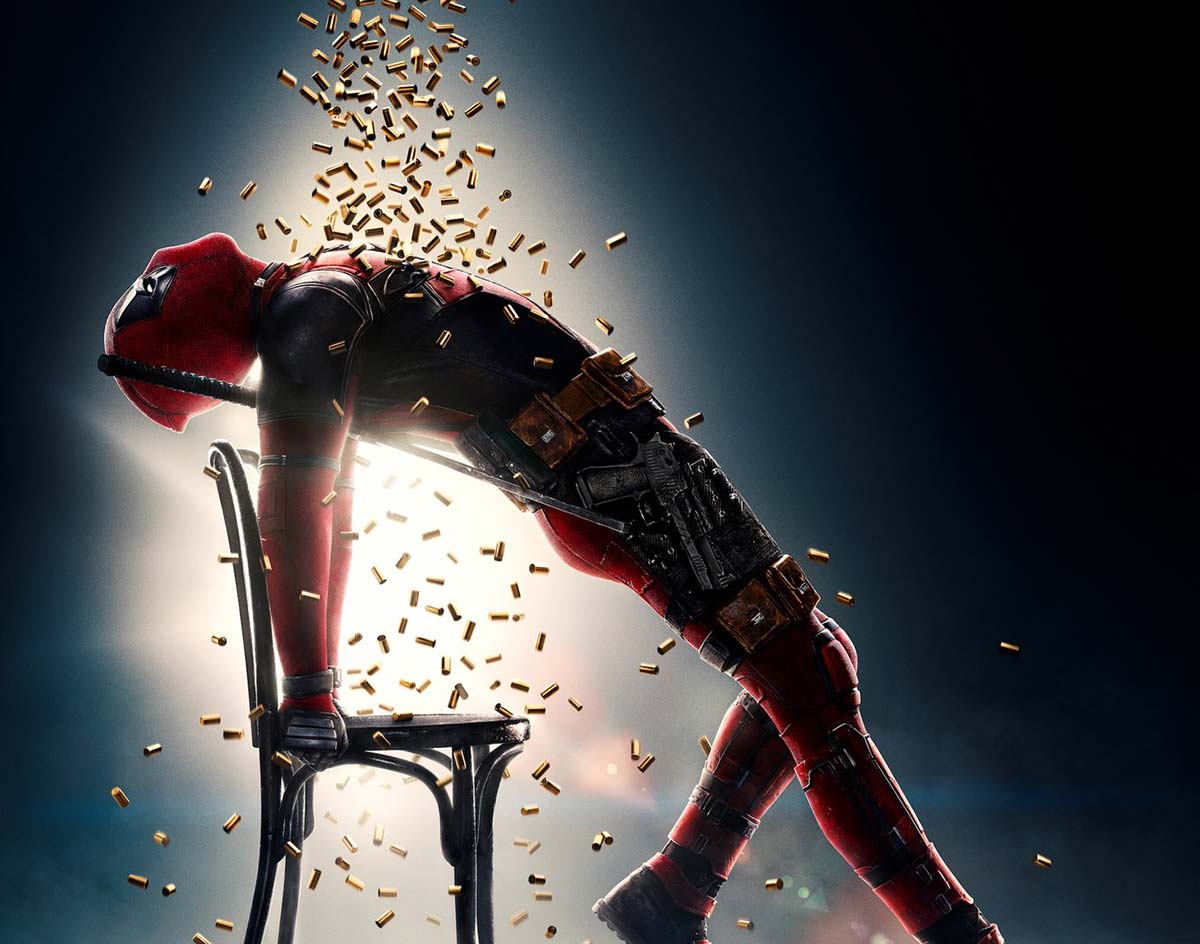 On Deadpool 2, Solo: A Star Wars Story, Life Of The Party And The Rest Of May 2018’s New Releases, Limited Showings and Repertory Screenings Around Dallas.

Infinity War‘s late move up to become an April release means this May is not quite as overstuffed as it normally is.

Of course, that’s not to say it’s filled with crap. While the month’s many comedies and smaller thrillers might now be able to stand a chance against the mighty Thanos, it does boast some fine box office firepower all its own in the form of two wise-cracking heroes known as Deadpool and Han Solo.

Still, if you’re already seeking a break from universe destruction and time travel, youve got some other intriguing options this month, including mid-life crises with Charlize Theron and Melissa McCarthy, searing dramas with Ethan Hawke and our eras top Rachels (McAdams and Weisz), plus multiple opportunities for you to sit in the theater for a long time and enjoying the air conditioning as the temperature outside starts to heat up.

Tully.
Director: Jason Reitman.
Writer: Diablo Cody.
Cast: Charlize Theron, Mackenzie Davis, Mark Duplass, Ron Livingston.
Opens: Friday, May 4.
Together, Diablo Cody and Jason Reitman have made two of my favorite movies: Juno and Young Adult. Apart, well, their track record is a lot spottier. So I’m excited for them to reunite for this dramedy about the highs and lows of motherhood. I’m not a parent, but I expect they’ll find plenty of universal truths about being appreciated by your loved ones. Charlize Theron won an Oscar 15 years ago, but she’s proved in recent years that she really is one of our best working actresses.

Life of the Party.
Director: Ben Falcone.
Writers: Ben Falcone, Melissa McCarthy.
Cast: Melissa McCarthy, Debby Ryan, Gillian Jacobs, Maya Rudolph.
Opens: Friday, May 11.
Melissa McCarthy has continued to find solid roles for herself that show her comedic and dramatic chops. In her first movie since 2016’s Ghostbusters reboot, she plays the mom of Jennifer, who enrolls in college alongside her to finish the degree she put on hold when she got pregnant. Since McCarthy co-wrote this film with her husband Ben Falcone, that means there will plenty of sweetness. The humor will come from this fish-out-of-water scenario, not the “Look at this plus-size woman trying to compete with 20-something babes” scenario.

Deadpool 2.
Director: David Leitch.
Writers: Rhett Reese, Paul Wernick.
Cast: Ryan Reynolds, Josh Brolin, Zazie Beetz, Julian Dennison.
Opens: Friday, May 18.
Deadpool was one of the biggest surprises of 2016: a modestly budgeted film featuring a not-super-popular antihero. But then it had the biggest debut ever for an R-rated film and kicked off possibilities for adults-only comic book movies that so far only Fox has explored. In this sequel, there’s a bigger budget, an Oscar-nominated actor playing the villain and a new team to put together. But really, we know we’re all here for the foul-mouthed jokes. It’s just a shame they couldn’t have shattered the fourth wall to recast well-known asshole T.J. Miller.

Solo: A Star Wars Story.
Director: Ron Howard.
Writers: Jonathan Kasdan, Lawrence Kasdan.
Cast: Alden Ehrenreich, Donald Glover, Woody Harrelson, Emilia Clarke.
Opens: Friday, May 25.
I’m choosing to believe that rumors of its demise have been greatly exaggerated. While I would have loved to have seen what Phil Lord and Chris Miller would have done with this quip-heavy origin story, people acting like Ron Howard is some nobody need to do their homework. Even if Ehrenreich isn’t up to the challenge of playing the role that launched Harrison Ford into superstardom, we’ve still got Donald Glover looking dope in a fur coat and Woody Harrelson as the grizzled leader of their band of thieves. I’m still in.

Beast.
Director: Michael Pearce.
Writer: Michael Pearce.
Cast: Jessie Buckley, Johnny Flynn, Geraldine James, Trystan Gravelle.
This British import has hit a ton of festivals and been characterized as one of the year’s most intense movies. Jessie Buckley makes her feature debut as Moll, who lives under the thumb of her oppressive mother (Geraldine James), but pulls away when she meets Pascal (Johnny Flynn), who might be involved in a string of grisly murders.

First Reformed.
Director: Paul Schrader.
Writer: Paul Schrader.
Cast: Ethan Hawke, Amanda Seyfried, Cedric Kyles, Michael Gaston.
Alternate title: How Paul Schrader Got His Groove Back. The writer-director has had a rough last decade, but he’s been getting raves for his latest film. Ethan Hawke stars as a pastor having a crisis of faith. His son has been killed in Iraq, and now a parishioner (Amanda Seyfried) has let him know her husband might be a terrorist. I’ve been excited about this one for a long time.

On Chesil Beach.
Director: Dominic Cooke.
Writer: Ian McEwan.
Cast: Saoirse Ronan, Billy Howle, Emily Watson, Samuel West.
The first of three films this year starring the great Saoirse Ronan (Lady Bird), this is her second Ian McEwan adaptation after 2007’s Atonement. Here, she’s Florence, recently married to Edward (Billy Howle), but feeling a flurry of emotions that keeps her from experiencing true intimacy. It’s going to be difficult to translate the internal struggle of Florence’s character onto the screen, but if any actress is up to the challenge, it’s Ronan.

Grease Sing-a-Long.
Director: Randall Kleiser.
Writer: Bronté Woodard.
Cast: John Travolta, Olivia Newton-John, Stockard Channing, Jeff Conaway.
Playing At: Inwood Theatre.
Showing: Friday, May 4; Saturday, May 5.
Until last year’s unnecessary live-action Beauty and the Beast, Grease was the highest-grossing musical ever. In 2018, it is, as the kids say, problematic. There’s a pregnancy scare, date rape and a shocking amount of sexual harassment. It also has the oldest cast of teenagers ever, exemplified by 32-year-old Michael Tucci playing Sonny. (Although Stockard Channing was actually the oldest of the core cast members, she also gave the best performance.) But even with all its flaws, it’s hard not to get energized by that incredible score, and the supernova wattage of charisma from John Travolta and Olivia Newton-John.

Giant.
Director: George Stevens.
Writers: Fred Guiol, Ivan Moffat.
Cast: Elizabeth Taylor, Rock Hudson, James Dean, Carroll Baker.
Playing At: Texas Theatre.
Showing: Sunday, May 20.
This 1956 movie is almost as big as the state of Texas itself. At three-plus hours, it’s epic in scope, even though it only won one of its nine Oscar nominations (for Best Director). One of James Dean’s three films, it’s a strong acting showcase for him, Rock Hudson and Elizabeth Taylor, who weren’t quite icons yet. This is a big, sprawling, melodramatic film, but one that demands to be seen on a giant screen.

The Last Emperor.
Director: Bernardo Bertolucci.
Writers: Bernardo Bertolucci, Mark Peploe.
Cast: John Lone, Joan Chen, Peter O’Toole, Victor Wong.
Playing At: Tuesday, May 22.
Showing: The Magnolia.
Despite winning nine Oscars, this is an almost forgotten film of the 1980s. Bernardo Bertolucci might be a bad dude in real life, but his sweeping epic of the last man to rule China until the Communists took over is one of the most beautiful films you’ll probably ever see. John Lone and Joan Chen never got as big an English-speaking roles in film again, though both did co-star in big-budget flops like The Shadow and Judge Dredd, respectively. But honestly, any chance you have to see a Best Picture winner on the big screen is worth it.