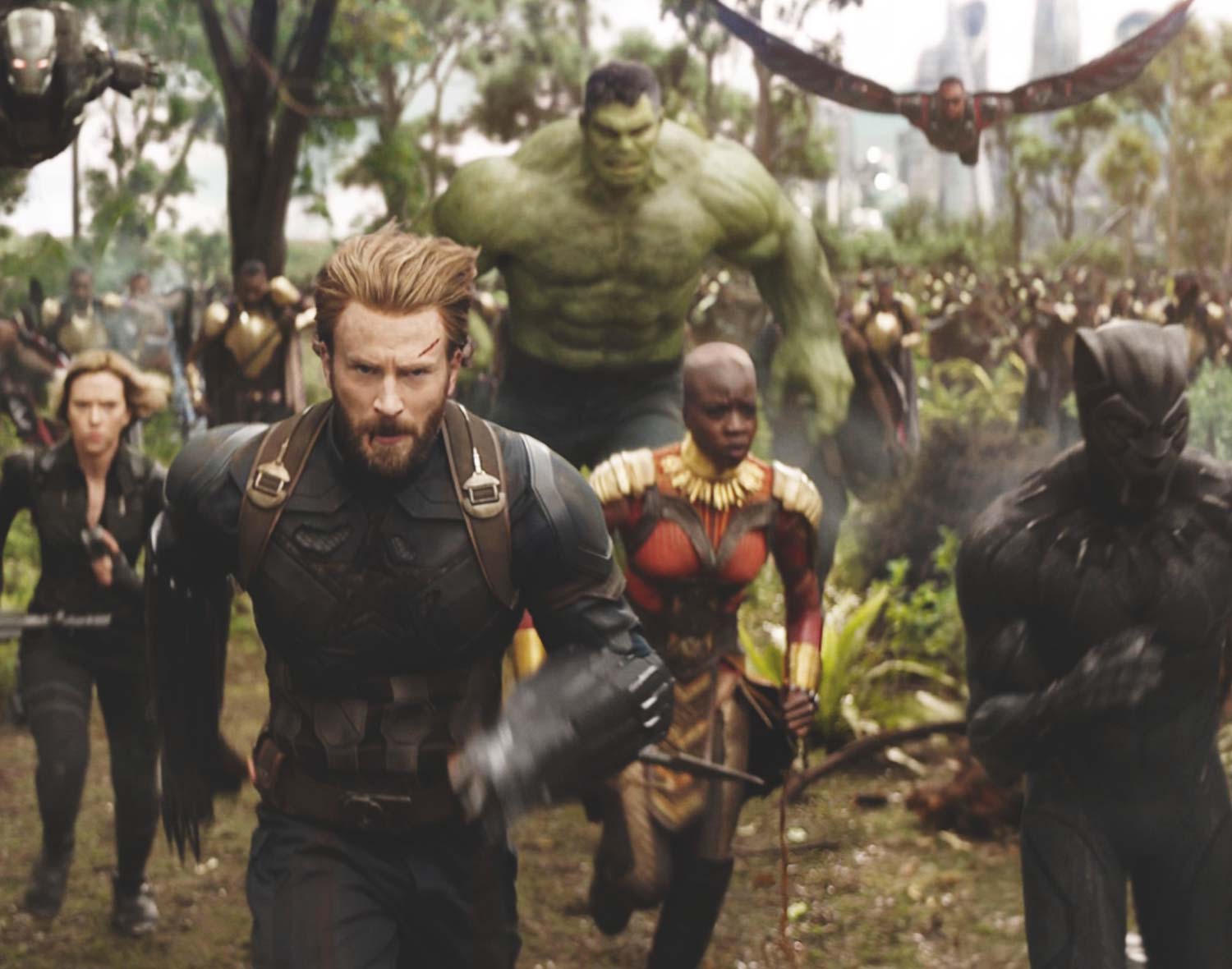 On Avengers: Infinity War, Chappaquiddick, Blockers And The Rest Of April’s New Releases, Limited Showings and Repertory Screenings Around Dallas.

Things have been headed in this direction for years, with the summer movie season creeping up and starting earlier and earlier each spring. But, just this week, the folks at Marvel threw down the gauntlet and announced that they’re moving up the release of their massive Avengers: Infinity War blockbuster a week and dropping it on April 27.

That’s good news if you’ve been stoked for that one, no doubt. But there’s still plenty to keep you entertained in movie theaters in the couple of weeks that remain until then. There are neat-looking comedy and a horror movies from newbie directors that got great reviews at SXSW, a based-on-real-events drama about an event that’s often overlooked in our nation’s history and a bunch of super sad movies, some of which are offsetting all that somber stuff with huge action scenes.

Oh, and as for this month’s repertory screenings? Well, there’s no crying in baseball, but there are devastating reunions, true stories and the only movie David Byrne ever directed.

Blockers.
Director: Kay Cannon.
Writers: Brian Kehoe, Jim Kehoe.
Cast: John Cena, Leslie Mann, Ike Barinholtz, Colton Dunn.
Opens: Friday, April 6.
Despite loving this cast, I was extremely hesitant about this movie based on its trailer. It just seemed gross. Granted, I’m not a parent, but it seems to me that if your high school senior is consenting with her age-appropriate partner and using protection, you should probably just butt out of her sex life. Then my stance flipped. When Blockers premiered at SXSW, the reviews were almost unanimously strong — and among critics I trust, no less. Since then, my fears for this sex comedy have been alleviated a lot, even though I hope the movie has something more hilarious in mind than John Cena butt-chugging a 40.

Chappaquiddick.
Director: John Curran.
Writers: Taylor Allen, Andrew Logan.
Cast: Jason Clarke, Kate Mara, Ed Helms, Bruce Dern.
Opens: Friday, April 6.
Though it’s got the potential to be another average biopic, this exploration of the lesser-explored Kennedy scandal at Chappaquiddick has promise. The name refers to where Senator Ted Kennedy (Jason Clarke) had a car accident that left a younger woman (Kate Mara) dead — a fact that he didn’t report until the next day. The film explores that night and the aftermath, as well as the gray areas in between the facts. It also gives two comedians (Ed Helms and Jim Gaffigan) a chance to show off their dramatic chops.

A Quiet Place.
Director: John Krasinski.
Writers: Bryan Woods, Scott Beck, John Krasinski.
Cast: John Krasinski, Emily Blunt, Noah Jupe, Millicent Simmonds.
Opens: Friday, April 6.
I was certainly not expecting John Krasinski, the recently swole star of The Office and that Benghazi movie, to direct a widely acclaimed horror film. In A Quiet Place, much of which has no audible dialogue, he and his real-life wife Emily Blunt play parents trying to survive with their kids in a post-apocalyptic hellscape, where they have to remain as quiet as possible, lest whatever creatures that roam the earth come to tear them apart. Our own Javier Fuentes really dug it.

Avengers: Infinity War.
Directors: Anthony Russo, Joe Russo.
Writers: Christopher Markus, Stephen McFeely.
Cast: Chris Evans, Chris Pratt, Chris Hemsworth, Josh Brolin.
Opens: Friday, April 27.
There’s going to be way too many characters fighting for screentime here, but this is what the entire Marvel Cinematic Universe has been building to. Iron Man’s there, alongside Spider-Man. Three of the four Chrises will combine forces to take down Thanos (Josh Brolin). But, most crucially, we’re getting more Black Panther just a few months after everyone – understandably – lost their minds. There’s a lot of ways this can go wrong, but unlike the DC Universe, Marvel actually knows what it’s doing.

Beirut.
Director: Brad Anderson.
Writer: Tony Gilroy.
Cast: Jon Hamm, Rosamund Pike, Shea Whigham, Dean Norris.
Jon Hamm might never be a film star the way he lit up TV screens on Mad Men. But with Baby Driver and this, it seems like he might be finding his groove. Here, he’s a depressed negotiator called in to broker a deal between a terrorist group who’s kidnapped a CIA operative and the U.S. and Israeli intelligence agencies who aren’t necessarily interested in trading anything for him. The trailer unfortunately shows almost all Arabs in a negative light, but hopefully the script from Tony Gilroy (Michael Clayton, the Bourne trilogy) will offer some complexity.

Lean on Pete.
Director: Andrew Haigh.
Writer: Andrew Haigh.
Cast: Charlie Plummer, Chloe Sevigny, Steve Buscemi, Steve Zahn.
In other hands, this boy-and-his-horse movie would be a sappy Disney spectacle. But in the hands of British director Andrew Haigh (45 Years), this is bound to be a moving but ultimately devastating story. Charlie (Charlie Plummer) plays the wayward teen who develops a close relationship with a past-its-prime racehorse. When he learns that Pete’s owner (Steve Buscemi) plans on selling, the two take off on a journey that’s bound to end in heartbreak.

The Rider.
Director: Chloé Zhao.
Writer: Chloé Zhao.
Cast: Brady Jandreau, Tim Landreau, Lilly Jandreau, Cat Clifford.
Speaking about sad movies about young men and horses, The Rider was one of the surprise nominees for Best Feature at this year’s Independent Spirit Awards. Written and directed by Chloé Zhao, the film features a cast of non-actors, who all have experience in ranching and the rodeo. Brady Jandreau plays Brady, who’s recovering from getting thrown from a bull when he meets Apollo, a horse he shares an immediate connection with. Even though he knows his mind and body aren’t in great shape, he can’t help but be drawn to get back on the horse and continue his dreams.

You Were Never Really Here.
Director: Lynne Ramsay.
Writer: Lynne Ramsay.
Cast: Joaquin Phoenix, Judith Roberts, John Doman, Alex Manette.
Writer-director Lynne Ramsay zigs once again, this time trying her hand at an action thriller. Joaquin Phoenix won Best Actor at Cannes for this film, in which he goes all John Wick on some sex traffickers. It looks like there’s also some conspiracy nonsense, but I’m here for the extremely stylish violence that’s sure to be handled much better than that Death Wish remake.

A League of Their Own.
Director: Penny Marshall.
Writers: Lowell Ganz, Babaloo Mandel.
Cast: Tom Hanks, Geena Davis, Lori Petty, Rosie O’Donnell.
Playing At: Inwood Theatre.
Showing: Friday, April 6; Saturday, April 7.
It’s baseball season again, and while the Rangers got their asses kicked by the defending World Series champs in their first run of games, it’s always good to have them back. Though it’s fondly remembered, A League of Their Own often isn’t brought up in the list of best baseball movies, but it absolutely deserves to be up there with The Natural, The Sandlot and more. Tom Hanks coaches an all-lady baseball team while the men are off fighting in World War II, hoping to raise the spirits of the folks at home, and maybe win a game or two. The ensemble is solid and the script – by comedy giants Lowell Ganz and Babaloo Mandel – still cracks.

All the President’s Men.
Director: Alan J. Pakula.
Writer: William Goldman.
Cast: Robert Redford, Dustin Hoffman, Jason Robards, Hal Holbrook.
Playing At: The Magnolia.
Showing: Tuesday, April 10.
While I certainly dug The Post and Spotlight, they don’t hold a candle to All the President’s Men, which recounts the reporting efforts of Bob Woodward and Carl Bernstein, as they investigate the Watergate Hotel break-in and ensuing scandal, but makes it one of the most thrilling, entertaining films of the ’70s. Of course, if you want to read into any modern-day relevance about corrupt presidential administrations, that’s on you.

True Stories.
Director: David Byrne.
Writers: Stephen Tobolowsky, Beth Henley, David Byrne.
Cast: David Byrne, John Goodman, Spalding Gray, Swoosie Kurtz.
Playing At: Alamo Drafthouse Richardson.
Showing: Saturday, April 14.
Filmed in North Texas, it’s still kind of amazing that a major studio funded a project as bizarre as David Byrne’s one and only directorial feature. A serious of loose vignettes about a small Texas town and its residents and visitors, it’s got plenty of oddball characters, yet it’s sweet-natured and not condescending, even though Byrne isn’t a Texan. It’s got an excellent John Goodman performance and a stellar soundtrack.

Mysterious Skin.
Director: Gregg Araki.
Writer: Gregg Araki.
Cast: Joseph Gordon-Levitt, Brady Corbet, Elisabeth Shue, Michelle Trachtenberg.
Playing At: Texas Theatre.
Showing: Friday, April 27.
Just a heads up: You will definitely have a bad time watching Mysterious Skin. It’s one of the most devastating movies I’ve ever seen. But if you stick it out, you’ll be richly rewarded with great performances from Brady Corbet and Elisabeth Shue, but most especially from Joseph Gordon-Levitt, never better, as a teen hustler “with a black hole where his heart should be,” as his best friend (Michelle Trachtenberg) describes him. It’s a tough sit, but it’s truly unforgettable. JGL and Corbet play two teens who share a traumatic event from their childhood that set them down on their tragic paths.