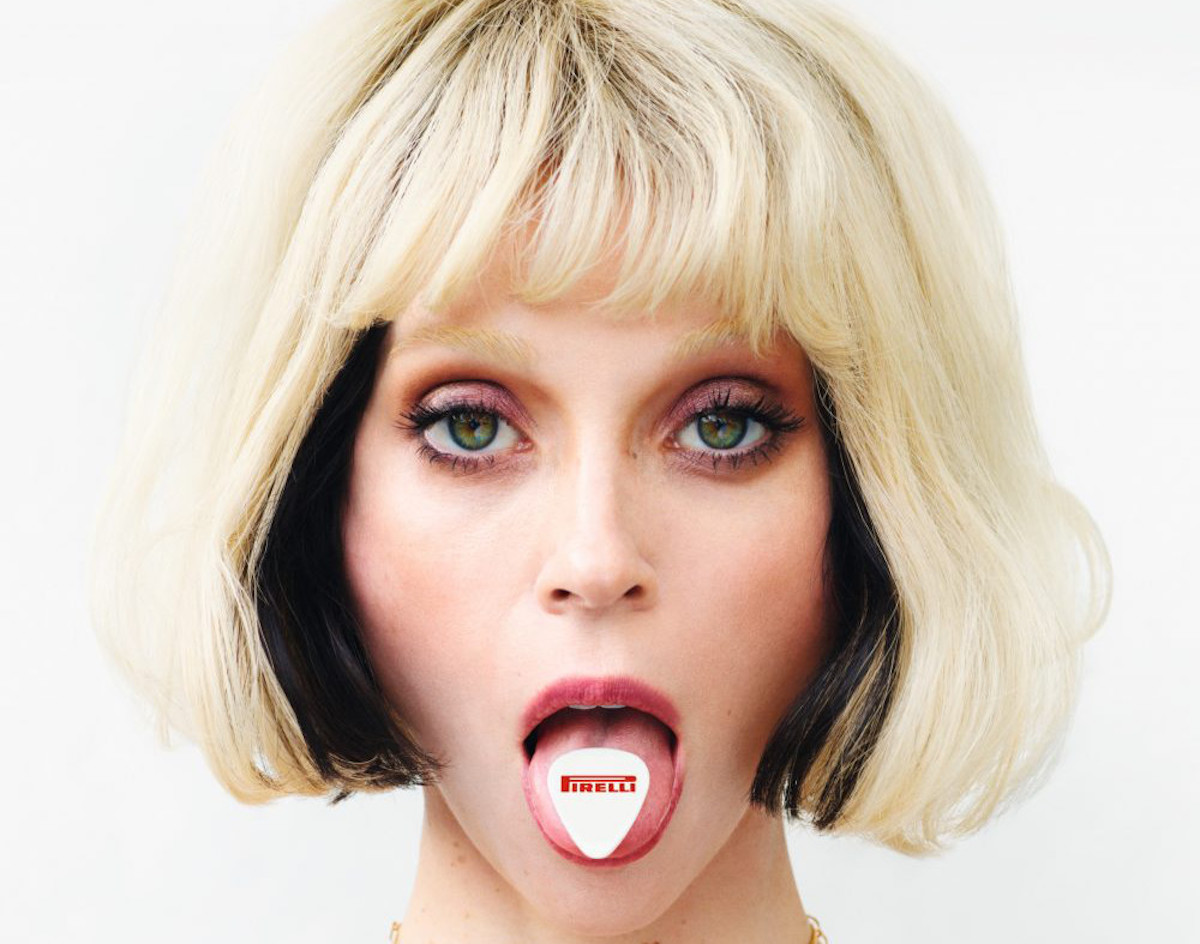 On Monday, Pirelli released the 2022 edition of its famous calendar starring some of “the greatest talents in the world of music” photographed by Canadian singer-songwriter Bryan Adams. Titled “On the Road,” the calendar was inspired by Adam’s life as a touring musician – the 45 years on the road, traveling, staying in hotels and the hours spent backstage.

Iggy Pop, Cher, Jennifer Hudson, Grimes, Normani, Kali Uchis, Saweetie, Rita Ora and, our very own, St. Vincent are the stars found inside its pages. Images like Cher posed in a dressing room, Saweetie pushing a luggage cart at Capri Hotel and stilettos and Ora inside a bathtub wearing a shimmering, silver dress representing the scenes of the day of the show. Of course, this is a glamourous of tour life: room service, silver cloches and healthy eating.

St. Vincent, the Dallas-raised acclaimed musician, is sported on the cover of the calendar’s 48th edition sticking out her guitar-picked tongue and in her Daddy’s Home blonde bob. Pirelli, the Italian tire company, has released a calendar each year since 1964 until 2020 when it was put on hold due to the COVID-19 pandemic.

For its return, it just makes sense to put a lovely Dallasite face on its cover? <3

Neon Indian was featured on an episode of Dr. Martens mini documentary series, Latinx Indie – LA. Directed by Ambar Navarro, the series explores “cultural cross-pollination rooted in Chicano spirit and style that’s brought long-deserved spotlight to artists of the sub-genre.” Latinx indie acts, such as Doris Munoz, Inner Wave and Harmless share how Hispanic music influences their music careers and their identity. Alan Palomo, the Mexican-American artist behind the electronic band from Denton, describes how his background and musical styles outside of his culture helped him slowly shape who he is.

“I like being in two places because they give each other context,” he says. “I can see Mexico from one perspective, I can see America from a different perspective. I think it informs a lot of my musical decisions.”

His music video to his first Spanish track “Toyota Man” – a song about an immigrant’s journey from Monterrey, Mexico to Austin – was featured in the episode. Watch it down below!

This week, we have a few more features we must share with you. Look, we never plan these things. The news just works in our favor sometimes. Since many of you may still be recovering from the holiday weekend and another Dallas Cowboys flop (we are too, trust us.), we thought it would be nice to go down memory lane for a second. This year, country singer Luke Combs headlines the Thanksgiving Day Halftime Show at the Cowboys vs, Las Vegas Raiders game at the AT&T Stadium, but you remember the rock band that headlined exactly 20 years ago?

Ahem. It was Creed.

Back in 2001, Cowboys played against the Denver Broncos (they lost then too, too. Go figure.) and was gifted with Creed’s 7-minute medley of “Higher,” “My Sacrifice” and “Don’t Stop Dancing.” This year also marks the 25th anniversary of these Thanksgiving halftime shows. If only there were some sort of list of past performances …

After more than 20 years, the Dallas honky-tonk band Eleven Hundred Springs announced it would disband last summer but would play shows for the remainder of the year. Well, folks, that day arrived last week when the band played its final show on November 26 at Granada Theater. Eleven Hundred Springs was formed by frontman and guitarist Matt Hillyer, bassist Steven Berg and drummer Richie Vasquez in the late 90s with music that spread across the Texas country scene. Even through frequent lineup changes, the band remained solid until last year when the pandemic took a toll on its career. In January 2020, Eleven Hundred Springs released Here ‘Tis and had planned a tour before COVID-19 hit.

It’s still hard to grasp the fact that we are still in an on-going pandemic. Most of society has gone back to normal, but we are still reminded of this scary situation from closures and losses through all part of our community. One of the things we’re glad to see come back this year were all our favorite music festivals – especially those in DFW.

This month, Ubbi Dubbi Festival, the electronic dance festival in Ennis, announced the lineup and dates. The festival will take place April 23 and 24 – with a camping pre-party April 22 with Blunts & Blondes — at Texas Metroplex. Alison Wonderland, AU5 X Chime, Black Tiger Sex Machine, Blanke and Blue Clair are just few of the acts performing at the 2-day event. This year, Ubbi Dubbi — which coined itself the “the #FirstFestBack” — drew about 60,000 EDM fans when it returned to DFW after its 2020 cancellation.

Now to our features of the week! Here are some tracks, and covers, from the past month you must listen to in case you missed them.

Kacey Musgraves covered Coldplay‘s “Fix You” for Chipotle’s stop-motions animation film “A Future Begins.” This campaign was created to support Chipotle’s initiative to help transition 1 million acres of land to famers. This cover is considered the sequel to Willie Nelson‘s cover of  Coldplay’s “The Scientist.”

Also, here’s her talking about why she chose to support the campaign.

Speaking of Coldplay, we must mention Selena Gomez’s feature on Coldplay latest album Music of the Spheres.

Dave Grohl and Foo Fighters producer Greg Kurstin releases another “The Hanukkah Session” this year with covers to celebrate Jewish musicians. To start off, the two recorded a metal version of Lisa Loeb’s “Stay (I Missed You).”

And Kelly Clarkson? Covering the Pixies? Here for it.