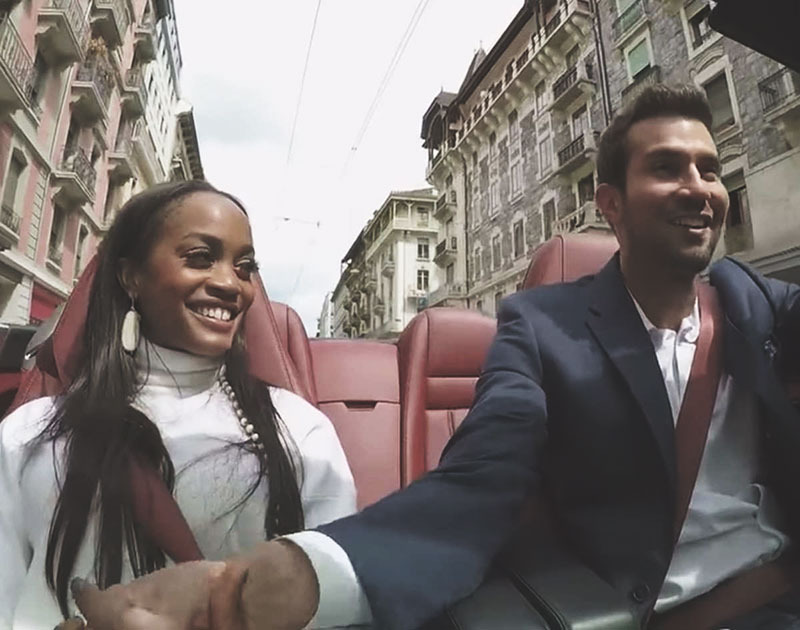 This Week On The Bachelorette, All Signs Pointed To Rachel Already Having Decided Who’s Going To Win Her Hand At The Final Rose Ceremony.

After all of the super dramatic contestants were given the heave-ho last week, we’re down to the nitty gritty part of Dallas lawyer Rachel Lindsay’s historic season of The Bachelorette.

This week’s episode is an important one, too: It’s the week before hometowns, which is a huge near-final step because the guys get to take Rachel home to meet their families and make some lasting impressions. This week, though, the guy have to put themselves into position to make it that far — and in Switzerland, no less. Here, we miss out on a cocktail party, but we get three one-on-ones and one three-on-one.

Rachel, for her part, is ready for this. She’s confident in her decision-making, she tells the camera; the guys just need to trust her.

Still, Adam and Matt are anxious — and, since neither of them has had a one-on-one date yet, can you blame them? No, of course not. Plus, they’ll surely get their chances this week, yeah? Oh, they won’t? Never mind! The one-on-one honors go to Bryan, Peter and Dean, who’ve each had a one-on-one dates already and now double-dip their way to roses as a result.

That leaves Eric, Adam and Matt to fight over one final rose during the group date. It doesn’t take a rocket scientist to figure out they play: Rachel sends Adam and Matt packing, just as was telegraphed by their concerns.

Seriously, that was the whole episode.

On the other hand, we might’ve learned who the next lead Bachelor might be… so there’s that.

“I Love You” Utterances: 1. Bryan emphasizes what he’s already said: He’s falling in love with Rachel. Duh. We already knew this.

Cries: 2. Peter cries over his ex-girlfriend talking about their breakup. Rachel cries when she lets Matt and Adam go, even though she never really gave them a chance. Oh well!

Kisses: 6. All of the remaining contestants get smooched this week.

Exes Mentioned: 3. Bryan, Peter and Rachel each get all confessional about their last relationships.

So it’s pretty clear at this point that Peter and Bryan are the front runners. Dean’s just a little too immature for Rachel — anyone can see that. This week, that came in the form of him acting all silly when Rachel tries getting serious and asks him honest questions about his family. Sure, dude has an emotional past and a not-so-perfect family, but it’s telling he has to be forced into a serious discussion, right? Meanwhile, Rachel and Eric have a definite connection, but it just doesn’t seem as serious as the other ones. Now, here’s where it pays to be a veteran watcher of this show, though: If you know what you’re watching, then it’s obvious that Peter really gets The Bachelor edit here in this episode. His emotional retelling of his last breakup, him talking about a fear of letting someone else in and his loving another person — it’s all a perfect set-up for him to become the next The Bachelor. He’s nervous to love again? Rachel is unsure about choosing him? He’s got his heart broken in the past? Dude’s getting his own TV show, folks. And what does that mean? More than likely, the last man standing — and the one who’s getting engaged to Rachel — will be Bryan.

In past versions of this episode from previous seasons, the lead typically goes on three one-on-one dates with no roses handed out on those dates and with the only pre-ceremony rose of the week given to one lucky guy in the group date. Not so with this episode! From the beginning, Rachel said there wasn’t going to be a cocktail party, meaning that all roses would be given out on dates. Listen, I know it’s not much, but that’s a new trick we haven’t seen recently from the show. It’s nice being kept on your toes!

Next week, we go home with the four remaining contestants vying for Rachel’s heart! Are you excited to meet the families? From the previews, you should be: It looks like there will be some drama with both Eric and Dean’s not-so-perfect families. Meanwhile, Rachel will continue to question Peter’s commitment. But, hey, can you blame the guy? He could be next season’s Rachel!