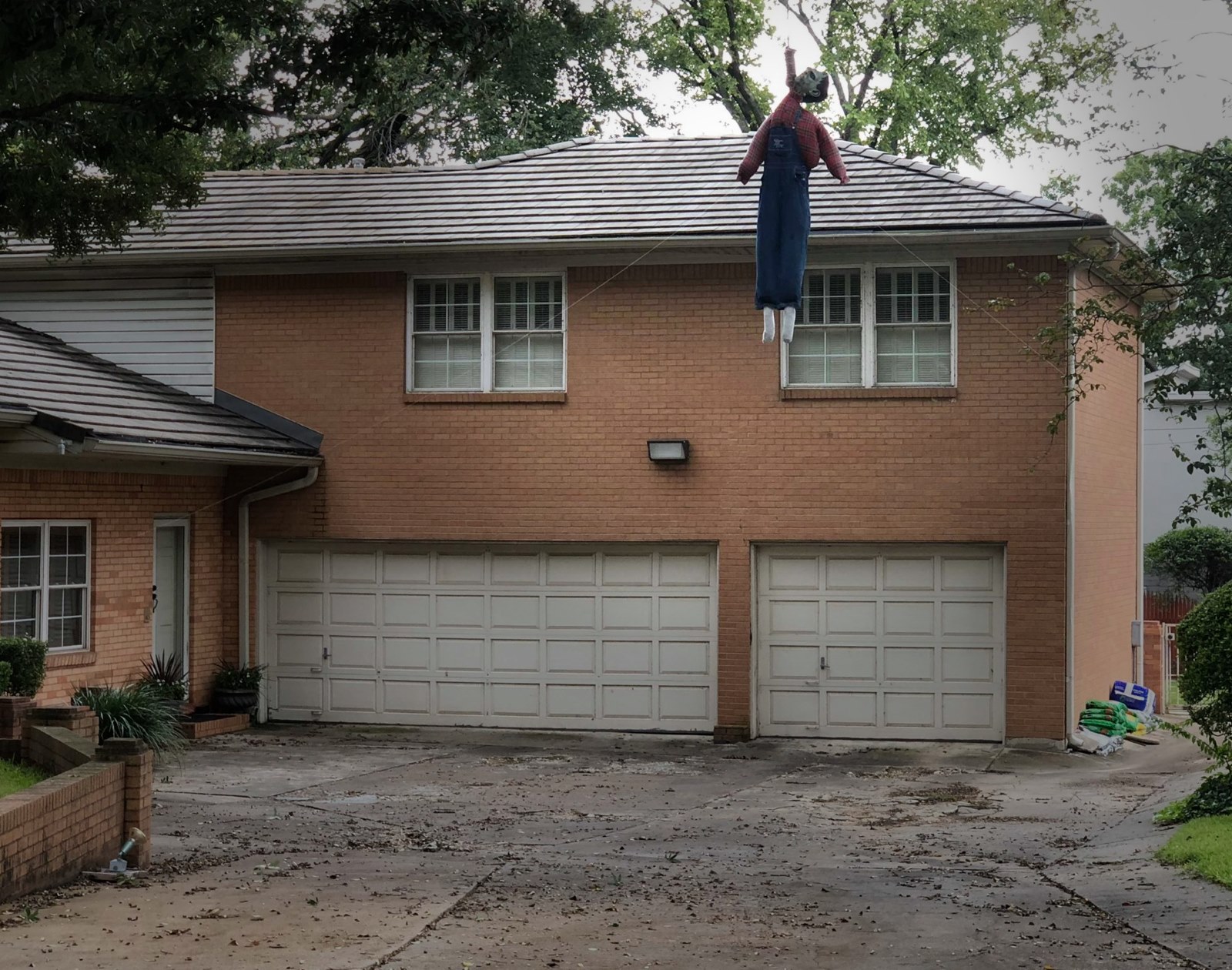 Unless You Want To Keep Being Called Out As Lynching-Loving Racists, It’s Probably Time To Cut The Rope On Your Racially Insensitive Halloween Decorations.

Dear You Lakewood Monsters Who Weirdly Who Hang Frankenstein’s Monster In Your Yard Every Year,

There’s no politically correct way to say this, but your Halloween decorations are freaking us the fuck out.

It’s not because they’re overly realistic or over-the-top gory. It’s because your scarecrow wearing a Frankenstein’s monster mask being hung in effigy — in an actual noose — is abundantly insensitive.

Surely, you must know this. 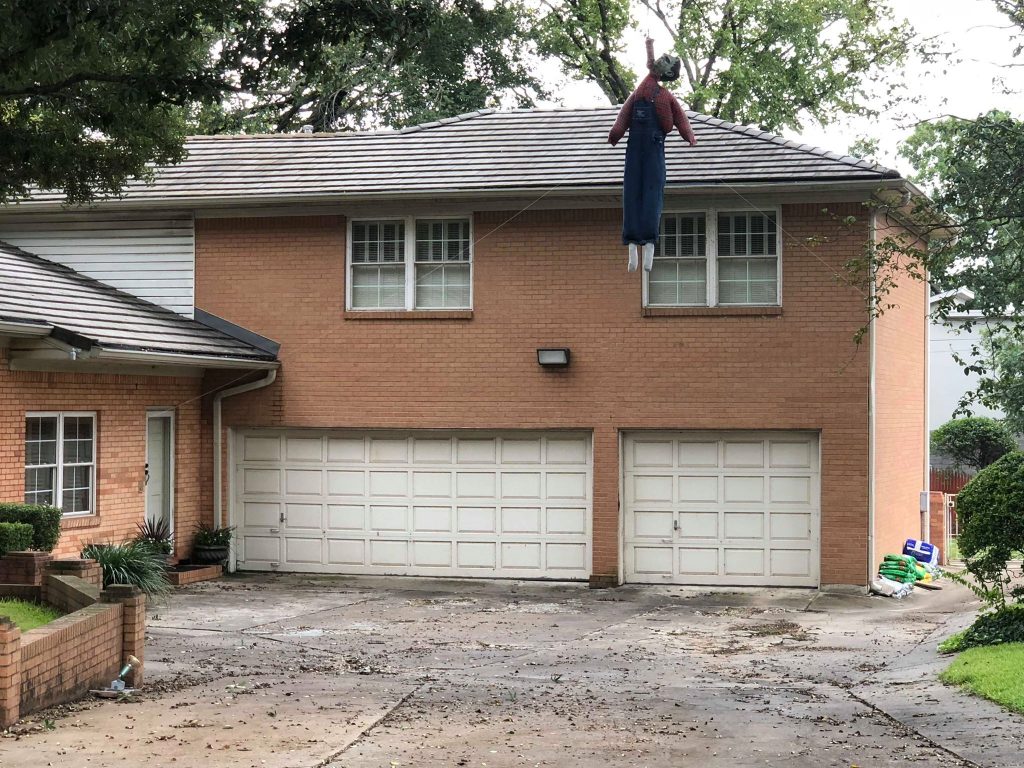 Let’s think about this. When is it ever really a good idea to hang someone or something in effigy? Let’s say you’re a colonist in the 1700s, hanging white public official Andrew Oliver in effigy as a form of protest against the Stamp Act. That’s a worthy cause, actually! Or maybe you’re a protester in the 1700s and you’re hanging politician John Jay in effigy due to what you perceive are treasonous acts. We’ll allow that, too.

Hell, maybe you’re just a pissed off veteran in 2018 hanging racist white president Donald Trump in effigy because his treasonous acts make you regret ever having served in the military. We’d say you should probably find a more modern form of protest — but hey, we get it, you’re old, and it’s wholly within your First Amendment right to do something like that, and, yeah, Trump’s an old white asshole. It’s tacky, but within the bounds of acceptability.

But you residents of Bob O Link Drive who are pulling this stunt under the guise of Halloween decorations in 2018? You don’t appear to be protesting shit! And not even your neighbors are buying the argument that your murderous display is a misguided attempt at bringing your ghoulish little grandkids a morbid form of “joy.” What kind of twisted little fiends are you helping raise here, anyway? And what’s the best case scenario? That they sublimate their bloodthirsty urges into socially acceptable lifestyles like E.R. doctors?

What’s more, those living on your street say you’ve been doing this shit for 40 years. Forty! Just because you’ve been doing something for a long time doesn’t make it OK. You know what lasted more than twice as long as that span? Slavery, which was legal in this country from 1776 to 1865. Heritage, as we’ve learned time and time again, is no excuse for hate.

One doesn’t have to look much farther than the patriotic song we sing ahead of our nation’s most popular sport to have any awareness whatsoever of the volatile nature of race relations in this country even today. Sure, maybe you’re hanging a fictional character there in Lakewood, and maybe you’re not intentionally trying to look like a lynching piece of shit in doing so, but you’ve got to have a better grasp of the optics here.

It doesn’t matter that it doesn’t personally offend you or some of the rich white folks living immediately next door to you — let’s face it, we know how much the houses cost on your street. The fact that it’s so hurtful to so many others in your neighborhood and the surrounding areas should be reason enough for you to willingly opt out of your First Amendment right to be a racist-adjacent asshole.

There are other ways you can decorate your house for the season, y’know. Some of them might even earn you positive press!

Instead, you’ve oddly decided to hang Victor’s monster in effigy. But, why? That poor guy spends, like, the whole damn book ostracized from society just because his grotesque features and yellow skin look a little bit different – even though he was nice enough to always be collecting firewood for that family in the cabin.

Hey, you know who else discriminates against people based on skin color? Fucking racists, that’s who!

If you really must show your adoration of a character from a book (that we’re guessing you never actually read) this Halloween season, why not at least just make your decoration stand up on the ground? Or, better yet, depict him floating away on an iceberg, vowing never to harm again because it doesn’t bring him any peace. (That’s how the book ends, by the way. Never once is he himself actually hanged.)

Plus, we’ve gotta assume that climbing up that tree year after year has to get old after a while – much like standing your ground on such outdated platforms.

In short: Just because you can, doesn’t mean you necessarily should.

Happy Halloween,
Cory Graves and the rest of the Central Track staff, who aren’t social justice warriors but possess even the smallest modicum of cultural awareness and perhaps one iota of sensitivity.