Amidst… Everything, Where’s Jerry Jones? 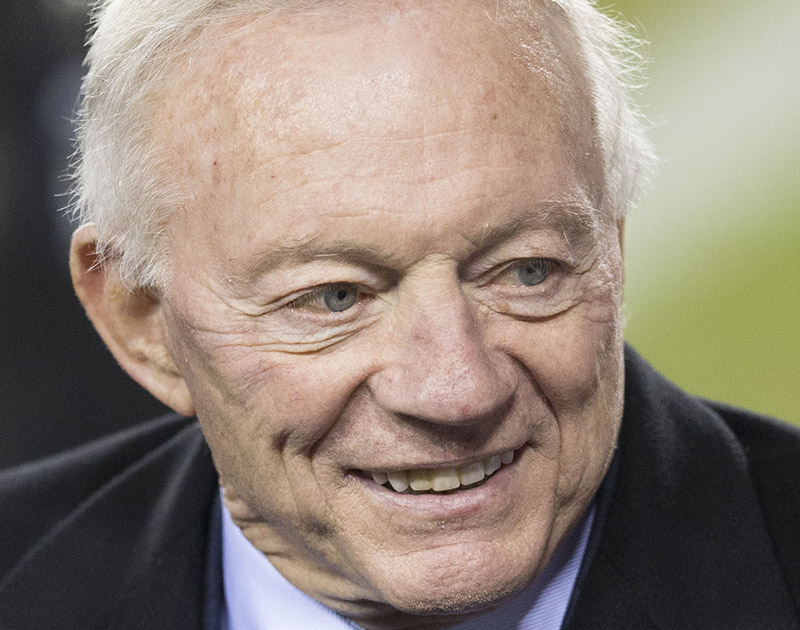 Jerry Jones Is Considered A Lion In The Pantheon Of Sports Owners, But His Silence In The Face Of Recent Civil Rights Protests Roars Loud And Clear.

On a hot Texas Sunday back in August of 1999, Jerry Jones and his family boarded two separate vehicles en route toward their church in Highland Park.

On the family’s schedule that day was the christening of Jerry Jones’ grandson. The last thing the wealthy, well-known family expected as they drove through super affluent neighborhood was that the patriarch of their family would end up in police handcuffs by day’s end.

But that’s what happened. The second vehicle in the Jones family convoy, a Chevrolet Suburban, was pulled over for speeding. The vehicle Jones himself was in (both vehicles were operated by a Jones family employee) got stopped as well.

As a Highland Park police officer made contact with the family Suburban, Jones exited his vehicle and walked toward the officer. He told the officer that the family was in a rush to make it to his grandson’s christening, and he wanted to know if he could get all this business over with and just take his family on to the church.

The officer told Jerry Jones: “I’ll do this as fast as I can.”

But Jones decided his family was going to that church right now, and he instructed his drivers to take off for the church despite the police presence. The officer, flummoxed, radioed for backup — and, when that second police car attempted to pull the Jones family Suburban over, the car kept on keeping on.

It was, for all intents and purposes, a full-on a police chase at this point — a slow one, granted, but a pursuit nonetheless.

Upon arriving at the church, Jones dropped his family off before having his driver head to a nearby private drive. There, immediately, Jones was handcuffed and arrested for his indiscretion. The charge? Fleeing the scene — a Class B misdemeanor at the time, punishable by up to six months in jail and a $2,000 fine.

Later, Jones would release statement that read, in part: “I am sorry this has become an issue. The Highland Park Police Department is outstanding, and they were doing their job.”

Still, he showed his privilege on that day just as he has been of late.

This much is for certain: Jerry Jones is not shy. While his football acumen is called into question every year, especially during the NFL Draft, his business and marketing prowess is deservedly renowned. But he is not shy, never that.

For a man who loves to give the media great quotes, tongue-in-cheek comments and sometimes even phrases that would make a trucker blush — “I want me some glory hole!” is a recent favorite — Jones has been shockingly silent of late.

In the world of sports franchise ownership — a world made up of ultra-wealthy and mostly ultra-private individuals who are predominately older white men — Jones stands out. Since purchasing the Dallas Cowboys in 1989, his franchise has experienced a meteoric rise in stature and value, a growth mirrored in step by his own personal rise in wealth and power.

As the owner of the most valuable global franchise in sports, Jones is, by most any accord, the most powerful man in sports. Wearing this crown means his words and actions set the tone for his peers.

And, over the course of the last few months, Jones’ silence has proved deafeningly loud.

We are undoubtedly in the midst of the most radical period of change of our lifetime. A Civil Rights movement mired in a global pandemic sets the scene for a country undergoing a transformation. As protesters clash with police in response to decades upon decades of police brutality, some notable voices in our community are standing in solidarity with marginalized people as others continue to peddle the tone-deaf narratives that aided in bringing about the situation the protesters hope to change.

While Jones finds himself firmly ensconced in the latter camp, his closest peer in town is intentionally placing himself in the former.

Earlier this month, when conservative Dallas radio talk show host Mark Davis randomly tweeted out that, if a Dallas Mavericks player were to take a knee during the national anthem anthem this season, he’d boycott the team, Mavericks owner Mark Cuban in his tweet — who Davis had tagged in his tweet — promptly delivered an NBA-worthy dunk of a reply neatly wrapped up in one succinct word: “Bye.”

The exchange that followed eventually escalated to the point that Texas’ junior U.S. Senator Ted Cruz joined the fray, doubling down on the false narrative that kneeling during the national anthem is disrespectful to The Troops. But Cuban stood his ground, and the two engaged in a back-and-forth Twitter exchange that predictably went viral.

If nothing else, that public discourse made it clear that Cuban is at least trying to understand what Black Americans are fighting for in our streets.

But, if you wanted to know which side of history the most powerful man in sports is on in this debate, at a time where his cosign could provide meaningful help, we’ve received only radio silence from the walking quote machine. Sure, his organization released a two-minute video highlighting its community initiatives and attempts at discourse with are law enforcement officials, but even that came off as very surface-level — no meat.

Is that surprising? Not really. A look back at Jones’ record regarding protests during the national anthem shows an owner more concerned with appeasing the president than anything else. He’s repeatedly parroted the false narrative that kneeling during the anthem is somehow disrespectful of a country whose constitution celebrates free speech. His message to his players has always been clear: Toe the line and stand for the anthem — or else.

But the current civil rights movement certainly feels different. This is a new fight. And more and more higher-ups within the realm of sports aren’t just embracing player protests, but actually joining in on them.

Is it possible that Jones, whose words and actions set the tone for a bevy of powerful and influential people across the nation and sports work alike, is only silent of late because he’s taking this time to listen and learn? We can only hope.

But those on his payroll aren’t giving him that leeway. Several Cowboys players have spoken up about Jones’ silence throughout these times. Defensive tackle Gerald McCoy openly questioned Jones’ silence in the wake of the protests. Star defensive end DeMarcus Lawrence — himself a phenomenal quote — only marginally disagreed with McCoy’s take.

Still, there’s no denying that the normally verbose Jones has been shockingly quiet in recent months, allowing other NFL owners to emulate his course, much to the determent of meaningful change.

Thing is, it’s not like Jones doesn’t have the berth to speak on the matter. If he really cared about the mostly Black men under his employ, all he’d have to do is reflect on what happened to him back on that hot August Sunday in 1999.

There’s not doubt about it: The outcome of that 1999 day — especially in the enclave of Highland Park, with its history of police racial profiling — would assuredly have been different had a Black man endured that experience instead of the most powerful man in all of sports.

Yet, amid the most important civil rights protests of our time, Jones — who normally won’t shut up, not even for his own good — remains mum.

And, especially in lieu of the good that its opposite could potentially being, that silence is deafening.

As other storied franchises across sports show their support for the movement, it’s a fair question to ask: How ’bout them Cowboys? And, more specifically, how ’bout Jerry Jones?