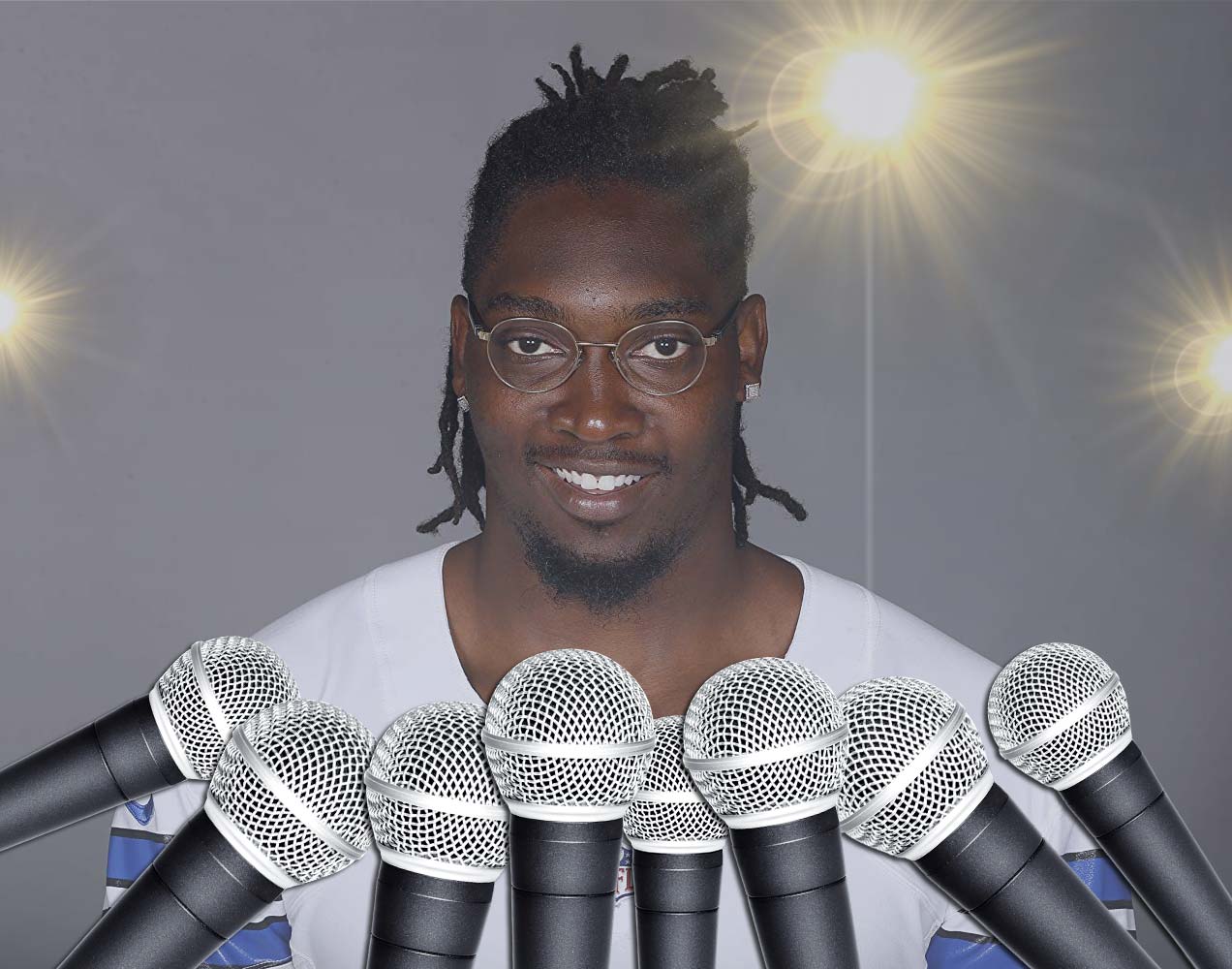 The Dallas Cowboys’ Star Defensive Lineman Is Unquestionably A Monster On The Field, But He’s Just As Entertaining With A Recorder Shoved In His Face, Too.

Demarcus Lawrence is a beast.

There’s no question about it. The Dallas Cowboys’ star defensive end tallied 14.5 sacks in his breakout 2017 season, then followed that up with another 10.5 this year when everyone in the league knew to game-plan for him. Without question, he’s one of the main catalysts of the resurgent Cowboys defense, a unit worthy of its Hot Boyz nickname. More than that, he’s become one of the best defensive players in the NFL.

Lately, though, the public has been introduced to another of Lawrence’s talents: The guy’s a quote machine.

We first saw hints of this of Lawrence when it leaked in the offseason that the Cowboys were considering slapping the franchise tag on him to keep him from entering free agency — a move that would guarantee the 26-year-old Boise State product a cool $17.143 million in 2018 salary in 2018. His response on Twitter to that news going public?

Given his stellar play for the team this year, you obviously know how that played out. But since securing his bag, he’s only gotten more outspoken, becoming something of a media darling.

Seems like every week, he’s dropping another money quote that gets used in every Cowboys article run round town — and in national media circles, too. These days, be it mid-week on the practice field, pregame in the locker room or at the podium in a post-game presser, any time the man they call “Tank” is ready to address the media, there’s a rush to cover whatever he has to say.

It’s been genuinely cool to watch him come into his own and flash some personality like this, too. At this point, he might be the biggest Cowboys star to so bluntly speak his mind since Terrell Owens.

Even so, Tank’s vibe is decidedly different from T.O.’s brand of braggadocio. Lawrence isn’t cocky so much as uncensored in his confidence. Mostly, his expressive verbiage feels representative of his hunger to win and his desire to take this team as far as he can.

That in mind, we present to you the best quotes Lawrence has dropped this season — well, so far, anyway.

“I’d probably play kicker if I had a leg. They show up 10 minutes at practice and then they’re gone for the day. That’s a great opportunity to get paid.”

Asked what other position he’d like to play beyond defensive end, Lawrence shared this gem with Know Más’ Ambar Garcia. We’re about it! Imagine a 265-pound, 6-foot-3 monster icing game-winning field goals from 50 yards out.

Not all his quotes are comedic! They’re not all about him, either. After this season’s opening week loss, Lawrence made it clear to the Dallas Morning News that he prefers wins over padding stats.

“You hit a mufucka in the mouth and they’re not doing what they’re regularly doing, putting up 50 points, they start to get a little distressed. Now, you got them where you want them at, and then you choke their ass out. We got to do what we’ve got to do. This is life or death right here. Especially for me, because it means too much.”

On November 29, the Cowboys snapped the Saints’ 10 game winning streak. Days prior, 247Sports quoted Lawrence showing just how pumped he was heading into the match. It was the hot story of the week, as analysts criticized Lawrence for so confidently talking about his on-field strategy. Well, turns out Lawrence could walk the walk, too.

In a Week 4 match up against the Detroit Lions, Lawrence had himself a career day, reeling off three sacks among eight tackles. His pre-game speech with to fellow Hot Boyz, as captured by NFL Films, set the tone for that performance.

“Just to have his Hall of Fame qualities around you — and his crazy. You have to be crazy to play this game. I don’t show it all the time, but deep down inside, I’ll slap the shit out of all y’all — like for real!”

Tank might’ve scared a few reporters with this quote captured by Cowboyswire in regards to Cowboys legend Charles Haley stopping by a few practices! He didn’t smirk or smile. Didn’t sugarcoat it at all, really. And, in the process, he shared some great insight into what makes an NFL player great.

“Growing up, I wanted to be an astronaut. I’m very fascinated with space and time. It’s pretty cool if you think deeply about it.”

Know Más’ Ambar Garcia got Lawrence to share this one. And hey, if he keeps playing like this, maybe he’ll be able to afford a spaceship one day.

“I think we can take it all the way with this defense.”

While he definitely has a wild and playful side, Lawrence’s quotes portray him as focused — and always with the thought of hoisting a Lombardi trophy at the front of mind, as this quote he gave to 247sports notes. That’s what you want in a still-coming-into-his-own player who has the real potential to one day go down as a Cowboys legend — the understanding that Super Bowls are what career-long resumes are built upon.

“He’s a quarterback. I don’t like quarterbacks. My impression is the same. I go into every week wanting to take the quarterback’s soul. You get the look in a man’s eyes and see fear in his heart. That’s when you know you got him. That’s how I play the game, and that’s how we’re going to dictate the game.”

Dropped just this week to the Dallas Morning News, Lawrence’s latest viral quote came in response to him being asked for his thoughts on Los Angeles Rams quarterback Jared Goff. Hilarious and intimidating at once — he sounds like Shang Tsung from Mortal Kombat — a quote like this just shows how pumped he is to take on the challenge awaiting the Cowboys in L.A. for the Divisional Round of these 2019 NFL Playoffs. Dude’s ready for war! As a fan, this quote’s got exactly the kind of message you want your players to project — the kind of spirit that makes you think there’s a chance this team will move on in the playoffs, giving Lawrence more time in front of a mic. And after a season of quotes and play like Lawrence has had, yeah, we’re definitely here for all that.