A History Of Bad Things Jerry Jones Has Said And Done. 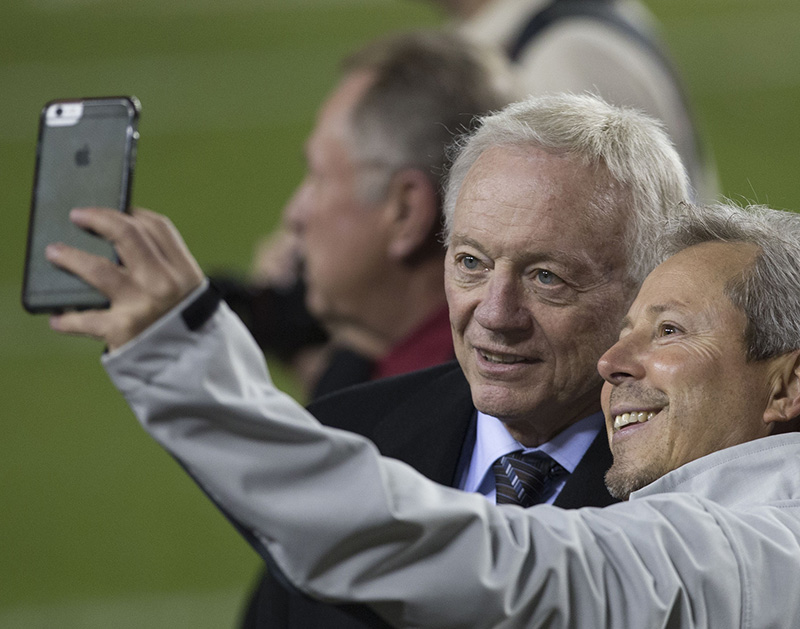 The Dallas Cowboys Owner Is The Face Of America’s Team, And It’s That Visibility That Makes Just About Everything He Does In Public To Be So Thoroughly Scrutinized.

Dallas Cowboys owner Jerry Jones’s PR team recently had its work cut out for it when a 2013 video surfaced of him saying “You know he’s with a black girl tonight?” in a message recorded for a newly wedded wife.

Now, at first it might seem like an innocuous statement — and perhaps there is some context missing — but what Jones is clearly saying here is that this newly married man’s/engaged man’s infidelity is made worse by the fact that he’s doing it with a black girl.

The guys who shared the video said they did so because of the racial tension that has dominated the conversation in the NFL of late.

And while you would expect this to be a figurative silver bullet that could potentially force Jones out of the league and the Cowboys’ front office, there are plenty of other things that Jones has said and done that are racially charged or are just flat-out terrible — and here they are. If we missed any, please share them with us.

When Jones said players who kneel during the national anthem would be benched.
When Jones said that he would consider benching any player who disrespected the U.S. flag, he meant that the players signed to his team are not entitled to use the platforms they have worked for their entire lives to stand up for what they believe in. What’s worse is that just two weeks prior, he took a knee with his players on the field, saying that he stood by them only to pull the rug out from under them so soon after.

When he defended the Houston Texans owner after the “inmates” comment.
A few weeks ago, Texans owner Bob McNair said that “We can’t have the inmates running the prison,” in reference to NFL players choosing to kneel in protest at the start of games, a totally tone-deaf comment that landed the owner in hot water. Jones would go on to say that “It’s so unfortunate that he’s had this happen for him.”

Signing Greg Hardy.
The Cowboys signed a known domestic abuser in 2015 and Jones stood by grinning as he signed the paperwork to become a Cowboy.

Taking Jimmy Johnson to eat at Tom Landry’s favorite restaurant.
So the day before Jones purchased the Cowboys back in 1989, Jones ate with Jimmy Johnson, whom he would eventually hire after firing legendary coach Tom Landry, at Landry’s favorite Mexican restaurant. While this doesn’t necessarily speak to Jones’ views on race or domestic violence, it’s just a dick move.

Going to war with Roger Goodell after Ezekiel Elliot’s suspension.
The Cowboys owner reportedly said “I’m gonna come after you with everything I have,” to Goodell back in August. “If you think Bob Kraft came after you hard, Bob Kraft is a pussy compared to what I’m going to do.” Say what you will about Goodell and his handling of domestic violence cases, but at least he’s trying to rectify his mistake with the Zeke situation and Jones just clearly isn’t having it.

When he was caught with strippers.
So back in 2014, some photos surfaced of the married Jones with two probably 20-something-year-old strippers at a restaurant. He appears to be fondling one in one photo and has another near his crotch in a different shot. Jones eventually commented saying that the photos were “misrepresented.”

When he validated the lack of playoffs success because of high ratings.
The Cowboys haven’t won a Super Bowl since 1996, and since then, they are 3-10 in the playoffs. Still, Jones said about the playoffs in 2014 to the Dallas Morning News: “We have not gone, yet we’re the most popular TV show there is on television. We lead all teams in TV ratings. We lead, 24 of the last top 25 shows were NFL games, and any time your Cowboys play they’re up there at the top and leading. Now, what causes that? What causes that is creating some aura, creating some excitement. We want to use that as best we can to make this award show the greatest ever.”