After A Brutal Assault In Deep Ellum, What Comes Next? 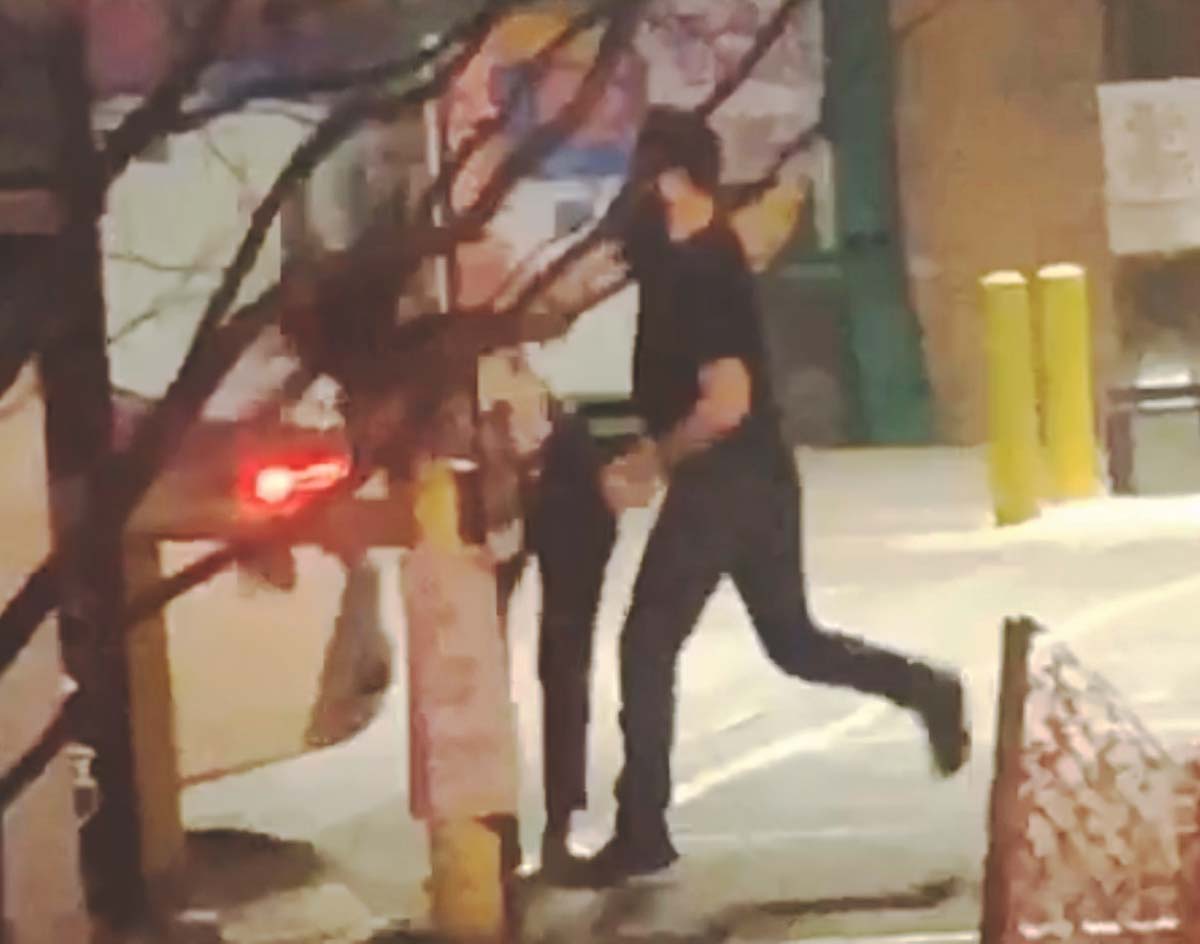 In The Wake Of A Horrific White-On-Black Attack, Frustrations Abound And Protests Are Plentiful. But Will Local Law Authorities Do The Right Thing?

Update at 1:30 on March 28: After a week of protests across the city, the Dallas Police Department announced today that it has concluded its investigation into the matter — but not before adding a felony and an additional misdemeanor to the charges now faced by Shuffield. Head here for all those details.

Locally and nationally, the brutal, caught-on-camera assault of 24-year-old L’Daijohnique Lee by former High & Tight Barbershop employee Austin Shuffield in Deep Ellum during the early morning hours of March 21 has spurred a range of emotions spanning from disappointment to outrage — not necessarily just about the attack itself, infuriating and egregious as it was, but in the way it’s been handled by local law enforcement.

On Saturday night in Deep Ellum, those sentiments came to a crest as nearly 75 protesters assembled to vocalize to the Dallas Police Department — and the watching world — that their response to this white-man-on-black-woman assault, which  resulted in Lee being hospitalized for head injuries, has not been enough. Furthermore, these protesters expressed a concern that this reaction is ultimately indicative of larger problems within the community and in DPD’s interactions with the citizens it’s sworn to protect and serve. 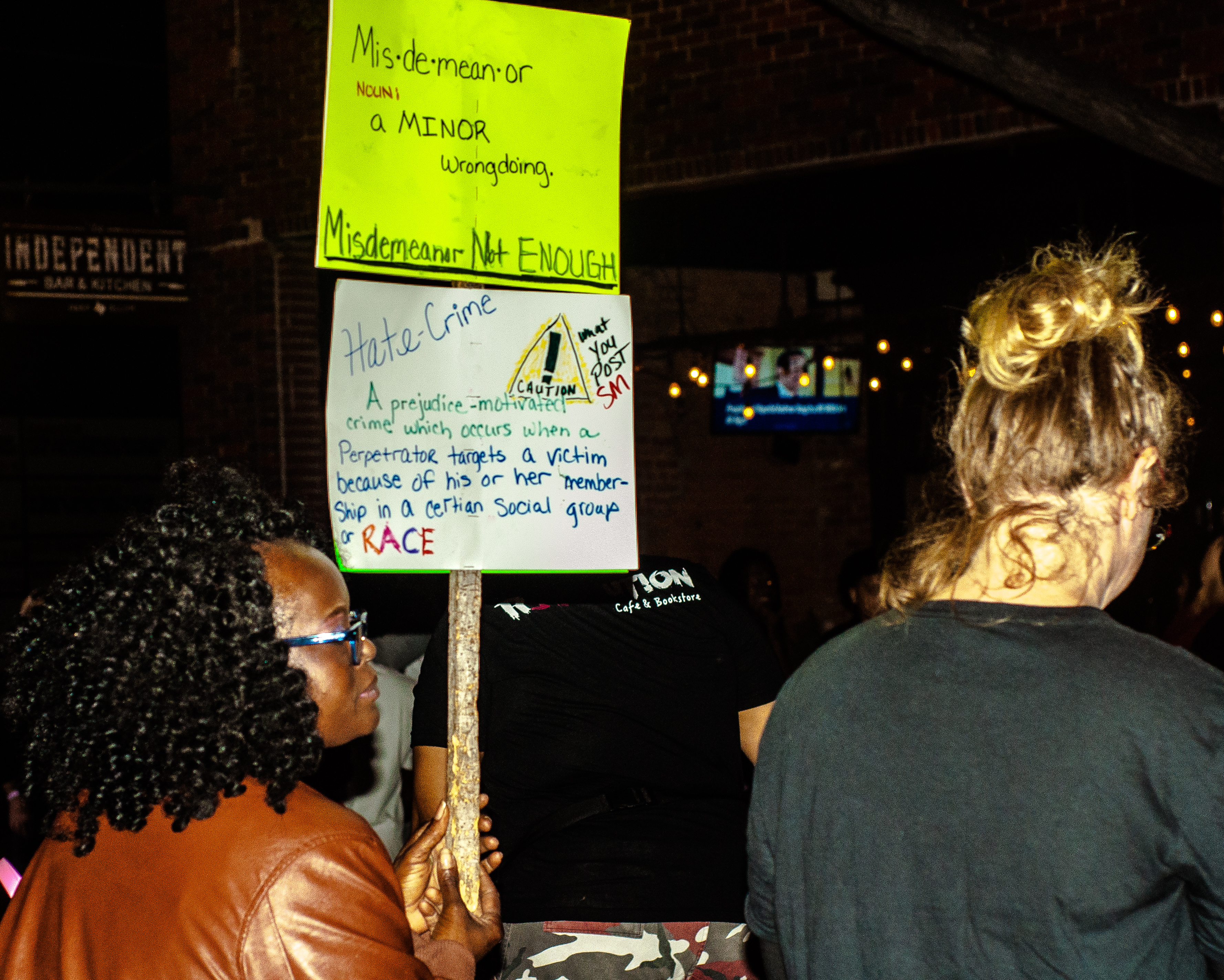 Saturday’s protests were just one of many taking place in recent days — with more set to take place over the course of the coming week — meant to express the larger frustration that has been festering as a result of the incident, which allegedly started out as a parking dispute and has since drawn ire from such national presences as activist/journalist Shaun King, comedian Chelsea Handler and rapper T.I. 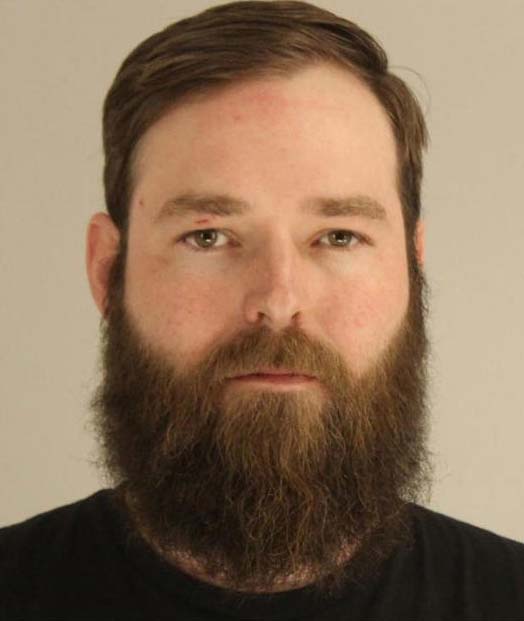 The resounding reaction to date, summed up rather succinctly in recent press appearances by Lee’s attorney Lee Merritt, is that the 30-year-old Shuffield should face greater repercussions than the charges Dallas police filed against him when booking him on Thursday morning — misdemeanors for assault causing bodily injury and interference with an emergency call that resulted in Shuffield being able to post a $2,000 bond that earned him a release from jail by Friday morning.

Merritt is but one of many — including the ever-vocal Next Generation Action Network founder Dominique Alexander — currently pleading for the charges to be upgraded to a hate crime and/or an aggravated assault with a deadly weapon, given the fact that Shuffield pulled a gun on Lee during their argument. Curiosity abounds, too, over the revelation that a public intoxication charge did not appear in jail records, despite police noting in their reports that they smelled alcohol on Shuffield when speaking to him.

It should be noted that many area figures of note — some directly involved in the case, some not — have also released statements about the incident in the last few days.

Regardless, Saturday’s protests in Deep Ellum — two separate movements, although each shared a goal of holding the community to higher standards and promoting safety for black women — were inevitable, as words alone simply cannot assuage this level of unrest. 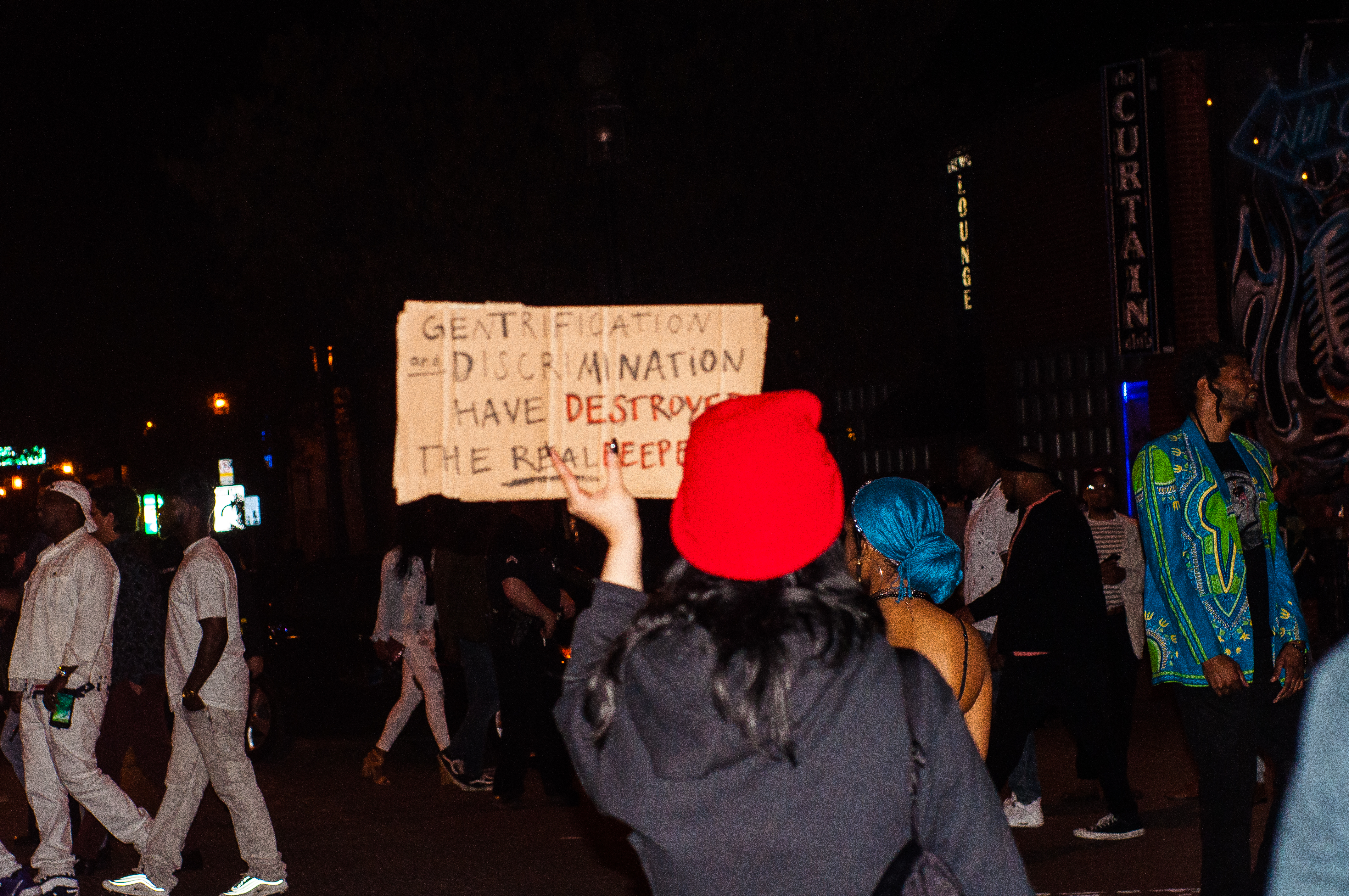 The Dallas-based Black Women’s Defense League centered its efforts on Saturday around a block party meant focus on the more positive aspects of black communal gatherings. After initially taking place on Commerce Street earlier in the evening, that gathering eventually joined forces with the Alexander’s Next Generation Action Network-led efforts on Main Street, right by High & Tight.

Their combined actions began small, while still managing to succeed in a goal of blocking traffic on the corner of Crowdus and Main streets. Beyond sideline spectating, the efforts initially drew little attention from the additional police who’d been deployed to the neighborhood as part of precautionary safety measures the department was taking in response to the assault and its widespread reactions. 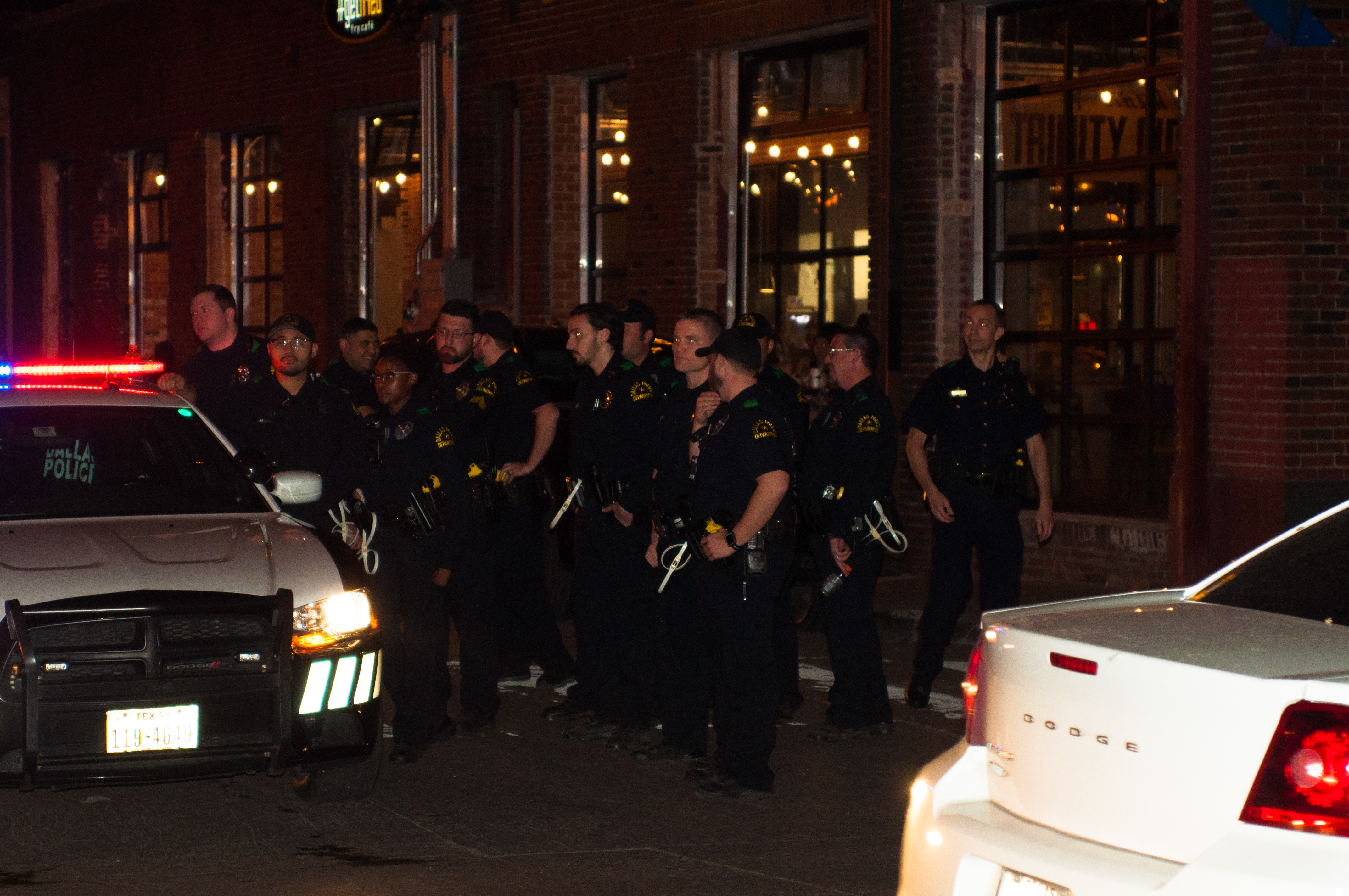 Passersby brimmed with curiosity at the effort, though, with some simply offering words of support and encouragement, and some even leaving the sidewalks to join protesters on the street. Yet others taunted and berated the crowd — most surprisingly, a number of black women who seemed unaware of the purpose behind the movement.

See Also: Why Is Crime On The Rise In Deep Ellum? // Crime Stats And Recent Horror Stories Alike Suggest That Deep Ellum Is Becoming Increasingly Dangerous. But What’s To Blame For It?

Though the inspirations behind each gathering on Saturday differed, the protesters’ combined efforts mostly centered around messages of love, prayer, signage and verbal confrontations with the on-looking DPD officers.

One protester, a black woman, directly addressed some of the black police officers on the scene, reminding them that she — and Lee, the victim in this case — looked just like their loved ones. Another protester actively checked the open data listings for 911 calls into the area to help monitor the police’s response to their efforts. 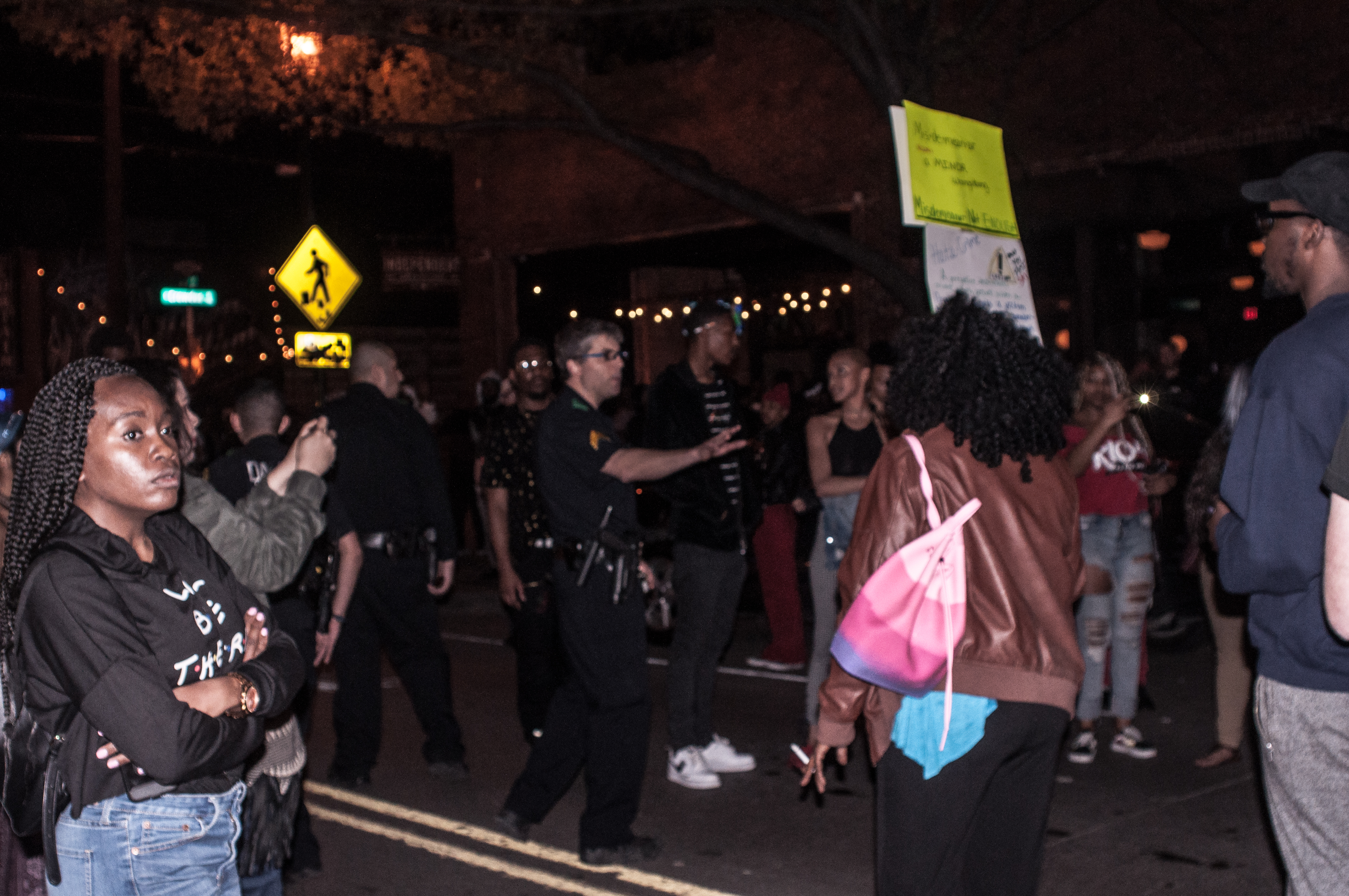 Right around midnight, police issued three warnings for the crowd to disperse before eventually clearing the streets with the aid of firetrucks and ambulances. The tension leading up to this point was more dramatic than the actual act, as the police barely seemed interested in breaking up the protest in the first place.

See Also: DPD Is So Fucked. // In Which We Run Down The Many, Many Serious Problems The Dallas Police Department Is Facing.

As the combined protests disbanded, the Black Women’s Defense League reassembled to host a brief self-defense clinic in its original block party location on Commerce Street. Surrounded by allies in protest, as well as a few interested onlookers, this small gathering seemed to be a fitting end to a night of peaceful yet powerful demonstration. In addition to tips on how to dislodge potential attackers, the group also worked to help ensure that any individuals walking alone throughout the neighborhood safely made it to their destinations on this night. It also helped contact potential rides for those in need.

It’s important to point out that, while the focus of the night was undoubtedly on safety for black women in Deep Ellum, people of all types gathered to promote safer in the neighborhood. It wasn’t lost on any of the protesters that what happened to Lee could happen to any of us, even if black women may often be the most vulnerable and least protected in these situations.

On a similar note, it’s worth acknowledging too that police only started to set up their perimeter around a sector of Main Street after the black women at the center of the efforts gained considerably louder and more diverse support from others.

Time will tell if DPD and/or the DA’s office do what many on Saturday would deem as the right thing to do in this case.

At this point, it’s tough to say if they will.

But, as a black woman myself, you’ll pardon me if I don’t hold my breath as I await their decision.

In the wake of recent events, the Black Women’s Defense League will host a community forum called “I Am My Sister’s Keeper” on Thursday, March 28, at The Nines. Head here for more information on that event.