DPD Is So Fucked. 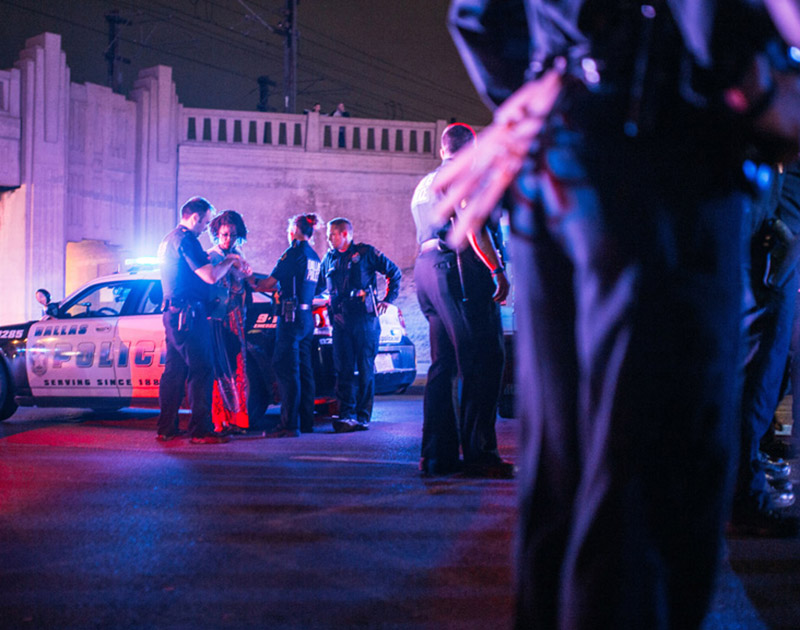 In Which We Run Down The Many, Many Serious Problems The Dallas Police Department Is Facing.

When five Dallas police officers were killed in July’s Downtown shooting — the deadliest day for law enforcement in this country since 9/11 — our community stood by the police force.

One way locals showed their support was by actually even stepping up and directly applying to join the force. In fact, DPD saw a major increase in applicants immediately after the attack. And, for sure, that surge had been badly needed for a while; the department had already been dealing with staffing struggles, and officers were departing the force at an alarming rate.

Unfortunately, many of the concerns that led to those departures are still ongoing. And it’s not clear that the summer’s brief influx of bodies presents a long-term fix.

The Dallas Police Department’s struggles have been well-documented over the past few years. These stories can be alarming, and sometimes embarrassing. Unfortunately, the flood of reports can also make it harder to maintain a clear mental picture of just how much the DPD has had to deal with of late.

We aren’t in a position to solve these problems for the department. But we are in a position to put together an informal list of everything they’re up against, so as to make more clear their troubling state.

For the record, this is not an attempt to discredit or mock the DPD. The department’s being understaffed, disenfranchised and overwhelmed affects our city, and that puts people at risk. We just want people to be aware of the issues as we hope the department finds a way out of from the avalanche of crises and controversies at their door.

That said, let’s jump right into the many, many issues the department is currently facing.

Gang violence is on the rise. One alarming sign of DPD’s current state is how the instability of our police force is having real effects on the community. This can be most immediately seen in the spike in gang activity within the city. Dallas does indeed have a task force dedicated to gang activity, but its efforts have been badly drained due to dwindling resources. At this point, the gang unit, which once boasted 30 members, is a shadow of its former self, having lost a significant number of officers from its roster. This news is upsetting enough by itself, but the concerns are compounded by suggestions that Dallas is trying to downplay the significance of gang activity for the sake of keeping a good public image.

Pension woes are a big freakin’ deal. In case it’s somehow slipped your mind, ongoing problems with the DPD’s pension could potentially bankrupt our city. Read that last sentence again. Bankrupt. We included the people behind the pension calamity in our list of Dallas’ worst people of 2016, but the problems with the fund technically started to form more than two decades ago. Politicians had approved a wildly generous pension system to encourage senior officers to stay on the force longer — a generosity justified with some accounting predictions that ranged from highly optimistic to downright dubious. At this point, it’s obvious that the pension trust failed to provide the needed funds to keep the program viable. What happens when you can’t guarantee guaranteed money to people who signed up for it? For one, you have a financial crisis that could disrupt our city’s entire budget. For another, it makes recruiting harder; it’s tough to promise pensions to new recruits when current officers are being asked to give up funds they were told they’d eventually receive. More on that later.

Cops say they’re not comfortable living in Dallas. Back in 2015, Mayor Mike Rawlings called out a peculiar issue with the city’s police and fire departments — that many cops and firefighters who work in Dallas don’t actually live here. One of the reasons cited for this disparity was that it’s cheaper to buy a home outside of Dallas. But some who spoke about their decision to live elsewhere also criticized the quality of Dallas schools and expressed a desire to minimize contact with the people they’d arrested while off-duty. Those are fair concerns, but when officers aren’t part of the community, it can create a sense that the police in certain areas aren’t there to provide assistance so much as they are to impose their authority.

Officers are paid poorly. “Low pay” is an apt summary of several reasons the Dallas Police Department is fighting to keep its staff levels up. The department simply isn’t matching the pay that neighboring towns and cities can offer. We’re not just talking about suburbs here, either: Fort Worth also pays its officers significantly more money than Dallas does. Also, y’know, there’s that justifiable lack of faith in the pension system again. To be fair, the city has pledged to improve officer salaries, but that claim received a prompt rebuke from then-Dallas Police Association president Ron Pinkston, so its allure may be limited.

Recruitment competition with neighboring forces is a real issue. How much can you make as a police officer in the DFW area? That can depend on where in the region you wind up. Dallas is surrounded by suburbs that have their own police departments, and those departments are also trying to stay staffed, as they should. But fighting against low pay and low morale, and having so many neighboring organizations around to lure away good officers, makes the DPD’s efforts to retain people especially daunting.

There just aren’t enough cops. Near the end of 2016, reports circulated about another alarming drop in the number of officers working for the DPD. Some of the blame for this report was pinned on news of the force’s pension being in such a dire state, but the loss of Dallas officers was occurring before that news fully broke. Pay is a common concern, but low morale has apparently also driven people away. Simply put, it’s hard to police a city when you don’t have enough officers. What’s frustrating is that low staff can beget frustration and low morale, which can lead to more departures. It’s a vicious cycle.

There’s an ongoing leadership vacuum. David Brown presided over the Dallas Police Department during July’s mass shooting, and his leadership in that time was universally praised in the media. But his time in that role previously? It wasn’t so positive. Brown faced regular criticism, and struggled to keep officers happy as he attempted to implement big changes that would prioritize community policing, and weed out bad officers. He retired last October, and an already-struggling department has relied on the stewardship of interim police chief David Pughes in the meantime.

Crime rates are rising. You might have guessed this when we talked about the rise in gang activity, but crime in Dallas is trending upward. A review of crimes committed in Dallas in 2016 found a rise in murders, and overall violent crimes between 2015 and last year. The department is still without a permanent police chief, and they’re still struggling to find new officers, so the outlook for 2017 isn’t rosy.

The department has some serious race relation problems. Last March, the Dallas Black Police Association called for an inquiry into a racist social media post that received support from white DPD officers. The horrific post featured a man in blackface with a noose around his neck. The idea that any officer would respond positively to something that hateful is galling; no matter how short-staffed the department is, there is no value in keeping personnel who possess the inherent ugliness to enjoy something as toxic as that post.

Cops are being forced to work shifts they don’t want. Attempts to better respond to rising crime rates has led to the moving of officers into different roles and different shifts. Unfortunately, it turns out police officers – like most people – aren’t keen to be moved to an evening or overnight shift, and the department’s already battered morale has taken yet another hit as this reshuffling has taken hold.

Even the department’s community policing policies are receiving backlash. During his time in the position, Chief Brown was clear about his commitment to community policing. Essentially, that meant finding ways to connect with the people on the ground, and building positive relationships with them. Brown’s emphasis on community policing has been credited with helping the DPD significantly reduce the number of excessive force complaints received against officers. In the aftermath of July’s mass shooting, one frequently cited area in which the department was lauded was how it had avoided the kinds of incidents that had led to understandable challenges and protests from citizens throughout the country. However, those same policies have provoked a backlash from some officers, who feel these goals have led to increased oversight and restrictions on how they perform their duties. And so even the one positive the force appeared to be able to hang its hat upon has now also become a negative.