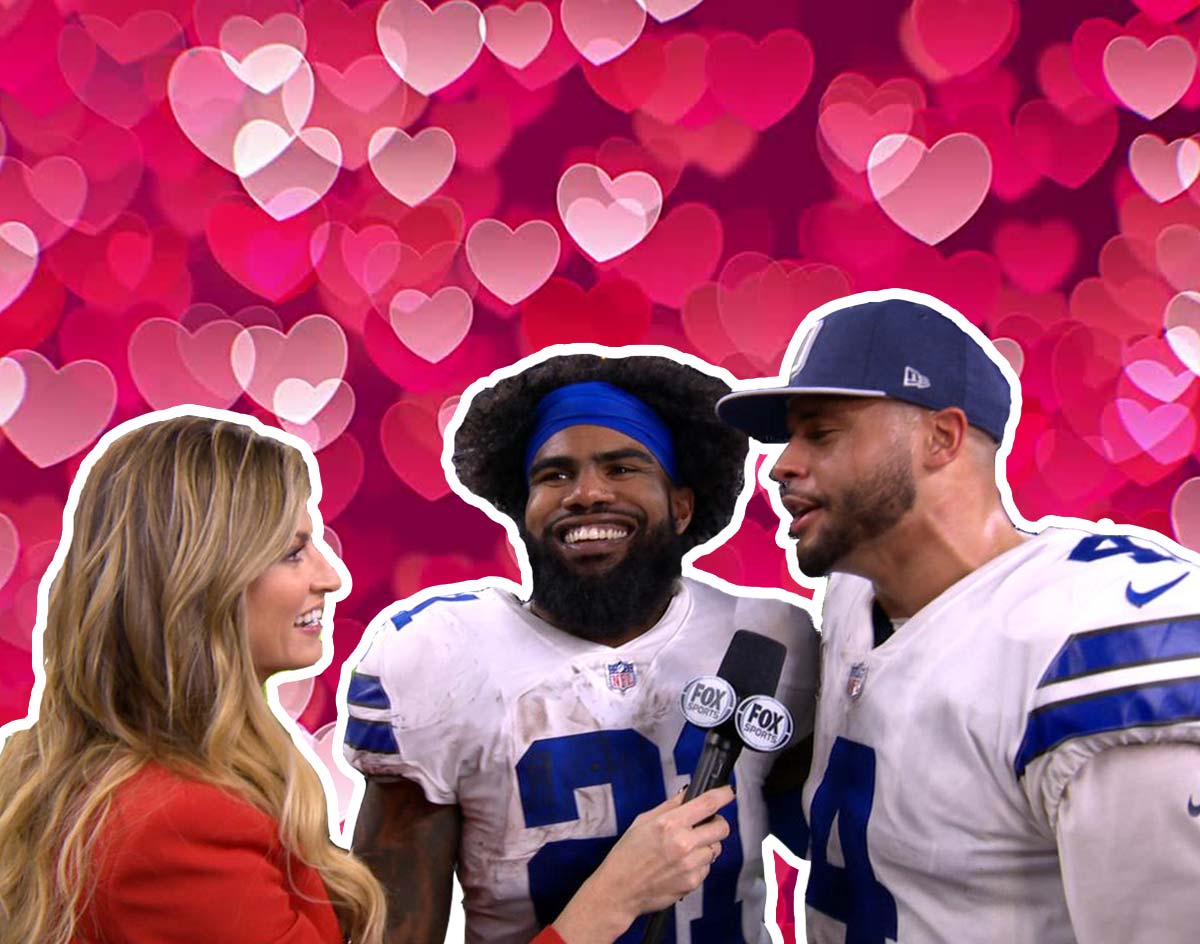 After Their First Playoff Win Together, The Cowboys’ Young Stars Said They Were Each Other’s Best Friends — Something They Have A Long History Of Doing.

Everyone’s been talking about a fun moment that came in the immediate aftermath of the Dallas Cowboys’ 24-22 playoff win over the Seattle Seahawks last weekend: In an on-field, post-game interview with FOX sideline reporter Erin Andrews, the team’s star backfield tandem of Dak Prescott and Ezekiel Elliott exchanged compliments about each other’s play, with Elliott, as widely reported, saying Prescott played like a “grown-ass man” in what was the first career NFL Playoff win for either player.

Less reported, though, was a just-as-fun incident that came only a few seconds later: Prescott, heaping praise back Elliott’s way, called the running back his best friend. The NFL’s leading rusher then smiled, faced his teammate and said “You’re mine!” in reply.

You can see that second moment for yourself about 55 seconds into the following clip:

Adorable as that moment was, it was hardly the first time the two have openly expressed an affection for one another. The Dak-Zeke friendship has been prominently on display since the two entered the professional ranks, really.

Still, in honor of this most recent example of their friendship being put on blast, let’s take a look back at some of the greater public moments from throughout the years in this pair’s ongoing bromance.

They Became Such Good Friends At The NFL Draft Combine That They Became Roommates After The Cowboys Selected Them Both.

In the players’ shared rookie campaign in 2016, an article in The Undefeated detailed the blossoming friendship between Dak and Zeke. In it, Zeke described their relationship as a healthy one built on “chemistry” and “mutual respect,” as Dak detailed how their kinship started when they met at the NFL Draft Combine and then grew once they were drafted together — so much so that the two were happy to become roommates during team hotel stays once on the team, and to even “hang out a good bit off the field.” A similar Fort Worth Star-Telegram article that ran around the same time featured various Cowboys teammates detailing how the fun spirit sparked by Dak and Zeke’s friendship had become an infectious throughout the locker room at large. A 2016 Dallas Morning News article on their connection, meanwhile, portrayed the two as a bit of a classic odd couple, with Zeke as the wild child and Dak as the more contemplative one — as evidenced by Elliott publicly ripping his roommate’s receding hairline and taste in television (America’s Got Talent, specifically), but somewhat shockingly not commenting on the quarterback’s questionable music taste.

They Wholly Embraced The Fact That Their Uniform Numbers Combined To Spell Out Dallas’ 214 Area Code, Even Referring To Their Friendship As The “214” Connection.

A later Dallas Morning News article from 2018 on the earliest days of the backfield-mates’ friendship would later add more details about their first interactions — like how the two actually met on the ride to the combine, and how Zeke used to take naps (and sometimes even accidentally leave his Cowboys paycheck behind) in Dak’s truck before he secured his own North Texas transportation. That piece also share that the two wholly embraced the fact that their combined 21 and 4 uniform numbers lined up with Dallas’ 214 area code — to the point that they even referred to themselves in tandem as “214.” Their friendship is so Dallas, in fact, that the two would even at one point hunker down and wait out a tornado warning together — the true sign of a tight North Texas bond, no doubt.

Zeke Bought Himself And Dak Expensive-Ass Matching Chains With Diamond-Encrusted Pendants For Christmas.

That “214” bit became cemented in their friendship lore when, amidst their rookie campaign, Elliott bought Prescott and himself a pretty baller Christmastime indulgence — matching chains with 14-carat white gold pendants bearing the “214” number, covered in some 10 carats worth of diamonds. There was one difference between the pieces: Zeke’s had a blue 21 and white 4, whereas Dak’s was colored the opposite way. According to reports, each pendant cost $5,000 in materials alone — and that’s before figuring the costs for design, manufacturing and so on. Damn.

They Physically Show Love For One Another And Even Went On Vacation Together To The Florida Keys.

Exchanging jewelry is just the start of these two publicly loving on each other. Over the course of their three seasons together so far, cameras have seen these two hug, kiss and — this is football — touch butts. Cameras also caught them bar-hopping and buying penis-shaped water guns while on vacation together in the Florida Keys, which, c’mon, is at least a little funny.

They Openly Call Each Other Their Best Friend In Interviews.

Increasingly, these two have since taken to the press to openly affirm one other’s place atop their respective friend rankings. Well, kinda: Previously Zeke had said that the two are “basically best friends” while Dak has gone so far as to describe Zeke as his “brother” and no-qualifier “best friend.” Far as we can tell, that Erin Andrews interview from last weekend was the first outright “best friend” distinction Zeke has publicly sent Dak’s way.

His true ace is Zeke. The above record clearly shows it.