56 Things To Do In Dallas This Weekend. 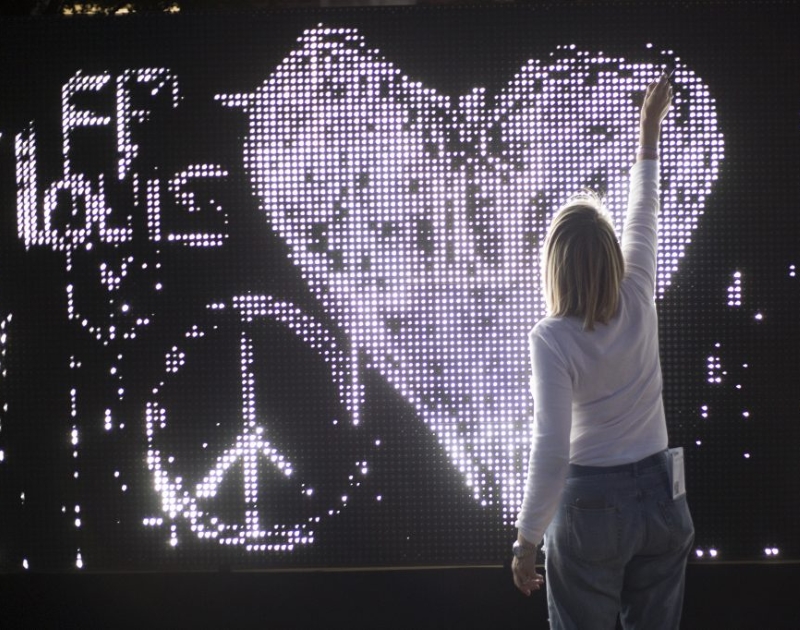 Celebrate Local Food Growers, Switch Christina Aguilera Chairs, Get on Your Bikes and Ride 20 Miles of Closed Dallas Streets, Look to the Future at Aurora and More.

Pro tip: if you buy your New Year’s Eve outfit right now, you can get it for hella-cheap. The catch is that you have to get it from a Halloween store. But who cares, you’re going to look fabulous, you’re totally going to stand out and we can guarantee nobody will show up rocking the same thing.

It always pays to plan ahead that way.

Likewise, looking ahead at all the rad haps going down the next few days is the best way not to be missing out on any of them. — Cory Graves

Lucero at The Rustic
Since their secret show at Dada back in May and opening turn for Frank Turner at House of Blues in June, the Memphis alt-rock forebearers released a dark and raw new album, their ninth over all. Dead Flowers opens. — CG

Chefs for Farmers: Fearings Dinners at The Ritz Carlton (Sold Out)
With this annual series of events, everyone’s a winner. That goes double for the folks that got tickets to this celebrity chef dinner — featuring Fearing, Norman Van Aken, Robert Del Grande and Wolfgang Puck — before they sold out. — CG

Ladies of LCD Soundsystem at It’ll Do Club
Dance yrself clean, as Nancy Whang and Gavin Rayna Russom celebrate not just their works with the “Losing My Edge” band, but their solo projects. — CG

Petit Biscuit at House of Blues
The classically-trained French artist has been appearing on the Billboard dance charts since age 15. He’s since amassed over 400 million streams for his catalog. — CG

MC Hammer at Lava Cantina
We won’t even dare touch this. — CG

Milo at Ruins
Contemporary poetry without a message, rapped for its own sake. — CG

GramFest at AllGood Cafe
Halloween time is meant for remembering the dead, say the owners of Deep Ellum’s longest running eatery. Specifically, they’ll try to conjure the ghost of California country pioneer Gram Parsons at this one. — CG

Back To The Future at Texas Theatre
Robert Zemeckis’ sci-fi classic is on cable, like, every damn day. So why see it here? The screening’s a promo for host and Dallas filmmaker Yen Tan, whose new film 1985 takes place in the same year Back To The Future was released. — CG

Ben & Noel Haggard at Billy Bob’s
Ben was a frequent player on pappa Merle’s albums and tours. He keeps the old man’s music alive, here, along with brother Noel and members of his old The Strangers backing outfit. — CG

Darwin Deez at Three Links
Nevermind that Darwin Deez looks like a character Fred Armisen would dream up for a Portlandia sketch. His music is loud, noisy, catchy and a little cutesy, making it fully capable of bringing down most any house. — H. Drew Blackburn

Ghostemane at Trees
The Florida hardcore punk-turned-rapper is starting to find some success beyond the underground. Bitter End opens. — CG

Legends of Hip-Hop at The Theatre at Grand Prairie
Not sure if “legends” is the exact right word to describe the motley crew of Juvenile, Scarface, 8Ball & MJG, Too $hort, DJ Quick and Bun B, but those suckers did have a ton of radio hits between them back in the day. — CG

Rusko at Stereo Live
Rusko is back. Get ready to wubwub your wubwubwub off. — Jessi Pereira

Duckwrth at Deep Ellum Art Co.
The San Antonio Current  describes the groundbreaking LA-based rapper’s motives best. So says they: “There are rappers who are trying to be rappers, and then there are artists who happen to have chosen hip-hop as a medium. Duckwrth is the latter.” —CG

Noah Kahan at Dada
The breakout indie songwriter has racked up over 69 million streams for his “Hurt Somebody” single on Spotify alone. Cory Harper opens. — CG

Sub-Sahara (EP Release) at Main At South Side
You never know quite what you’re going to get with the young Dallas post-punk trio Sub-Sahara. That’s because the band really enjoys flipping the script entirely from song to song — like this one, which we featured recently —  keeping folks like us on our toes. Even so, or perhaps as a result of this affinity for the unpredictable, the band’s mixtape-like albums and frenetic live shows have managed to strike a chord. Initially billed as an “angstier version of The Cure” — and, yes, they’ve even busted out a Cure cover set before — this trio isn’t one to be pinned down. Instead, the band bounces between noise rock, funk, hard-charging punk and rhythmic post-punk, among other sonic inspirations. — CG

Chefs for Farmers: Street Food Night Market at Victory Park
The global street food market is only available to those who buy tickets in advance through Prekindle. You’ve been warned. — CG

Festicle at Braindead Brewing
The fourth year of this Deep Ellum beer fest features not only its Hammer of the Gods, but its brewers’ favorite beers made by other breweries. — CG

She Wants Revenge at Trees
She Wants Revenge busted onto the scene with its moody, dark 2006 self-titled album. And though the group wasn’t able to capitalize on that success, a feature on American Horror Story a couple years ago led to a resurgence in the band’s popularity. And last year’s 10-year reunion tour was met with a warm response. So, Dallas, here they are again. Tessa Rae and SEVIT open. — Obed Manuel


Wynonna Judd at Arlington Music Hall
If you haven’t listened to Wynonna’s episode of the Cocaine and Rhinestones podcast, stop and do that immediately. Then have a better understanding why she’s here with her band the Big Noise rather than her mean ol’ mom. — CG

Dawes at The Bomb Factory
Dawes’ breakthrough single, “When My Time Comes” is easily one of the five best songs ever that reference that one Friedrich Nietzsche quote about abysses. But the Spune-centric sound of Dawes isn’t for everyone: “They should be call Blahs,” one of my friend said to me last time the band was in town. He’s not wrong, but still: My friends are assholes. — Pete Freedman

The Record Company at Granada Theater
Opening for the roots-rock trio is the critically adored Madisen Ward & the Mama Bear. — CG

Parker McCollum at Billy Bob’s
The twentysomething is the future of pop country — and that’ s a good thing. — CG

Mo Lowda & the Humble at Dada
For a brief period the alt-rock trio, formed by high school friends, dropped the Mo Lowda portion of its name. It seems they’ve brought it back. Quiet Company opens. — CG

Wings of Desire at Texas Theatre
The 1987 French-German romcom is the artier, original version of that Nic Cage City of Angels movie — y’know, the movie with that one Goo Goo Dolls song in it. It screens Sunday, too. — CG

The Bodeans at Kessler Theater
In the span of 30 years, the heartland and alt-rock band have released 12 studio albums, 10 of which made the Billboard 200. So, yeah, these fellas know how to churn out a tune. — Juan Betancourt


Time Warp Party at Double Wide
Let’s do it again — turn back the clocks for Daylight Savings, that is. It gives us an extra hour to enjoy performances from Cars and Weezer tributes and a Rocky Horror screening. — CG

AURORA 2018: “Future Worlds” at City Hall
The multifaceted, biennial public art expo will incorporate sights, sounds, lights and more to encourage visitors to imagine what the future may hold. — CG

Woman’s Harley Bar Race at Strokers
Get on your own bikes — not just Harley’s — and ride. It’s a race against the clock. — CG

Dallas Bike Ride at City Hall Plaza
Roam around the City of Dallas in this year edition of Dallas Bike Ride. You won’t have to worry about cars honking at you because it’s a car-free route. Yes, that’s right. An open 20-mile closed course with no cars. Grab your bike and start pedaling. Oh, and don’t forget your helmet! –– JB

Chefs for Farmers: The Main Event at Oak Lawn Park
Some 45 chefs, some of which are celebs, plus more 30 wineries, spirits and breweries are coming together to celebrate locally-sourced ingredients and the hard-working people who grow our food. — CG

All Them Witches at Dada
All Them Witches is a rock band from Nashville with a layered, ominous sound that the name of the band is meant to forebode. The songs are densely composed with no one clear genre influence in their music. The band is known for its lyrics as well, focusing on a narrative structure on songs that engross the listener into every facet of its music. — Paul Wedding

Laugh Your MASS Off w/ Patrick Sirois at Main At South Side
This bar-set comedy show is headlined by the Austin comic responsible for that viral Beto fan-fic Facebook post comparing him to the superior male dating your ex. Zac Brooks also performs. — CG

The Moors at Theatre Three
At first, we thought Jen Silverman’s new play was called The Moops, but then we realized it was definitely a typo, bubble boy. Continues its run this weekend, and going through November 18, the dark Victorian comedy is both whimsical and mysterious. — CG

Old Monk 20th Anniversary Party
Cheers to 20 years of Henderson Ave beers with a Smiths cover band and some Easy Slider in the parking lot. — CG

Backyard Story Night at The Wild Detectives
At five years and counting, this live storytelling show continues its long run. This month has no theme, so come one and all. — CG

G Herbo at Canton Hall
The 23-year-old Chicago rapper was a part of this year’s B.E.T.  Hip-Hop Awards cypher. — CG

Silent Planet at Deep Ellum Art Co.
How ’bout some Christian metalcore this Sunday. That counts as church, no? — CG

Denton Brew Bus Tour at Dot’s Hophouse
House this for a designated driver — a bus picks you up and drops you back off in Dallas, but drives you up to Denton for an East Side, Oak St Draft House, Bearded Monk and Celestial Beerworks crawl between. — CG