Did Forever 21 Rip Off This Dallas Designer’s Concept? 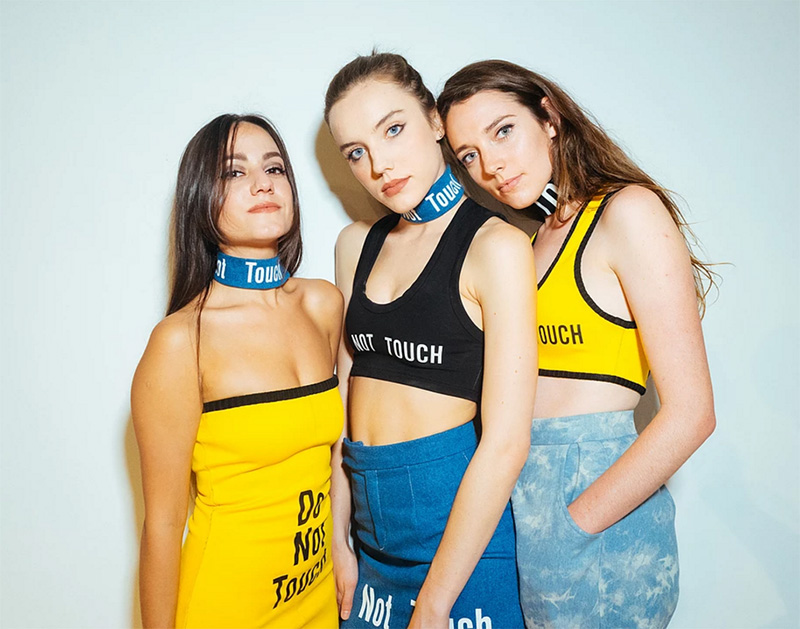 Dallas Fashion Designer Charles Smith II Accuses Forever 21 Of Ripping Off His “Do Not Touch” Collection’s Concept For New Bralette.

Three days ago, almost immediately after Instagram model Rosa Acosta posted to her 1.3 million followers a no-doubt-sponsored a video in which she applied a stretch mark cream to her well-defined abdomen, Dallas fashion designer Charles Smith II‘s own Instagram‘s message folder immediately started blowing up with congratulatory notes.

“It was from, like, totally random people,” Smith says this afternoon. “People I didn’t even know were hitting me in my DMs, telling me they saw the clip and congratulating me.”

The excitement centered around the fact that Acosta was wearing a bralette in the clip that bore the slogan “Do Not Touch,” just as is the case with most every piece in his 2016-debuted, soon-to-be-released collection of the same name.

I love working out and eating well but as women we all are prone to cellulite and stretch marks. @vannabelt reached out to offer me her products and I decided to give them a chance and I LOVE THEM! Nothing wrong with a little help!!! They help take your fitness game to the next level! Keep your curves looking smooth and tone with @vannabelt Ps: the gloves feels amazing ?

One problem: Although Smith’s collection indeed includes bralettes bearing those words, the bra Acosta was wearing was not his design. Rather, it was an offering from the national mall retail staple Forever 21.

Smith says he has no doubts about what happened. He alleges that someone at Forever 21 saw his concept and, as the company has done to a number of other designers over the years, borrowed it. And so, in a rant posted Sunday afternoon to his social accounts, Smith made his conviction known and publicly accused the company of stealing his idea.

I was going to keep silent about this and handle it legally but fuck that, @forever21 is a giant corporation that gets over on creating cheaply made designs made out of cheap ass Fabric that in a spin cycle of one wash is over before you even dry it. This fuck company ripped off a concept that I incepted January of 2016, as a designer I research every detail of design or concept that I plan to squeeze throughout the collections I create in variations, @donottouchs2 was was a simple idea that went untapped in both commercial & high fashion and I can honestly say and you can Google “Do Not Touch Fashions” and my shit pops up first. Do Not Touch has helped create scholarship funds for kids in a public school system that was built for them to fail and I created and came up with this collection not only to express but to create positive change through the platform I have in the little way that I can, so when giant companies such as @forever21 blantantly steal your ideas and not ask nor compensate you and let alone steal an idea that also belongs to the youth of our public schools, your not only taking money out of my families mouth but you are also taking dreams away from these kids and your taking money out of there pocket which goes to helping there transition into the next great phase of there lives. So @forever21 I know you think your untouchable you seriously have fucked with the wrong nigga, your lack of common decency shows you don’t respect young creatives who are trying to accomplish there dreams with our ideas, and sense you lack decency I also will do what I have to do to make you respect me and every other designer you have stolen ideas that you couldn’t incept on your own from. @vidakush @asherahswimwear @kimikouture let’s stand together and not let these giant companies or fake websites and IG profiles continue to theft our hard working ideas. #OurIdeasAreWorthSomething

“Of course all those people who messaged me on Instragram thought the design was mine,” Smith said when reached by phone this afternoon.

His argument is based on the fact that, while his collection is not yet available in full for the public to purchase — he says he is in the process of setting up his online store for the new collection to launch possibly as soon as later this week — the work has been visible since the late summer 2016 when he started to promote his fashion show formally debuting the line on October 3, 2016.

Furthermore, he argues that his line wasn’t exactly a secret, with its release having been covered by local Dallas media outlets, some of which centered around the fact that a portion of the sales surrounding his “Do Not Touch” line was meant to go toward a scholarship fund for students in the Dallas Independent School District who wish to pursue a career in the creative arts. (Although the entire collection is not yet up for sale, hats embroidered with the “Do Not Touch” slogan are currently available for purchase here, with 100 percent of those items’ proceeds going toward the scholarship fund.)

A promotional photo for Charles Smith II’s “Do Not Touch” line, courtesy of the designer.

“This doesn’t just happen to me,” Smith says. “This company does shit like this all the time, especially to emerging designers.”

The fact that they produce their items in bulk, Smith says, is what makes their alleged thievery especially nefarious. Whereas Smith’s “Do Not Touch” bra is handmade with a athletic poly neoprene fabric and retails for $280.00, Forever 21’s nylon, polyester and spandex blended bra retails for just $3.99. 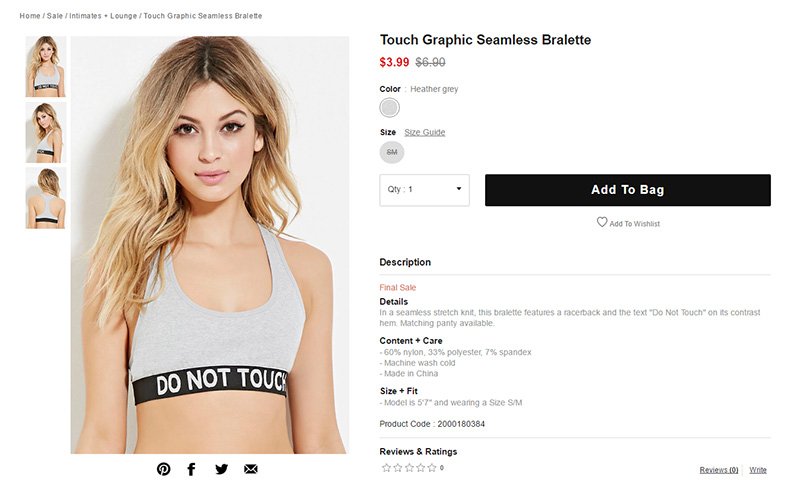 A screengrab of bralette for sale on the Forever 21 site.

For now, Smith is collecting a paper trail of his history with his “Do Not Touch” concept so he can prove that he was working on plans for the design since at least January 2016. He had already begun the process of trademarking his idea, he says. And he also says he has been in touch with legal counsel about how best to proceed.

“I knew when I came up with the idea that it was a good one,” Smith says. “I knew that it was something someone was going to try to copy. But, obviously, everything’s especially urgent right now.”

Well, for Smith, anyway. We’ve reached out to Forever 21 for comment on Smith’s accusation of theft, but have yet to hear back.

For his part, Smith’s not sure we will. And, for now at least, he’s fine with that.