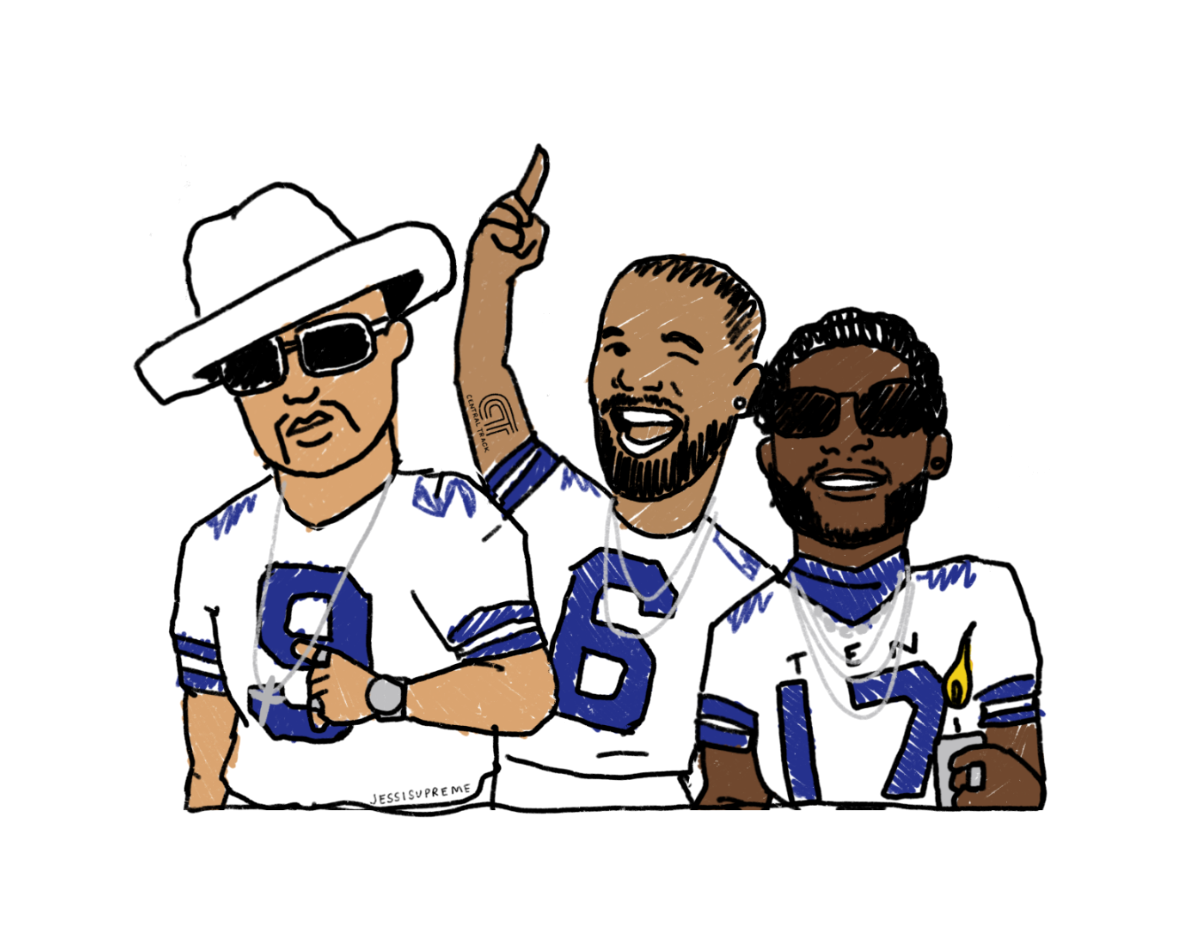 Sometimes All It Takes Is The Right Cosign From Rappers Who Aren’t Even From Here To Remind Us How Badass Living In Dallas Truly Is.

The most unequivocally fun part about rap is that it makes fantasy living possible for us common folk.

You might be listening to a song talk about monetary extravagance with only $3 in your bank account until the 15th day every month, but with the right song, that won’t stop you from feeling like you’re really whippin’ the Chevy like it was a foreign.

Admittedly, hearing Future say “I’m the one living lavish/Like I’m playing for the Mavericks” on “March Madness” was exciting to hear in the summer of 2015 when his acclaimed 56 Nights mixtape came out. It was four years after the Mavericks championship win and there was still so much lingering pride in the city. Our basketball team was at the forefront of the sports radar, and then one of top songs in the country tossed a big nod at our team. Nonetheless, even with championship trophies, it was still surprising to hear a rap star from Atlanta give a shout to Dallas on such a high-profile song.

But what Future did is not new. In fact, acknowledging Dallas is something that has been going on for years if you tap in and listen closely. This is especially clear if your mind resides at the corner of entrepreneurship and artistry, which is safe to say is the nucleus of the modern rap star.

Dallas is not a city to gloss over anymore, and the boom is not going away.

With southern rap music dominating global culture and influencing just about everyone (seriously, have you heard French trap music?), to be a rapper is to be the modern day rock star. Having them mention your hometown is the best kind of cosign — like, “Wait, you you’re talking to me? You know I exist?”


Rap music is perfect for any occasion, honestly.

Whatever the occasion may be, it’s always even more exciting to hear Dallas mentioned in a song. While there are dozens of songs that could’ve been profiled here (see our Songs About Dallas series), we felt compelled to call out a crop of five songs by artists not from Dallas.

“Glock just pulled up on me, talkin’ shit in the McLaren (hey)

Thirty thousand just for a sofa because the fabric (woo)”

Young Dolph doesn’t keep his love for Dallas a secret. Recently, the rapper made news when he drove down to Dallas to personally deliver his two-tone 2018 Lamborghini Aventador to super fan Jack Davila in the suburb of Grand Prairie. Not to mention, the rapper has recently been spotted in town shooting a music video with Dallas’ own Trapboy Freddy.

Now, whether Young Dolph has more, er, “fans” than the Mavericks is debatable. While asking the Mavericks to deliver Lamborghinis to our doorstep might be a stretch, we think just bringing home another championship trophy is just as good, if not better. Either works.

“Internalizing the business mechanics, big in that tactics

Got buildings in Cali, got ranches in Dallas, marijuana and cattle

We slinging it all, see it don’t matter, one stop shop”

Dallas is a land of monetary opportunities and diverse markets for just about anything you may need. So, it’s unsurprising that New Orleans’ stoner-rap favorite Curren$y would buy a ranch out here. For folks with a good business acumen — which Curren$y seems to be keen on — Dallas is the place to be. Sure, our attitude may be “all hat and no cattle” to other Texans, but you can’t deny we’re about our business here no matter what the product may be.

“In a three-story mansion, flew two bitches in from Dallas (Dallas)

They some bad bitches

Goddamn, I love it when they ratchet (ratchet)”

Enough about boring business talk. It’s time to have some fun.

If we were selling out the American Airlines Center like Lil Pump, we’d want to have some fun too. And we sure do a lot of that here, but if you know anything about the mechanics between a good group and a good time, then you know there’s always a few “ratchets” in the mix.

For sure, the term “ratchet” over the years has evolved and by no means limited to describing a physical look. Ratchet is also an attitude — a spirit.

Sometimes you don’t want to just sit down at the bar at Nick & Sam’s. It’s Saturday after 8 p.m. and the DJ is actually playing good rap music, and y’know what? You want to throw cheeks in the corner booth and do your best not to spill mussel sauce on your white dress. This is not to say this was done from first-hand experience by the author of this article, of course; it’s just not farfetched to imagine that Lil Pump could be referencing something like that. It’s fun to get ratchet in Dallas.

“Yeah, Gucci the man, cash in the caddy

I just woke up in a palace

I did a walk through, I’m in Dallas, man”

Dallas is known for having its fair share of ostentatious homes and cinematic architecture. To be fair, Gucci Mane could’ve really woken up anywhere. Maybe he woke up inside of Medieval Times.

The more likely scenario, though, could be that Gucci Mane was shooting a music video with Mr. Boomtown, a Port Arthur-born college athlete turned filmmaker who lived in Dallas for some time. The video director is credited with directing videos for other Texas heavy hitters like Z-Ro and UGK, and even working for the Dallas Cowboys alongside Jerry Jones.

Mr. Boomtown likely shot your favorite MySpace-era rap video. The music video for “Bricks” by Gucci Mane that featured a very young Yo Gotti, Nicki Minaj and OJ da Juiceman? That was him. (Yes, the song from a viral video of a couple walking out to at their wedding.)

Or, there’s the alternative fantasy: Gucci Mane woke up in some random house in Highland Park, strolled along to Highland Park Village to get coffee and luxury candles, when suddenly someone outside of The Conservatory asks him what he does for a living.

“And Baby, he wanted her, so I just swung her

Next time I’m in Dallas, I’ll look for another

Though Lil Baby and Gunna hail from Atlanta and College Park, respectively, we went ahead and gave credit to Toronto, Canada as it was rap’s sad boy and noted Triple D cheerleader Drake, who threw us another nice shout out. What do you expect from a guy that loves to wake up in Dallas and freestyle about it?

In the off chance you’re illiterate when it comes to rap lyrics, within the first line, Drake is acknowledging that Lil Baby had his eyes set on a woman that was likely eyeballing Drake in the first place initially. However, being a good wingman, Drake “swings” over his potential lady friend to Lil Baby, adding that he could easily find another lady friend next time he’s in Dallas. Which should not be hard at all considering we do have very beautiful women here of all shapes, sizes, colors and creeds.

The last line serves as a reminder for us to persevere ahead in order to not fall off our track.

C’mon, it says it right there in the lyrics.

There are many old blues songs about Deep Ellum that we treasure as a part of our city’s rich musical history. However, it’s rare that you ever hear more semi-modern rap songs get specific about this Dallas neighborhood, much less legendary southern rappers like the celebrated Underground Kings.

It’s not unreasonable, though. The impactful southern rap duo was known for having their hands on just about every nook in cranny of music over Texas and the south as a whole. Some of UGK’s songs were even recorded right here at The Kitchen Studios in east Dallas, which boasts recording records for names like Erykah Badu, Pimp C, Betty Wright, Sam Lao and Blue, the Misfit.

In a genre where extravagance and bombast are just some of the elements that make it fun, its unsurprising that it aligns so well with a city like Dallas. Admittedly, no matter where you come from or where you stand on it, it does feel pretty damn good to live what rappers talk about in our everyday lives without ever even trying.