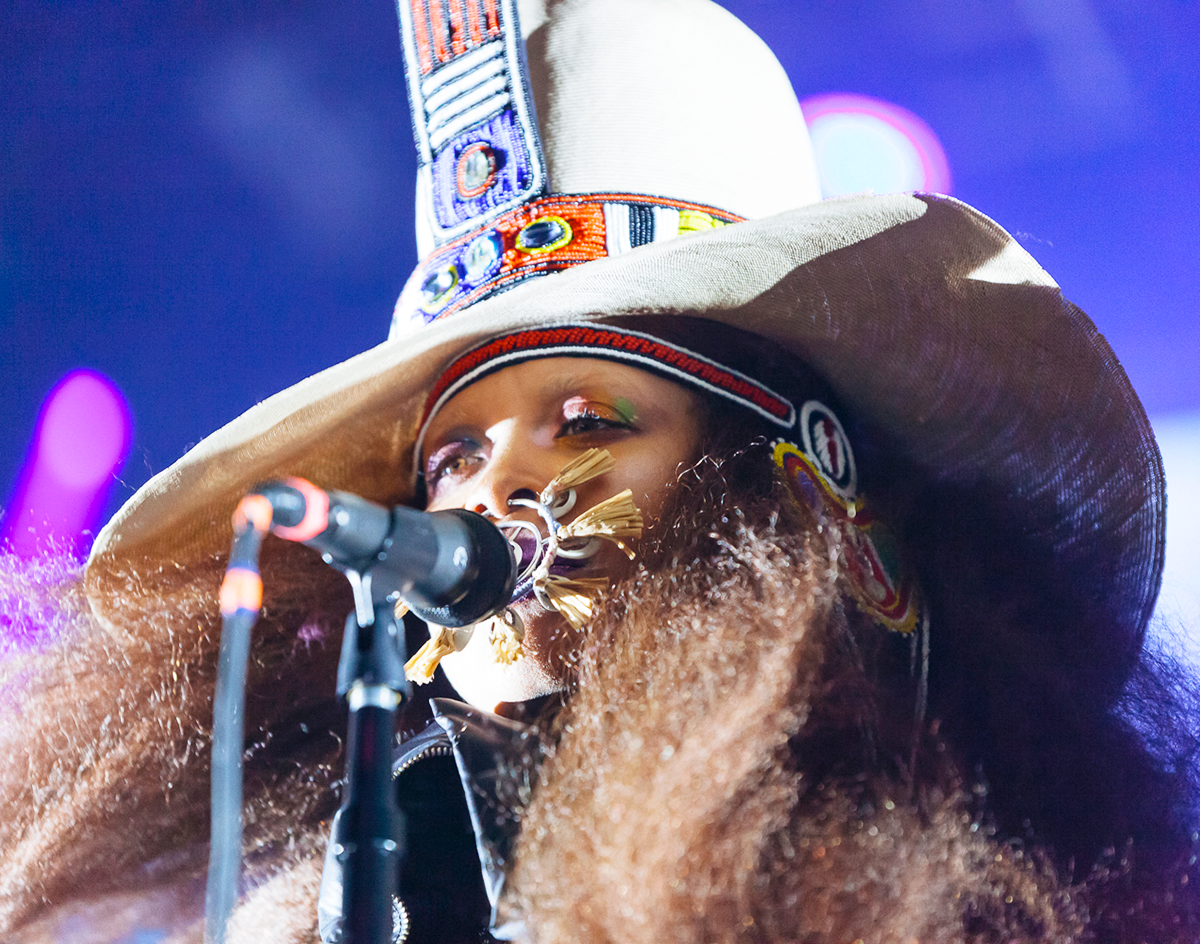 Help Erykah Badu Blow Out The Candles, Let Rex Orange County Be Your Best Friend And Be A Cool Kid With Echosmith. Plus More!

The early bird catches the worm, and the early voter catches the opportunity to keep our decaying democracy on life support just a little longer. That’s how the saying goes, right?

Early voting for the March 3 Texas primary elections began on Tuesday, February 18, and will last until Friday, February 28.

This upcoming weekend will be the only Saturday and Sunday when Texans can vote early, and candidates for the Democratic primaries are planning accordingly, with Bernie Sanders filling the Mesquite Rodeo to capacity on Valentine’s Day alongside local alt-country favorites The Vandoliers.

As much attention as the presidential race has received, it’s not the only important election on the ballot. Several candidates are vying to unseat Trump’s “biggest ally”, John Cornyn, in the U.S. Senate. Additionally, all 36 U.S. House districts in Texas are up for election; fortunately, you don’t have to keep track of 36 districts worth of nominees — just those of your home district.

You can use the Vote411 site by The League of Women Voters to check your voter registration status, see what elections you’re able to vote in, and even compare the political positions of different candidates.

As if that wasn’t convenient enough, Three Links will be partnering with Headcount Dallas to offer free rides to the closest polling location on Saturday, February 22. Whether you get to the polls that way, via the DART, your own car, or even those lame scooters if you have to, just seize the opportunity to make your voice heard.

And because we know elections can be overwhelming, we put together a list of everything happening in DFW for your non-partisan pleasure this weekend. — Daniel Valdez

Reverend Horton Heat at House of Blues
This legendary psychobilly outfit needs no introduction at this point, but long story short, they’re hometown heroes, and they owe their existence to the Cramps. — GG

Iyla at House of Blues
Iyla has made a few evolutions since her jump into music. Having started in all-female teen-pop trio Fine Chynah in 2011 she garnered considerable attention on YouTube, but the group quickly lost traction by 2012. Reinventing herself once again, Iyla now creates R&B/soul music often compared to the likes of H.E.R and Adele. — Mason Geear

Jauz at South Side Ballroom
The idea of creating a dance-house remix to the already nightmarish Baby Shark was bound to come to light at some point. Does that make it a good idea? Absolutely not. Unfortnately, Jauz was given infamous status after this. — MG

Have Mercy at Club Dada
This is be the Baltimore pop-punk outfit’s farewell tour. — GG

The Iron Maidens at Trees
These rockstar gals have been around since 2001 and claim to be the only all-female Iron Maiden trobute band in the world. — Natalie Bermudez

The Joe Kay Experience at Canton Hall
The DJ behind the EDM tastemaker label Soulection is bringing four hours of R&B and dance tunes to Dallas. — MG

DEx Film Screening IV: Mock Up on Mu by Craig Baldwin at Top Ten Records
“Cloverfield” wasn’t the only found-footage sci-fi film of 2008! Bay Area filmmaker Craig Baldwin presented a much weirder vision in his art film “Mock Up On Mu,” which the DFW Experimental Film Society is presenting at this show. — DV

Borgore at Stereo Live
Known for his dubstep smash “Decisions” with Miley Cyrus, Borgore has been a polarizing name in the EDM scene due to his tendancy to go against typical dubstep nuances to create a dirtier, more trap influced style. Cyrus isn’t the only Disney star-turned-wild child Borgore has worked with, either. His song “Salad Dressing” features Bella Throne in a strange, sexual food fantasy. — MG

Standards at Rubber Gloves
On the Facebook page for this Los Angeles math-rock project, the “About” section reads “math rock Wiggles.” Fortunately, the frenetic instrumental jams of Standards are much more palatable than a cover of “Fruit Salad Yummy Yummy” in 11/8 time. — DV

Crobot at Gas Monkey Bar N’ Grill
Queens of the Stone Age and Soundgarden get into a bar fight in a dingy Pennsylvania pub, this band ensues. — DV

No Coast Fest at Division Brewing
Forget East Coast vs. West Coast — opt out entirely at this self-described “Anti-Fest” devoted to noise-rock. A few of the local acts who will be setting amplifiers ablaze over the festival’s two nights include Wax Ruins, Hoaries and The Last Great American Rock Band. — DV

Ticketstock at Plano Event Center
However, if you’re more into sports than scuzzy noise-rock, this other two-day festival might be more your speed. The DJs at the sports station The Ticket 96.7 FM will be sharing behind-the-scenes stories and inviting two Dallas sports icons to hang out: Dallas Cowboys legend Emmitt Smith and current Dallas Stars center Tyler Seguin. — DV

Late Nights: Chemistry at Dallas Museum of Art
Chemistry of both the romantic and scientific varieties is being celebrated by the Dallas Museum of Art at its latest late-night event. Jazz artists like Breggett Rideau and Damon K. Clark will illustrate the chemical process of erosion by melting listeners’ hearts with their lovesick tunes. For those feeling less lovey-dovey, the museum’s paintings conservator will hold a presentation about how scientific concepts help museums preserve works of art. — DV

Thrice + mewithoutYou at House of Blues
We’ve said before that mewithoutyou has an unofficial residency in Dallas on account of the fact that they come through here all the damn time. Well, they proved us right. — GG

Tones and I at Canton Hall
This show was originally booked for the smaller venue Club Dada off the success of “Dance Monkey,” but then said “Monkey” became a King Kong sized hit and cracked the top 10 stateside. — DV

Colony House at Granada Theater
This alt-rock band is more on the pop spectrum a la Young The Giant. What’s been impressive about this band though, was its ability to tour for multiple years with no new music releases and still remain somewhat mainstream. Now its back with a new album to refresh fans who’ve been waiting to see them live again. — MG

CBDB + Kendall Street Company at Three Links
Progressive rock-n-rollers CBDB are on tour repping its 2018 record Out of Line. — MG

Harlem Globetrotters at American Airlines Center
Yes, the guys who do trick shots and spin basketballs on their fingers. — NJB

Love You: A Badu Bday Dance Party at The Bomb Factory
You know the drill. — GG

Alan Jackson at Dickies Arena
A country legend that’s career spans over 30 years, its a surprise that this guy is much more reserved in person than his music and performance history implies. Jackson also represents so many different country sub-genres such as bluegrass, honky-tonk, cajun, and gospel, so there will be a something for every country lover at this show. — MG

Mardi Paws at Toyota Music Factory
This event involves puppies dressing up in Carnival costumes for Mardi Gras. Would you believe that it’s also free? — NJB

Andrew Rivers at Deep Ellum Art Co.
Comedian Andrew Rivers has a massive resume of television appearances, live stand-up shows, and a Facebook series that should speak for his popularity and work ethic. He was also featured on the hilarious YouTube show Truth or Drink that deserves a watch regardless of whether you go to this show. — MG

Tiësto at Stereo Live
With over 22 million monthly listeners on Spotify, Tiësto is one of the best selling and best paid DJs in the world.  He’s also known as one of the founding fathers of trance music, but has evolved into a much more radio friendly sound in the past decade. His song “Jackie Chan” features our own hometown hero Post Malone, and topped various genre charts on Billboard. — MG

Rebel Yell at Gas Monkey Bar N’ Grill
A night of tribute bands, as Rebel Yell and Sonic Temple cover the music of Billy Idol and The Cult, respectively. If you were looking for an excuse to pull the dusty old studded leather jacket out of the closet this is the night to do so. – MG

Some Rap Show, Vol. 1 at Rubber Gloves
Rubber Gloves doesn’t book rap shows as often as we’d like, so this great lineup of local rap talent should be taken advantage of. — Alec Spicer

Sade Vs. Badu at Deep Ellum Art Co.
Instead of pitting two bad bitches against each other, this night of bulletproof soul is putting them together. — AS

The Princess Bride at Majestic Theatre
Make it a fairytale night at this special screening for the 1987 classic and the one movie people are always when you tell them you’ve never seen it. — AS

Lush – Oak Cliff at Texas Theatre
A dance party with a cause, Lush will feature a line-up of DJs from all over Texas. From cumbia and reggaeton, to dancehall music, there’s a little funk for everyone. Proceeds from the tickets will go to RAICES, an organization focused on reuniting families separated on the border. — NB

Old 97’s at Billy Bob’s
You should take every chance you can get to catch this iconic, Dallas-based alt-country band live. — AS

Deep Ellum Goes To The Polls at Three Links
Three Links is partnering with Headcount Dallas for free (!!) rides to the polls on the only Saturday of early voting for the 2020 primary election. Easy Slider will also be on hand for bites as you cram some last minute studying on the candidates. — Alec Spicer

Pinegrove at Trees
I booked Pinegrove at Rubber Gloves back in March 2016, and in trying to get a guarantee arranged, the agent told me, “They’re going to explode.” He was right — they did get big. Although it eventually got “cancelled” at the height of the #MeToo movement, the band has continued to clumsily climb the ladder. — GG

Young Dolph + Key Glock at South Side Ballroom
The former is a Memphis rapper who has been in the game since 2008. The latter, also from Memphis, is a protégé of the former. Imagine that. — GG

Lower Dens at Ruins
Fresh from a tour with Of Monsters and Men, the indie-pop outfit makes a long-awaited return to the Metroplex. By the way, the band’s vocalist Jana Hunter was raised in Arlington. — GG

Echosmith at Granada Theater
Echosmith aren’t the “Cool Kids” of alt-rock radio anymore, but these pop wunderkinds still have a large enough following to play venues the size of the Granada Theater. — DV

070 Shake at HOB
Kanye West’s Ye album was polarizing, to say the absolute least, but one of the few undeniable bright spots was this R&B songwriter’s vocal turn on “Ghost Town.” Now she’s taking center-stage with her hip-hop infused takes on mental health and queer relationships. — DV

Om at Gas Monkey Bar N’ Grill
Om is the side-project of Sleep bassist Al Cisneros, who, fun fact, allegedly snorted lines of coke off one of his amps during a 2013 show at Rubber Gloves, then got into a heated confrontation with the then-owner after refusing to leave past the venue’s close. — GG

The Aggrolites at Three Links
Two bands became one when The Vessels and The Rhythm Doctors linked up to form this super-ska band. — NJB

Fishboy at Dan’s Silverleaf
Fishboy is an indie-pop band that creates art not just musically, but its comic series’ that go along with each album as well. Band founder Eric Michener has a love for comic book art and uses his creations as a way to storyboard for his albums and vice versa. The two are seemingly interconnected, much like the bands songs — each album tells an entire story, with each song being a different plot point. — MG

Strong Work at Rubber Gloves
A night of funky beats and “some drunken improv.” The band will be joined by DPC, Radio Wore and Peyote Peasants. — MG

Mardi Gras Oak Cliff Parade
Can’t go to New Orleans for Mardi Gras? Let it come to you in the heart of Bishop Arts. — AS