45 Things To Do In Dallas This Weekend. 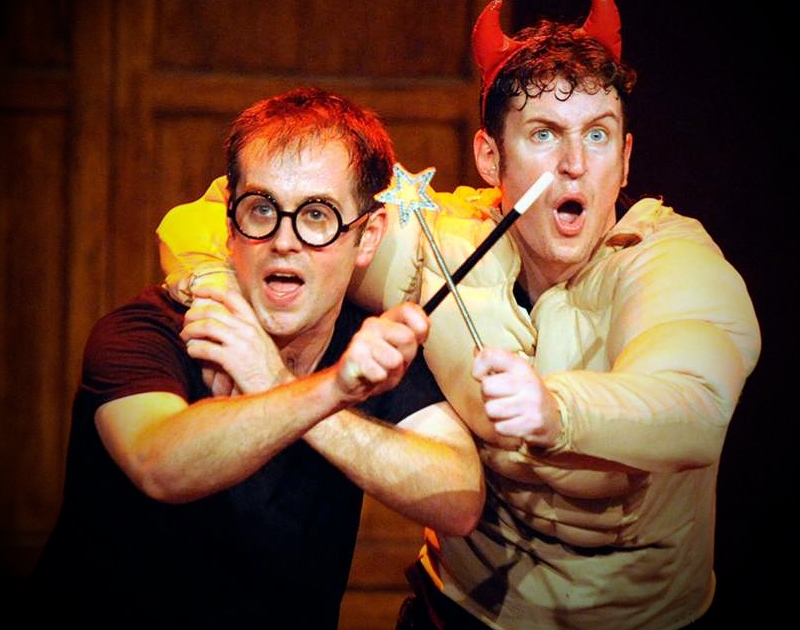 Enjoy Some Holiday Tunes, Make Up a Movie on the Spot, Pair Your Cheesecake Flight With Local Beers, Make Fun of the Harry Potter Movies and More.

An 87-year-old man from Spain is currently building a 60-foot spaceship on his property.

His name is Lucio Ballesteros, and he’s a writer, a musician, and a YouTuber who wants to visit the fictional planet from his own novels.

FROM HIS OWN NOVELS, PEOPLE. HELLO?!?!

He’s spent over 100,000 Euros so far on the spacecraft, and he doesn’t plan on stopping any time soon: “I do not want to leave this world without it being done. Because anyone can write, but showing what has been written cannot be done for everyone.”

Listen y’all, if an 87-year-old man can do the tiresome work of building his own craft to visit an imaginary planet, you can definitely suck it up and visit your in-laws for Christmas.

But don’t pack up and leave before checking out the below activities to do in Dallas! — Claire Lin

The Price is Right Live at The Theatre at Grand Prairie
Come on Down! — CL

Dallas Symphony Christmas Pops at Meyerson Symphony Center
Don’t worry if you can’t make it tonight because this event is going on until the 16th! — CL

Perfect Blue at Inwood Theatre
It’s the 20th anniversary of this psychological thriller. Be one of the first to see this brand new digital transfer. — CL

Kurt Vile at Canton Hall
Following last year’s collaborative LP with Courtney Barnett, the former lead guitarist of The War on Drugs is back with a meditatively psychedelic solo album, Bottle It In. — CL

Potted Potter at Texas Theatre
Having nothing to do with pottery making, this is actually a parody-comedy by two guys who condense all bloody seven Harry Potter books into 70 bloody minutes of bloody laughter. It starts a run in Oak Cliff today and continues through the 29th. — CL

Tom Waits Tribute at Double Wide
PSA: Tom Waits is not dead. Although this past month, there was a whole clusterfuck on Twitter regarding false celebrity deaths, Tom Waits included. This tribute by an all-star cast of local musicians will simply celebrate his life. — CL

Ryan Bingham: An Intimate Evening of Songs & Stories at Kessler Theater
Not that kind of intimate, ladies! Ryan Bingham will be singing acoustic and sharing some of the stories behind his songs. — CL

Martina McBride: Joy of Christmas at Majestic Theatre
This one’s for the girls. — CG

Penny and Sparrow at Granada Theater
The folk duo’s “Christmas Boogie” show is being billed as a sing-along game show. — CG

Andrew Combs at Ruins
Last year, Justin Townes Earle made news with some incendiary comments about which type of Nashvillian was responsible for ruining country music. Said Earle: “The problem that’s happening now is Nashville has become so disconnected with its past. And there are people there now who have an active disdain for Nashville’s past. They don’t want it there and want to see it gone… I wouldn’t chalk it up to hipsters. I’d chalk it up to blow-dried douchebags from elsewhere who come in to tell everyone else how they should do things. It’s not the kids in floppy hats who are messing up country music, it’s those douchebags.” But Dallas-raised Nashville import Andrew Combs isn’t one of those douchebags he was referring to. Produced by folks that previously worked on Earle’s own records, Combs’ most recent LP for his New West label is just good, honest singer-songwriting. A solid effort from top to bottom, it couldn’t ruin a genre if it tried. — CG

Bernhoft & the Fashion Bruises at Dada
Oslo in the summertime — the streets are strangely quiet ’cause everyone’s away on holiday. Like this Grammy-nominated singer who is using his to play songs in Dallas. Moorea Masa & the Mood opens. — CG

The Mother Hips at Dan’s Silverleaf
The Mother Hips have spent time on the same labels as Tom Petty, the Black Crowes and Johnny Cash, which is fitting because this Bay Area outfit makes a pretty earthy brand of pop-oriented bar rock itself. Good thing they ditched the idea of being just a Led Zeppelin and Jane’s Addiction cover band. — Chase Whale

Gin Blossoms at Lava Cantina
Whispers at the bus stop? Na, you found out about this show online. C’mon, it’s 2018. — CG


Valentino Khan, Krane, Cray at Stereo Live
The rave stalwarts will be lording over this dance party. — CG

The Wrecks at 2513 Deep Ellum
The kind of indie-rockers that can make Nazi jokes on stage and then just brush them off the next day. But can you? Should you? Deal Casino and Recent Rumors open. — CG

The Helio Sequence at Legacy Hall
The American Indie-Rock duo from Oregon is currently celebrating their re-issue of their landmark album, Keep Your Eyes Ahead, for its 10th anniversary. — CL

Joy Williams at Kessler Theater
From the four-time award-winning duo, The Civil Wars, Joy Williams is out with her upcoming solo album, Front Porch. — CL

Brian Regan at Toyota Music Factory
As a stand-up comedian, he uses a lot of sarcasm and self-deprecating humor, but admirably stays away from profanity and off-color jokes. His shows are clean for the parentals. — CL

Born Ruffians at Three Links
On one hand the publicist for Canadian indie outfit Born Ruffians describes the band’s material as “tightly wound, trapezoidal songs frothing over with hooks and wryly cathartic lyrics.” On the other hand, just about everybody compares these guys to acts like Talking Heads, The Pixies, Bowie and The Strokes. Make of that what you will. — CG

Anderson East at The Rustic
Like most shows at the Uptown joint, this one’s free. Unlike many, this one requires an RSVP to ensure admission. Hit the link above. And head’s up, the outdoor satellite bars are cash-only. — CG

Twista at Lola’s Trailer Park
The fastest rapper in the world is here to crush some bones – which should be no problem given how far the game has fallen in the hands of today’s meme/mumble rappers. — CG

The Improvised Christmas Movie at Dallas Comedy House
Piggybacking on the success of its made-up-on-the-spot, trope-filled horror movie offering during the Halloween season is this Christmas-themed production. Lord knows that’s a genre with plenty of cliches of its own. — CG

Nina Las Vegas at SiSu Uptown Resort
Toilet water may spin the opposite way where this Aussie radio host and DJ is from, but records spin clockwise everywhere. Music is global. — CG

Shop With Serena at Neighborhood Goods
The world’s most famous tennis player is in town to hawk her Serena brand of athliesure. — CG

Amy Sedaris Kovacs Awards thing at Alamo Richardson
During the 31st annual Dallas VideoFest this weekend, the Strangers With Candy actress will become the first female recipient of the coveted acting award. — CG

Cheesecake and Beer Pairing at L.U.C.K.
The handcrafted cheesecakes will be paired with four special North Texas brews including: Plain, Chocolate, Key lime, and Strawberry. Need we say more? — CL

Metalachi at Trees
Going off the rails on un tren loco. — CG

H.E.R. at The Bomb Factory
One half of the French neo-soul outfit lost a battle with cancer last summer. The other half is pressing on as a solo project meant to honor the other’s legacy. Bri Steves and Tone Stith open. — CG

The Oh Hellos at Granada Theater
https://www.centraltrack.com/things-to-do-this-weekend-205/Indie in the truest sense of the word, brother-sister San Marcos indie folk duo have landed placements on plenty of television shows and been invited onto plenty of festival bills all on their own. They’re even able to headline one of the bigger rooms in town. — CG

John Butler Trio at House of Blues
The Australian roots trio dabbles ever so slightly into the world of electronica. Thanks iPads! — CG

Ayokay at Three Links
One of those DJ/producer acts that relies on lots of pre-recorded samples to pull off his material live. The actually pretty great Denton R&B performer Troy Garrick opens. — CG

Rockefeller Christmas at Majestic Theatre
You don’t have to fly to New York to catch those famous high-kicks, just let the Radio City vibes come to you. — CG

Krampus Nacht 2 at The Church
Even the so-called bad kids have a heart. When Krampus comes to give these folks the what for, he’ll find a big ol’ bag of toys. What we’re trying to say is that this goth party is also a toy drive. — CG

BMW Dallas Marathon at Dallas City Hall
Guessing if you’re entering this thing, you’ve probably been training for some time now, and are well aware of its existence. I guess what I’m saying is this announcement is for everyone else, to serve as a reminder that there’s going to be some road closures and whatnot. — CG