43 Things To Do In Dallas This Weekend. 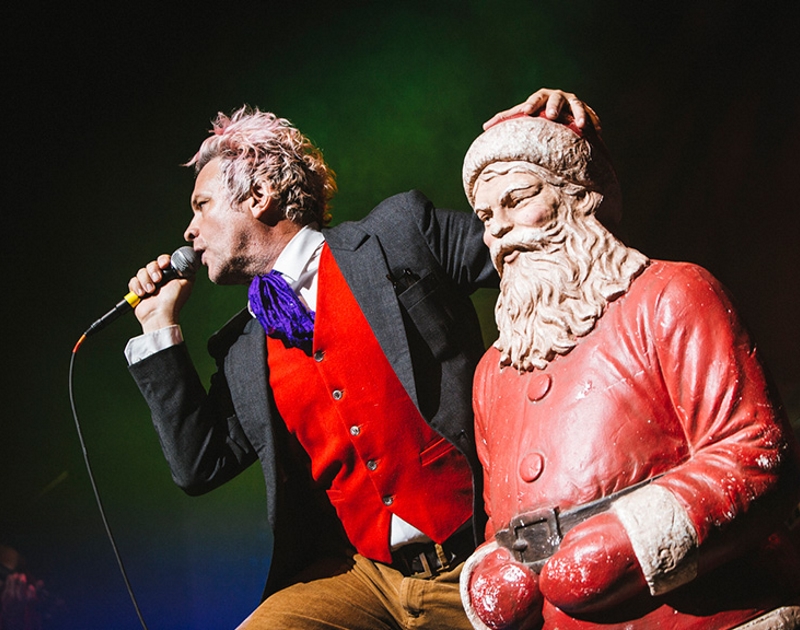 Christmas Party All Over Town, Holiday Extravagantly With the Polyphonic Spree, Welcome a Selfie Trap Back to Town, Art Show With Your Homegirls and More.

If you’re looking for something to do these next few days, might we recommend not defiling the ancient grave sites of our ancestors by stripping nude and posing for sexual portraits. Egyptian Authorities are currently looking for a couple that went viral after allegedly miming a sex act on top of one of the Great Pyramids.

Instead, might we suggest you do select something from the list below, where all items have been pre-approved to not offend any spirits. — Cory Graves

Fear at Curtain Club
Legendary hardcore punk outfit Fear reunited earlier this year after a brief hiatus and have enlisted Geoff Kresge (ex-AFI) as bassist (a position previously filled by Flea before he joined the Red Hot Chili Peppers.) If vocalist Lee Ving’s famously right wing political views are no impediment for you, and you enjoy being in the presence of punk legends, this show is worthy of your attention. — Garrett Gravley

Monty Python and the Holy Grail at Inwood Theatre
The farse that taught us the airspeed of an unladen swallow is about 24 miler per hour or 11 meters per second. — CG

Snails at South Side Ballroom
The French-Canadian artist is a “vomitstep” DJ, which I think is like dubstep but turned to 11. — CG


Sober’s Holiday Pop-Up at Jefferson Tower
Sobes and Leon Bridges are teaming up for another dance party, this one doubling as a toy drive. — CG

Nite Jewel at Dada
In 2016, Ramona Gonzalez left her label Secretly Canadian following what she cited as creative differences under her Nite Jewel project. Since then, she started her own label, Gloriette, and released two albums with complete creative autonomy. The result was an abandonment of a more cliched electronic sound in favor of one that infused Janet Jackson-esque R&B elements with her signature brand of Ariel Pink-influenced lo-fi pop. The Los Angeles-based artist returns to Dallas this wknd as part of Parade of Flesh’s Holidaze weekend. — GG

Mad Men Christmas Party at Sons of Hermann Hall (Sold Out)
This Xmas party takes place in a building that would have been old even in Don Draper’s day. Your attire should be similarly vintage chic. — CG

Electric Feels: Indie Rock + Indie Dance Night at 2513 Deep Ellum
Like the recurring emo nights at this venue, Electric Feels is another Los Angeles based recurring dance party deciding to expand to Dallas. Expect a heavy dose of Phoenix, The Killers, etc. at this one. The first 50 folks in line get in for free. — CG

Psychedelic Robot at Bivins Gallery
The Instagram trap, er, um, immersive pop-up is back for a brief extended run this weekend and next. — CG

Brian Wilson: The Christmas Album Live at Majestic Theatre
Wilson and fellow ex-Beach Boys Al Jardine and Blondie Chaplin are doing his holiday album in-full. It’ll be loads less Trump-y than when Mike Love and whatever passes as The Beach Boys these days hits the same venue in a few months. — CG

KSHMR at Stereo Live
One of the world’s top DJs brings his “The Giant Tour” to Dallas. — CG

Annual Dallasite Christmas Party
One of the dive-iest bars and low-key best karaoke spots in town throws its annual Christmas party with all bartending hands on deck. — CG

A Way With Words at Texas Theatre
Martha and Grant uncover the fascinating origins of everyday slang and idioms we often take for granted at this live taping of their popular NPR program. — CG

George Lopez at The Theatre at Grand Prairie
Now that he’s off the hook for choking a member of the red hat brigade, he can go back to making dad-friendly comedy good again. — CG

Bruce Robison & Kelly Willis: Holiday Shindig at Kessler Theater
Charlie Robison gets New Year’s Day, but his brother and sister-in-law have ownership of Christmas with this annual concert. There’ll be an early and a late show. — CG

Jamie Lin Wilson at Hank’s Texas Grill
Known for singing backup on the latest Turnpike Troubadours album, and at their recent Austin City Limits taping, the Texas singer-songwriter has a pretty spectacular recent solo album of her own out, full of brilliant, heart-tugging imagery. She plays this solo show in between dates with those Oklahoma boys. — CG

Jeremy Piven at Hyena’s (Dallas)
Now black-balled by Hollywood, stand-up is one of the Entourage actor’s few remaining outlets to stay in the spotlight. He’ll hit all three area Hyena’s locations this weekend. — CG

Black Pistol Fire at Trees
The Canadian rock duo behind such epic concert shots as this are back to do some more cool rock jumps. — CG

Hayes Carll, Robert Ellis at The Statler Ballroom
The drunken Texas poet and the Texas Piano Man (aka Southern Liberace) join forces for a night of great songwriting. — CG

Third Annual Naughty or Nice Greenville Ave Bar Crawl (Sold Out)
It’s too late to get wristbands for this one, just letting you know that from 12 to 6 p.m. Lower Greenville will be unnavigable. — CG

“Homegirls” Art Show at the New Sour Grapes Studio
Featuring the works of a whole bunch of rad local female artists, this one also doubles as a chance to check out the Grapes’ newest digs at 1300 South Polk  in Dallas. — CG

Jerry Seinfeld at WinStar World Casino and Resort (Sold Out)
What’s the deal with all these Seinfeld stand-up shows selling out before we hear about them? — CG

The Holiday Party at Blue Light Dallas
Prekindle’s annual holiday throwdown moves from Dada, where it has been held the last few years, to Deep Ellum’s newest country bar. The on-brand Dirty River Boys perform, as do a whole slew of non-country acts like Rat Rios and killer and hilarious loop master maestro Marc Rebeillet, playing his first Dallas show since moving to New York earlier this year. — CG

Jeremy Piven at Hyena’s (Plano)
Round two of Ari Gold’s trying to be funny tour. — CG

The Improvised Christmas Movie at Dallas Comedy House
Piggybacking on the success of its made-up-on-the-spot, trope-filled horror movie offering during the Halloween season is this Christmas-themed production. Lord knows that’s a genre with plenty of cliches of its own. — CG

Let’s Ride This 10-Mile Loop at DART Mockingbird Rail Station
Turn on your little GPS/mile-tracking app of choice and it’ll be shaped like the state of Texas at the end of this 10-mile loop around Dallas. — CG

Tyler Childers at The Rustic (Sold Out)
After selling out Canton Hall this summer, the Kentucky country man continues to sell out big Dallas venues. Just this week, he announced a return trip to town, playing Billy Bob’s in April. Guess it’d be wise to nab tickets sooner than later. — CG

Jeremy Piven at Hyena’s (Fort Worth)
Hug it out. — CG

Dumpling Pop-Up at Avoca Coffee
Participate in this pilot program and prove it is worth keeping around. Pre-order some dumplings here, and then pick them up at Avoca. Vegetarian options available. — CG

HaHa Hospitality Variety Show at Granada Theater
On Sunday night, three service industry veterans are teaming up to host a night filled with comedy, music and magic at the Granada Theater, all in hopes of shedding some light on the issues of depression, anxiety, substance abuse and suicide within their industry. — Pete Freedman

Sleep at The Bomb Factory
The band dropped one of the great all-time stoner metal this past April 20, appropriately enough. Earplugs are a must. — CG

John Fullbright at Kessler Theater
Born in the same small Oklahoma town that gave us Woody Guthrie, John Fullbright never shied away from his roots. He first made a name for himself performing in an annual folk fest named after Guthrie. Since, he’s released a handful of albums that exude a similarly bold, rootsy style to forbearers Steve Earle and Townes Van Zandt, and his tune “Gawd Above” appeared on the August: Osage County soundtrack. — CG

An Evening With Tengger Cavalry at Three Links
An evening featuring nothing but this New York-based, nomadic Mongolian folk metal band. — CG

Tobe Nwigwe at The Door
The star UNT linebacker has gone from jockin’ to rockin’, turning an old football injury into a successful, Houston-based rap career. — CG