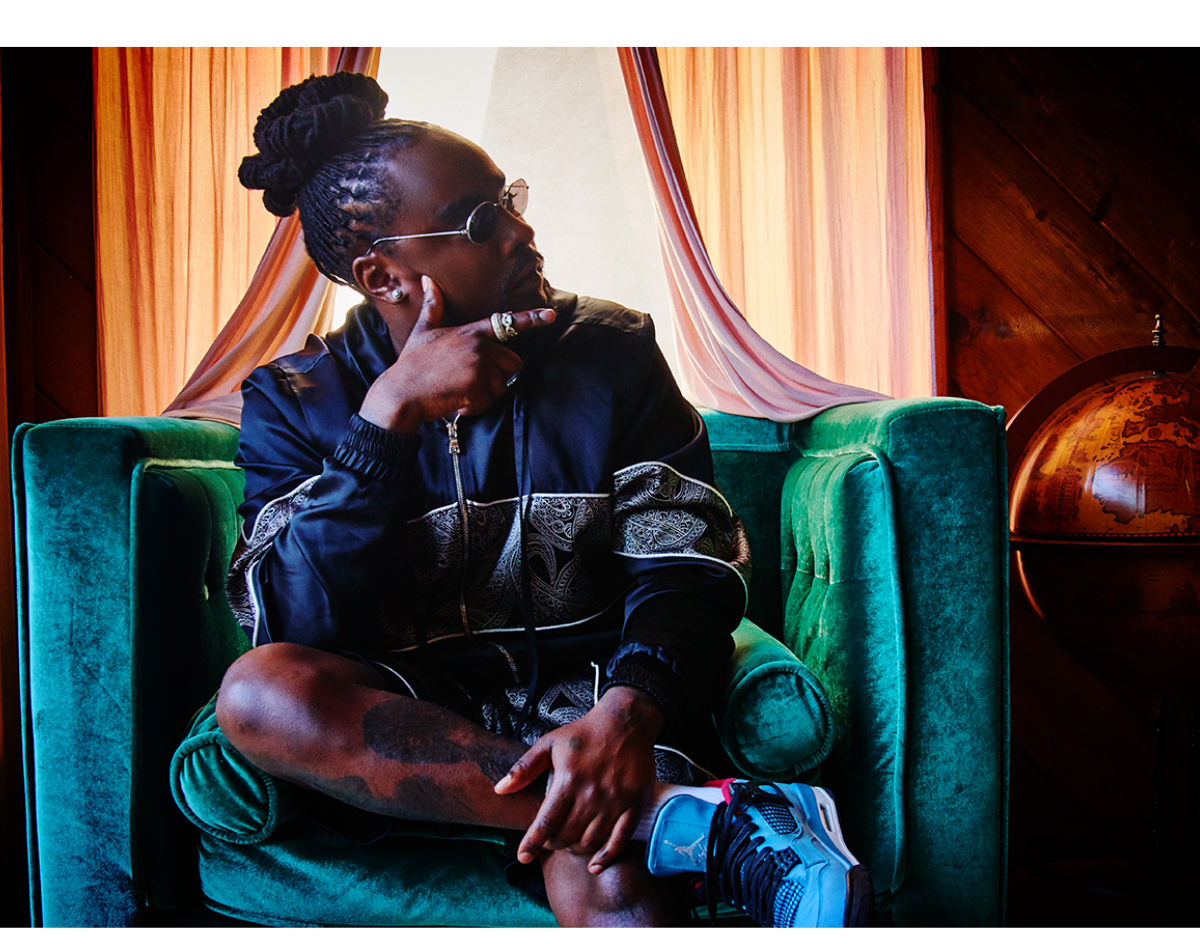 Ride Out With Wale, Get Ready To Rumble With The WWE And Brace Yourself For Some Wild West Combat With Starfruit. Plus More!

One of the visionary comedians behind the Monty Python troupe, Terry Jones, passed away this week at the age of 77.

The British “master of the absurd” was instrumental to the stream-of-consciousness pacing and anarchic visual flair the Pythons brought to both their Flying Circus TV show and subsequent films.

Jones was credited alongside Terry Gilliam as co-director of the perennial nerd classic Monty Python and the Holy Grail, and then took the sole reins for Life of Brian and Monty Python’s The Meaning of Life.

Believe it or not, those crowning achievements might not have come to be without Dallas’ help. Our local PBS affiliate, KERA, was the first television station in the United States to ever broadcast Monty Python’s Flying Circus.

“Python couldn’t have gone out on any other channel apart from PBS,” recounted Jones when the troupe appeared on one of the channel’s pledge drives in 1975.

At one point, an audience member resembling a Dazed & Confused extra asked the group about the difficulties they’ve faced with censorship.

That legacy of irreverence and imagination, corporate interests be damned, lives on in plenty of this weekend’s events happening around Dallas, too. — Daniel Valdez

Phora at Canton Hall
In case you want to get a sense of what kind of artist the California rapper is, he is a noted admirer of Hopsin and Logic. So, uh, prepare to get preached to. — Garrett Gravley

Wale at House of Blues
The self-described “Ambassador of Rap for the Capital” is a modern rap purveyor whose latest record, Wow… That’s Crazy, charted at no. 7 on Billboard Top 100, marking his fourth top ten album. — Mason Geear

Mattiel at Three Links
This band is Jack White-approved, in case that has any swaying power over you. — GG

WWE Friday Night Smackdown at American Airlines Center
The WWE is bringing the sweet pretend pain to Dallas, with superstar wrestlers like Daniel Bryan and Sasha Banks on the card. Whoever loses the match between Roman Reigns and King Corbin has to eat dog food, which sounds gross, but honestly doesn’t even make the top 100 most humiliating things Vince McMahon’s made his wrestlers do. — Daniel Valdez

Dwight Yoakam at The Bomb Factory
When Dwight Yoakam came into the limelight in the ’80s, Nashville was fixated on country music that was more pop-friendly, and in that circuit, there was no room for someone like him. So he moved to L.A. instead and paid his dues in punk clubs, sharing bills with roots acts such as Los Lobos and The Blasters, as well as punk acts such as X and Husker Du. The man Johnny Cash once called his favorite male singer is back in town to kick off the new decade. — GG

Starfruit at Texas Theatre
The outrageous art-pop collective of Starfruit is finally releasing its first full-length record, Wild West Combat. To celebrate, the group is filling the stage with a nine-piece band. Joining the band for the night’s bill are fellow synth-pop purveyors LLORA and Mattie. — DV

Marlon Craft at Ruins
Marlon Craft is a New York rapper who has received co-signs from names like Killer Mike and T.I. (back when getting the approval of the latter wasn’t as bad of a flex as it is now), and signed with Sony’s Same Plate label earlier this year. If politically-charged hip-hop is your speed, you will probably dig this. — GG

Kendra Amalie at Rubber Gloves
Amalie’s adventurous art-folk sounds like the eerie pagan rituals of “Midsommar” in musical form. Somebody get Ari Aster at this show, stat. — DV

Alan Walker at Stereo Live
Norwegian DJ Alan Walker has collaborated with some of the biggest names in pop and dance music such as Noah Cyrus, Avicii and Steve Aoki. No big deal, right? His magnetic energy will be sure to keep Dallas partying all night long. — MG

Saved By The ’90s at House of Blues
A Friday night without a ’90s tribute band? As poet laureate Cher Horowitz once said, “Ugh, as if!” — DV

Levi Weaver at Sons of Hermann Hall
Since 2016, Levi Weaver has put his folk-rock storytelling on pause to focus on his day job: writing about the Texas Rangers for The Athletic. Fortunately, it’s the off-season, so he’s able to pick his guitar back up for this special gig benefitting the Refugee Services of Texas agency. — DV

Jason Isbell and The 400 Unit at Winstar Casino
A few years back, Grantland (RIP) compiled a list of the ten most gut-wrenching tracks by this alt-country troubadour, so start practicing your “I’m not crying, you’re crying” alibi now. — DV

Mirage Music Club at J&J’s
This chiptune jazz-rock project sounds like the long-lost soundtrack to a Super Nintendo game. — DV

The Paranoyds at Three Links
The wonderfully named Surfbort was originally set to co-headline this tour, but this SoCal garage-rock crew will keep the jams coming in its absence. — DV

Queensryche at House of Blues
The band that is masquerading as Queensryche these days seems to play House of Blues at least once a year. If Geoff Tate’s absence isn’t a dealbreaker, here’s one of many chances to see them. — GG

Nada Surf at The Kessler
2020 marks Nada Surf’s 30-year anniversary. Finding that out is like finding out Gwen Stefani is older than Ted Cruz. — GG

British Lion at Trees
This Steve Harris-led passion project that was born in 2012 has since become a full time job for him — Harris is the bassist for Iron Maiden and has been since its formation in the early ’70s. — MG

The Brook & The Bluff at Club Dada
Have you ever heard of “groovitational pull?” Well, this soul-influenced group from Birmingham claims you’ll experience just that when you listen to their music. — Nikki Johnson-Bolden

J.I. at HOB
The self-proclaimed “Prince of New York” has come a long way since his early days of fame on the Lifetime show “The Rap Game.” Not a highly watched show, but now at just 18, J.I. pulls in over half a million monthly active listeners on Spotify. — MG

Church of Cash at Gas Monkey Bar N’ Grill
What might at first sound like a poor man’s lucky day, is actually a Johnny Cash tribute band. Even more strange, is the fact that the band got its start in Honolulu, Hawaii. Really speaks to the love for Cash goes the south, we guess. — MG

Shoegaze at Double Wide
The gauzy, dreamy-rock perfected by U.K. acts like My Bloody Valentine lives on at Double Wide, with local noise purveyors Audiobaton, Flowerbed, Desert Museum and The Ends. — DV

Mind Spiders at Main at South Side
Five years ago this month, your trusty Central Track editorial intern got tinnitus seeing this garage-punk crew open for Ex Hex at Club Dada, so take our advice and bring earplugs. — DV

Bingo Players at Stereo Live
Even after one half of this EDM duo tragically passed from cancer, Maarten Hoogstraten has kept both spirits and BPM high with his progressive house stylings. — DV

Elaina Kay’s Cornbread & Country at Sons of Hermann Hall
What good is a hoedown on an empty stomach? Tickets to this Texan country showcase will include dinner by chef Graham Dodd. On the menu this year is short ribs, jalapeño cornbread and boozy cupcakes to boot. — DV

Community Beer Co. 7-year Anniversary
The anniversary party for this Dallas microbrewery promises 70+ beers to sample, live tunes, food trucks and “even more porta-potties than last year.” You know, just in case the porta-potties seal the deal for you. — DV

Arty at Lizard Lounge
Progressive house veteran Armin Van Buuren is hitting South Side Ballroom on January 31st, but if you can’t wait that long for pop-minded EDM, one of Van Buuren’s frequent collaborators is DJing Lizard Lounge. — DV

JVNA at Deep Ellum Art Co.
In addition to her original EDM beats, this Los Angeles producer mashes up sources as disparate as The Neighbourhood and the Kingdom Hearts soundtrack. — DV

Trey Anastasio at The Bomb Factory
This guy is one of Phish’s co-founders, and this show is of particular significance to Phish Heads, not only because Anastasio was born in Fort Worth, but because Bomb Factory was the site of one of the band’s most famous shows yet — it was the subject of a 1994 live album recording, and is often referred to as “Tweezerfest.” — GG


Thouxanbanfauni & Teejayx6 at Trees
This is a co-headlining show, but Soundcloud MC Thouxanbanfauni isn’t nearly as notorious as scam-rap prince, Teejayx6. His bass-boosted tales of dark web dealings and identity fraud have even led to actual criminals following in his footsteps. Maybe keep a close eye on your credit cards at this one? — DV

Bewhy at Canton Hall
Korean rap hasn’t taken over the U.S. the way K-Pop has, but this MC is making some progress toward that if he’s playing venues the size of Canton Hall. — DV

Fusion Fest 2020 at Three Links
The concept of genre as we know it is dead, and Fusion Fest is celebrating that with a showcase that spans the local music spectrum. Among this year’s performers are hip-hop collective Cure for Paranoia, noise-rock hellraisers Thyroids and the spacey rapper CardiacTheGhost. — DV

The Blue Light Brutal Death Takeover at The Blue Light
As the title might’ve given away, the Blue Light is forgoing its usual Americana acts in favor of death metal bands. Among the lineup’s delightfully devilish band names are Embryonic Devourment and Flesh Hoarder. — DV

Fatdrip Afterlife Release Party at Rubber Gloves
This Dallas up-and-comer raps over beats akin to Travis Scott tracks. The dream-like sounds of Fatdrip’s production, in combination with his unique lyricism, is sure to make for a get-familiar night of music. — MG

Show Your Shorts at Texas Theatre
This year’s Sundance Film Festival began this week, but you don’t need to trek all the way to Utah to see intriguing new short films. Ten local shorts will be screened and put to an audience vote, the grand prize being a fee waiver to submit the winning short to the Oak Cliff Film Festival. — DV