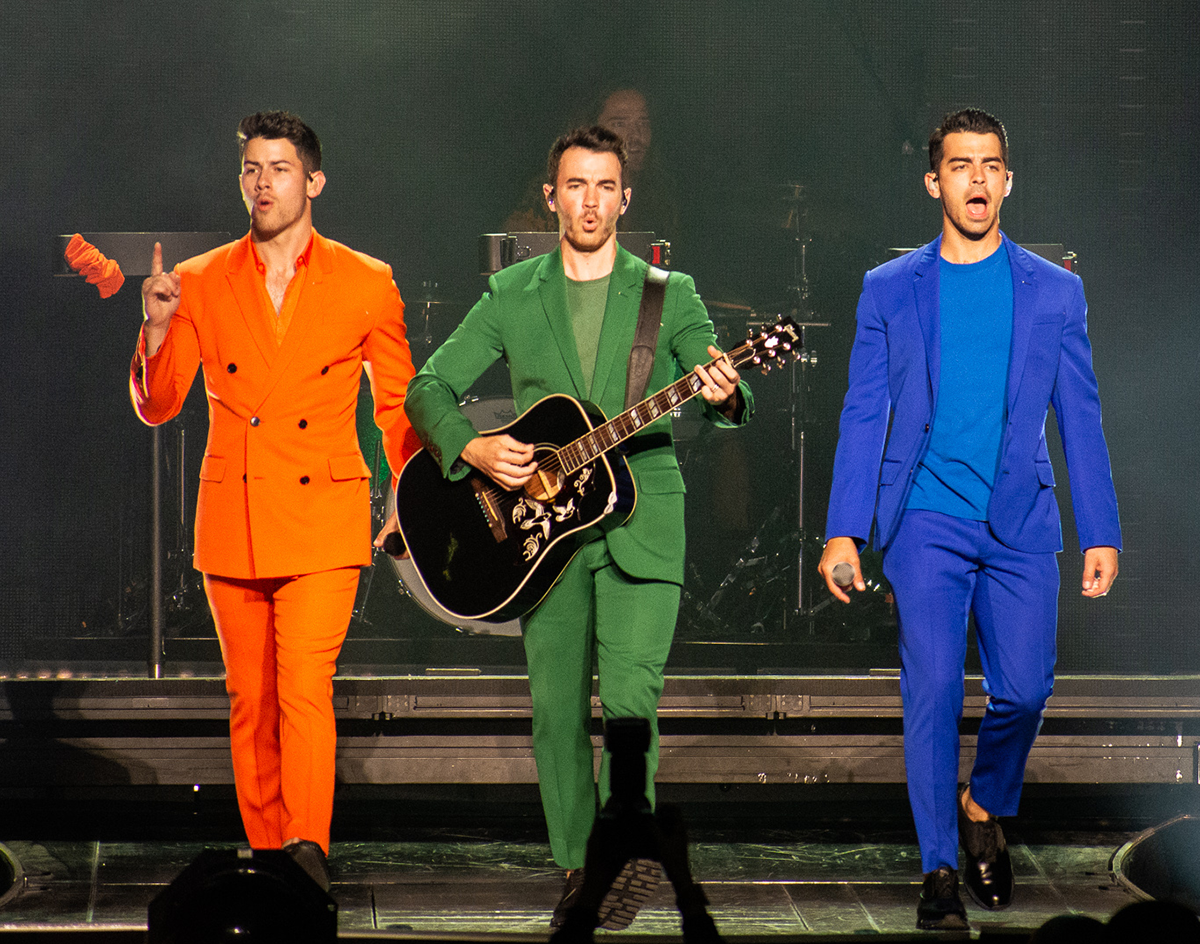 Be A Sucker For The Jonas Brothers, Get Fab With Jonathan Van Ness And Traverse The Last Lost Continent For La Dispute. Plus More!

Spotify has just given us a hint of Dallas’ impact on streaming this decade.

Every year, Spotify releases “Spotify Wrapped”, individualized playlists that tell users what artists, songs and genres they listened to the most throughout that year. If you have music-nerd friends on Twitter, you’ve probably seen them post their customized charts, marveled at the dozens of hours they’ve spent streaming in 2019, and asked questions like “what the fuck is voidgaze?”

In addition to supplying those individual statistics, Spotify releases their own charts detailing the most streamed music of the year globally. It sounds kind of nerdy, and it is, but for pop stans alike, these kinds of stats serve as a way both to demonstrate their devotion to the artists they love and to definitively “prove” that their fave is better than yours.

To celebrate the end of the decade, Spotify has released their statistics on who were the most streamed artists and songs of the 2010s worldwide.

Of course, you can’t talk about streaming dominance without mentioning the “Rockstar” himself, Dallas’ own Post Malone. The face-tatted auto-crooner topped Spotify’s global rankings of most-streamed artists of 2019 and was the third most-streamed artist of the decade overall, just behind the other last reigning kings of the dying monoculture, Ed Sheeran and Drake.

In addition, his collaboration with Rae Sremmurd’s Swae Lee, “Sunflower”, was the third most streamed track of the year, only behind “Bad Guy” by Billie Eilish and “Señorita” by Shawn Mendes and Camila Cabello..

All of those achievements are most certainly impressive, but Post Malone wasn’t the only D/FW-bred artist to make waves on Spotify this year.

“Sucker” by the kind-of sort-of Dallas natives Jonas Brothers, who happen to be performing at American Airlines Center this Friday, ranked as the 15th most streamed act of the year.

The JoBros also charted as one of the most streamed groups of the year, in between the Red Hot Chili Peppers and Fall Out Boy. Which is good news for us, as their Dallas show coincidentally kicks off this list of rad things to do in DFW this weekend. — Daniel Valdez

Jonas Brothers at American Airlines Center
Weren’t they just here back in September? They were, but hey, we’re just glad we don’t have to wait until the Year 3000 to see them play another hometown show. — DV

Nile + Terrorizer at Trees
Death metal legends Nile and influential grindcore outfit Terrorizer will embark on a winter tour far later this year. The former appears to have an upcoming album in the works, and the latter will tour in support of 2018’s Caustic Attack. — Garrett Gravley

Jonathan Van Ness at Toyota Music Factory
If we get Tan, Karamo, Antoni, Bobby and Bruley to also come through, we will finally have all the pieces necessary to complete the Queer Eye Infinity Gauntlet. — GG

Doug Burr at AllGood Cafe
If you haven’t yet been acquainted with Doug Burr’s writerly folk-rock, give “First Son of Connecticut” a try, a track we recently named our Song of the Day. — DV

A Very Messer Xmas Show at Gas Monkey Bar N’ Grill
Local meat-and-potatoes hard rockers Messer are also playing a Christmas concert tonight. This gig is a charity fundraiser in support of the families of deceased cops and firefighters. — DV

The Mr. T Experience & The Queers at Three Links
Rejoice, fans of goofy 90s pop-punk: two of the scene’s most well-known bands are co-headlining this tour. — DV

Jay Leno at The Theatre at Grand Prairie
#TeamCoco forever — Leno has a pretty nice garage though, we’ll give him that. — DV

Wynonna Judd at Arlington Music Hall
Both country music and Christmas music have a love for achingly sincere sentimentality, so it makes sense that one of the most popular ’90s country acts has pivoted to Christmas tunes. — DV

Tyler Henry: The Hollywood Medium at Majestic Theatre
In John Oliver’s Last Week Tonight segment about the Hollywood Medium, he said “At best, it is reckless for a stranger to take a stab at ventriloquizing the dead.” That ethical murkiness certainly hasn’t stopped Henry from cashing in. — DV

Sammy Johnson at Gas Monkey Bar N’ Grill
If we were to guess, we’d say most Americans associate New Zealand with Lord of the Rings, Lorde and maybe Flight of The Conchords. But did you know Kiwis also love . reggae? Case in point, this pop-reggae singer/songwriter. — DV

Shiny Around the Edges at Rubber Gloves
This Denton experimental-pop group has been off the radar for a while now, but it’s finally returning to Rubber Gloves for its first Denton show in over a year. Also on the bill is Hey Jellie, a post-punk project from former members of noise-rockers Erase Errata. — DV

Everything is Terrible! at Texas Theatre
This is a video blog that compiles obscure video and television footage in a way similar to the subreddit /r/NotTimAndEric. Nobody knows that at first glance, though, because let’s be honest, we’re literally in hell right now, and everything is indeed terrible. — GG

Son Little at The Blue Light
After impressive appearances earlier in the decade on records like “Undun” by The Roots, Philly’s Son Little has made a name for himself in modern bluesy soul. — DV

Role Model at Ruins
Yet another in the rapidly saturated field of bedroom-pop wunderkinds, complete with pastel synths and close-mic’d vocals bordering on ASMR. Also, like those artists, he’s sold out his first headlining show in Texas. — DV

Travis Tritt at Billy Bob’s
He’s not quite as omnipresent on the country airwaves as he was with his ’90s singles like “Help Me Hold On,” but he can still pack venues the size of Billy Bob’s. — DV

Cherubs at Double Wide
Make sure to pack some earplugs, these Austin psychedelic metal vets are notoriously noisy. — DV

Mark Knight at Stereo Live
It’s hard enough to be successful in one medium, much less two, but Mark Knight has made a successful transition from video game composer to real-world EDM DJ. — DV

Kim Ann Foxman at It’ll Do Club
A former member of disco revivalists Hercules & Love Affair, Foxman has had a very respectable career since then as a house DJ. With those dance-world cool points, she’s a perfect fit for the recently revived It’ll Do club. — DV

1st Annual Tamal Festival at Latino Cultural Center
As Dallas temperatures mercilessly plunge, a warm tamale sounds even better than usual, which makes it great timing for the LCC to host its first ever tamale festival. This free event aims to celebrate this staple of Latinx cuisine with the help of local tamaleros, including Luna’s Tortillas and vegan vendors Down to Earth. — DV

Emo Nite at Lizard Lounge
It’s Emo Nite’s final Dallas party of the 2010s, so get one last ode to adolescent angst in before the ’20s. Emo is set to make a comeback this decade anyway, right? — DV

La Dispute + Touche Amore at Granada Theater
In the early ‘10s, La Dispute and Touche Amore attracted buzz in post-hardcore circles for their spoken word vocal deliveries and for adopting a more traditional screamo style that takes notes from pioneers such as Pg. 99 and Orchid. Now, they’re co-headlining a tour which will be opened by breakout noise pop quartet Empath. — GG

Wax at Trees
You might remember this comedy rapper from a few Epic Rap Battles of History videos, or maybe Ray William Johnson’s channel if you had, well, unfortunate taste in Youtube content earlier this decade. Opening for him is Lance Skiiiwalker, a much less goofy MC who’s signed to hip-hop heavyweights Top Dawg Entertainment. — DV

Dee-1 at Deep Ellum Art Co.
New Orleans rappers are known for flaunting their newfound wealth; for example, the phrase “Bling Bling” wouldn’t even exist without Cash Money’s Hot Boyz. Christian MC Dee-1 is on a less braggadocious path – his viral single “”Sallie Mae Back”” is literally about paying back his student loans. — DV

Christmas with Krampus at Dark Hour Haunted House
If you’re a parent who’s totally stumped on new ways to traumatize your kids, why not get them a picture with everyone’s favorite yuletide demon? This free event is also a Toys For Tots drive, so you can donate afterwards if you need to repair your conscience. — DV

Black Christmas at Texas Theatre
From the director who brought you A Christmas Story, here’s a holiday slasher that’s much less likely to be played on a 24 hour loop on TBS. — DV

Double Wide December Flea Market at Double Wide
Instead of resorting to gift cards as last-minute gifts this year, you might want to try Double Wide’s flea market for your hippest and pickiest friends. — DV