You Need To Vote In Saturday’s City Council Elections. 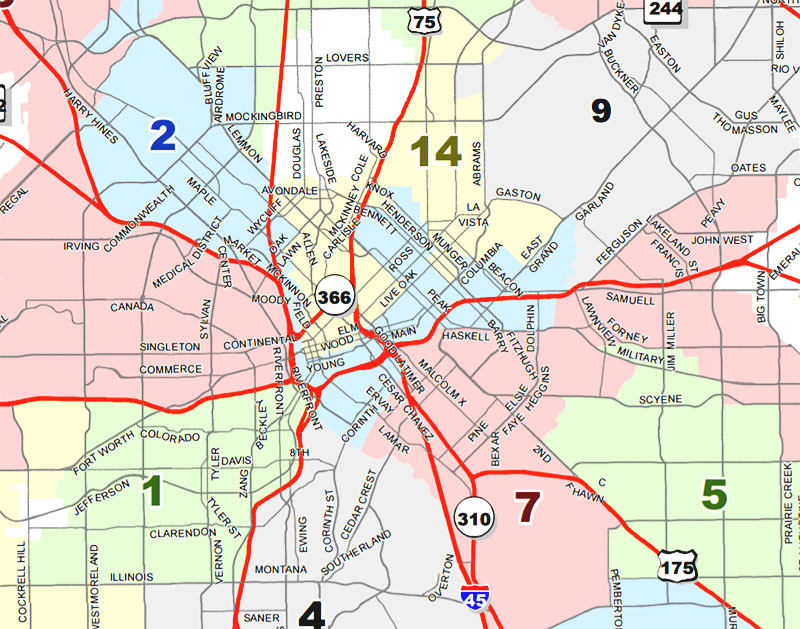 This Year’s City Council Elections Are Maybe Dallas’ Most Important Ever. Here’s Why You Need To Vote, And Some Suggestions On Who You Should Pick In Each District.

On Saturday, May 6, polling stations across the city will host what’s shaping up to be one of the most interesting Dallas city council elections in years — maybe ever.

Of course, if you’re a typical Dallas resident, your response to this news is probably somewhere along the lines of “City council who…? City council what…?”

But voter apathy goes a long way to explaining why Dallas’ quality of life is so poor. It’s why a city in the midst of a booming region lacks the level of basic services and public amenities that citizens of other cities take for granted — well-maintained streets, beautiful parks, reliable police protection, safe and efficient mass transit, thoughtfully-planned, clean neighborhoods with wide sidewalks, bike lanes, functioning traffic signals, freedom of fear from packs of marauding dogs, and so on.

Here’s how you should think of things: The public realm, which is cared for by the city, is really an extension of your living room. So don’t you want some say into how it is designed and functions?

When Dallas residents — yes, I’m speaking to you! — fail to exercise their right to vote, they surrender control of their tax dollars to well-connected special interests. And so, instead of prioritizing the delivery of basic services and enhanced quality of life to its residents, Dallas prioritizes subsidies of monolithic Stalin-esque housing blocks, convention and tourism “bribes” and propaganda (read: the city-owned hotel/convention center, meeting incentives and deceptive tourism advertising). And that’s before we even get into issues like bloated no-bid contracts for energy, real estate, designer bridges and a highway through our largest park.

So, OK, let’s say the above rubs you the wrong way — as it should. And now you actually want to exert some control over your tax dollars and improve your quality of life here in Dallas. Who should you vote for and why?

The following are my suggestions — but you should really familiarize yourself with your district, do your own research, form your own opinion and get out there and vote. Yes, it’s kind of a hassle. But, I promise, you’ll feel better about yourself once you’ve done it — just like brushing your teeth before bed. I detail a little bit of reasoning for each of my selections below, but I would like to first acknowledge that there’s no real science behind my selections. I just picked the candidates who seem to be the most authentic, knowledgeable and passionate candidates, as well as the ones who seem most responsive to the needs of people who live in their districts, and the candidates who put the interests of Dallas above those of the region. Because that is really where the city seems to consistently get the short end of the stick.

District 1.
Pick: Scott Griggs.
Why? He’s a scary-smart, super genius lawyer who understands the intricacies of city government better than just about anyone.

District 2.
Pick: Adam Medrano.
Why? Medrano’s a thoughtful, approachable neighborhood advocate with a strong background in parks and recreation who understands that paying attention to the little stuff is what makes a place great.

District 3.
Pick: Joe Tave.
Why? Tave lost his bid for this seat after making a strong showing in 2015. I still like him, but he’s unfortunately been slow to campaign this time around.

District 4.
Pick: Dwaine Caraway.
Why? He’s a loquacious, effective and highly entertaining bulldog, and he sticks up for his community’s needs. A long-time presence on the southern Dallas political scene, John Wiley Price is his nemesis.

District 5.
Pick: Dominique Paulette Torres.
Why? Torres just seems like a breath of fresh air. This smart, passionate and caring young woman shows an amazing ability to connect with residents in this long-suffering, neglected district.

District 6.
Pick: Omar Narvaez.
Why? In this hotly contested race, I’m siding with Narvaez, a hard-working guy who’s going up against Monica Alonzo, the incumbent who consistently favors well-heeled developers over the needs of long-term, impoverished residents.

District 7.
Pick: Adam Bazaldua or Tammy Johnston.
Why? Both are impressive newcomers who are challenging the remote, largely inaccessible incumbent, Tiffinni Young, who supports giving Fair Park to one of Ray Hunt’s friends.

District 8.
Pick: Eric LeMonte Williams.
Why? Long a political voice in Dallas, Williams ran for Congress against Eddie Bernice Johnson in 2014, and has since turned his focus to local issues, which is why, for the second straight election now, he’s running to represent Dallas’ southernmost district.

District 10.
Pick: Adam McGough.
Why? He’s another reliable neighborhood-focused leader, which is why he’s due to be coming back for a second term unopposed.

District 11.
Pick: Candace Evans.
Why? After becoming appalled with incumbent Lee Kleinman’s support of regional interests over Dallas — and his open hostility to our police and firefighters — this established Dallas journalist entered the race to turn things around in her district.

District 12.
Pick: Sandy Greyson.
Why? Another reliable representative of her neighborhoods who is running unopposed.

District 14.
Pick: Philip Kingston.
Why? Kingston is engaged in arguably the most hotly contested race of this election, and there’s a reason for that. He’s been so effective at exposing and stopping unfavorable deals for the city that he has managed to unite a group of wealthy outsiders from the Park Cities, Lewisville, Frisco, DeSoto and Preston Hollow into funding a Super PAC dedicated to opposing him. That’s real power.