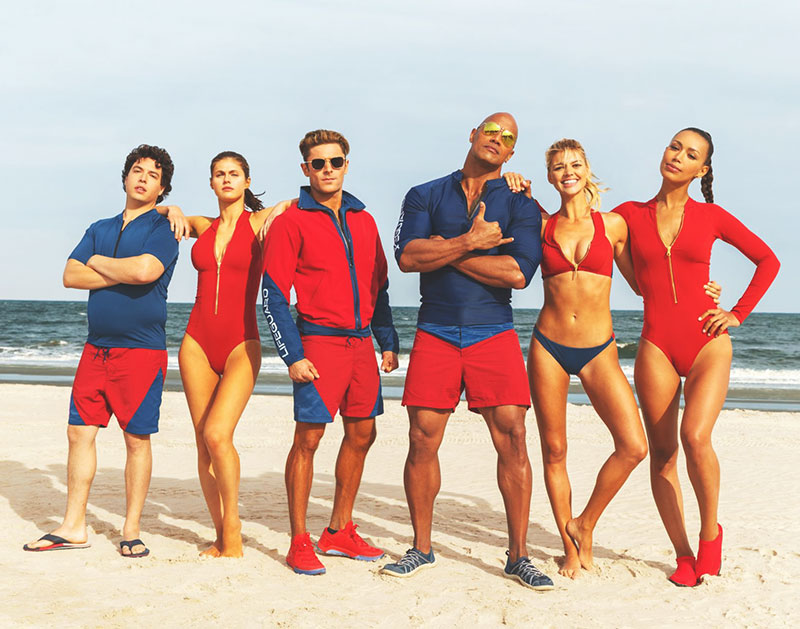 On Baywatch, Guardians Of The Galaxy Vol. 2, Kedi and The Rest Of The Movies You’ll Be Seeing In Movie Theaters This Month.

Are y’all even ready for summer movie season? Hope so, because it’s starting right here, right now, with a sequel to one of the best-received comic book films of all-time kicking the season off right.

But it’s not just big-budget action that’s on display this month. There’s also some big-budget comedy and, hey, some talkies too!

With temperatures beginning to tick upwards, these are the films you’re going to watching as you seek some of that sweet, cool movie theater respite.

Guardians of the Galaxy Vol. 2.
Director: James Gunn.
Writer: James Gunn.
Cast: Chris Pratt, Zoe Saldana, Dave Bautista, Kurt Russell.
Opens: Friday, May 5.
The summer movie season officially kicks off with — what else? — a Marvel movie. You’re unlikely to be disappointed, since this movie is loads of fun and the soundtrack rules as usual. Just don’t expect to be blown away. Our own Javier Fuentes has more.

Snatched.
Director: Jonathan Levine.
Writer: Katie Dippold.
Cast: Amy Schumer, Goldie Hawn, Ike Barinholtz, Randall Park.
Opens: Friday, May 12.
One that could truly go either way, Amy Schumer teams up with Goldie Hawn for a South American vacation that goes awry when they’re kidnapped. Katie Dippold, the writer of The Heat and the Ghostbusters reboot, is behind this one, so I’m hoping for a raunchy good time and not an action comedy disaster.

Alien: Covenant.
Director: Ridley Scott.
Writers: John Logan, Dante Harper.
Cast: Katherine Waterston, Michael Fassbender, Danny McBride, Noomi Rapace.
Opens: Friday, May 19.
I’ll go to bat for Prometheus any day, so this is one of my most anticipated movies this summer. The latest chapter in the Alien saga finds a group of colonists – this time all couples, save for a few crew members – who are off to populate a newly discovered planet. But of course they go into places they shouldn’t, and all kinds of gross shit starts happening.

Baywatch.
Director: Seth Gordon.
Writers: Damian Shannon, Mark Swift.
Cast: Dwayne Johnson, Zac Efron, Alexandra Daddario, Priyanka Chopra.
Opens: Friday, May 24.
Baywatch went off the air more than 16 years ago, and I’ll give the Rock a pass in almost anything, so I’ll trust that this is more tongue-in-cheek, like 21 Jump Street or The Brady Bunch Movie, and not a self-infatuated yuk-fest.

[A note about limited releases: Unlike the big movies, which are booked months or years in advance, they don’t make it to Dallas on a regular schedule. It’s all up to the distributors and the theaters, which are usually independent. Check out the websites for both Angelikas (Dallas and Plano), both Drafthouses (Cedars and Richardson), the Magnolia and the Texas Theatre throughout the month to see what’s showing where.]

3 Generations.
Director: Gaby Dellal.
Writers: Gaby Dellal, Nikole Beckwith.
Cast: Naomi Watts, Elle Fanning, Susan Sarandon, Linda Emond.
After years on the festival circuit and at least one name change, this well-intentioned dramedy is finally seeing the light of day. Elle Fanning plays Ray, a teenager transitioning from female to male. Even if the film falls flat, this is by far the most mainstream film to deal with the trans experience. Hopefully it will inspire more filmmakers to tell their own stories.

The Dinner.
Director: Oren Moverman.
Writer: Oren Moverman.
Cast: Richard Gere, Laura Linney, Steve Coogan, Rebecca Hall.
Whether it’s Coherence or The Invitation, I’m always intrigued by movies about dinners that start off friendly and then devolve into chaos. This looks like a bigger-budget version of that kind of movie, but without a sci-fi or horror element. Richard Gere and Steve Coogan play brothers who have a meal with their wives and end up discussing ta terrible crime their sons might be guilty of. Oren Moverman is a gifted writer-director who never makes the same movie twice, so it will be interesting to see him try is hand at this.

Kedi.
Director: Ceyda Torun.
Aside from I Am Not Your Negro, this is the biggest documentary of 2017. If you’re a cat person (which I’m not… don’t try to change me), you’ll love this look at Istanbul through the felines that roam the streets, stealing food, begging for petting and getting into fights in a beautiful city that’s on the verge of falling apart.

The Lovers.
Director: Azazel Jacobs.
Writer: Azazel Jacobs.
Cast: Debra Winger, Tracy Letts, Lesley Fera, Aiden Gillen.
Debra Winger and Tracy Letts play a long-married couple both having affairs. On the day they plan on confessing their infidelity, they unexpectedly fall back in love, complicating everything. What’s this? A movie for grown-ups? Count me in.

Stalker.
Director: Andrei Tarkovsky.
Writers: Arkadiy Strugatskiy, Boris Strugatskiy.
Cast: Aleksandr Kaydanovskiy, Alisa Freyndlikh, Anatoliy Solonitsyn, Nikolay Grinko.
Playing At: Texas Theatre.
Showing: Thursday, May 11; Sunday, May 14.
Before it gets the Criterion treatment, Andrei Tarkovsky’s most acclaimed film gets a 4K restoration on the big screen. Like the trippiest science fiction, no real explanation of the film’s plot will do, since it’s so much weirder and deeper than that. The title refers to the guide who leads two men into a forbidden area called the Zone, which can change shape when humans are around.

The Color of Money.
Director: Martin Scorsese.
Writer: Richard Price.
Cast: Paul Newman, Tom Cruise, Mary Elizabeth Mastrantonio, John Turturro.
Playing At: Texas Theatre.
Showing: Friday, May 12.
Paul Newman won an Oscar and Tom Cruise held his own in this sequel to 1961’s The Hustler. Both guys are effortlessly smooth as two generations of pool sharks. This film is part of the Texas Theater’s tribute to late cinematographer Michael Ballhaus, who worked extensively with Martin Scorsese. They’ll also show Goodfellas on the 5th and After Hours on the 19th.

Stop Making Sense.
Director: Jonathan Demme.
Playing At: Inwood Theatre.
Showing: Friday, May 26.
The best concert doc of all time was a must-see even before Jonathan Demme passed away last month. This Talking Heads show is just extraordinary, and showed Demme had an eye for capturing that action. It had a big impact on Justin Timberlake, who called Demme to direct his concert for Netflix, and Bill Hader and Fred Armisen, who parodied the film on Documentary Now.

Titicut Follies.
Director: Frederick Weisman.
Playing At: Alamo Drafthouse Cedars and Richardson.
Showing: Monday, May 29 (Cedars); Wednesday, May 31 (Richardson).
For many years, this Frederick Weisman documentary was banned. That’s because it didn’t shy away from the horrors inflicted on the inmates at the Massachusetts insane asylum where he filmed. It’s a harrowing, controversial film from one of the masters of the form.