Who Wants To Be Friends With The Dallas Police? 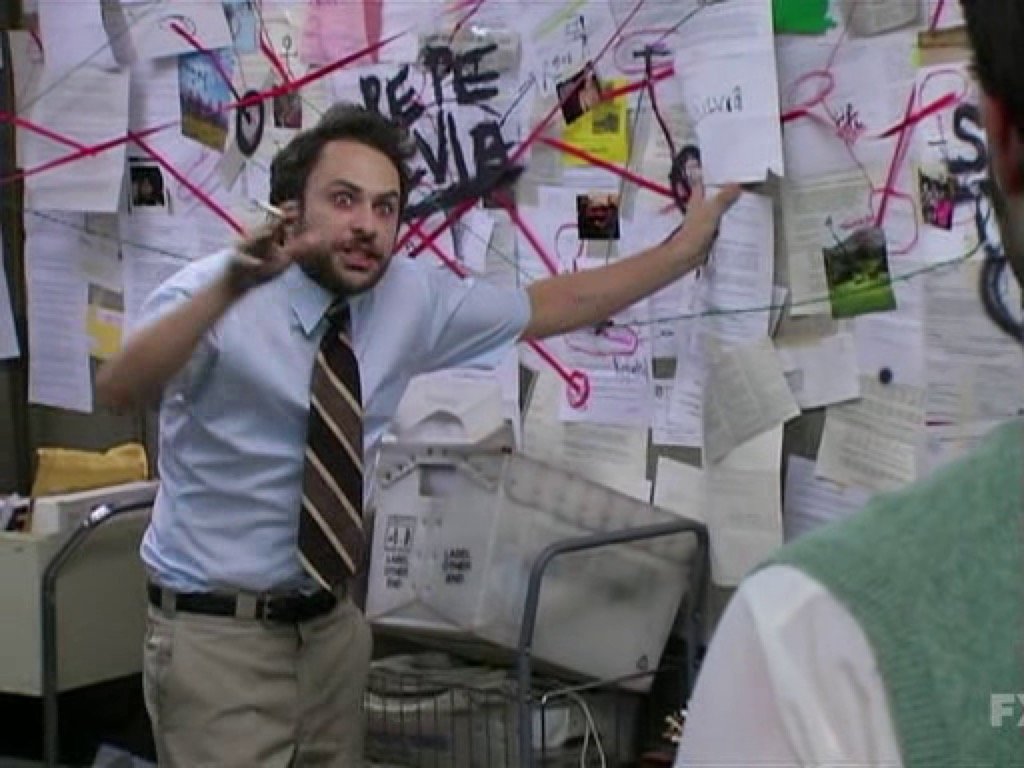 Lots Of Super Connected People, Turns Out! (Per Our Network Analysis Of Those Who Support The ‘Friends Of The Dallas Police,’ Anyway.)

Public opinion about police has shifted dramatically over the past few months.

In June, the Associated Press reported that about half of American adults now say police violence against the public is a “very” or “extremely” serious problem — up from about a third as recently as September last year.

In a sense, fewer people seem to want to be friends with the police these days.

But that seems unlikely to be the case for the board members, advisors, and donors of a little-known organization here in Dallas called the Friends of The Dallas Police. The organization, which “takes a special opportunity each year in the fall to thank these brave men and women for their exceptional commitment by hosting a dinner in their honor” provides awards and scholarships to DPD employees.

But, given the ongoing protests against police brutality, the continued embattled position of DPD Chief Renee Hall and the changing public opinion over policing, it’s worth asking: Who wants to be such good friends with the Dallas Police Department these days?

It’s no surprise that powerful individuals and corporations often fund police foundations (and related organizations) in cities all across the country. As has been previously reported elsewhere, Dallas is no exception in this regard: Energy Transfer Partners (a company known for its role in the Dakota Access Pipeline) and The Dallas Mavericks are both among the Friends of The Dallas Police’s corporate sponsors.

But these two examples are just the tip of the iceberg of a network of individuals who act as board members and advisors to the organization, and they only hint at the volume of corporations that donate to the group in exchange for tables at its awards ceremonies. These individuals and organizations are not a secret; the Friends of The Dallas Police website lists of these leaders and companies prominently.

This investigative and analytical approach, known as network analysis (often used by practitioners in a variety of intelligence and law enforcement fields), results in what is called a “network map.”

An analysis of the Friends of The Dallas Police network map reveals a number of striking facts and patterns. Most notably, a number of board members, advisors and corporate donors have been involved in alleged or documented cases of fraud and corruption (see: Fraught Business). More generally, a wide range of power players — business leaders, nonprofit leaders, billionaires, city council members and judges — are involved. Notably, at least three prominent billionaire Dallas families are involved as advisors or donors (see: Family Ties), as are members of the Dallas Citizens Council, an organization dubbed Dallas’ “shadow government” by Texas Monthly (see: Shadow Government).

Below are just some of our findings from our network analysis. (For far more details regarding the Friends of The Dallas Police network, though, please dive into the interactive version of our mapping efforts here or embedded at the bottom of this post.) 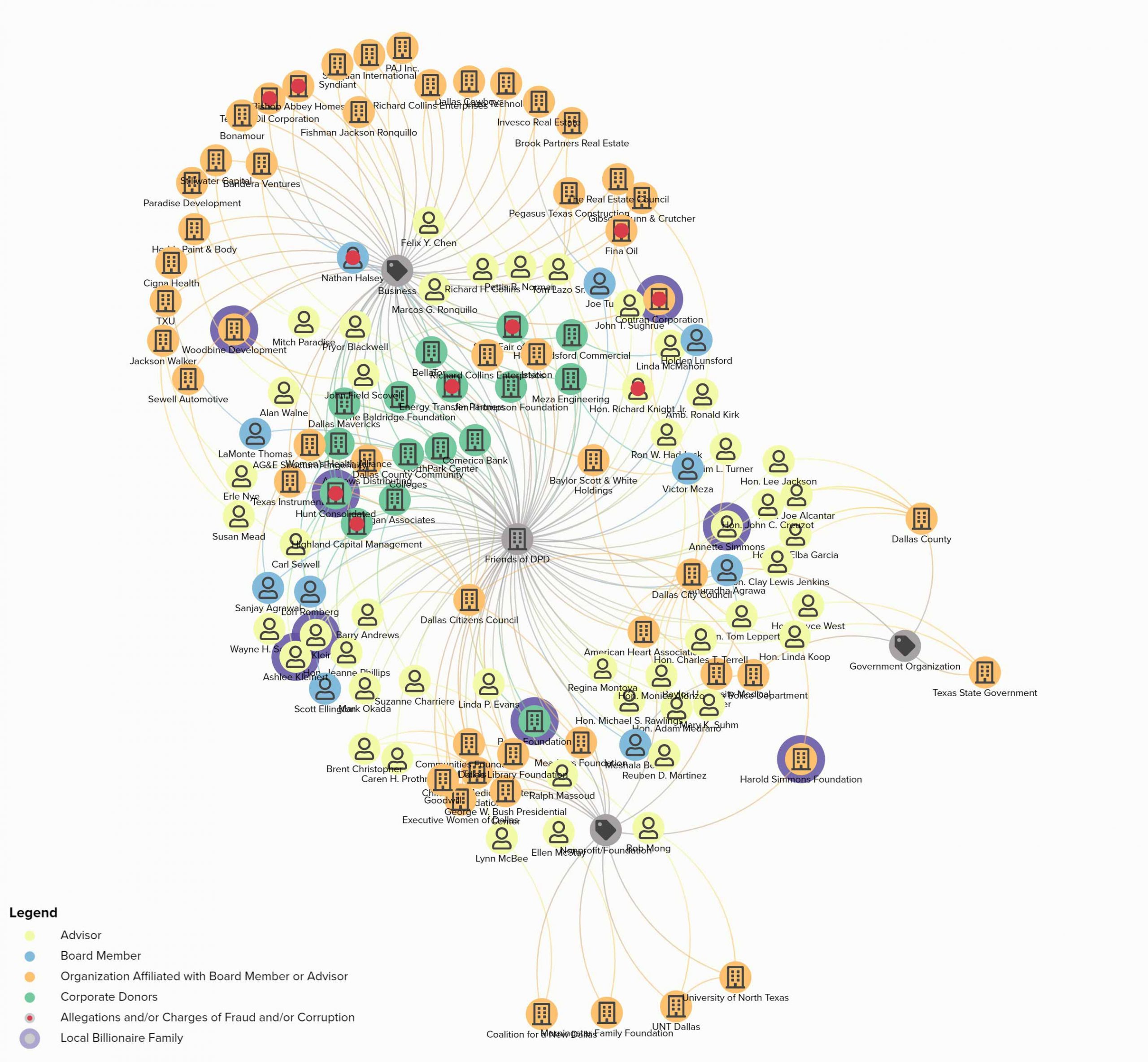 The Friends of the Dallas Police website lists 10 board members and 48 advisors. A large number of individuals with a range of backgrounds are involved to varying degrees: CEOs, nonprofit directors, elected officials, judges, lawyers, billionaires and more. Moreover, these individuals themselves have a great many affiliations considering their various positions as either leaders, investors or public servants.

While some of these individuals and organizations stand out — particularly for the irony of their alleged or confirmed criminal activity in relation to their friendship with the police — most individuals and donors are involved in a seemingly innocuous capacity.

For most listed individuals and organizations, our research failed to uncover significant publicly available information. One should not assume guilt by association, nor should they infer guilt from allegations or where lawsuits have been dismissed.

Nevertheless, this analysis represents one of the overlapping networks of power in Dallas, and it touches on another perhaps even more significant network, the Dallas Citizens Council, that was initially founded by R.L. Thornton and has dominated Dallas politics ever since.

OK, Charlie, I’m Going To Have To Stop You Right There

At first glance, this network map looks a lot like the Pepe Silvia meme referencing the investigation into a conspiracy in the mailroom on the show It’s Always Sunny In Philadelphia. But in the words of Charlie, “I got a paper trail to prove it. Check this out! Take a look at this.”

None of this information is “news” as it is not breaking and all the individual pieces are publicly available. Viewed individually, the aggregated pieces are likely to be of little use. But connecting them together reveals some interesting facts. Most shockingly, it shows that the acting president of the Friends of The Dallas Police seems to have his own problems with the law.

Our map appears to be the first time much of this information has been consolidated in one location, and an interesting concept related to how the intelligence community handles classified information may be relevant here: “Sometimes combining two or more pieces of unclassified information can result in an aggregate that is classified. This occurrence is called compilation, or aggregation.”

Our analysis has revealed a number of aggregates perhaps not confidential but nevertheless illuminating, which suggests that the answer to our initial question — who wants to be friends with the Dallas Police? — may simply be those who stand to gain the most from such an affiliation.

Few of the listed board members and advisors publicly advertise their participation in the Friends of The Dallas Police organization beyond their listing on the leadership web page, which raises at least two follow-up questions: What are the duties of an advisor, and how much are these individuals and organizations aware of each other’s backgrounds and activities?

Ultimately, such level of analysis and investigation is not answerable within the scope of this article. Moreover, some of the subjects of this analysis have been noted to rarely accept or return calls from journalists.

But if you happen to see the name of someone you know personally, perhaps you can ask about their involvement yourself.

Fraught Business: Individuals And Companies With Allegations Or Charges Of Fraud And/Or Corruption 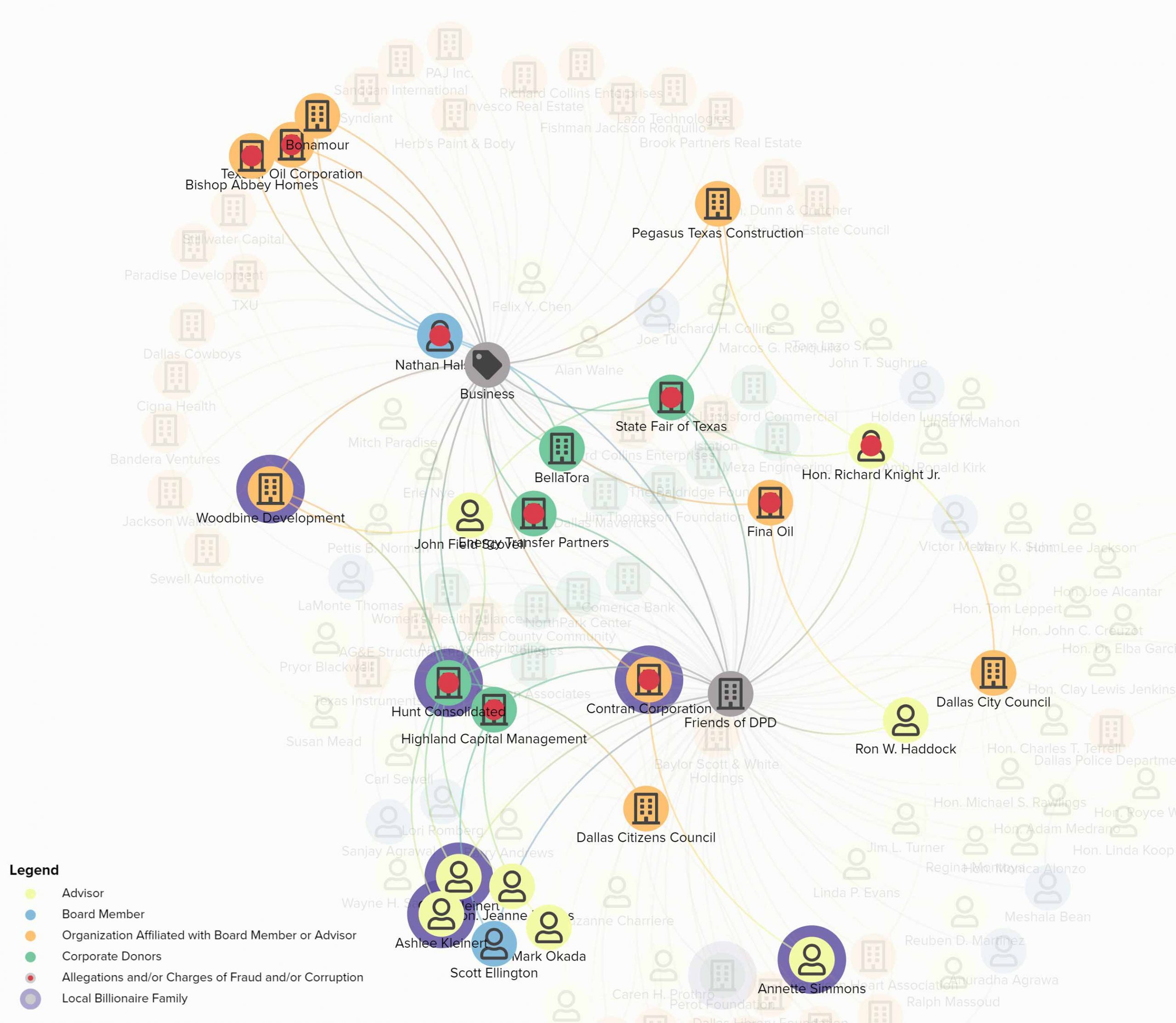 Over the course of our analysis, we identified a number of fraudulent businesses lawsuits and allegations tied to the Friends of The Dallas Police’s board members, advisors and their affiliated companies.

Most notably, the acting president of the board, Nathan Halsey, is currently under investigation by the SEC for fraudulent investment practices. He was also the subject of a $20 million lawsuit over fraudulent business practices related to home construction.

Another board member, Scott Ellington, is affiliated with Highland Capital, which also happens to be a corporate sponsor of the organization. In 2008, Highland Capital underwent a controversial bankruptcy proceeding, in which it was alleged that Highland Capital moved money to the Cayman Islands as a means of protecting it from potentially being clawed back in court. Highland Capital has been dogged by a number of legal controversies for years.

A recently deceased advisor, Richard Knight Jr., was also alleged to have participated in corrupt business dealings. Prior to his death, he was board chairman for the State Fair of Texas as well as the chairman for Pegasus Texas Construction, which the City of Dallas has contracted with for millions of dollars. From 1986 to 1990, he was the first Black city manager of Dallas. Throughout his life, he faced numerous allegations of conflicts of interest and corruption.

Other entities involved in the Friends of The Dallas Police with long histories of lawsuits include Energy Transfer Partners (associated with the controversial Dakota Access Pipeline), FINA Inc (a storied oil company related to a board member that settled for a whistle-blower lawsuit in 2012) and Hunt Consolidated (See: Family Ties). 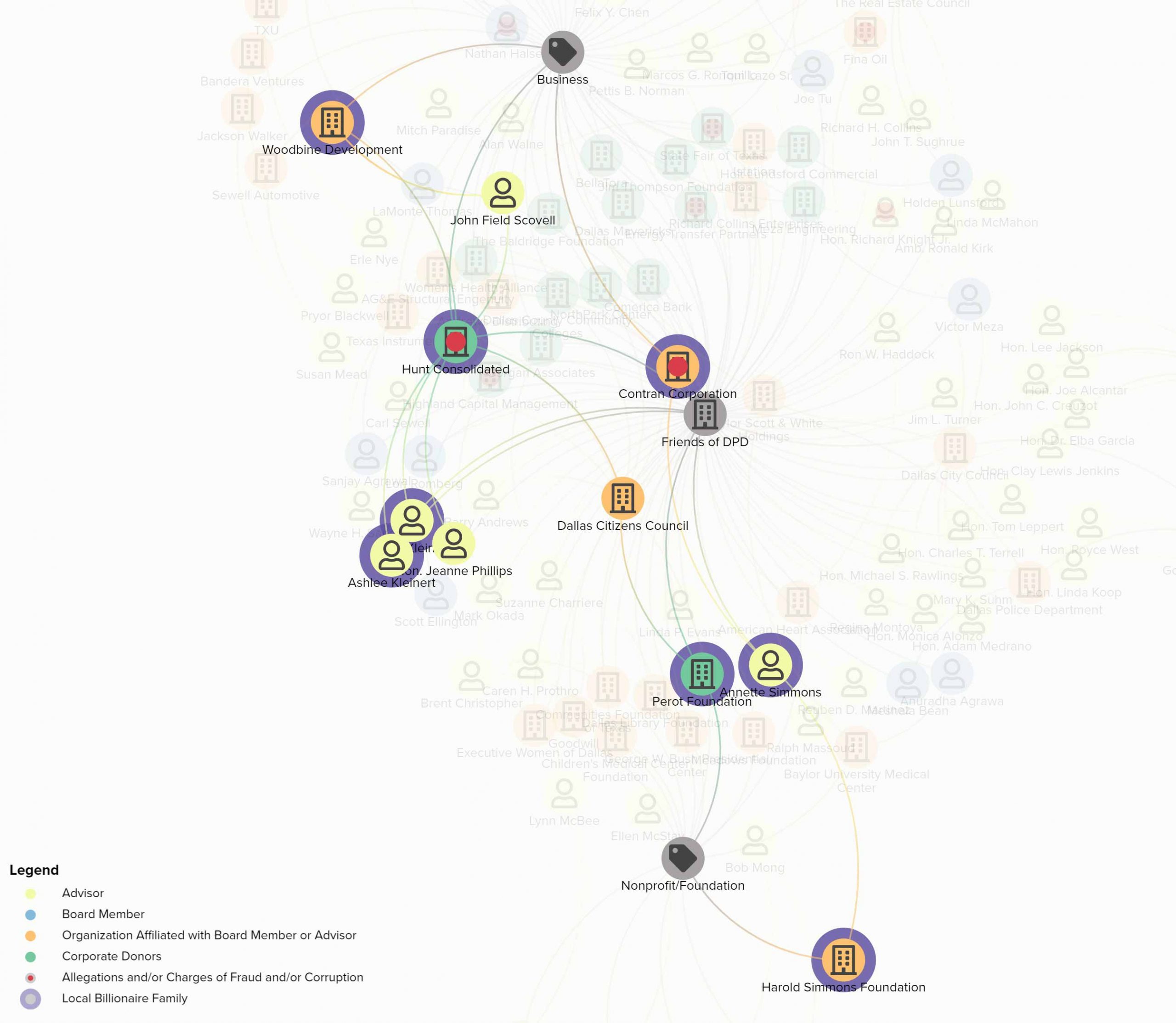 Another striking element we uncovered in our map was presence of three Dallas-based billionaire families in roles as advisors or financial sponsors.

A number of the Friends of The Dallas Police’s advisors and board members are affiliated with Hunt Consolidated, a multi-billion dollar holding company founded by oil tycoon R.L. Hunt. Hunt Consolidated is Friends of The Dallas Police’s corporate sponsor, and has been entangled in a number of controversial lawsuits in which it has been accused of fraudulent business practices, some dating as far back as a 1984 case reported by The New York Times regarding the Hunts’ oil mining efforts in Yemen. Among the Hunt family members involved in this police organization: Daughter Ashlee Kleinert (nee Hunt) and her husband Chris Kleinert, who is presently the co-CEO of Hunt Consolidated; an employee of theirs, the former ambassador Hon. Jeanne Phillips; and a former employee and business leader of another Hunt-owned company, James Field Scovell.

A member of another less widely known billionaire family, Annette Simmons, also sits on the board. Her philanthropic work with the Harold Simmons Foundation is informed by her majority stake in the Contran Corporation, a multi-billion dollar holding company whose founder, Harold Simmons, was dubbed Dallas’ “most evil genius” by D Magazine, and whose corporations have been caught up in a number of controversial lawsuits.

The Perot family is also linked by way of the Perot Foundation. Notably, a former Perot property is also a corporate sponsor: The Dallas Mavericks. 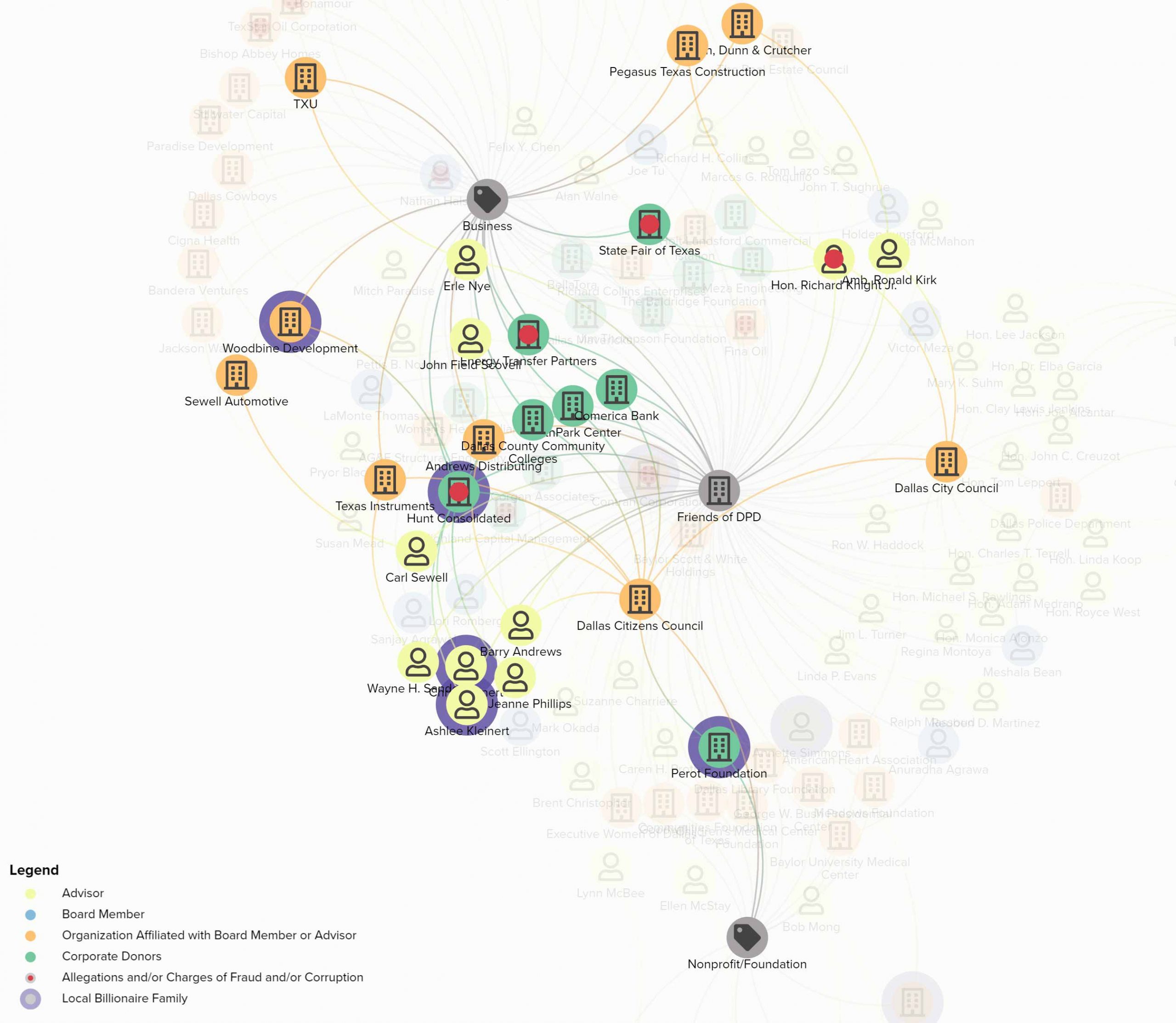 Several individuals and organizations affiliated with the Friends of The Dallas Police also sit on, or have employees that sit on, the Dallas Citizens Council.

The Dallas Citizens Council is “comprised of the area’s CEOs and top business leaders who provide guidance on the policy issues that will move Dallas forward and serve in the moments that matter the most for the city.”

Charitably, it’s a policy lobbying group. Far more critically, it has been dubbed the “shadow government” of Dallas. Indeed, it was founded by the controversial R.L. Thornton, and it proudly lists a timeline of its major accomplishments on its site. (Notably, it lists founding a committee on racial housing disparity in 1950 and holding meetings desegregation in the 1960s, but did not have a black member until 1981.)

At one point, the Citizens Council was led by Ray Hunt, of the aforementioned Hunt oil fortune.

Several of the aforementioned individuals and organizations are past or present members of the DCC, namely: Richard Knight, Jr.; John Field Scovell; two members of the Hunt family; and one member of the Perot family.