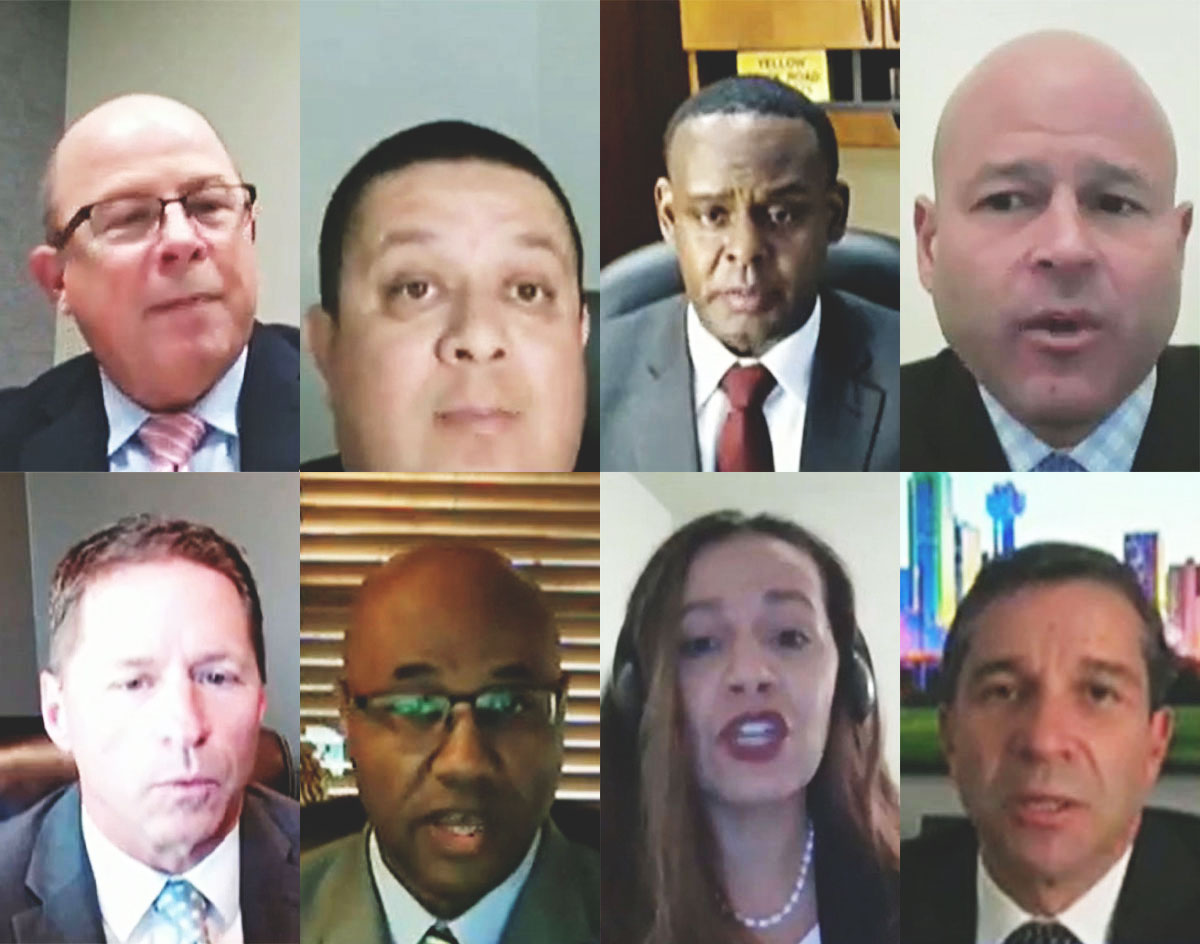 We Watched All 3.5 Hours Of Wednesday’s Forum With The Finalists For The Dallas Police Department’s Open Chief Gig. Here Are The Impressions We Got.

After having formally announced last week the seven finalists it had selected in its search to replace the now-former Dallas Police Department Chief U. Renee Hall (Dallas Assistant Police Chief Lonzo Anderson became interim chief on December 15), the City of Dallas hosted a public forum with each candidate for the gig on Wednesday, December 16.

Moderated by Gary Peterson of Public Sector Search and Consulting, the outside consulting firm hired to help conduct the search, the forum lasted 3.5 hours — and has already earned more than 3,600 views in less than 24 hours, making it the most-watched upload to the City of Dallas’ YouTube page in more than three years.

Like our fiends at D Magazine, who were mostly impressed at the overall progressive tones laid out by the finalists, and our colleagues at the Dallas Morning News, who presented their own well-detailed recap of the proceedings, we too spent the bulk of our Wednesday following along with live feed.

What did we learn? Well, read on to see.

As for when we’ll find out who gets picked for the role: City Manager T.C. Broadnax, who is solely responsible for the hire himself, is expected to make that call by the end of this month. (Rest assured, we’ll pass along word of his decision as soon as it comes down.) 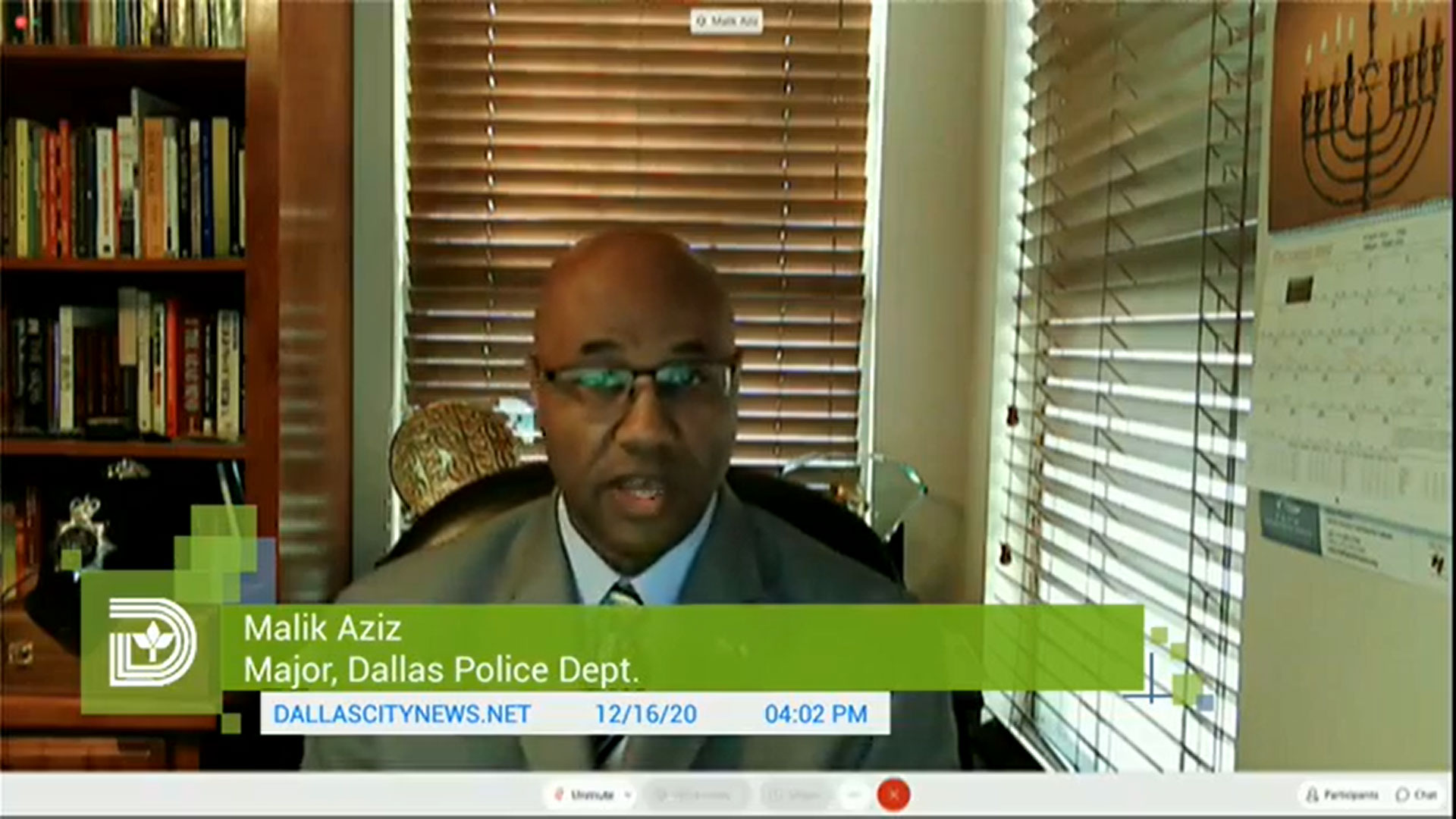 Overall impression: If Broadnax is listening to the public, he has to be hearing the cries for an internal hire, and he certainly has a sense of the faith that community activists and advocates are alike placing in Aziz by saying he’s their top choice. The fact that he was a finalist for the gig back when Hall was hired too certainly works in his favor. Overall, Aziz performed fine in this setting, very much pitching himself on intimate community familiarity, first and foremost. That strategy worked out well enough for him, although it’s tough to say if he gained as much ground as other candidates may have during the forum. Perhaps more important, though, the clubhouse leader also doesn’t seem to have given up any ground on Wednesday. Mostly, Aziz came off as calm, cool and collected — and open to expanding upon some recent department reforms.
In a nutshell: Local, local, local. Born in West Dallas and a graduate of Carter High School (and later UT-Arlington), Aziz knows the city well as a native son.
Surprise of the day: Malik made sure his camera angle was wide enough so that the Jews of Dallas could see the menorah on his desk calendar.
Zoom room grade: A. (See above)
Gilmore Girls character comparison: Luke.
Odds of being hired: 3-1. 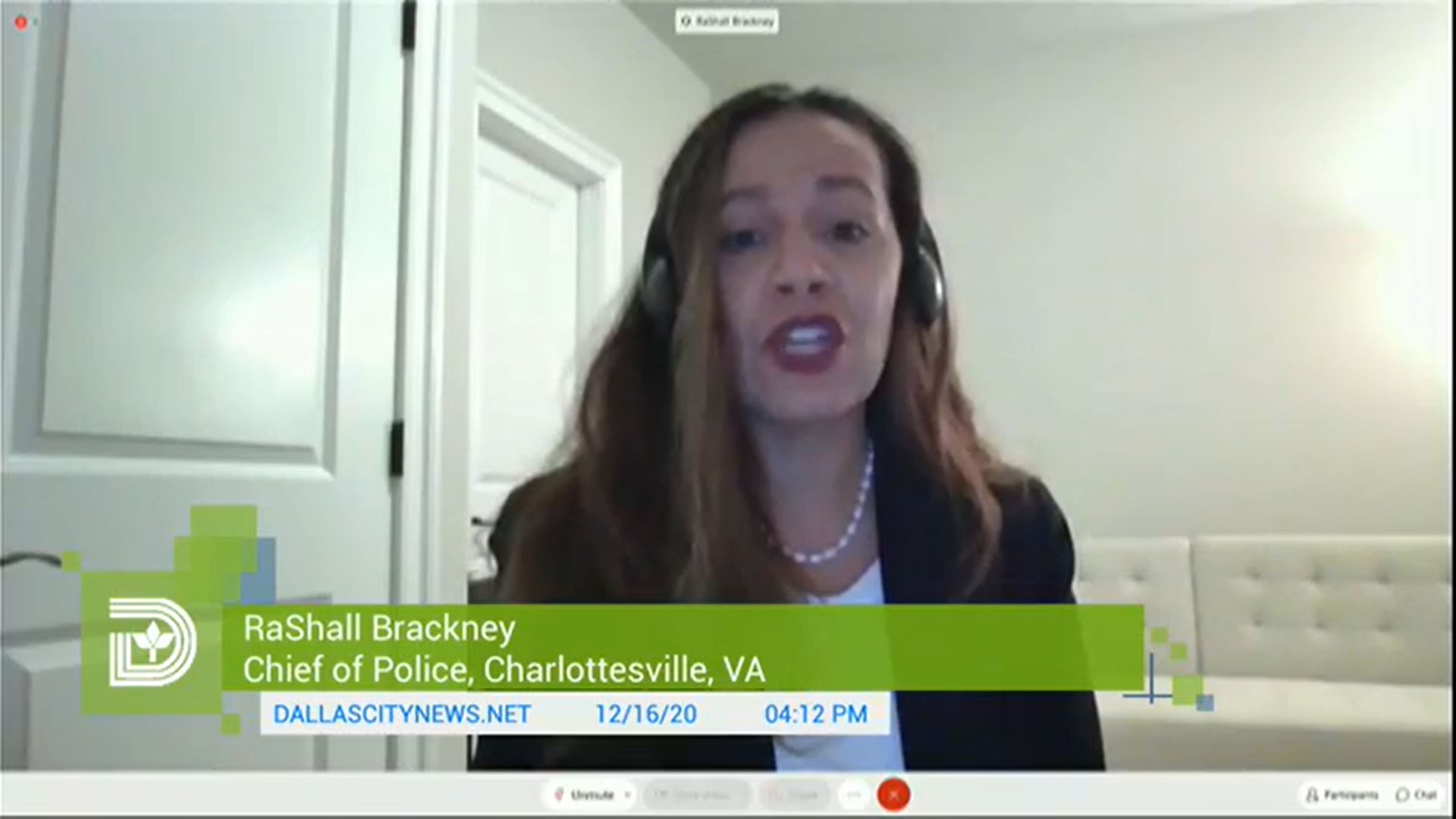 Overall impression: Brackney’s got an impressive resume, and she was one of this forum’s clear top performers. Speaking eloquently and presenting progressive ideas, she definitely came off as the most academic of the candidates — which makes sense as the former Chief of Police of George Washington University boasts BS (2009) and Masters (2011) degrees from Carnegie Mellon University, and a Ph.D. (2017) from Robert Morris University. She is also a graduate of the FBI National Academy and has certificates from Penn State University, The University of Delaware, The Command Institute for Police Executives and the Police Executive Research Forum. Alas, Brackney’s currently embroiled in a scandal in her current role after having demanded that a group of church leaders be fired after publicly criticizing her department.
In a nutshell: The lone female finalist, Brackney is an impressive candidate on paper, but her actions don’t seem to line up with what she preaches. What a classic academic!
Surprise of the day: Honestly, that she performed well enough to keep herself in consideration despite the controversies she’s currently dealing with back at home. And that surprised the hell out of me, anyway.
Zoom room grade: C. Nice depth of field with the camera angle here, but a white couch in a stark white room is a weird design touch.
Gilmore Girls character comparison: Paris.
Odds of being hired: 10-1. 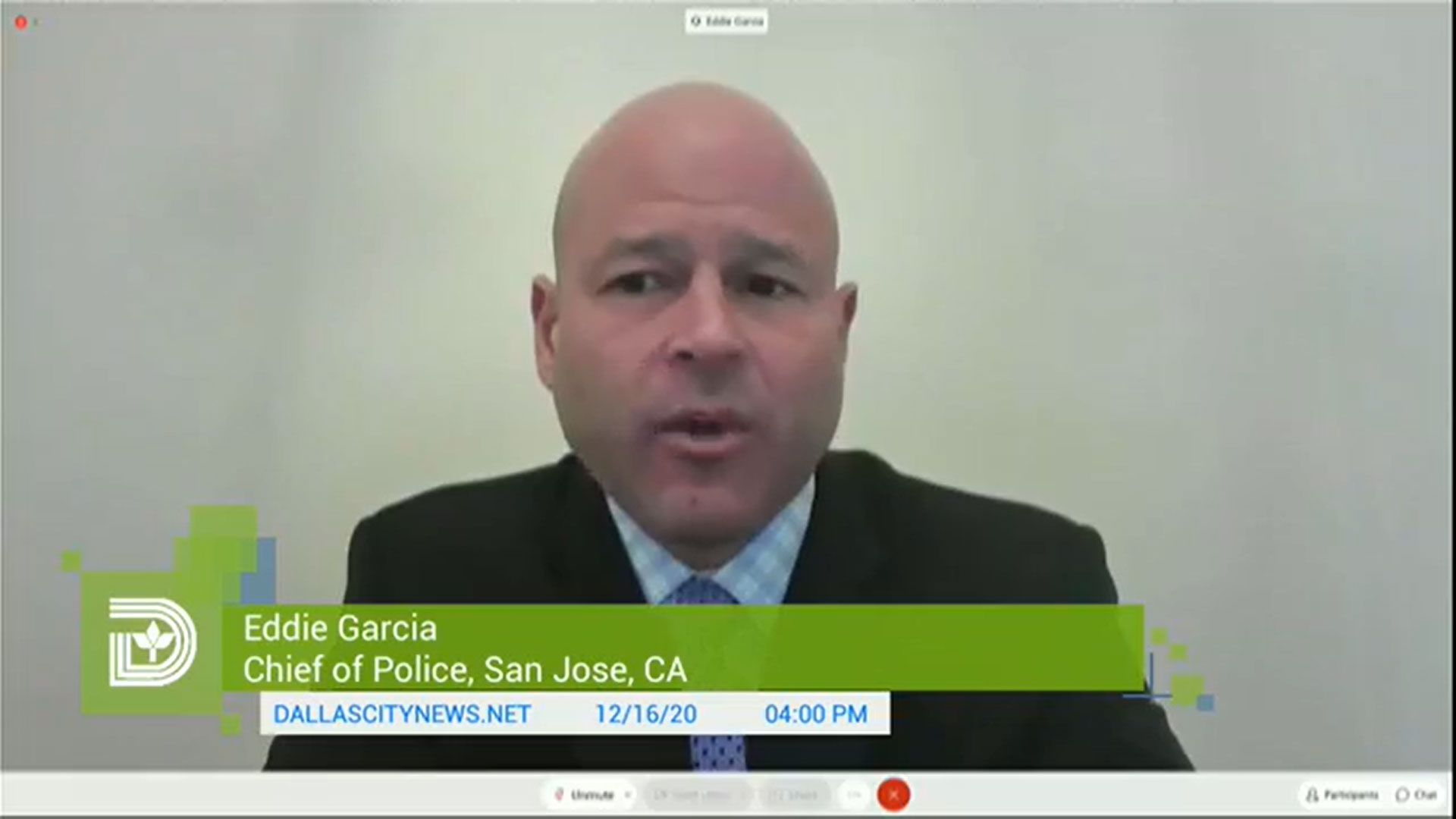 Overall impression: Garcia performed really well in this setting. He looked excited to be there, he had a solid grasp on the issues modern policing faces, he acknowledged his weaknesses alongside his strengths, he appeared openminded to new ideas and, most importantly, he did his homework. With four of his competitors in this search having deep Dallas ties and another being from a neighboring city, Garcia clearly wanted to present himself as not just another outsider. He managed to do that, too: Throughout the forum, he confidently referenced specific city neighborhoods and issues with the department that he’d read about in the press.
In a nutshell: If I wasn’t convinced that DPD’s next chief would be coming from one of its internal candidates, I’d think Garcia won himself the job on Wednesday.
Surprise of the day: In his closing statement, Garcia went on a pretty charming monologue about how much he loves the Dallas Cowboys, and how he adores North Texas so much that he plans on retiring here whether he gets this gig.
Zoom room grade: B-. I guess Garcia wanted to paint himself as the “blank slate” finalist.
Gilmore Girls character comparison: Lorelai.
Odds of being hired: 7-1. 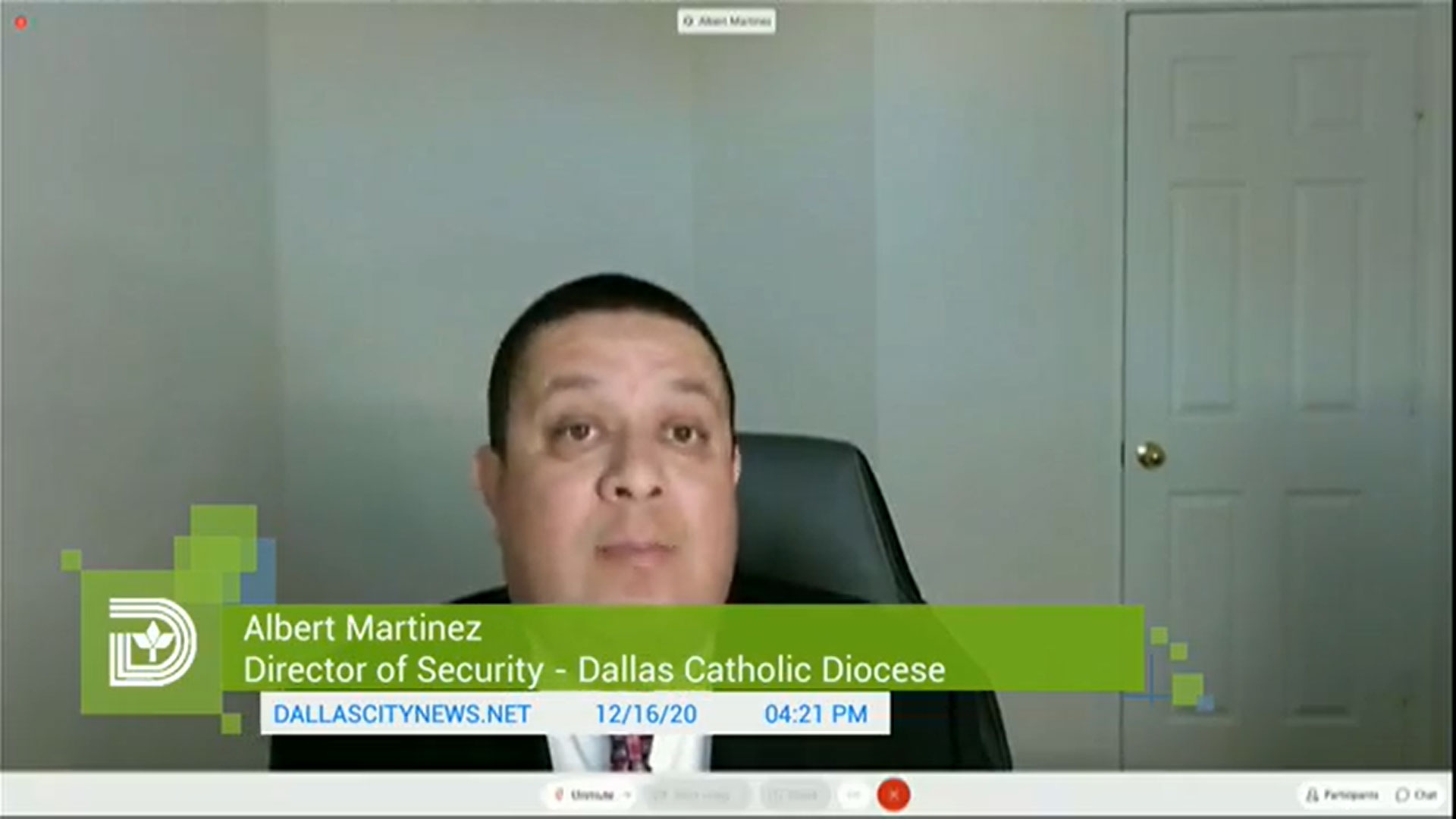 Overall impression: Martinez did fine, although his overall performance came off as a little too low-energy. He really didn’t stand out from the pack at all, and his criticisms of DPD rang a little hollow considering that he recently left the department after 27 years for another gig in town. Weird, then, that he never directly detailed his decision to make that move — or, really, why he wants to now come back.
In a nutshell: For Martinez, it really is an honor just to have been nominated.
Surprise of the day: His camera angle was off all day, with his face too low on the screen and obscured by the chyron for the bulk of these proceedings. It’s weird no one pointed that out to him.
Zoom room grade: D. Along with the above-detailed issue, this is somehow more boring than the other white backgrounds.
Gilmore Girls character comparison: Jackson.
Odds of being hired: 15-1. 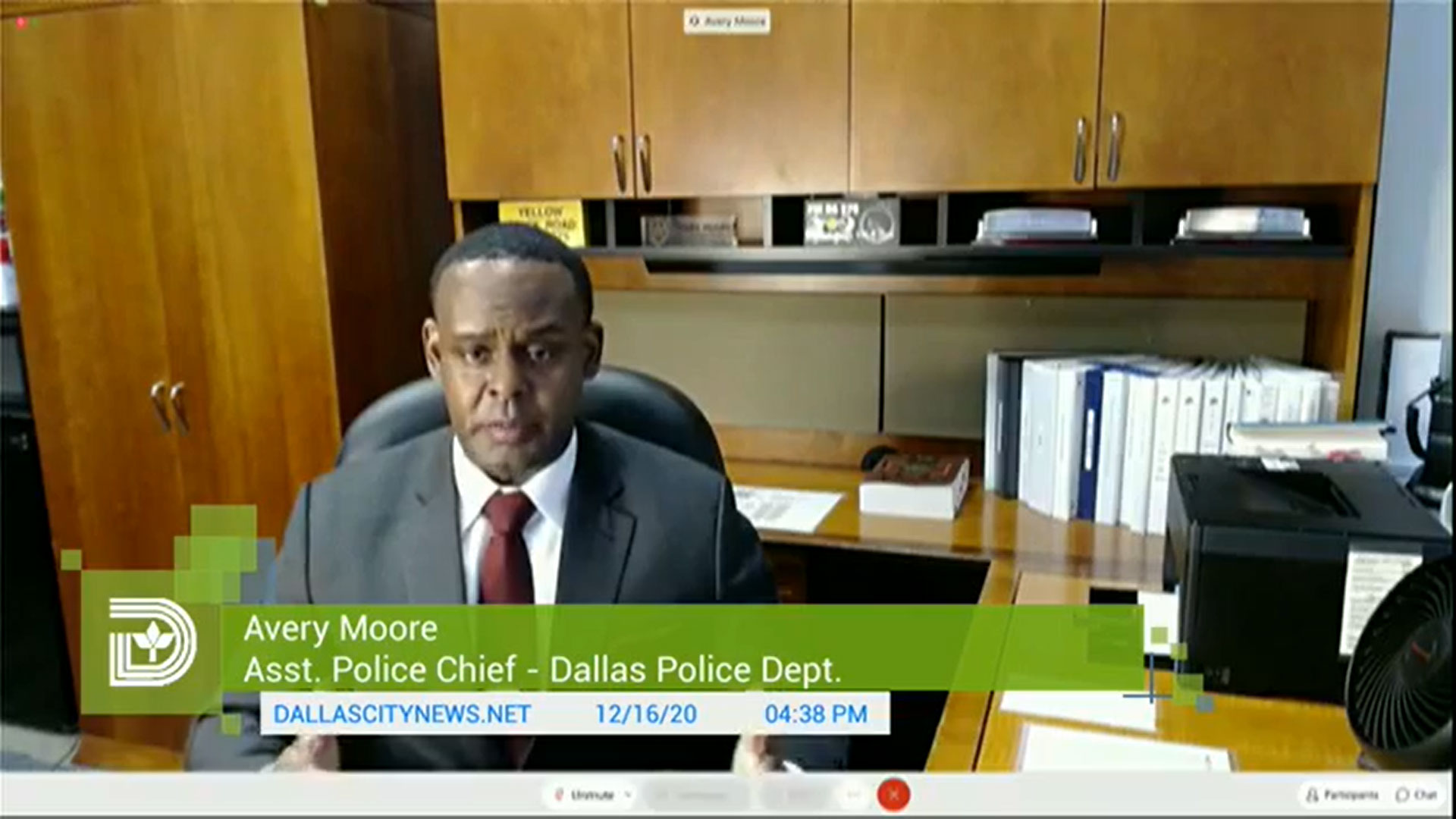 Overall impression: Moore was arguably the most entertaining performer of the day. His opening statement was particularly a hoot, when he used an automobile analogy to describe himself: “I’m like a race car that’s freshly built [and] at the starting line. My engine is large. My tank is full of experience, wisdom, respect, knowledge and honor. And I’m waiting on the starting pistol to being my career as chief of police for the Dallas Police Department.” Like Aziz, he also heavily harped on his experience in the city, repeatedly citing his 30 years within the department. One curious thing: Maybe he was intent on answering questions in the moment, but Moore repeatedly had to be reminded what the later aspects of multi-part questions were, whereas his competition generally seemed to write down each question as it was asked. But, hey, at least he asked and made sure to answer everything!
In a nutshell: Moore has a lot of things going for him, and we suppose he would make a fine hire. But he didn’t necessarily establish himself as a slam-dunk candidate during this forum, even if he did come into it with the best pre-written quotes.
Surprise of the day: While answering a question of how he would handle duties as a manager, Moore cited New England Patriots coach Bill Belichick as an influence and referenced a mantra repeatedly used in his locker rooms: “Do your job.”
Zoom room grade: B+. It’s pretty clear that Moore is calling from inside his current DPD office, which is a decently strong message to get across.
Gilmore Girls character comparison: Kirk.
Odds of being hired: 5-1. 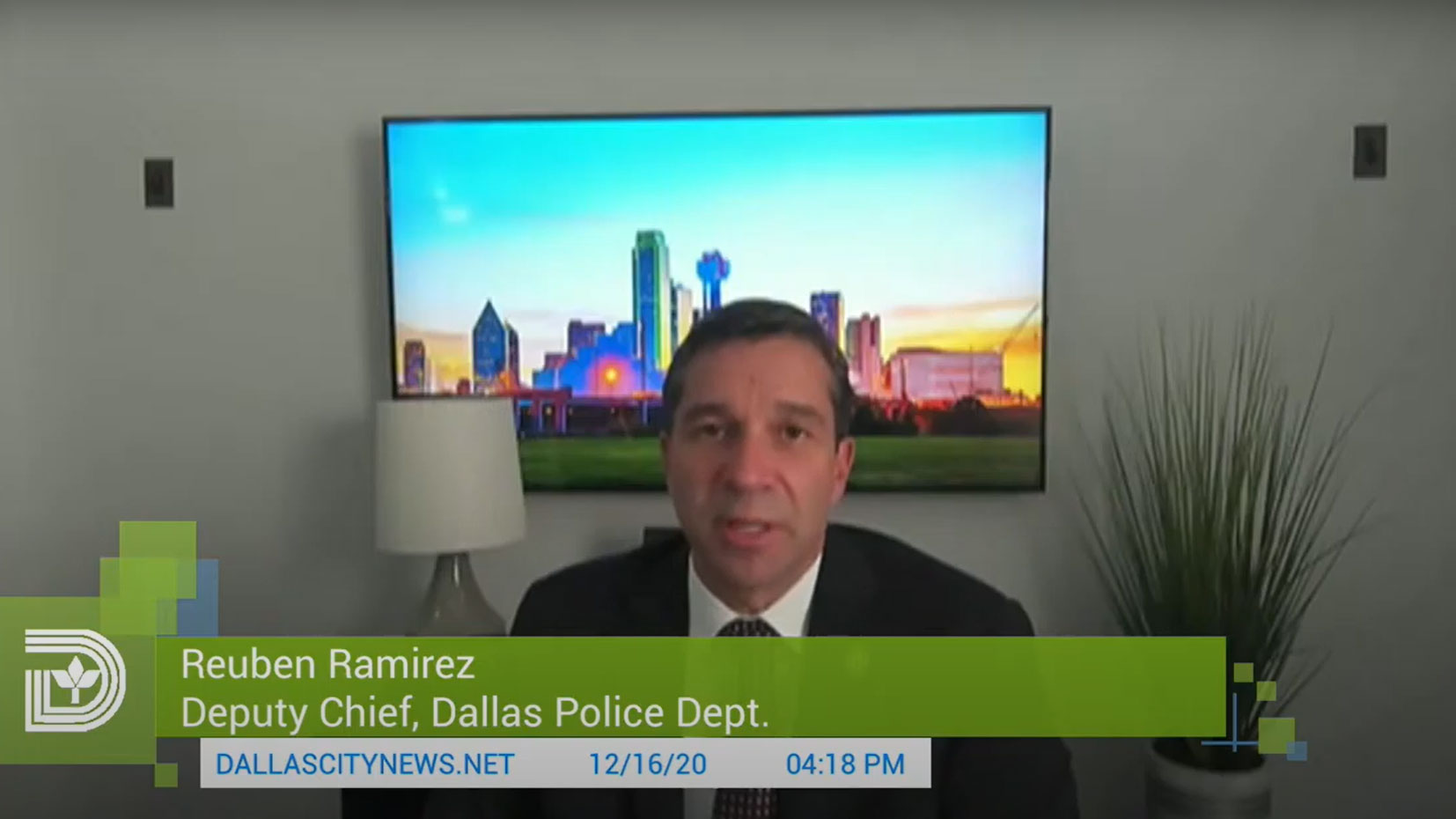 Overall impression: The youngest of the finalists, Ramirez presented himself well in this setting. He was well-spoken and reasoned, and his answers generally came with specific details to back up his positions. He repeatedly cited his past experiences as the department lead in the violent crimes and internal affairs divisions, but was perhaps too mired in the lessons learned there. Asked how he would curb violent crime in the city, Ramirez was laser-focused on ridding the city of known drug houses. He’s not necessarily wrong about that being part of a sound strategy, but other candidates’ answers on that question felt more well-rounded. Overall, he did pretty well. Along with Garcia and Brackney, he came off as one of the best media-trained candidates. For better or worse, that’s an important quality for a police chief.
In a nutshell: Ramirez will make a great chief one day, but it probably won’t be here in Dallas — or not immediately, anyway.
Surprise of the day: Just how media-trained he appeared, I guess.
Zoom room grade: A. The plant and lamp are nice touches, but the real gem here is that he positioned himself in front of a TV projecting an image of Dallas’ skyline. We see you and we recognize you, Ramirez.
Gilmore Girls character comparison: Rory.
Odds of being hired: 8-1. 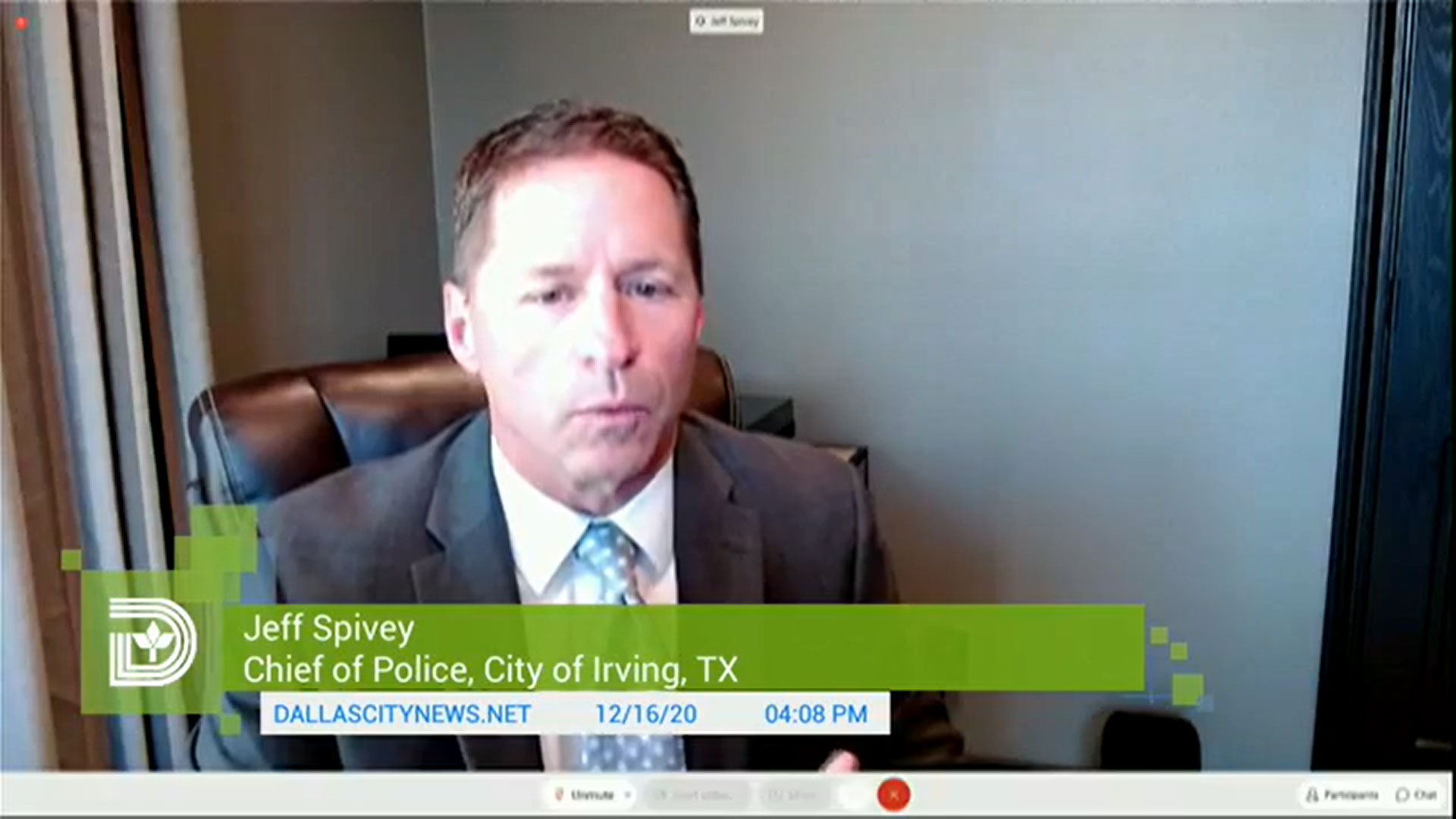 Overall impression: Boring. Spivey did absolutely nothing to position himself as an attractive hire here. Worse, his monotone answers didn’t really give off the impression that he particularly was excited about possibly getting the gig, either. The most interesting thing he said all day was in response to a question about how many languages he spoke; when answering that he only speaks English, he noted that it’s never been a problem for him in his current role within a city whose residents — and I don’t know if this is all that impressive, but it sounds it at first blush — speak more than 80 languages. Way to go, Irving! Anyway, I’m sure Spivey is a fine steward in his current role, where the default create-a-character from a video game can suffice as police chief.
In a nutshell: In an interesting look at societal progress, you could make the case that Spivey was the token inclusion here.
Surprise of the day: Literally nothing.
Zoom room grade: C. As with everything else we got from Spivey on Wednesday: A big meh.
Gilmore Girls character comparison: Dean.
Odds of being hired: 30-1. 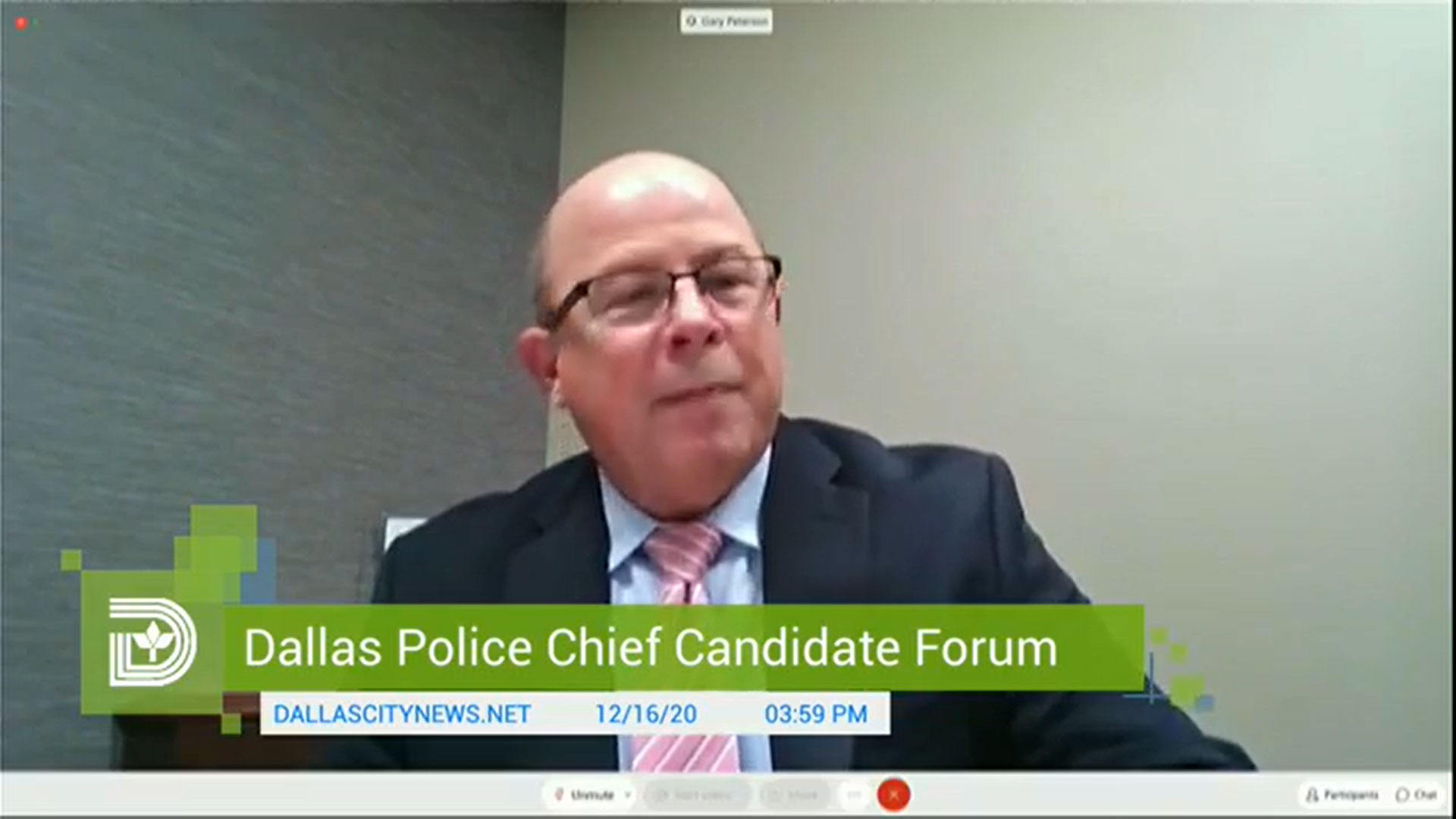 Overall impression: I mean, whatever. With 26 years under his belt as a cop and the onetime Chief of Police for the City of Martinez in the San Francisco Bay Area, it’s perhaps not a surprise that Peterson didn’t really push back on any of his candidates and serve up anything but softballs.
In a nutshell: Police can’t police police.
Surprise of the day: Despite his firm being paid handsomely to conduct this search professionally, Peterson forgot to let Martinez offer up an answer in second round of questions. He caught the mistake later and gave Martinez some extra time to address the question, but jeez. This is what we paid for?
Zoom room grade: C-. Nice to know that police hiring consultant offices look a lot like the inside of any modern police building, we guess!
Gilmore Girls character comparison: Babette.
Odds of being hired: 100,000,000,000,000,000-1.