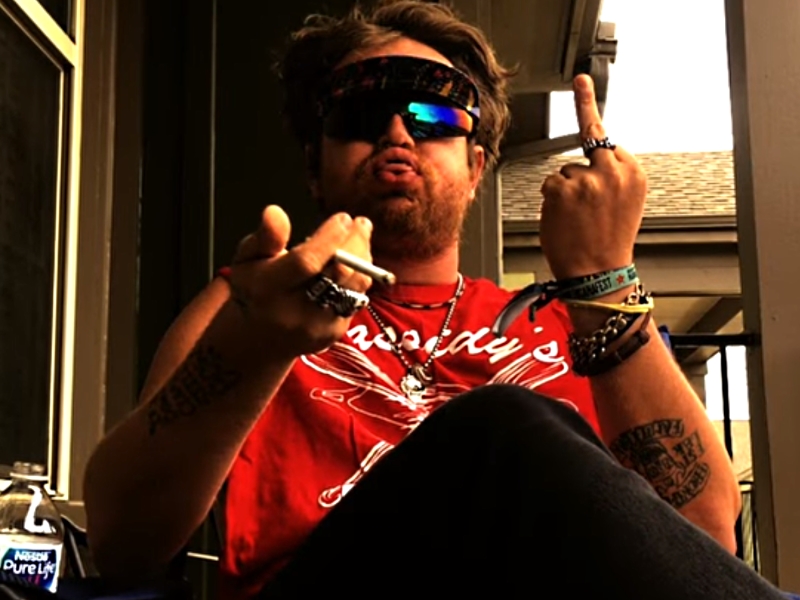 Dalton Domino Is Accused Of Cyberbullying, Power Trip Takes On The Alt-Right, So What?! Music Fest Is Taking A Break And Plenty More Dallas Music News.

The recent trend of calling out male entertainers on their bullshit behavior has finally touched the area’s music scene: After a recent show at non-smoking Amarillo venue Hoot’s Pub where Lubbock-sprung Texas country singer Dalton Domino recently repeatedly lit up on stage, he’s now being accused of cyberbullying.

The day following the performance, an angry, asthmatic fan took to Domino’s Facebook page to air her grievances, saying that she had to leave the show after the first song because of Domino’s smoking.

Domino’s response? A pointed “Go fuck yourself.” But, as Wide Open Country points out, the exchange didn’t stop there. Follow-up exchanges saw Domino calling the fan’s son “a pussy” and several of his fans later joined in on the action, posting threats to her personal page.

From there, another set of fans manufactured a line of limited edition shirts with the phrases “#letdaltonsmoke” and “go fuck yourself” on them. While Domino indicated sales of the items would go to benefit the Dallas-area non-profit United Through HOPE, the charity replied by saying it wasn’t sure it would be accepting the cash on account of their not “[wanting] anyone to think we accept name-calling or [finding] rude behavior to be acceptable.”

So, after all this, Domino handled the situation by doing what he does best: B Writing a song. The tongue-in-cheek (?) new track doubles down, letting listeners know he’s “no role model” and that others can go fuck themselves. You can check it out below.

Of course, that’s just the tip of this week’s online beef iceberg. Local thrash heroes Power Trip got themselves in an arguably even higher-profile spat this week on Twitter against Vice co-founder/right-wing provocateur Gavin McInnes and his group of self-described “Western Chauvinists” known as the Proud Boys. Depending on which side is to be believed, the parties involved almost came to blows at a recent show, but one side or the other chickened out. Though many of the tweets between McInnes’ account and Power Trip’s have since been deleted, surviving blows find McInnes deriding Power Trip for being “a politically correct thrash band,” and the band supposing that the racist blowhard “sleeps with a fist up his ass.”

How’s that for politically correct?

In some more positive news for the band, Power Trip’s “Executioner’s Tax (Swing of the Axe)” will be the official song of WWE NXT Takeover: WarGames, which kicks off Survivor Series Weekend at Houston’s Toyota Center this Saturday.

Continuing with the running conflict theme, South Dallas’ Latino “mega club” Far West is in hot water after it stopped paying fees to music licensing organization ASCAP while continuing to blast copyrighted music in its building. It is now being sued in federal court by the pissed performing rights organization.

Elsewhere in the club world, we now know that, before The Door leaves Deep Ellum in December, it’ll host one last blowout with headliners Oh Sleeper. A limited number of $5 tickets to the December 30 show are currently on sale here. Once they go, any tickets that might remain will cost $1 on the day of the show.

Of course, likely won’t be the last you see of The Door. Aside from the fact that its owners have already touted plans to reopen in a different neighborhood sometime next year, things just don’t seem to stay dead forever around these parts.

Take beloved hip-hop duo A.Dd+, for instance, which will rise from the ashes next weekend to play its first full set in nearly two years (in August, you may recall, the duo for a brief appearance on a bill at Club Dada). The performance will come on Saturday, November 25, where they’ll share a bill alongside Bodega Brovas and Bobby Sessions as part of a stacked RBC show. It’s perhaps noting, too, that RBC has risen from the ashes itself a time or two in its day.

Moving on, a whole slew of new videos debuted this week. Let’s take a look, yeah?

First up is another new single from Andy Pickett’s next-week-due sophomore record that’s produced by and features members of White Denim along with Jordan Richardson on drums.

Another long-anticipated clip comes from Kaela Sinclair. Just in time for her appearance at this weekend’s Oaktopia Festival, the newest member of M83 dropped the first of three planned mini-albums. The lead track from her We Watched the Lights Go Out EP – which features contributions from Midlake’s McKenzie Smith, Daniel Hart and Polyphonic Spree members Buffi Jacobs and Evan Jacobs — got the video treatment this week.

Meanwhile, Midnight Opera is continuing its lock on the title of the Dallas band with the best grasp on the visuals game, which applies to both its live shows and its stunning, cinematic video clips. This new one, for the track “Chromatose” was directed by band member Nicole Marxen-Myers’ husband Judd Myers.

Not to be outdone, longtime Dallas favorite Sarah Jaffe released a new video herself this week as well. Her Bad Baby track “No Worries” saw its video premiered via BlackBook this week.

And Dallas ex-pat musician/actor Jonny Boy continues releasing videos from his 2016 project, Self-Titled. The latest is for the song “Shorty.” Check it out below.

Another roll of moving pictures finds St. Vincent hyping the extension of her North American tour – which will find her at The Bomb Factory in the spring – by performing Masseduction cut “Los Ageless” on Ellen. Peep it below.

Lastly on the video front comes one from the they-can’t-all-be-winners department. A clip of “the world’s shittiest band” playing at Denton’s Midway Craft House went viral this week after appearing on eBaum’s World, which is apparently still a thing.

Finally, we’ll leave you with a handful of quick-hitting notes:

• Parade of Flesh’s annual SXSW spillover fest known as NSFWknd has announced that it will return once again in 2018 come March 15, 16, 17 & 18. Pre-sale tickets are currently on sale here.
• On the other hand, Third String Production’s not-quite-spillover fest So What?! Music Festival, which generally goes down at around the same time, has announced that it will not be back this spring, with its future beyond that unclear.
• Following a stroke suffered by Jerry Rutherford, one of their longtime DJs, the folks at Reno’s Chop Shop have organized a fundraising event on his behalf set to take place on December 17.
• Dallas supergroup Motorcade has announced that it will officially release its long-awaited debut LP on January 19.
• Denton folk-rock heroes Midlake received silver records this week after their 2006 album The Trials of Van Occupanther officially surpassed 60,000 sales in Europe.
• And finally, after six years, country singer Zane Williams has announced that he will be ending his Cadillac Pizza Pub residency to pursue “more nationwide opportunities” and “fewer (but bigger and better) shows in DFW.” His last appearance there will go down December 5 .