The Seasonal Dallas Store That Only Sells Ugly Christmas Sweaters. 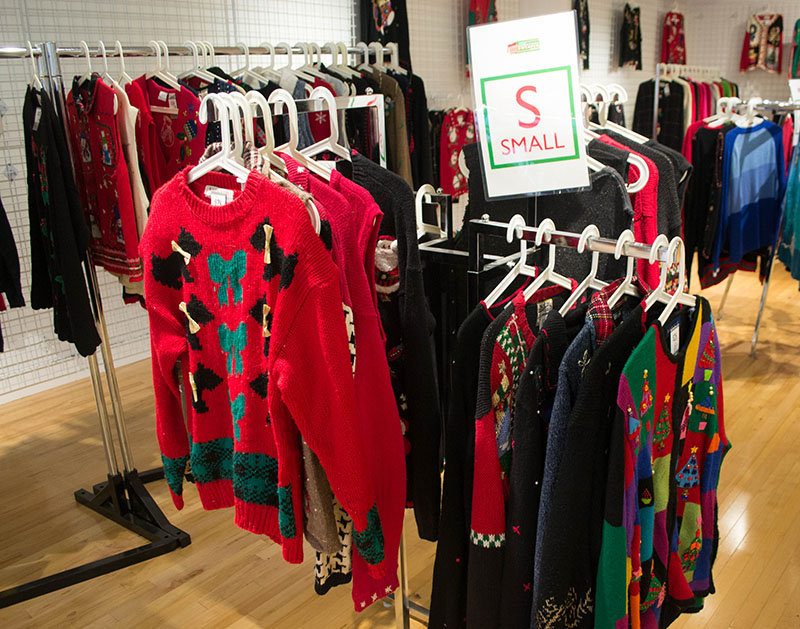 Christmas is that special time of year where everyone gets warm and cozy, buys presents for each other, gets cuffed and has ugly Christmas sweater parties in their parents’ living room.

But one of the hardest parts is finding the right ugly Christmas sweater for a party without just getting lucky at a thrift store. Well, used to be anyway. That was before the Ugly Christmas Sweater Shop came around and began offering up pretty much every style of Christmas sweater you could ever need for that next sweater party to pop up in your Facebook invites.

Business has been so booming for Dallas native Jeremy Turner’s shop concept, in fact, that his brand now boasts three stores across North Texas — one each in Dallas, Frisco and Fort Worth — that are strictly and simply devoted to selling nothing but ugly Christmas sweaters.

As you can see, Turner is all about these sweaters, which is why we recently caught up with him to talk shop and find out and why he decided to jump into such a venture. Here’s what he had to say.

How did you get started with this concept?
Back in 2011, I had started a mobile vintage clothing store called the Vintage Mobile. This is really around the time that food trucks were first really becoming a thing in Dallas. They were incredibly popular. Around that time, I was just wanting to do something different with my work. I wanted to do a vintage clothing store, and a few weeks after I thought of the idea, I knew I wanted to do it mobile. In December of that year, I started selling Christmas sweaters. I saw how popular they were, but they were incredibly hard to find. I thought ‘Man if I could figure out how to find these things, I could make a Christmas sweater store.’ Two years after I thought of the idea, I launched the first Christmas sweater shop. It was in December of that year. I was buying vintage clothes from this guy that was in the business for a long time. He had this big pile of Christmas sweaters at his house. I started to buy a couple from him. They sold them almost instantly the next day. They flew so fast. People were coming from all over the Metroplex to find these Christmas sweaters. 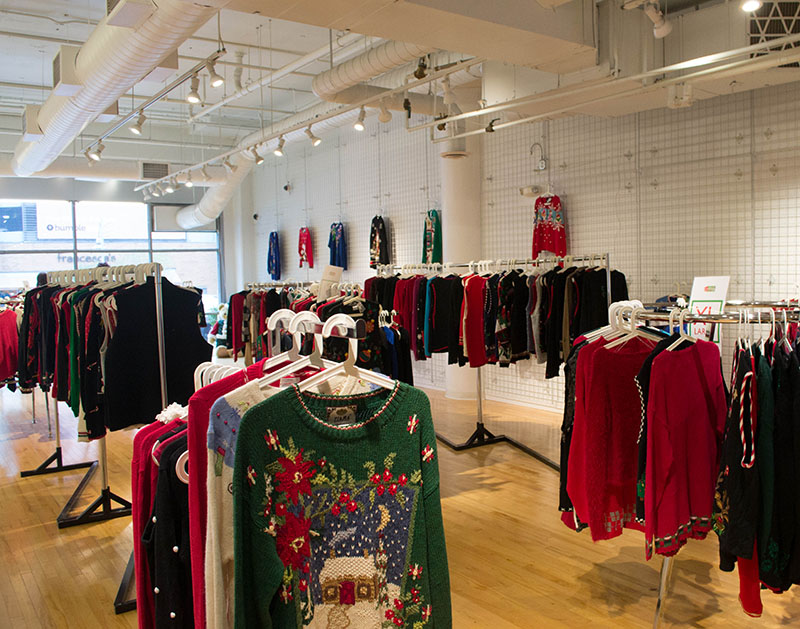 What made you think of such a niche sort of branding like this?
It felt so natural. I really like vintage clothes. I was really into thrifting when I was a teen, so I’ve always been into it. Through that, I found out about the craze for vintage Christmas sweaters.

How do you go about collecting the sweaters?
I really can’t say where I get them. That’s like asking a chef, ‘What’s in your secret sauce?’ It wouldn’t be as special. I definitely am collecting them all year round. No one else is really thinking about Christmas [the rest of the year], but I’m buying these all year round.

Now, the first location was on Mockingbird?
We’ve been at Mockingbird and Abrams for a couple of years. This year we decided to go to Mockingbird Station. I did the Dallas store three years in a row as one store, and last year in 2016 I grew it to three stores. Looking back, it was kinda crazy. It wasn’t really a slow growth. It had a lot of challenges, but I’m really glad I did it. I had a really awesome team that helped with the growth. It definitely wasn’t just me.

And the other two stores are in Fort Worth and Frisco. Why those locations?
The Metroplex is so big, and I knew I wanted to grow the store. I always had my sights set on New York City, and it just seemed like that was a little crazy to start by doing the second store in NYC. I thought it would be better to grow it locally as opposed to nationally. DFW is just so big, that I felt like I was able to do multiple stores here, and it would still be a unique thing. I wouldn’t want to have 50 sweater shops in area. It made sense to do Ft. Worth, and really I made the third store decision really quick. I knew I wanted a third store, but it was such a quick jump. Frisco seemed far from both of those stores, but it also seemed like it was really close to a bunch of other places. I wanted to be somewhere off the tollway. I knew I wanted to go north, so I looked in Frisco. It was a growing place, so it only made sense to me. A lot of my family lives in Frisco, so that’s how I knew a lot about Frisco and getting it started there. In fact, my mom was actually my manager at the Frisco store, so it was really fun having my mom work for me. A really weird dynamic. [Laughs.]

So when you’re not managing the stores and making ugly Christmas sweater music videos on YouTube, what do you do in lull of the holidays?
So this year, all the stores have opened within the last seven days, and they close by Christmas Eve. I’m an entrepreneur, so a lot of ideas I want to do exist, but it’s just a matter of when I do them. I’m always coming up with ideas. I’m collecting sweaters, I’m helping my wife, raising the kiddos, etc. The dream for me is to start more businesses. The goal is to not stop where I’m at right now. I want to keep creating new businesses. For me, it’s a creative expression. It’s my outlet. Having small businesses for me is really fun and exciting. I really enjoy the work. 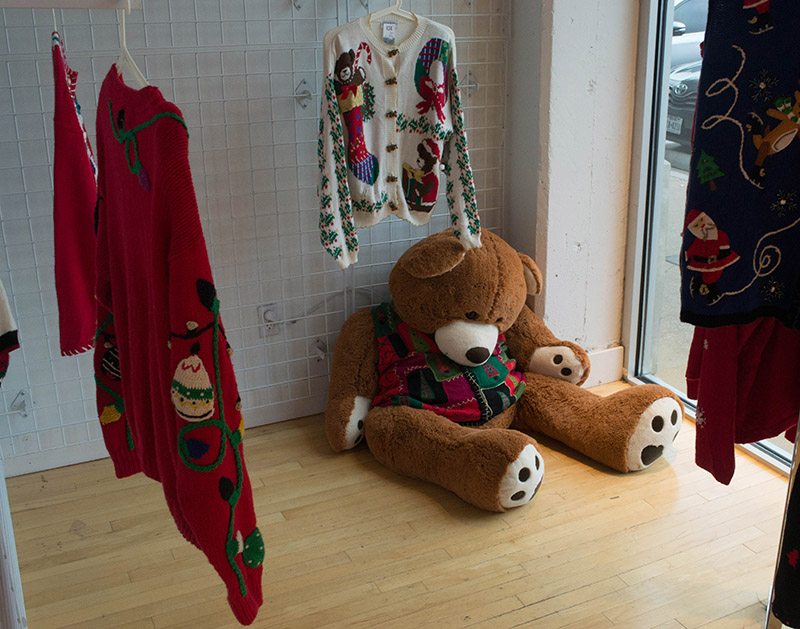 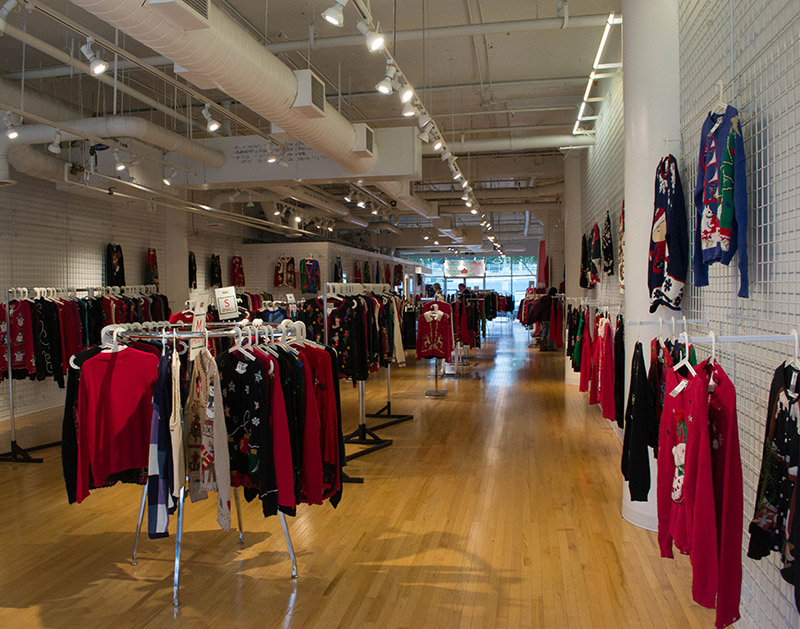 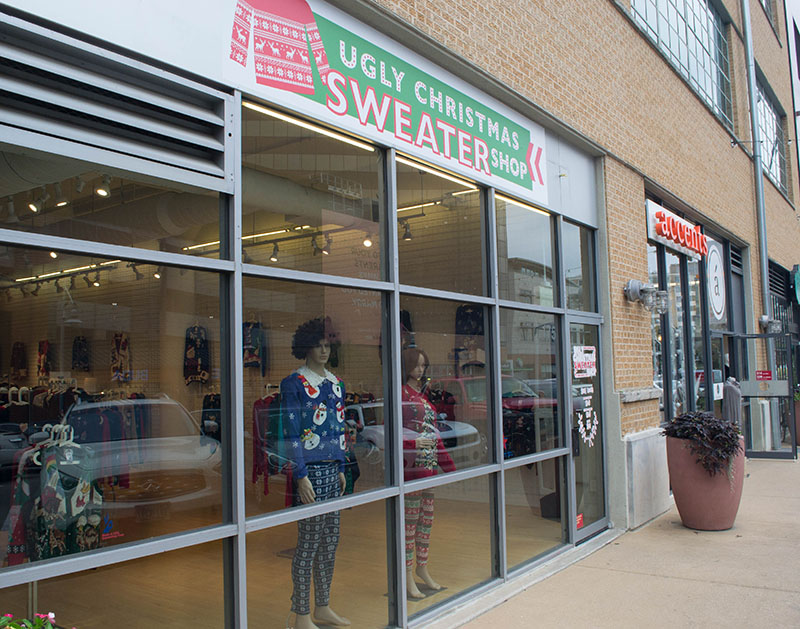