What The Hell Happened At Truth & Alibi Last Night? 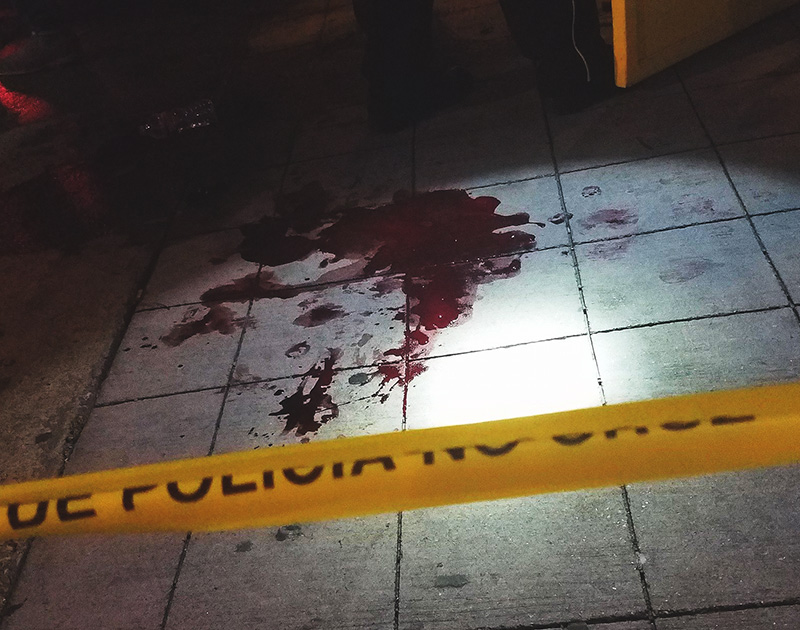 Beyond The Fact That There Was An Apparent Stabbing Outside Of Deep Ellum Nightclub Truth & Alibi, The Entire Scene That Unfolded There Was A Total Mess.

As the bars of Deep Ellum were announcing last call on Thursday night, the car traffic outside of their doors along Elm Street had ground to a halt. Along with the usual revelers-headed-home traffic, even police cars idled along the route — their lights flashing and sirens blaring — with the cops driving them looking visibly frustrated by the standstill.

A little ways up the one-way drag, a handful of cops had already reached the destination that the slower-on-the-jump black-and-whites couldn’t because of all the rubbernecking and logjam caused by it down the street: Outside of the candy shop-hidden speakeasy/nightclub Truth & Alibi located at 2618 Elm Street, they gathered surveying the aftermath of a scene from which an ambulance had already departed. They were joined there by a mass of curious onlookers.

The main attraction? A pool of blood on the ground, just outside of the bar’s front door.

Cops on the scene weren’t too sure what to make of it. One of the more overwhelmed officers seen taking it all in offered what little information he had: There’d been some sort of fight between two customers inside of Truth & Alibi; the scuffle spilled outside into the alleyway that runs alongside the venue’s building; although he wasn’t sure when, it seemed that one of the two patrons had apparently stabbed the other at one point during the confrontation; once it became clear that the victim in the attack had been seriously hurt, the suspect took off running; he was still at large; at some point, someone called 911; the ambulance that had shown up earlier carted the victim off to a hospital; he was still conscious when paramedics took off with him.

Despite the media’s many recent reports that crime is on the rise in Deep Ellum and the close eye that this neighborhood prides itself on keeping upon such activity, the cops who arrived at Truth & Alibi after the fact seemed as genuinely surprised by what they were seeing as the passersby did: “It’s a lot of blood,” one officer said, shaking his head in agreement with an obvious, matter-of-fact observation from one of the onlookers standing nearby. 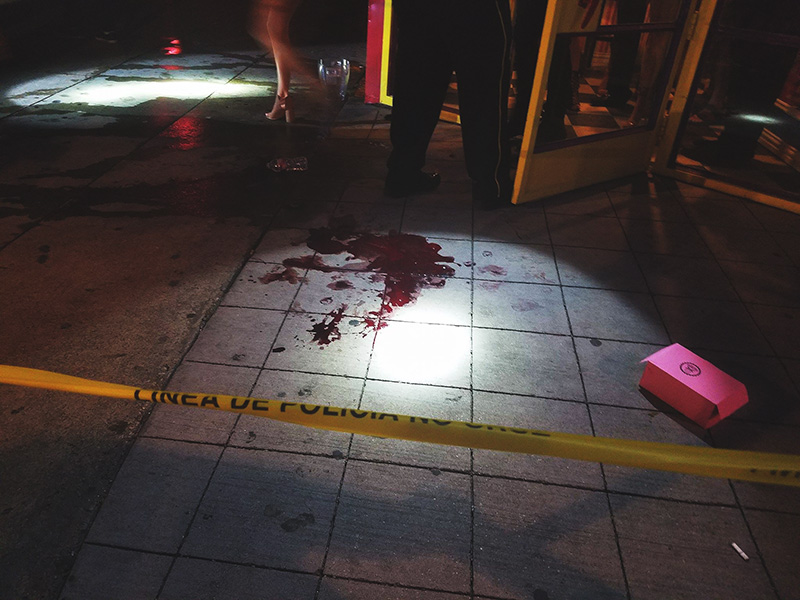 The danger of the situation had long since subsided, but the events that unfolded in its aftermath didn’t exactly elicit confidence in a police force that’s notoriously riddled with plenty of issues at the moment. No fewer than four cops could be spotted standing around the pool of blood, just kind of staring at it and scratching their heads. It took a good five minutes for one of them to realize that he should probably tape the scene off from the public. But after he began to, it became quickly clear that even that effort would prove to be in vain.

At 2 a.m., when Truth & Alibi finally closed and started forcing its patrons outside, they came right out this front door instead of the venue’s secondary exit in the back, which it often employs at this hour. Clearly caught off guard at the stream of people coming out the front door and stepping right into this crime scene, one cop started doing his best to direct traffic around the spilled blood, albeit to varying degrees of success given the inebriation of those hearing his directions. 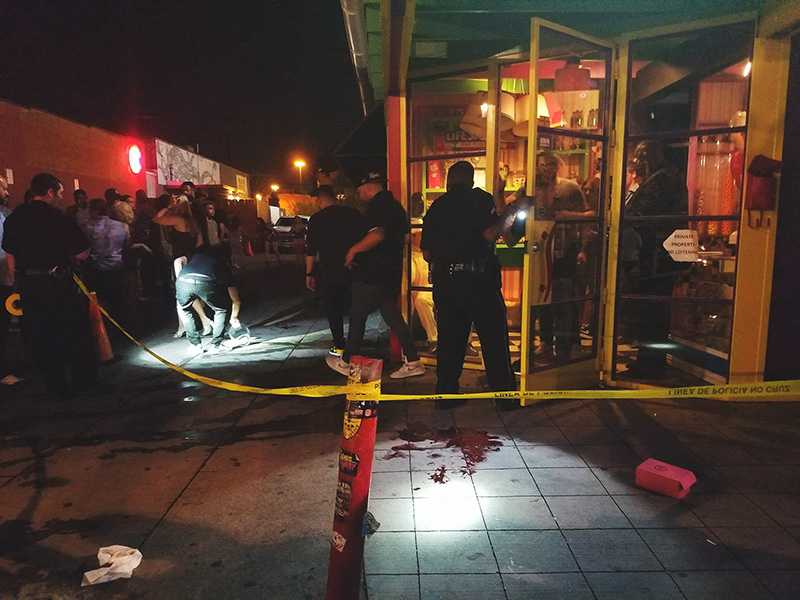 Both literally and figuratively, it was a sloppy scenario, not to mention an almost certain case of blatant evidence contamination — assuming police were choosing to collect any evidence, anyway.

That a takeout box from the nearby Glazed Donut Works was laid on the ground right next to the pool of blood — because of course it was — only further added to the absurdity of the situation.

This morning, DPD issued the following statement about the incident:

On June 30, 2017, at approximately 1:44 a.m., Dallas police officers responded to a cutting/stabbing call at the 2600 block of Elm St. When officers arrived they observed the victim lying on the ground bleeding. The victim was transported to a local hospital by Dallas Fire Rescue in unknown condition. This is an ongoing investigation.

That statement has not yet been updated with any additional details, although CBS 11 reports that the victim was attacked with a broken bottle of some sort and that he is expected to survive his injuries.

In a post to the Deep Ellum Community Watch page, one member of the Truth & Alibi team posted the following, quite deflective update of his own about the situation, denying that a “violent crime” had been committed at the spot despite the police reports and the pool of blood that immediately contradicted his point. 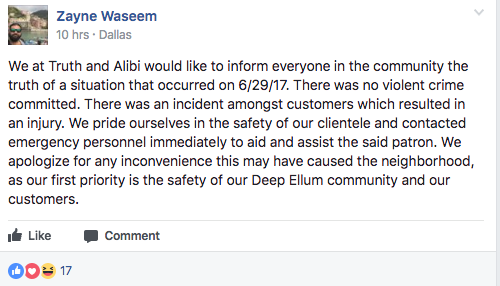 Attempts to contact and garner more information on what happened from the ownership team at Truth & Alibi have thus far proven unfruitful.

Regardless, this much seems obvious: The whole scene was a mess.

Update at 6:20 p.m.: Following this article’s initial publishing, Truth & Alibi co-owner Shea Comer contacted us to deny that a stabbing took place at his venue, passing along security footage that he says backs up his claim. The video shows a five-second, stop-motion clip of a punch being thrown inside of the club, then cuts off. Comer maintains that it shows the entirety of the violence.

“Our surveillance footage shows that no one was slashed with a broken bottle or stabbed,” Comer writes in an email to Central Track. “One patron punched another patron and we have fully cooperated with the Dallas Police Department to catch the suspect. We hope the individual that was harmed has a safe and full recovery.”

In response to a follow-up email, Comer writes that he believes DPD was correct in the statement it issued about the fact that the call they received said that there had been a stabbing. But he says he is unsure why it had been called in that way and says he does not believe the event escalate to involve any stabbings if it moved outside of the venue at a later point, either.

“The footage just shows one punch being thrown by the man in the white hat,” Comer writes. “After that, the victim was helped out by our security staff. You can then see the victim come back to the front door where our staff assisted him and called the paramedics. The assailant fled the scene, and we are cooperating with DPD to help identify him. As for anything happening outside… nothing happened to my knowledge or any of our staff’s knowledge. We don’t have any cameras outside, but we hire off duty police officers, who are stationed outside in our parking lot every night we’re open, because of the sheer volume of traffic that uses our parking lot as a shortcut between Elm [Street] and Main [Street]. They didn’t report seeing anything outside either.”

In a string of public Facebook posts shared this afternoon, a man named Teddy Duane claimed to be the victim in the attack and shared photos of himself in the hospital. In the comments of one of his posts, the alleged victim wrote, “I think they got all the glass out of my face.”

When pressed on why a victim might make such a claim if the video footage tells the whole story, Comer acknowledges that it is possible his cameras might have missed some activity, but that the footage he shared encompasses all of what his cameras could see.

“The assailant may have hit him with a glass that you couldn’t see on the footage,” Comer writes. “But there was definitely only one hit on our surveillance. Nothing else was captured on the footage or seen by our staff or anyone in the parking lot.”