[WATCH] Why Is A Lemur Roaming Around In Denton?!?! 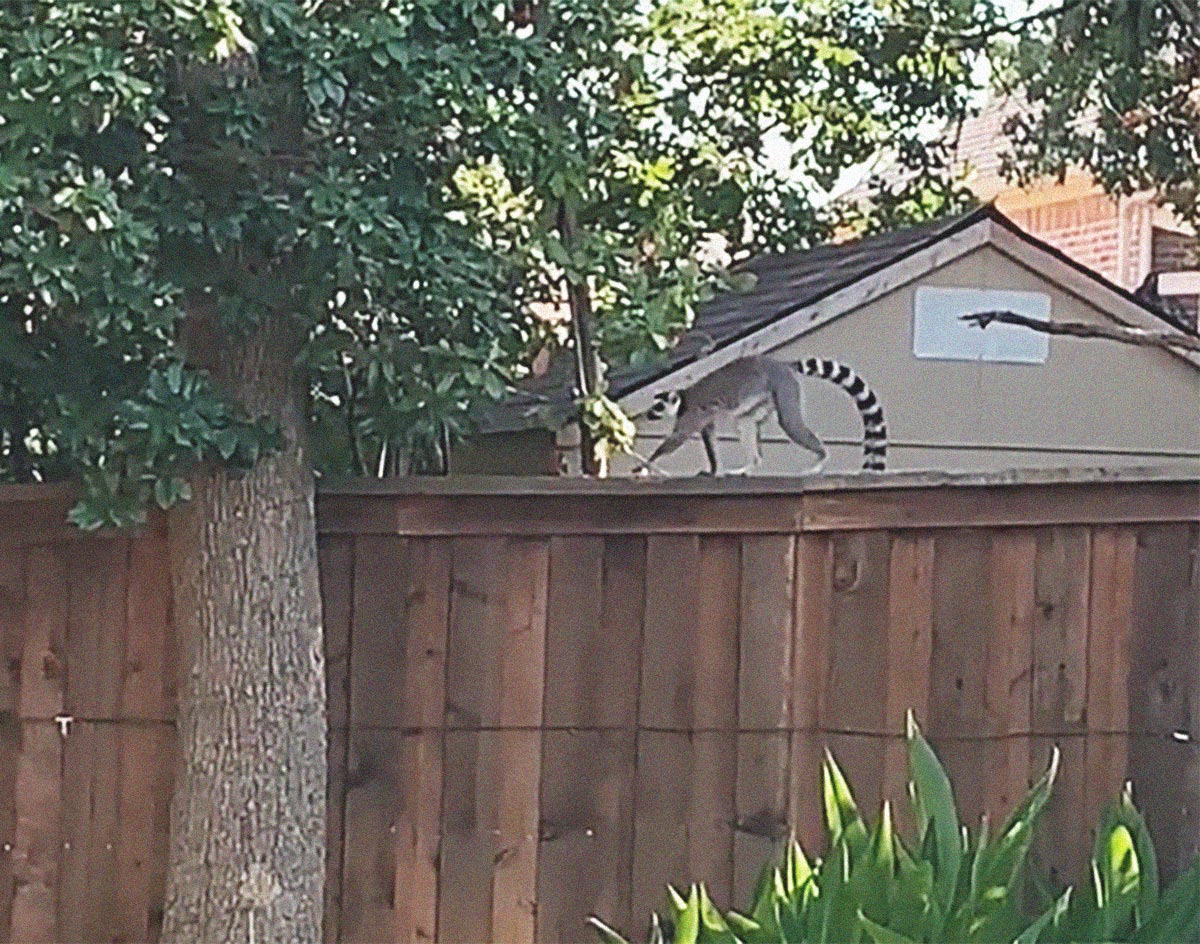 A Denton Comedian Spotted An Exotic Primate Stalking Her Backyard, So She Did What Any Sensible Person Would Do: She Captured It (On Video).

Sarah Adams was enjoying breakfast with her family one morning a few weeks back when the shaking of tree branches turned her attention to the backyard.

There, on her backyard fence in Denton, she spotted something unusual making its way past her home. It was a lemur, a primate native to Madagascar (and, uh, Madagascar) — and certainly not the sort of thing one normally sees in North Texas.

So the did what any sane person would do in this situation: She took a video of it.

“Hi. Anyone know what a LEMUR would be doing in our backyard?” she wrote in the Facebook caption she shared along with the upload she posted right around the same time she called animal control.

SEE ALSO: THIS CAT CROWD-SURFED AT A DENTON MUSIC FESTIVAL.

Naturally, the bizarre video footage has since garnered Adams a lot of media attention — a bit of a bizarre sensation for the performer who is used to getting a different kind of press.

“I’ve done a lot of film work,” Adams jokes. “But this lemur video, which wasn’t even in landscape but portrait mode? People are obsessed with. It’s been hysterical.”

Prior to gaining a local reputation as “the lemur woman,” Adams performed as an improv comic alongside her comedic partner Maggie Rieth under their The Monthly Junk moniker. Because of the pandemic, her efforts on that front have largely been put on pause.

“My financial stream is directing and acting right now,” Adams says. “Our last show [as The Monthly Junk] was on February 29 of the leap year, so maybe next leap year we’ll do another show.”

In the meantime, Adams has been keeping herself busy with film and commercial work, including producing, writing and directing a pilot for a scripted, mockumentary series she’s working on called American Weiner.

As she wraps up that work, though, we can’t help but wonder about how Adams’ other story ends. What happened to the lemur after she reported it to animal control?

SEE ALSO: HAVE YOU SEEN THE DEEP ELLUM POSSUM?

Well, Adams says she was told that her call wasn’t the first that had been submitted about the primate stalking her neighborhood. According to the animal control representatives she spoke with, it belongs to a veterinarian who lives nearby in the same neighborhood. Beyond that, though, she hasn’t heard any updates.

“I’m assuming it made it back to its owner,” Adams says. “And I hope it did because I’m not ready for another pet.”